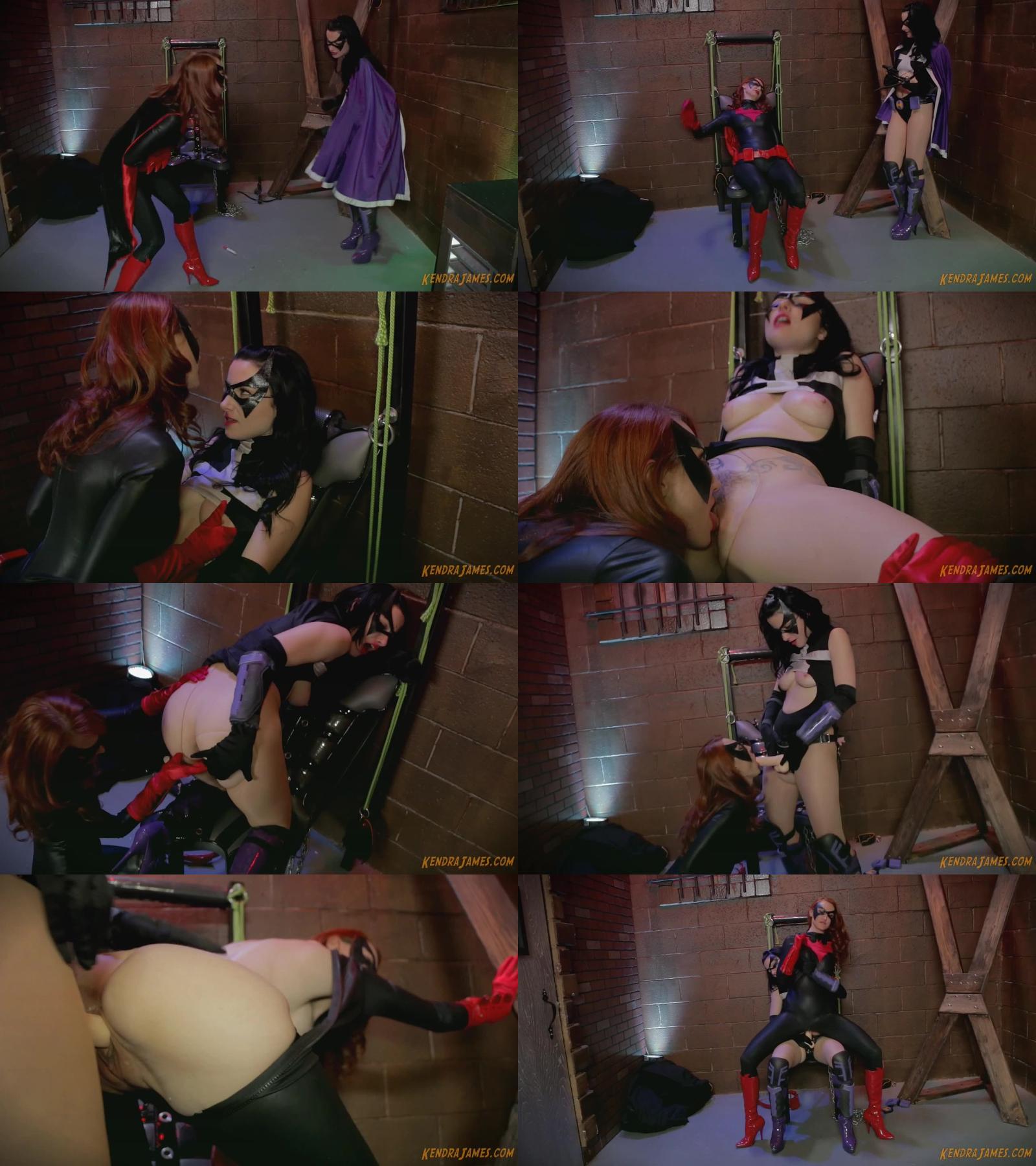 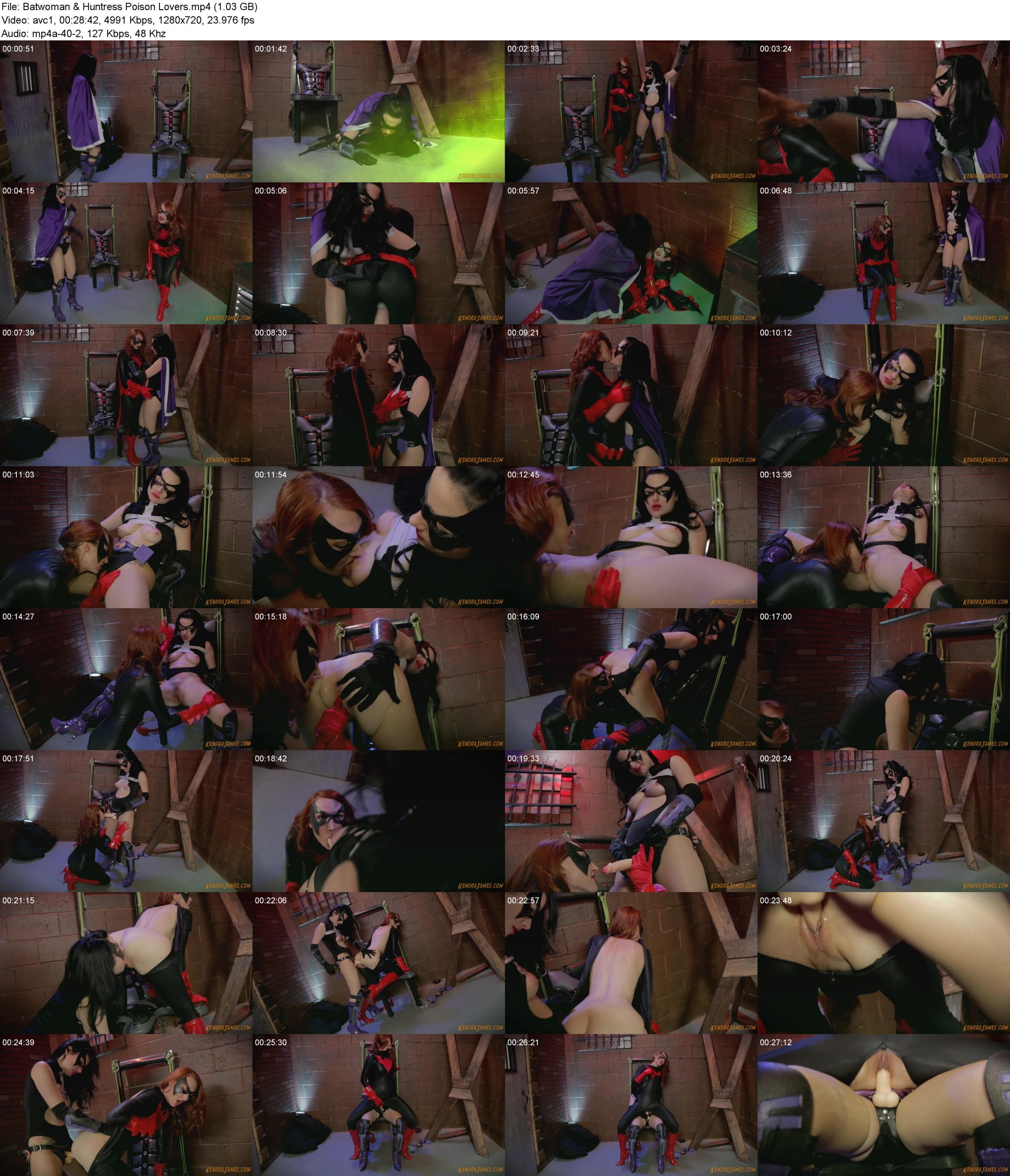 Huntress has tracked down Batgirl to an ominous building overgrown by vegetation. She makes her way down deep into the maze like castle until she finds herself in some sort of dungeon. Unfortunately the vigilante has fallen right into Poison Ivy’s trap and gas is beginning to fall from the ceiling, swirling around Huntress’ face and making it impossible for her to escape. Her lungs fill with the psychotic botanist’s seduction gas. She tries in vain to retreat from the poisonous fumes to no avail coughing and gasping for air, until finally she collapses on the floor with foam pouring from her mouth while Ivy gloats gleefully from her safe haven somewhere else in this botanical castle of doom.
When Huntress does not return shortly with Batgirl, Batwoman decides to check out the situation for herself. The detective has discovered it was Poison Ivy that Batgirl had gone after and thinks the villainous botanist may have been able to overpower both of the headstrong heroes. She approaches their last know location cautiously. As she enters the dungeon she’s shocked to see her fears have come true as her eyes focus on the limp body of the Huntress tied spread eagle to a frame with a gag shoved in her mouth. The detective quickly begins to free the distressed hero and brings her down. Batwoman starts to assess the dungeon in hopes of finding a clue as to where Ivy might be hiding and hopefully where Batgirl is too. As she turns her back, the possessed Huntress sneaks up behind her with a syringe. It seems Poison Ivy’s seduction gas is controlling her every action. Batwoman turns around just in the nick of time to catch her brainwashed friend trying to plunge a needle of Ivy’s serum deep into her neck. She catches the vigilante’s arm and the two heroes fight to gain control of the dripping needle. With a well placed punch Batwoman is able to make Huntress drop the syringe to the ground. Stunned, but not out, Huntress returns the hit with a blow to the crotch causing the bat to double over in agony. Now pissed off and ready to brawl, the equally matched heroes circle one another exchanging shots, ripping at clothing and trying to reach the needle before the other one does. Huntress finally gets Batwoman down and grabs for the serum. Before the detective can deflect it, the needle is buried deep in her jugular, seduction serum courses through her veins reaching every limb until she collapses in a heap at the vigilante’s feet.
Batwoman comes to with the uncontrollable urge to fuck the first thing she sees and that so happens to be her fellow hero Huntress. The two heroes entwine together as if they are fighting but instead of violently punching each other they are passionately clawing at each others clothes. Batwoman overpowers Huntress and lifts her skin tight costume exposing her milky white tits. Starting there the bat kisses and licks her way down until she has her friends bright pink pussy exposed. Huntress moans in pleasure while Batwoman teases the sweet crevice between her legs. This is something the two of them have always secretly wanted, but never thought would actually come true. The red bat’s finger slides slowly in and out of the glistening pussy, feeling the soft wet hole contract with pleasure. Once she feels that she has primed her enough she begins to suck at the sweet juices dripping down the heroes thighs like a honey bee sucks at a flowers sweet nectar. She buries her face deep in the her fellow hero’s cunt while the vigilante cries out in pleasure. They’ve both forgotten that Poison Ivy is somewhere getting her kicks as she watches the two of them. The sexual tension builds to a boiling point when Huntress finally finds a strap on cock hidden in the greenhouse sex dungeon. Batwoman receives Huntresses stiff member in her pussy with pleasure. This situation could not get any hotter as one hero rides the hard dick of another, grinding her pussy up and down in excitement. They both build to a massive orgasm that somehow breaks the spell of Poison Ivy’s seduction serum. Huntress is mortified when she sees she has Batwoman bouncing on her lap. She screams for the detective to get off and pushes her down. Batwoman snaps out of it and sees what she is doing. The two heroes look at each other swearing they will exact their revenge on the villainous , one vowing to make sure she never gets out of Arkham the other saying she plans of making the prison cell a little smaller and under six feet of dirt!
tags:superheroine,superheroines,lesbian domination,lezdom,story line ,storyline,forced orgasm,submission,humiliation,super hero, super heroines ,superheroines porn,superheroine porn , superheroines adult movies,superheroines fetish,magic power,magic control,fantasy,lesbian sex,lesbian porn,lesbian bondage,,lesbian strapon,spanking,lesbian bondage,slave,slavery,mistress,enslavment ,catfight,cat fight,,female fighting,ring wrestling,female wrestling,Scissors,catfighting,cat fighting,catfight fetish,catfight porn ,facesitting,mind fuck,mind control,hypnosis