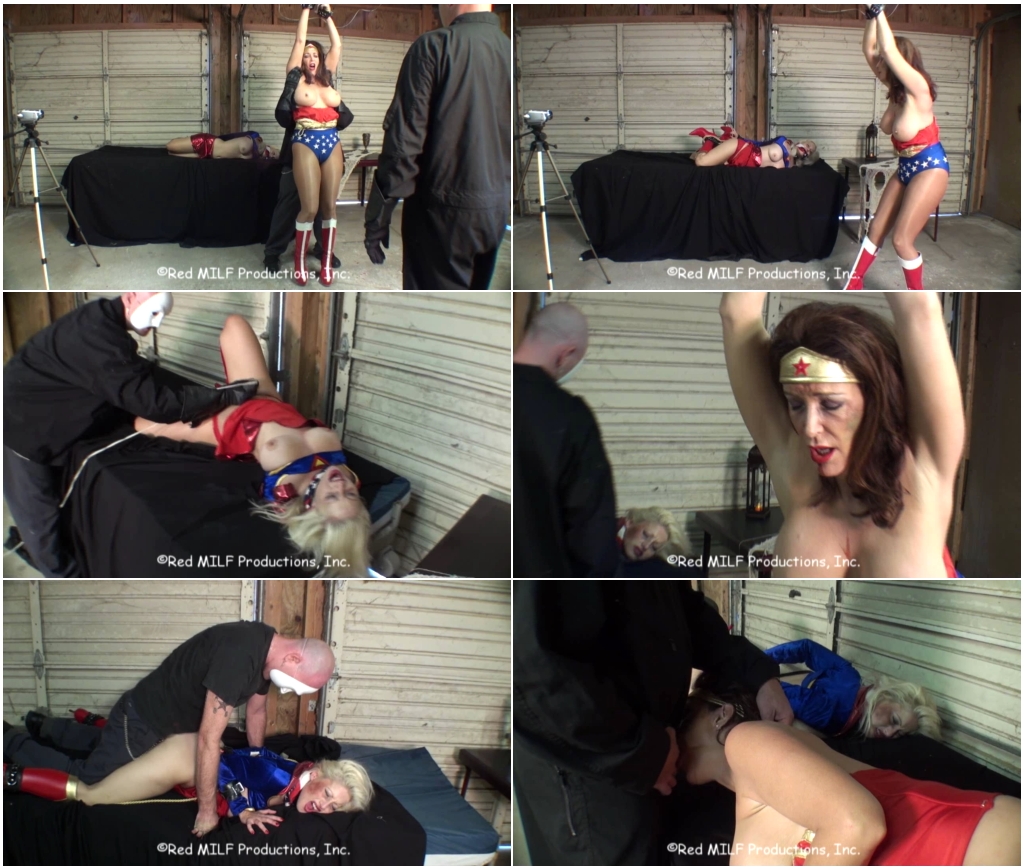 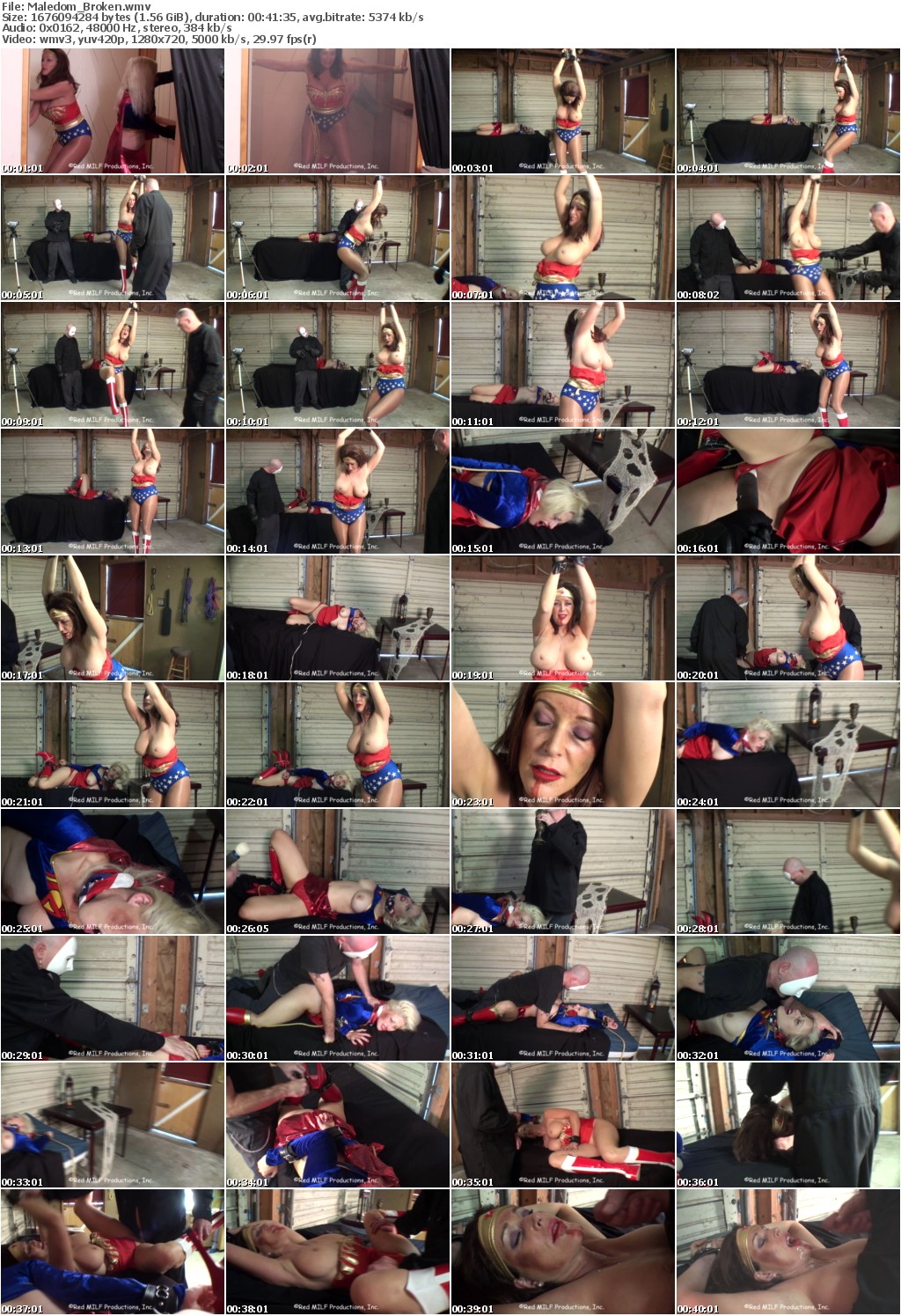 Wunder Woman and Wunder Girl are asked by the police commissioner to investigate a new evil villain. He has been snatching young women and turning them into sex slaves. Wunder Woman and Wunder Girl find his lair and go there to investigate. They enter the hideout and look for evidence of evil doers. They step into a small room and then find themselves not being able to get out. The doors have been reinforced. They will not yield to even Wunder Woman’s powerful strength. Suddenly gas starts to rise from hidden vents. The superheroines are quickly overcome by the gas and fall to the floor. Sometime later Wunder Woman wakes up in a different place. She is standing up with her hands cuffed and fastened to a chain. She does not know how long she has been there. There are no windows. As she looks around the room she sees Wunder Girl hogtied on a platform. She calls out to her but she does not respond. They have both been stripped to the waist to humiliate them. There is a video camera on a tripod recording them. The villain enters the room with his henchman. As he fondles her breasts he informs Wunder Woman that she and her sidekick are going to be sold as sex slaves. She is defiant and tells him that it will never happen. They want to break her and Wunder Girl to make them willing sex slaves. He beats Wunder Woman, punching her in the stomach and face. He punches her in the breasts. She is in pain but remains defiant. His henchman fondles the Wunder Girl as his boss continues to abuse her. dripping from her mouth, cheeks bruised, Wunder Woman tries to remain defiant. She tells him that they will never turn them into sex slaves. He leaves her to contemplate their situation for a while. They return another day. By this time Wunder Girl has awoken. Wunder Woman tells her to try to get free. Unfortunately the villains are good at binding superheroines. Wunder Woman tells her of their plan to turn them into sex slaves. They cry for help in hopes that someone will hear them. They have no idea where they are. The villains return to see if they are more compliant. The henchman turns his attention to Wunder Girl. He takes a powerful vibrator and tortures Wunder Girl. He pulls her panties open and slaps the vibrator on her little virgin pussy. The villains take turns torturing her. Wunder Woman screams for them to stop and let her go. This is all part of their plan to make them compliant. The villain resumes punching and kicking Wunder Woman. The women are weakening from lack of food and water. They beg for a drink. The villains laugh and leave them to suffer. Days later the villains return. The battered and bruised superheroines weakly struggle. They try to console each other but their resolve is slipping. They beg for water. The henchman punches Wunder Girl in the stomach and tortures her young breasts. Henchman picks up a chalice of cool water and takes a drink. He holds it up to the women’s lips but does not allow them to drink. The torture is physical and psychological. The training is taken to the next level. The henchman pulls out his cock and forces it into Wunder Girl’s mouth. She is forced to take it all the way down her throat until she gags repeatedly. He unties her feet and strips her. He forces his tongue into her pussy to wet her. He rams his cock into her virgin pussy. Now Wunder Girl has been deflowered. They are simply breaking her in for the continual fucking she will receive as a sex slave. Wunder Woman is forced to look on as her sidekick is violated. She tells her to remain strong as the henchman pounds her pussy. He shoots a load of cum in her unprotected pussy. He ties her back into the hogtie position. The villain takes Wunder Woman off the chain and strips her bottoms off. He pushes her down next to Wunder Girl and forces his cock down her throat. Like Wunder Girl she is too weak to fight back. He pushes her onto her back and forces himself between her legs. He fucks her hard with her feet in the air. Wunder Girl has no choice but to watch her mentor get brutally fucked. The villain pulls his cock out and shoots his cum all over Wunder Woman’s face. She needs to get used to this humiliation. He needs to assure his buyer that they will be accustomed to this kind of humiliation. He will make millions. He unties Wunder Girl’s feet and drags them upright. He pulls them by the hair out the door to an awaiting vehicle. It is the first time they have seen the sun in days. Will they be able to escape before they are made sex slaves?
Category: SUPERHEROINES
Related Categories: CUMSHOTS, BONDAGE SEX, FACIALS, BONDAGE, FUCKING Keywords: wonder woman, wonder girl
Tags:Maledom,Male Domination,superheroine,superheroines,Humiliation,Mixed Wrestling,Submission,froced orgasm,super hero, super heroines,superheroines porn