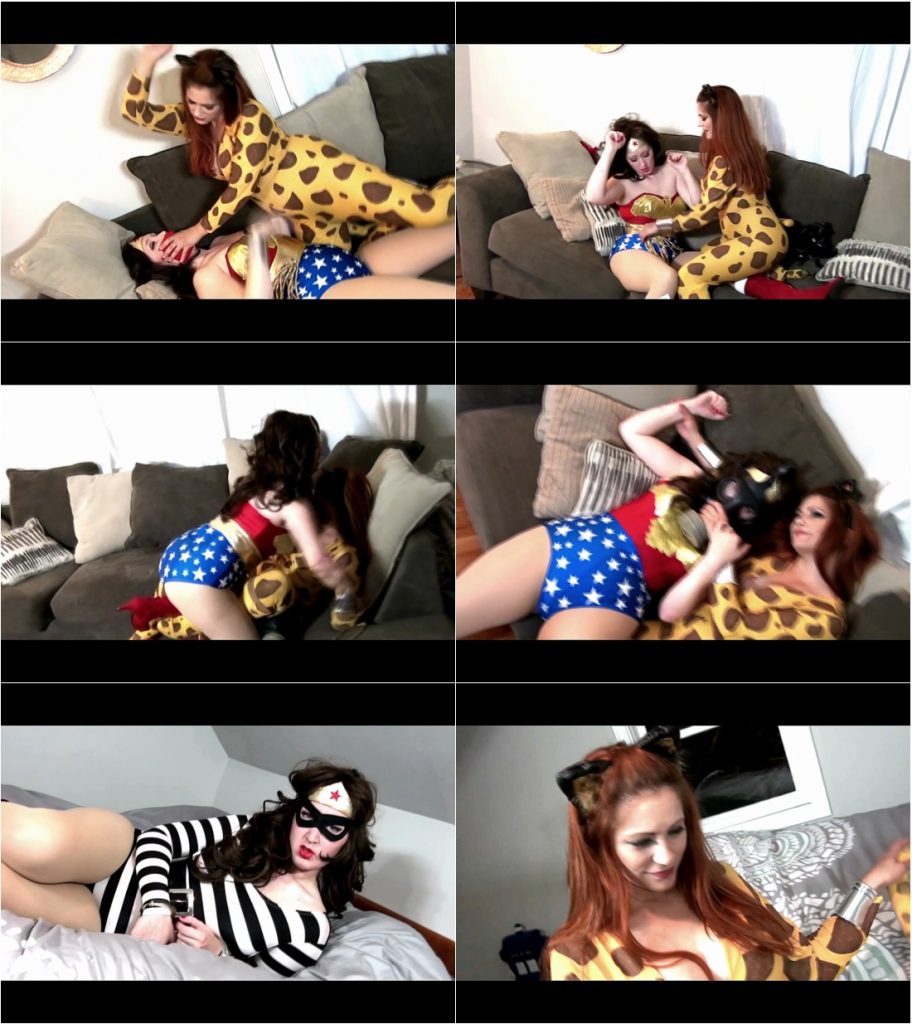 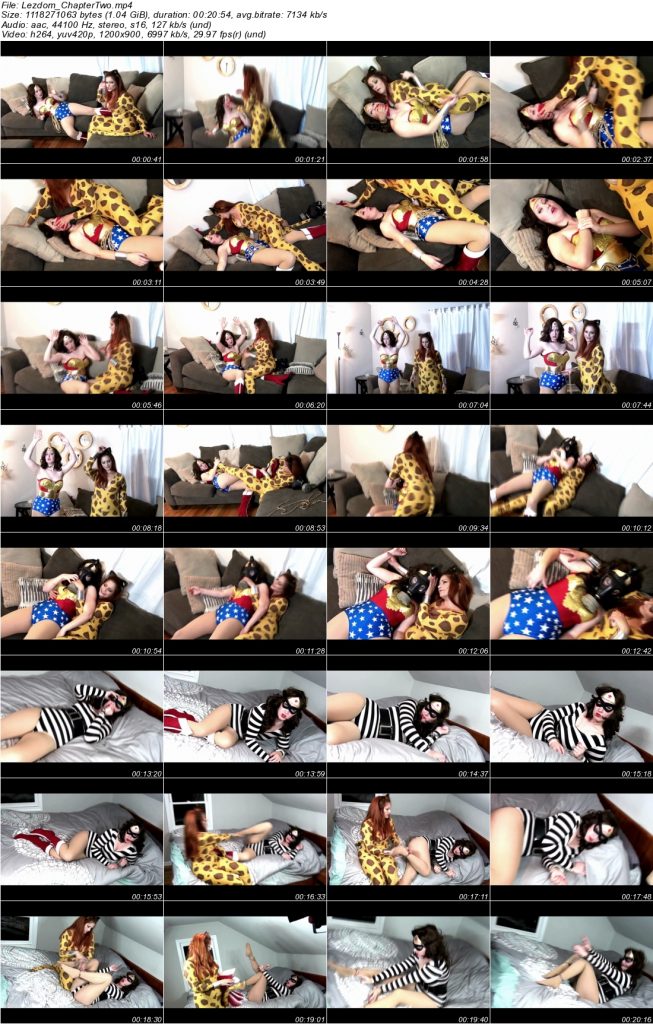 starring CLAIRE VAIL as Wonder Woman and VIVIAN IREENE PIERCE as the Cheetah
This is the first episode to feature Claire’s stunning new 1st-season ABC Wonder Woman costume! Inspired using the original pattern and bright colors used by the tv series in 1976, Claire Vail rocks as the World War II era Wonder Woman and Vivian is stunning as her 1940’s archenemy… the Cheetah!
After being kicked in the face by the Cheetah, Wonder Woman is momentarily stunned and is trying to recover. The Cheetah takes this moment of vulnerability and orders her henchman to open fire on the defenseless amazon princess! As he draws his sidearm, Wonder Woman is put in the unenviable position of being forced into defending herself from a vulnerable position on the couch. Over a dozen bullets whizz in, but Diana expertly deflects each and every one thanks to her magical bracelets! After deflecting the hail of bullets though the Cheetah jumps on the amazon while she’s still on the couch and catfights her! This harkens back to the flashback that we saw in part one of our story, except this time the fight scene between WW and the Cheetah is played out in full glorious color! The fight ends with the Cheetah clamping a damp cloth soaked in a cleaning solution into place over Wonder Woman’s nose and mouth. The feisty amazon fights off the Cheetah as best as she can, but the ether fumes soon overwhelm the beleaguered crime-fighter and soon Wonder Woman collapses in a heap. The first thing the conniving Cheetah does to her sleeping foe is snatch away WW’s magic bracelets off her wrists so that WW can’t defend herself against bullets, and on top of that she also confiscates WW’s magic lasso as well so that she doesn’t have her most powerful weapon!.
Awakening to find that her bracelets and golden lasso are missing, Wonder Woman is forced into surrendering when Cheetah’s henchman draws his .38 revolver on Wonder Woman. Defenseless against gunfire, the now-vulnerable amazon raises her hands above her head in a motion of surrender. The Cheetah uses the magic lasso to get Wonder Woman to confess truthfully to several questions, including revealing her secret identity at the War Department as Diana Prince and the fact that her golden belt is the source of all of her super-strength. Shamed beyond measure, Wonder Woman hands her head in defeat.
A moment of hope comes though when the arrogant and overconfident Cheetah removes the magic lasso off of Wonder Woman’s body and mocks her in front of the henchman. Not understanding that WW is no longer defeated as soon as the lasso is removed, Cheetah is taken by surprise when Wonder Woman (who is still missing her lasso and bracelets) attacks Cheetah and drags her down onto the couch, using Cheetah’s body as a partial shield to keep the henchman from using his .38 revolver on Wonder Woman! The heroine and villainess struggle on the couch in catfighting, until the henchman sees his chance and lunges in and tears the golden belt of strength from off of Wonder Woman’s slender waistline!
Her super-strength now gone, Wonder Woman tries to fend off the Cheetah but without her belt it’s useless! Cheetah easily dominates Wonder Woman and slaps a rubber WWII-era gas mask over Wonder Woman’s face and opens the main breather valve, flooding the inside of the mask with a powerful anesthetic! Wonder Woman accidentally gets a big lungful of the sleepy stuff and her eyes go wide as the sedative takes effect. Soon the powerless princess from paradise is defeated and dazed on the couch, her once-powerful muscles all tingly and numb now. Disoriented by the gas hissing from inside the rubber gas mask, Diana can only feebly struggle as Cheetah brings her to down to the basement and decides to enact phase two of her insidious plan.
Wonder Woman awakens hours later to find that even her colorful new costume has been taken from her (all except for her tiara and her boots) and she’s now shackled with handcuffs and dressed in the black-and-white vertical stripes of Cheetah’s old prison uniform! Cheetah reveals her master plan to commit numerous crimes utilizing Wonder Woman’s own power items and weapons, and then to pin the blame on Wonder Woman herself (who is wearing the Cheetah’s old prison uniform) and send “The Cheetah” back to prison to finish out her 50-year sentence! In a moment of final cruelty, the Cheetah takes Wonder Woman’s priceless new red leather boots with the white stripes as a final humiliation for the defeated superheroine. Since an amazon loses her willpower and resolve if defeated in battle and robbed of her boots, the barefoot and powerless superheroine does little more than tremble at this final humiliation.
This clip is for lovers of handcuff & shackle restraint, authentic cosplay, F/F catfighting, Faustaesque sleepy defeat scenarios, gas mask fetish, arms over head (AOH) poses, belt fetish (including debelting), prison uniform fetish, bracelets and bracelet removal, crotch-shots, boot fetish and debooting, pantyhose and tights fetish, masks, pantyhosed feet, magic lasso bondage and interrogation, tights fetish, catsuits and leotard fetish, big butts, hot and sexy redheads, and lots of true comicbook peril and story as you’ve come to expect.
Category: SUPERHEROINES
Related Categories: HANDCUFF AND SHACKLE FETISH, LEOTARD FETISH, CATSUITS, STRUGGLING, BIG BUTTS
Keywords: Claire Vail, Vivian Ireene Pierce, Sleepy, ABC Wonder Woman Costume, Handcuffs, Prison Uniform, AOH Arms Over Head, Bullets and Bracelets, Catsuits, Leotards, Belt Fetish Debelting, Boot Fetish Debooting, Magic Lasso Interrogation, Gas Mask, Crotch Shots
tags:superheroine,superheroines,lesbian domination,lezdom,story line ,storyline,froced orgasm,submission,humiliation,super hero, super heroines ,superheroines porn,superheroines adult movies