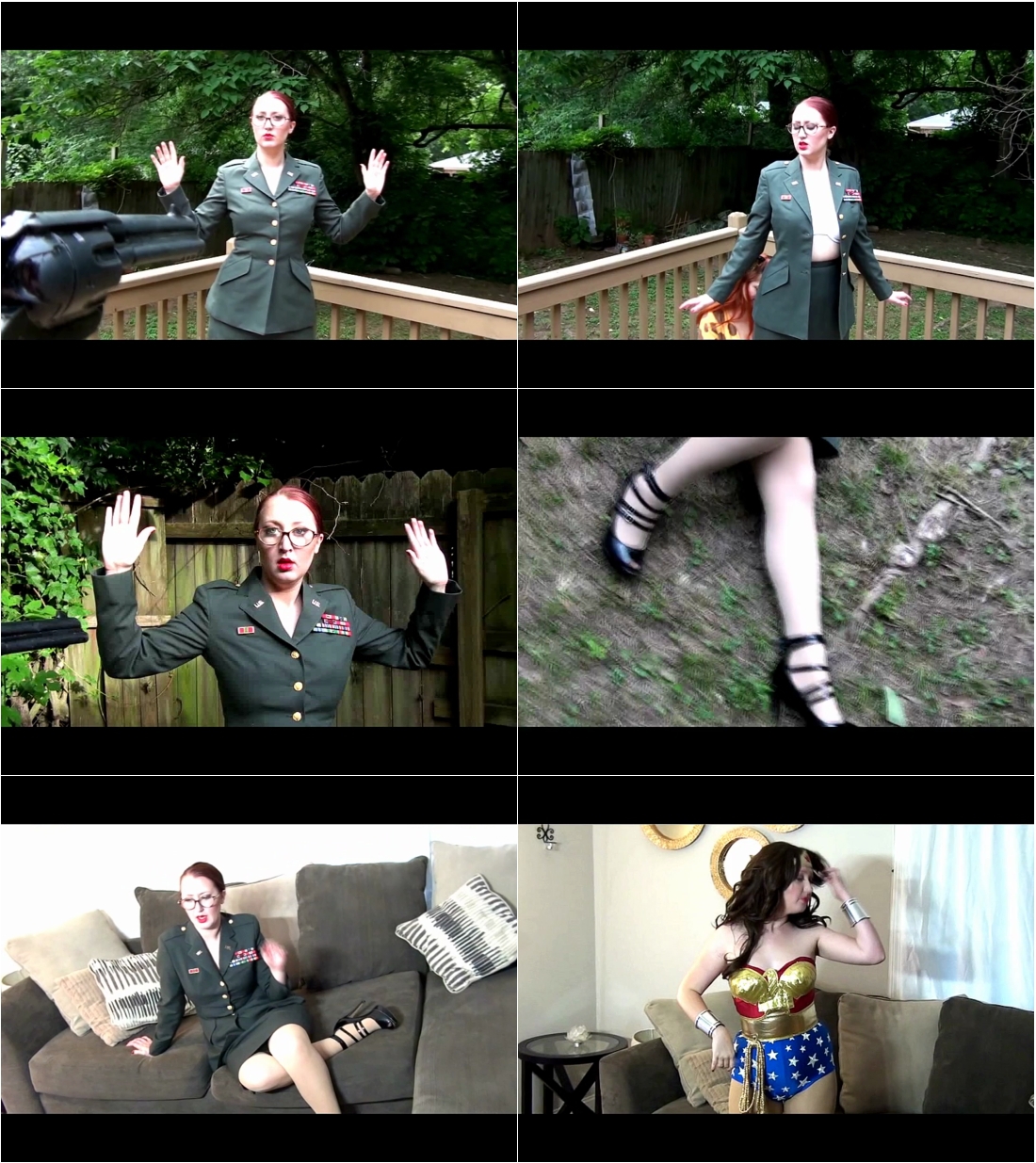 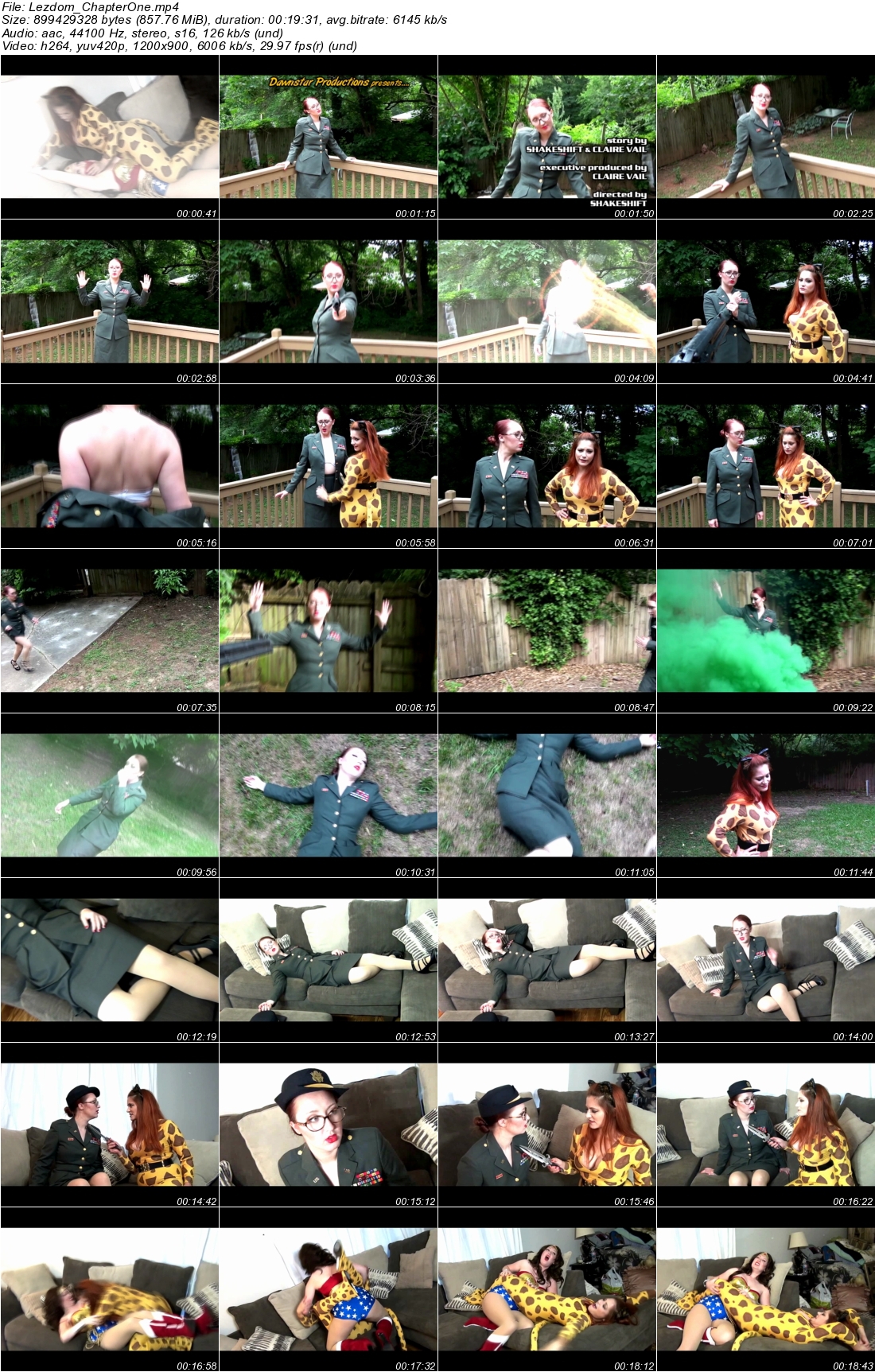 starring CLAIRE VAIL as Yeoman First Class Diana Prince / Wonder Woman and VIVIAN IREENE PIERCE as Priscilla Rich / The Cheetah
This is the first episode to feature Claire’s stunning new 1st-season ABC Wonder Woman costume! Inspired using the original pattern and bright colors used by the tv series in 1976, Claire Vail rocks as the World War II era Wonder Woman and Vivian is stunning as her 1940’s archenemy… the Cheetah!!
Our scene opens with Wonder Woman losing badly in battle to her nemesis the Cheetah and caught in an unbreakable vice-like leg-lock!. Already being overpowered and pinned against the couch, Wonder Woman struggles to overcome her adversary but without leverage her amazonian strength is useless! Unable to reach her magic lasso because of the leg-lock, Wonder Woman continues to be overpowered by her crazed opponent and when the Cheetah pulls out a damp cloth from her boot and clamps it firmly over Wonder Woman’s nose and mouth the fight is (literally) finished sixty seconds later as the potent sedative and lethargic fumes cause bedtime to unexpectedly to happen for the overwhelmed amazonian princess! As her eyelids flutter and wink out, we flash back twelve hours earlier to Yeoman First Class Diana Prince, who is up bright and early to purchase classified information back from a rogue general who is trying to profiteer from selling government secrets. As Diana confronts the “general” she realizes too late that this is a trap. As the “general” pulls his sidearm on Diana, Diana quickly draws her own .45 revolver and a standoff ensues!
As each side threatens the other with drawn sidearms, the Cheetah makes her grand appearance, knocking Diana’s service revolver out of her hand with one lightning-fast kick and shortly afterwards exposing the fact that she knows that Diana and Wonder Woman are really one and the same! Although her henchman doesn’t believe that these two could possibly be the same person, the Cheetah assures her minions that looks can be deceiving, and that underneath the despectacled, nerdy facade of Diana Prince there is indeed the immortal beauty and power of a true amazonian princess! When Diana tries to make a getaway by dashing off as fast as her short little legs will carry her, Cheetah sends her henchman to “blow her away” and bullets whizz dangerously close by Diana’s clunky frame as the enlisted flunky runs for protective shelter amidst a hail of gunfire! Finding a safe place around the corner to change into WW, Diana’s spin transformation is cut short when the Cheetah hurls two sleeping-gas grenades in Diana’s general direction and huge clouds of green-gas begin filling the whole area! Inhaling a lungful by accident, Diana quickly falls asleep and collapses to the ground, insensate! Ordering her minion to drag “Diana” back to her lair, the Cheetah smiles as Diana’s limp form (still in uniform) is carried away. When the fragile yeoman recovers many hours later, she’s horrified to discover that the Cheetah is only interested in one thing… destroying Wonder Woman once and for all! Knowing that Diana is WW’s alter ego, Cheetah insists that Diana complete the spinning transformation into her patriotic alter ego! Knowing that Priscilla becomes enraged and vicious whenever she sees WW, Diana initially refuses untiol the Cheetah reveals that she has a contingency plan in place that will harm an innocent life if Diana doesn’t go through with her spin-change and soon! Not wanting to endanger an innocent life, Diana (reluctantly) spin-changes into Wonder Woman and the Cheetah immediately attacks her in a mindless frenzied rage! As the two opponents wrestle and tussle, can even Wonder Woman stop her archenemy before she can hurt others, or possibly herself?
This clip is for lovers of cosplay-authentic WW costumes (this new outfit is gorgeous), as well as lots of fetish tropes such as sleeping gas attacks, superheroes defeated by “Faustaesque” methods involving chemicals, catfighting, struggling, outdoor locations, practical smoke effects (we used real industrial-grade smoke bombs instead of SFX) and spinning transformations (including several times when Diana attempts to transform into WW as soon as she’s out of sight but she’s stopped by either Cheetah or by her minion), and forced stripping of articles of uniforms or costumes. This clip also has slow panning shots of a defeated Diana Prince, catsuits, pantyhose/tights fetish, sexy high heels, angry bitch/beratement fetish (courtesy of the Cheetah), edged dagger play (Cheetah threatening Diana Prince), punching (Diana punching out a henchman via POV, subtle threats of insidious harm, uniform and bra fetish (Diana is forced to strip off her military jacket on camera), AOH/surrender poses (arms over head), eyeglasses fetish, blackmail fetish, uniform fantasies (Navy Yeoman First Class – WWII era), and lots of slow panning shots, cosplay appeal, and sexiness with WW and the Cheetah.
Category: SUPERHEROINES
Related Categories: TRANSFORMATION FETISH, UNIFORMS, CAT FIGHTING, STRUGGLING, BLACKMAIL FANTASY
Keywords: Claire Vail, Vivian Ireene Pierce, Catsuit, Cosplay, Belt Fetish, AOH, Sleepy, Catfighting, Struggling, Spin Transformation, Secret Identity, Military Uniform, Cheetah, Lasso, Powerless
tags:superheroine,superheroines,lesbian domination,lezdom,story line ,storyline,froced orgasm,catfight,cat fight,,female fighting,ring wrestling,female wrestling,Scissors ,submission,humiliation,super hero, super heroines ,superheroines porn,superheroines adult movies