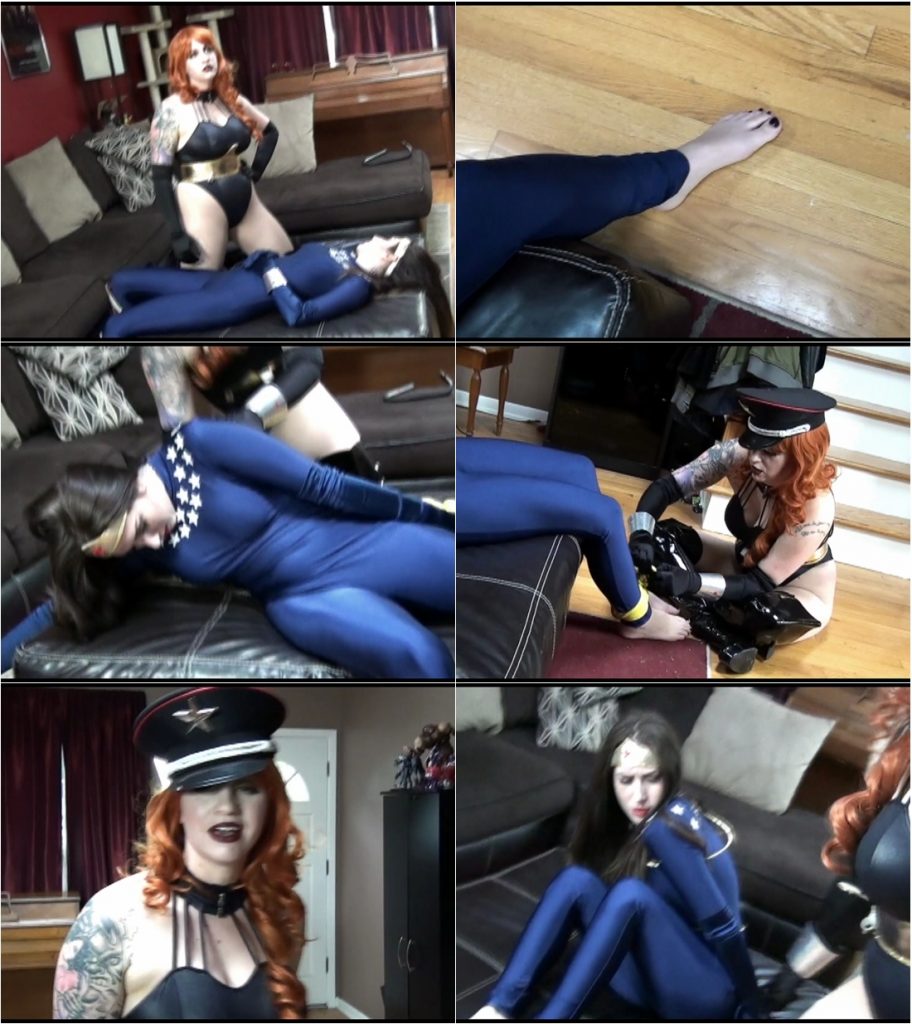 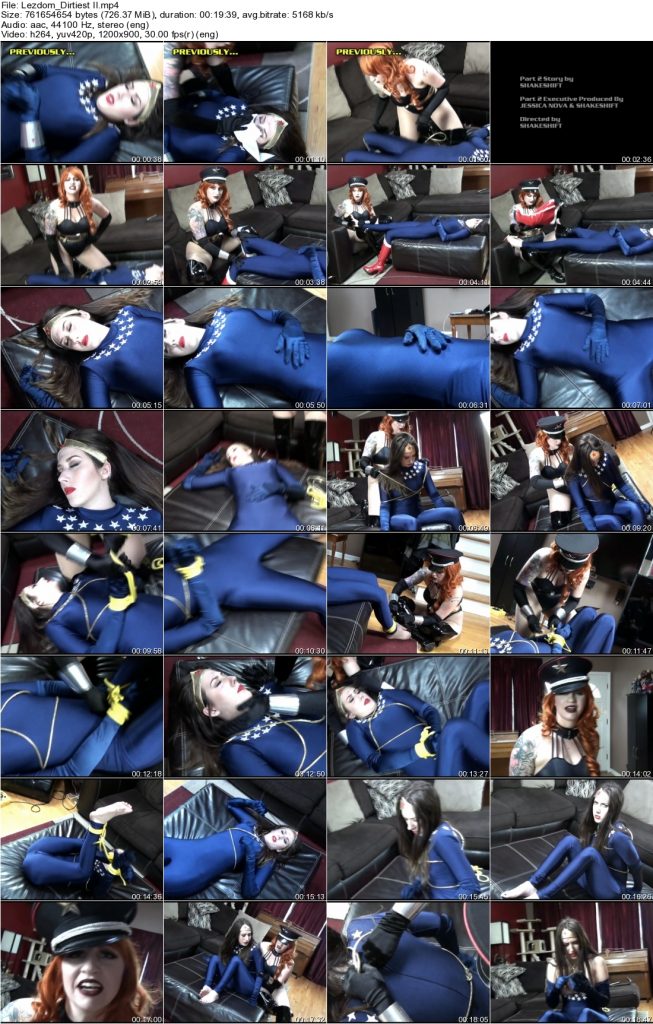 starring SOLARA as Motorcycle Blue Catsuit Wonder Woman & JESSICA NOVA as Captain Fausta VonGrables of the Deutschlande Imperial Regime for Genetic Purity. Filmed on location in June 2015 in sunny scenic Chicago!After being captured in the previous chapter and being taken out of the fight by Faustaesquian methods which robbed her of the burden of wakefulness, our chemical-weary superheroine slowly recovers her senses and opens her eyes to find herself in a state of confusion and being held as a prisoner. Still robbed of her golden power belt (which grants her super-strength) the weakened heroine finds herself bound with ropes on the ottoman while Fausta VonGrables gives instructions to her doting henchmen.Wonder Woman tries breaking the ropes but without her super-strength it proves pointless. Fausta also confiscates WW’s magic feminum bracelets as well to make her defenseless and to add insult to injury she also dons all of Diana’s power items to give herself the strength and energy that WW once possessed! Trying to reason with Fausta proves pointless, but the barely-functioning amazon princess can do little but groan feebly as Fausta also strips Wonder Woman of her shiny red-and-white motorcycle boots and exposes her bare feet! Commenting on Wonder Woman’s horrible foot odor, Fausta mocks the superheroine’s stinky boots as she slides each stiletto-heeled boot off of her legs.Left alone and weaponless, Wonder Woman lies prone and defenseless on the couch as the camera slowly pans over every inch of her blue-catsuited body, lingering over her crotch and other private areas, stopping periodically over her bare feet and her gigantic breasts for emphasis. When Fausta returns (still wearing WW’s power items) the nasty German soldier wastes no time in using WW’s own magic lasso to ‘leash’ the amazon princess in a cross-frame piece of rope bondage over Diana’s breasts! As Fausta starts criss-crossing WW’s breasts with the lasso, Diana feels her willpower weaken and fade as she’s tied up with her own weapon of justice. To further complicate things Fausta also binds her captive with rope as well, making escape all but impossible by putting her in a front-facing hogtie. Interrogating WW with her own lasso, WW is forced to admit under the lasso’s magic that she’s scared, that she has no immediate escape plan, but that she will never stop trying to find a way to escape. This pleases Fausta, who enjoys WW’s periodic attempts to escape as good practice for her and her men.The scene ends with Fausta’s henchman trying to make a deal with WW to exchange her freedom for exposing herself to all of Fausta’s henchmen for cheap thrills. Fausta however comes back into the room and catches her henchpeople trying to broker the deal. Screaming and castigating them out of the room, Fausta unzips WW’s famous motorcycle catsuit and takes a peek at WW’s magnificent 36DD breasts, which are as beautiful and perfect as she’s been led to believe. Satisfied at last, Fausta leaves the room with WW still bound and held as a prisoner. can WW escape and find a way to get her power items returned back to her, or will she remain as a prisoner of the Fourth Reich and be forced into a life of slavery working for Fausta and the rest of her minions as a powerless prisoner? Tune in, and find out!This clip is for lovers of onscreen tying and lots of rope and magic lasso bondage. There is a front-facing hogtie, breast bondage (criss-cross rope bondage over the breasts, non-stringent.) There is also topless nudity, struggling, debooting and boot removal, powerlessness scenarios, catsuit fetish, sleepy scenarios, leotard fetish, cosplay peril, belt fetish, forcible stripping, bracelet snatching (with Fausta putting them on her own wrists), bare feet fetish, stinky foot fetish, slow panning shots over WW’s helpless body, and lots of dialogue between Fausta and WW of a flirtatious nature underlining the sexual tension between heroine and villain.
Category: SUPERHEROINES
Related Categories: BONDAGE, FORCED STRIPPING, STRUGGLING, CATSUITS, BOOT FETISH
Keywords: solara, jessica nova, boot removal, stinky feet, belt removal, catsuit, struggling, forced stripping, bondage, front-facing hogtie, magic lasso interrogation, topless, powerless, helpless, prisoner
tags:superheroine,superheroines,lesbian domination,lezdom,story line ,storyline,froced orgasm,submission,humiliation,super hero, super heroines ,superheroines porn,superheroines adult movies