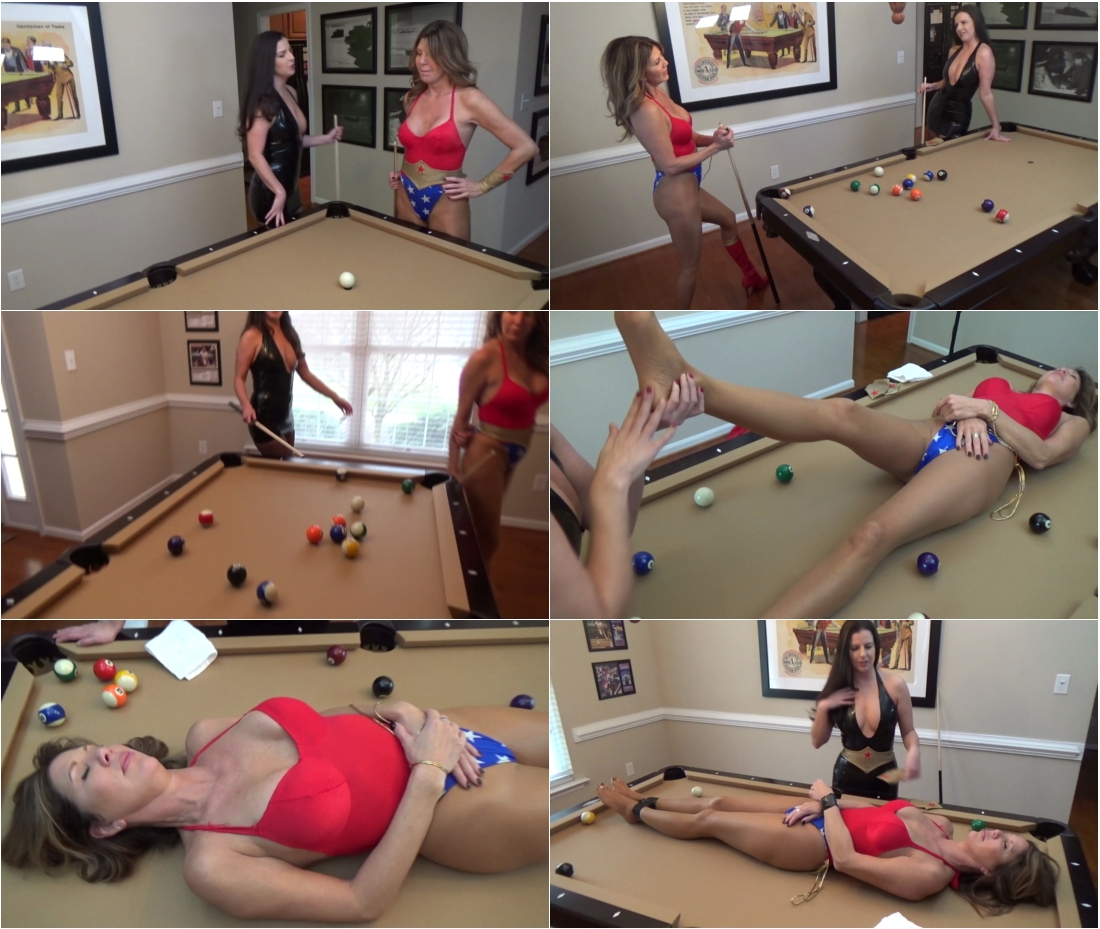 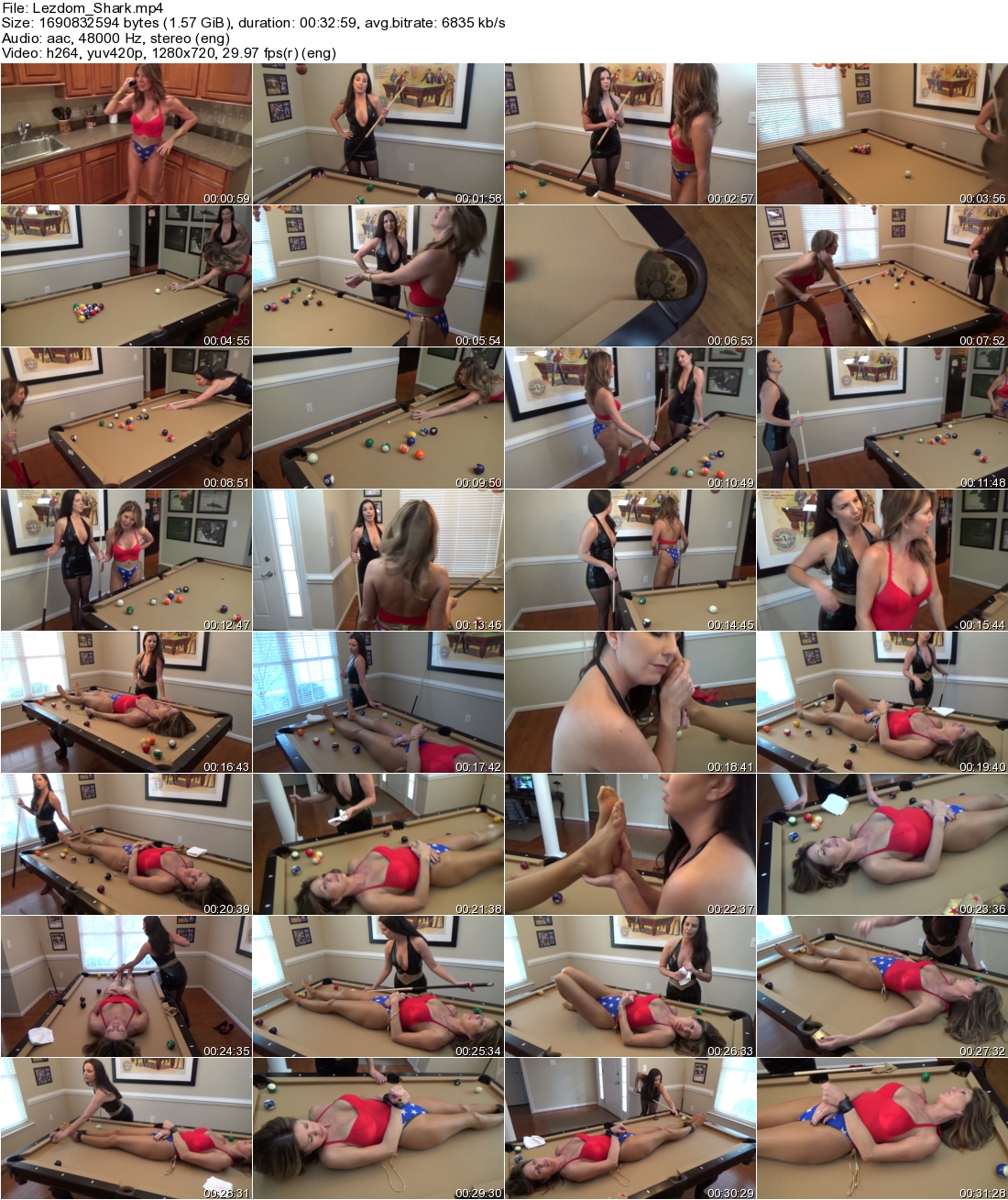 Here is a sexy new Wonder Womyn adventure featuring Hollywood as WW and Kobe Lee as the evil “Shark,” a notorious billiards hustler who uses it as a guise to capture and enslave sexy ladies. As we see from the opening, Wonder Womyn has been alerted about the evil pool hustler, and decides to pay her a visit. Walking into the Shark’s evil billiards den, Wonder Womyn confronts her. The Shark (Kobe) is wearing a sexy black latex dress, letting the world know she’s naughty and certainly up to no good. It’s quite obvious that the Shark is involved in criminal activity, but she’s not informing Wonder Womyn about it. WW finds various pieces of evidence against her but the Shark isn’t talking. The only way she’ll give up the information that WW is looking for is for WW to agree to play a game of pool. For every shot that WW makes, the Shark will reveal an honest answer to a question posed to her. But for every shot that she makes (or WW misses), Wonder Womyn has to REMOVE A PIECE OF CLOTHING or EQUIPMENT. The ladies begin to play the game, and from the start it’s QUITE OBVIOUS that the Shark is a dirty rotten cheater, using manipulation to make WW miss her shots. Wonder Womyn is reluctant to hand over any clothing items, but as per the rules, she has to. During the match, the Shark reveals some information to WW as well, keeping her motivated to continue the game. First Wonder Womyn hands over her MAGIC BRACELETS. Then her BOOTS ARE REMOVED and turned over. Finally, Wonder Womyn loses and must turn over her belt, but she refuses to do so, realizing that without it she’ll be powerless. The Shark gives her an option – if the Shark can make an impossible shot, she has to turn over the belt. WW agrees, knowing the Shark will never make the shot. But lo and behold, the Shark MAKES IT! WW is forced to turn over her belt. We see the Shark PUT ON WW’s MAGIC BELT. As a prize, she allows WW to ask another question – but WW isn’t going to like the answer! It seems everything was a setup to get WW into a compromised position, as she’s put out in the end, completely out in the hands of the evil Shark! We now open with Wonder Womyn (Hollywood) completely out, laid out on the billiards table, as the Shark (Kobe Lee) – still wearing Wonder Womyn’s magic belt, has her evil plan fully realized. The Shark circles Wonder Womyn’s helpless body on the table, enjoying having complete power over her (binding WW’s hands with her lasso). We watch as the Shark FONDLES and WORSHIPS Wonder Womyn’s perfect superheroine feet, as well as having fun by trying to shoot some balls around Wonder Womyn’s body. Wonder Womyn wakes up multiple times throughout the scene, only to have the Shark use something to put her back out each after a struggle. The Shark BINDS WW’s hands and feet together with TAPE, making her even more of a damsel – in the end, the Shark talks about how she’s going to have so much fun with WW – it appears that Wonder Womyn will now be sex slave plaything for the rest of her days.
Category: DAMSEL IN DISTRESS
tags:superheroine,superheroines,lesbian domination,lezdom,story line ,storyline,froced orgasm,submission,humiliation,super hero, super heroines ,superheroines porn,superheroines adult movies,Wonder Womyn,wonder woman