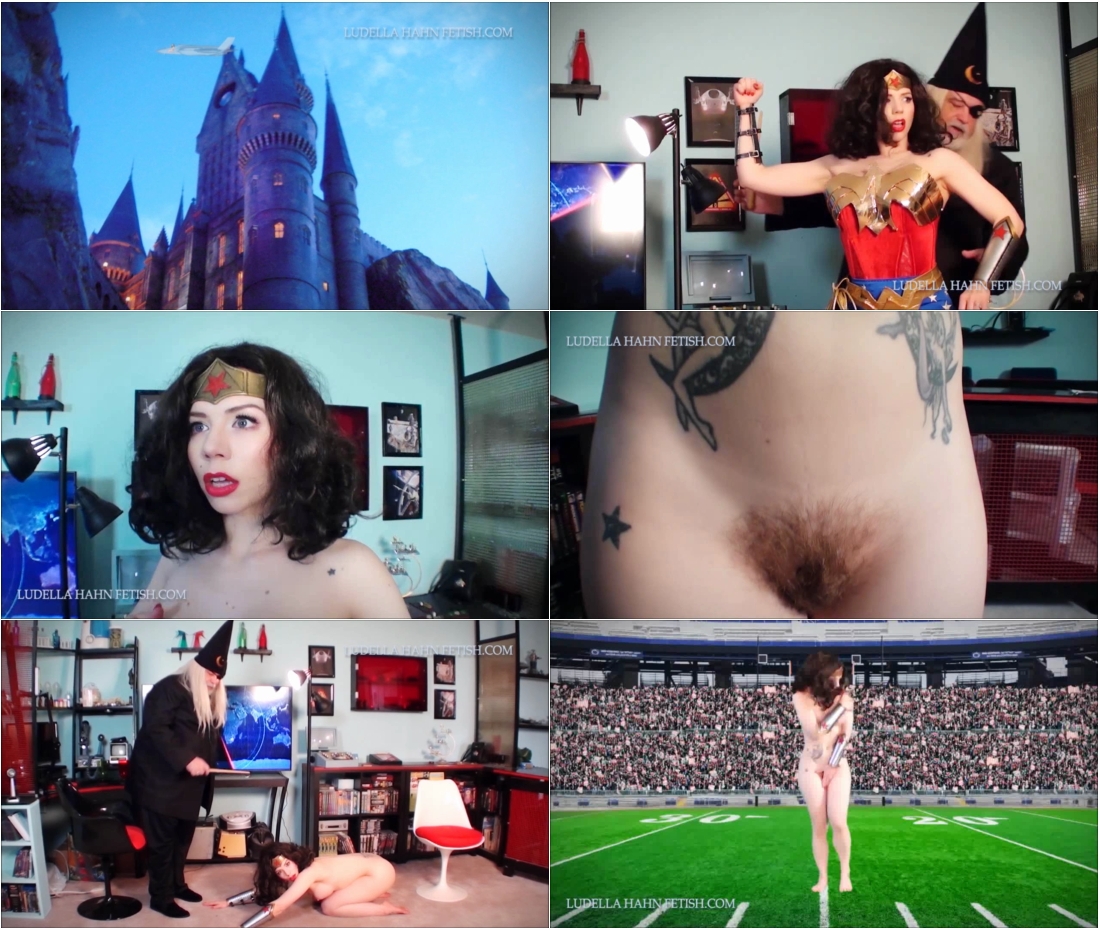 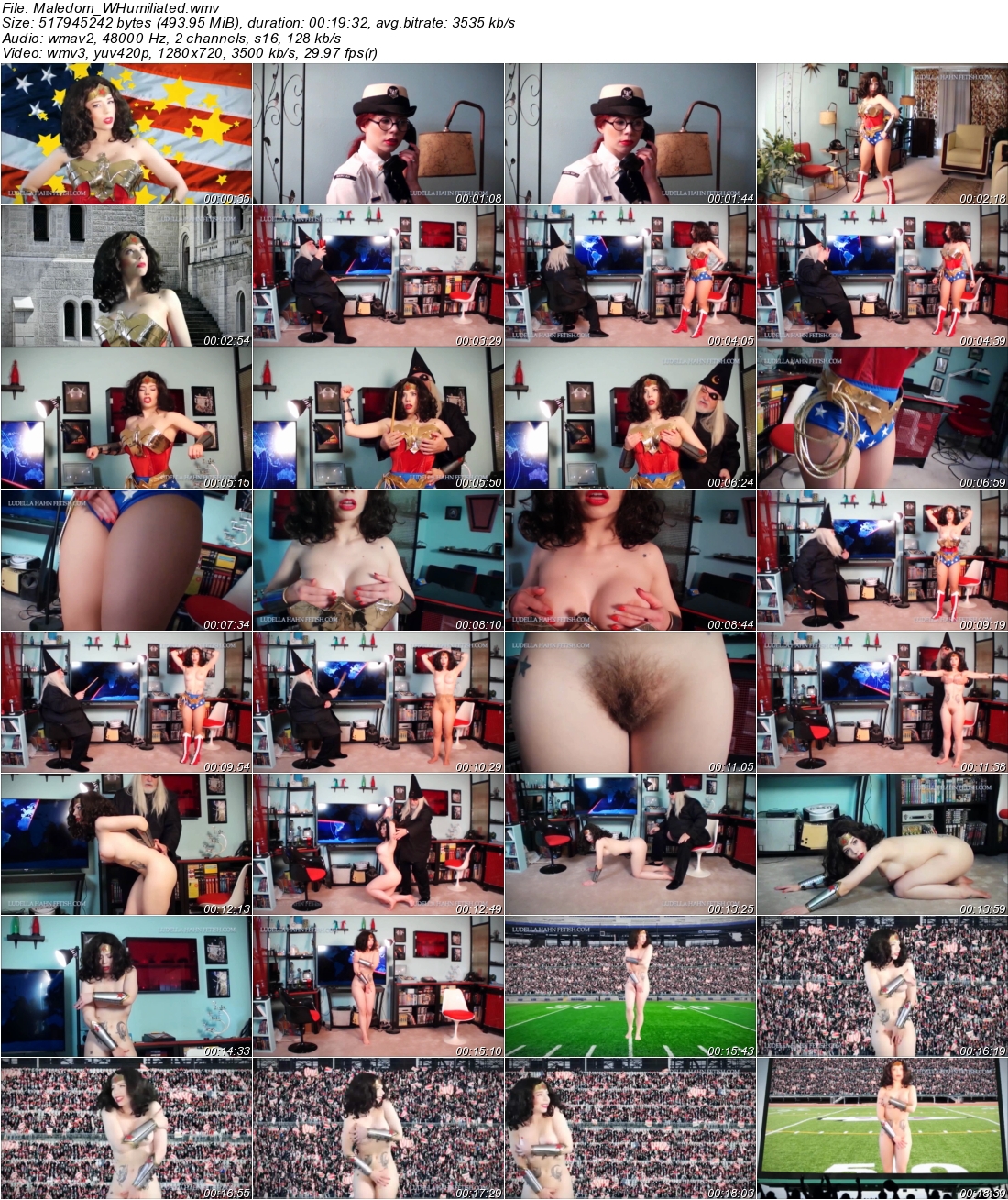 Clip Includes: Wonder Woman Parody, Superheroines, SFX, The Wizard, Magic Control, Woman Following Orders, Freeze, Body Pans, Limb manipulation, Clothes Zapping, ENF, Embarrassment, Cosplay, Perils, Costume, De-booted, Pantyhose, Tit Play, Big Tits, Full Bush, Ludella Hahn; Contains FULL NUDITY – An AR Tiste Collaboration
Diana Prince receives a call in search of Wonder Hahn. The Wizard is up to his old tricks and someone needs to stop him. After transforming into Wonder Hahn, she boards her invisible jet to track down that dreadful Wizard.
When she arrives, the Wizard isn’t put off at all. In fact, he even cracks jokes at her expense, in regards to her being female, which she does not take lightly. Before she has a chance to bring him to justice, he casts a spell that freezes her legs in place. She can move her top half, but her feet stay firmly planted. “Why can’t I move?” She demands, but he simply increases the freezing power so that it travels further up her body. Now her upper half is freezing and she watches in horror as the Wizard manipulates her limbs, before freezing her completely like a doll. She stares blankly ahead, unblinking.
This Wonder Hahn doll is very special though as it still obeys orders from the Wizard even in its frozen state. The Wizard pulls down her armor to reveal her big tits and with the wave of his wand he makes her play with her nipples. She entirely frozen except for the fingers pinching and playing with her nipples, which he of course gets great joy from witnessing.
He decides he has a bit of time for a little fun, so he makes her clothes disappear one by one until she’s completely naked (outside of her tiara and gauntlets…as he wants to make sure she’s still recognizable for his master plan). Once she’s naked, he poses her into different humiliating positions, bending her over and jiggling her big butt, manipulating her to dance before turning her into a doggy style foot rest. He poses her to beg and to assume the submissive kneel before he wakes her from his spell to find herself completely NAKED….and humiliated…. BUT, it’s not as humiliating to be naked in front of him alone as it is in front of a massive crowd, so to put the icing on the cake he transports her into the middle of a football field for HALFTIME! She’s utterly horrified and embarrassed beyond belief as the announcer makes her presence aware to THOUSANDS in attendence–not to mention everyone watching from home!
She squirms and tries to hide herself, but she can be seen from all angles. She finally runs to a yardline sign to cover her front parts she she can think of a plan. “I can’t exactly take my INVISIBLE jet out of this one…maybe I should just run for it…?’ She ponders, but a football knocks down the sign, leaving her vulnerable again….and that’s when the papparazi jumps all over this rare opportunity to have Wonder Hahn BARE it all. Their cameras flash to capture the face of Wonder Hahn’s Halftime Humiliation.
Category: SUPERHEROINES
Related Categories: EMBARRASSED NAKED FEMALE, COSPLAY, FREEZE, MAGIC CONTROL, EMBARRASSMENT
Keywords: supergirl parody, super girl, special fx, cosplay, sandman, sleepy dust, sleepy, eyecrossing, stripped, blonde, magic control, ko, ludella hahn, debooted, obedient slave
Tags:Maledom,Male Domination,superheroine,superheroines,Humiliation,storyline,story line,Mixed Wrestling,mixed fight,Submission,froced orgasm,super hero, super heroines,superheroines porn,superheroines adult movies