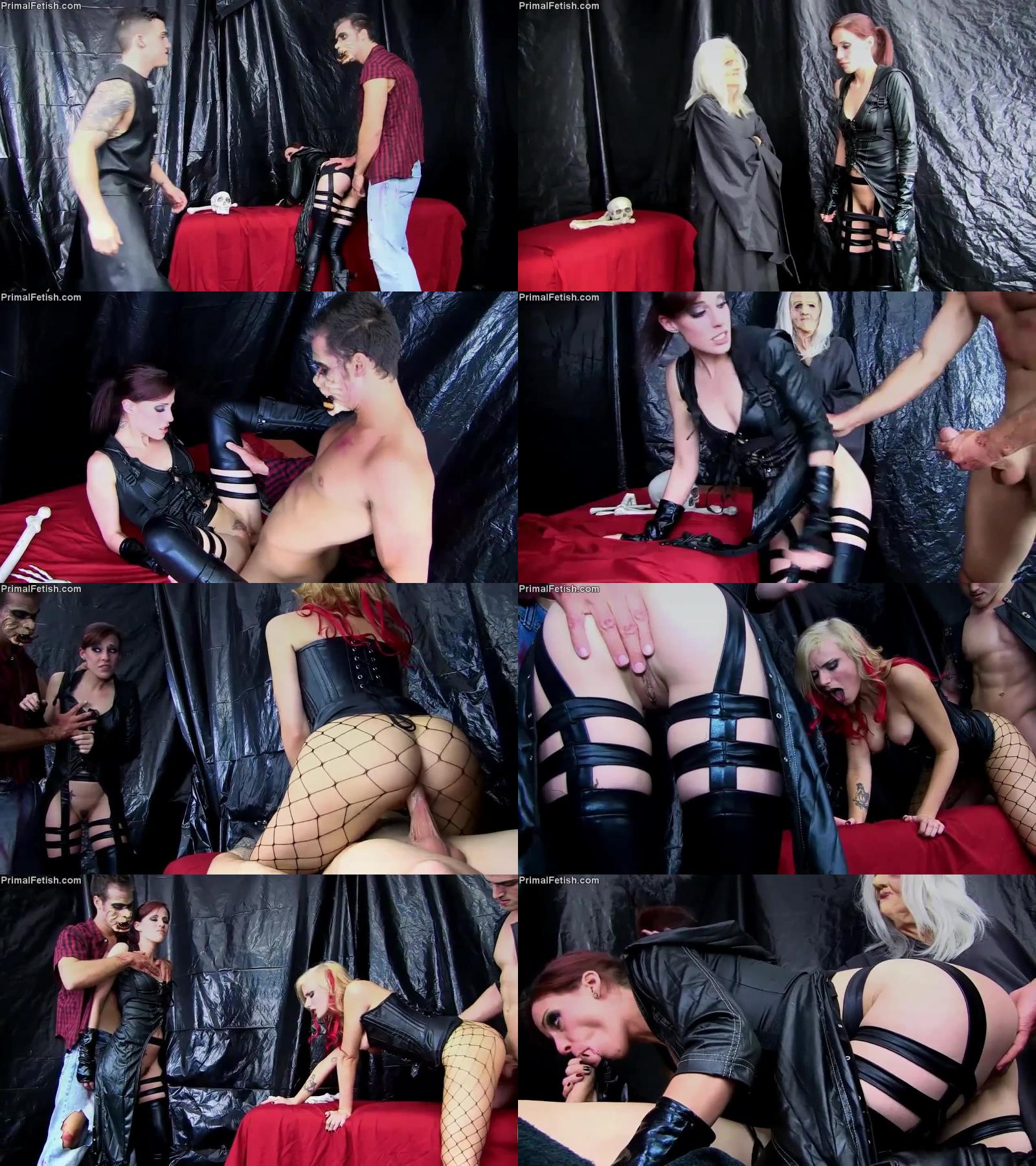 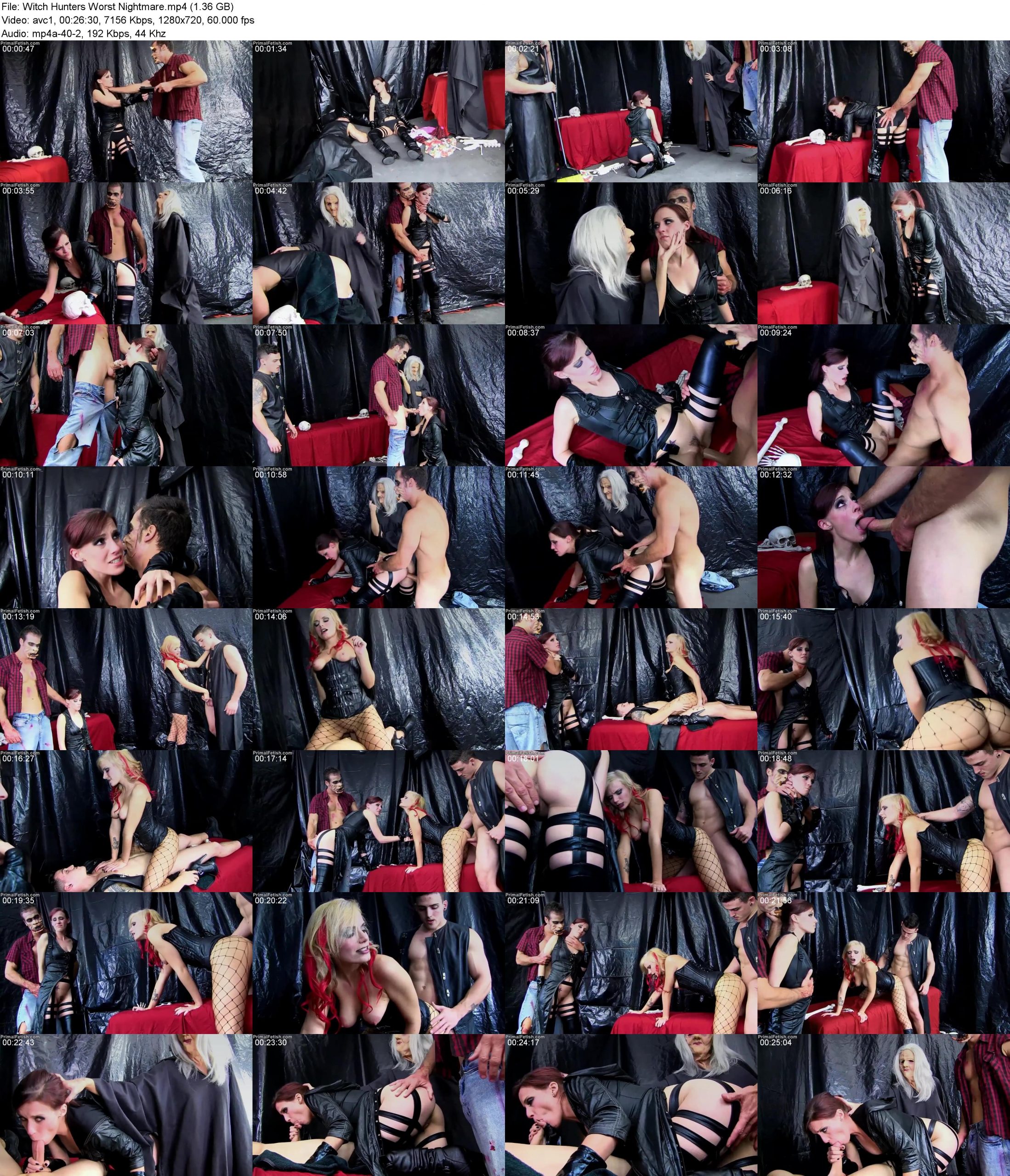 Hansel & Gretel are on a mission to locate and destroy a very evil witch and her perverse ogre minion. They follow a trail of candy and cautiously enter witch’s abode.

Gretel- Be careful Hansel, this witch is very dangerous.

They bump, check their weapons and then enter the witch’s liar. After looking around and finding bones and discarded clothing they are ambushed by the witches helper, Ogre. Ogre quickly knocks out Hansel with a blow from behind. Gretel engages Ogre in a brief fight but she quickly loses her weapon and succumbs to Ogre’s body blows before being choked .

When H&G awake they are weaponless and are confronted by the hideous witch and her ogre minion.

Witch- Hello my pretties, I knew you would be coming. Your just in time for dinner! Cackles loudly. Don’t try and leave before the feast. You are under a spell that prevents you from leaving my liar. I have removed your weapons and my handsome pet Ogre will you slowly and eat you if you don’t do as your told.

H&G make a bolt for the door but both receive a painful shock from the witches spell and fall to the ground. Ogre then drags them back to the witch.

Witch- You two brats have been very naughty and won’t get any candy until you finish your chores.H&G are then made to perform tedious chores while the hideous witch torments and laughs at their foolish attempt to track her down and destroy her. As H&G sweep the floor and do chores the witch scolds them.

Witch- You worthless brats. You aren’t even good servants let alone witch-hunters. Your going to clean every inch of my filthy kitchen and get the preparations for tonight’s feast ready.

With this, she cackles loudly and Ogre LICKS his lips.

Witch- This Ogre is my personal butcher and he just loves young fresh meat. I can tell he is really going to like you two.

H&G perform chores reluctantly but remain defiant during the witch’s incessant taunting. After a few minutes, the witch feels that H&G are not working to her satisfaction.

Witch- You brats lack discipline and humility. I’m going to teach you lazy brats a lesson in respect that your deadbeat parents obviously failed to do. And if you don’t obey me exactly, I will have Ogre rip you both to shreds where you stand and dinner will be served early and without a proper cooking.

Witch- Your both going to get a good hard spanking on your bare bottoms. I think this is long overdo for you two spoiled brats.

Gretel and Hansel look at each other in horrified disbelief.

Witch- You first young lady, I believe your the instigator of this witch-hunting foolhardiness so you need to be made an example of. Pull down your britches and your panties and get over my lap. Don’t be embarrassed, we are all family here.

Witch pulls Gretel closer by her ear. Gretel then pulls her pants down very reluctantly and defiantly slowly exposing her bare bottom.

Gretel- You better get your sick kicks now because soon I will soon see you burn.

The witch laughs and begins to spank Gretel. While Gretel is being spanked, Ogre grows visibly excited at the site of Gretel’s bare ass. This bothers Hansel.

Hansel- Look away you wretched beast.

But Ogre only punches Hansel in the gut. Witch laughs.

Witch- Hansel have you ever seen your sister’s bare ass before? Hansel looks away, embarrassed for Gretel. Gretel is embarrassed as well.

Gretel-Let us go you sick bitch!

Witch- If your parents had spanked you more than perhaps you wouldn’t have become such despicable worthless witch-hunters.

After witch is finished spanking Gretel she tells Hansel it is his turn to get over her knee and she grabs his ear and pulls him closer. Witch slowly removes his pants. Hansel looks at Gretel for direction.

Gretel-Just do it Hansel and get it over with. Hansel allows witch to pull down his pants.

Witch- Did you enjoy watching your big sister get her bare bottom spanked?

As Hansel is getting spanked, the witch observes that Hansel has a nice package and she seems to get excited much to the disgust of Gretel.

Witch-mmmmm, what have we here. I think you may be enjoying your punishment. I may have further use for you Hansel.

After both H&G are well spanked, the witch orders Gretel to start preparing the stew and orders Hansel to help Ogre cut up some meat. Gretel is still indignant and refuses.

Gretel- You have humiliated us enough. We will not help your prepare for our deaths or the deaths of others. I demand that you release us now. There are other witch-hunters close by as we speak and they are looking for us right now.

Witch- Oh, you poor deluded dear. No one is looking for you young lady. No one knows your here and no one even cares. Only me and my handsome Ogre know your here. Cackles. Clearly, you and your brother haven’t yet learned your lesson lesson and are still very much in need of discipline. I think I want to have some real fun with you before we eat you..

Gretel defiantly refuses. Witch makes Hansel immobile with a spell and orders Ogre to beat a helpless Hansel until Gretel complies. Gretel finally reluctantly complies and removes her pants. Ogre gets excited at the sight of the half nude Gretel again.

Witch- Gretel, make my poor Ogre happy and suck his huge cock. It would make him so very happy. He does so love the pretty young things and they never give him the time of day.

Witch- Gretel, get on your hands and knees and bow before me.

Hansel- No, Gretel don’t do it.

Hansel protests loudly but cannot move. As Gretel is on her hands and knees before the witch, Ogre gets down behind Gretel and mounts her and proceeds to start fucking her forcefully. Gretel is obviously totally disgusted and pained by this.

Witch- Oh stop pretending you don’t like Ogre’s huge cock. Your going to hurt his feelings Gretel. Show some enthusiasm.

Witch- Well, Hansel, now that your sister had her fun its time for you.

Witch- Do you like this Hansel? This is how I used to look centuries ago.

She looks at him seductively and kisses him and begins to stroke his dick. He gets hard despite himself.

Gretel approaches Hansel and disgustedly begins to jerk him off while looking away from him.

Witch- No Gretel, use your mouth. I want you to taste him…. And me…Cackles…

Witch- Ok, boys and girls. The fun is over. Put your clothes back on and finish doing the preparations for tonight’s feast.