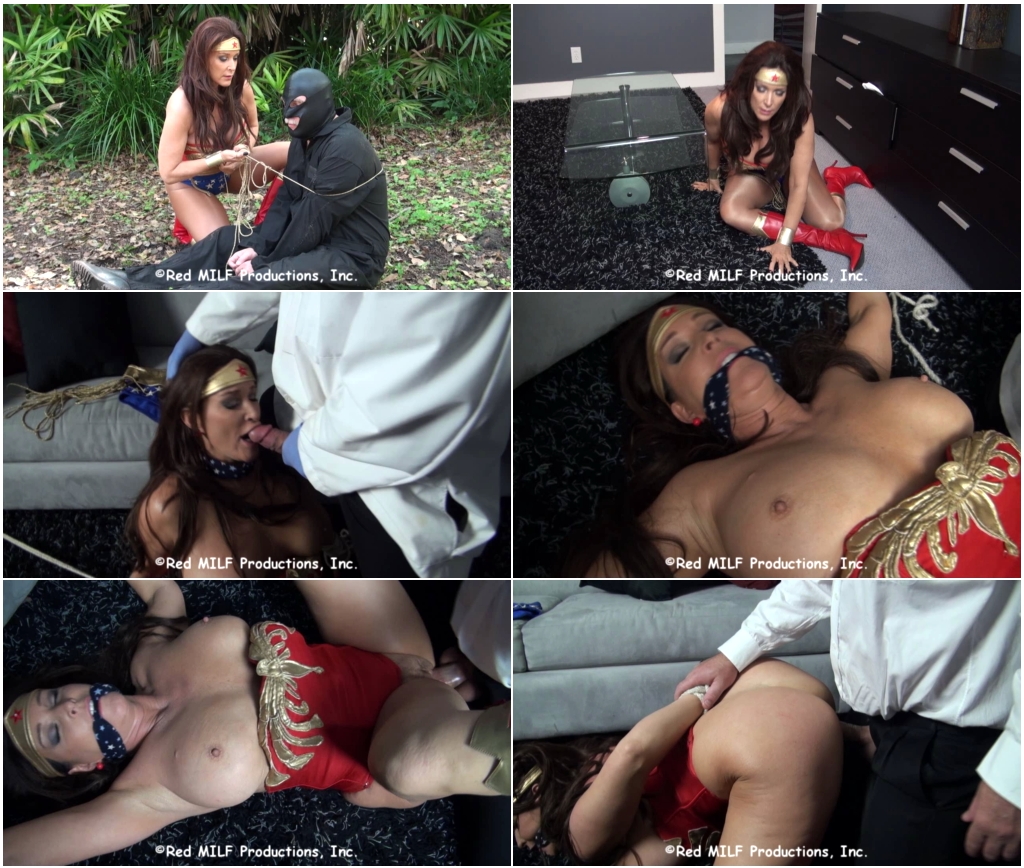 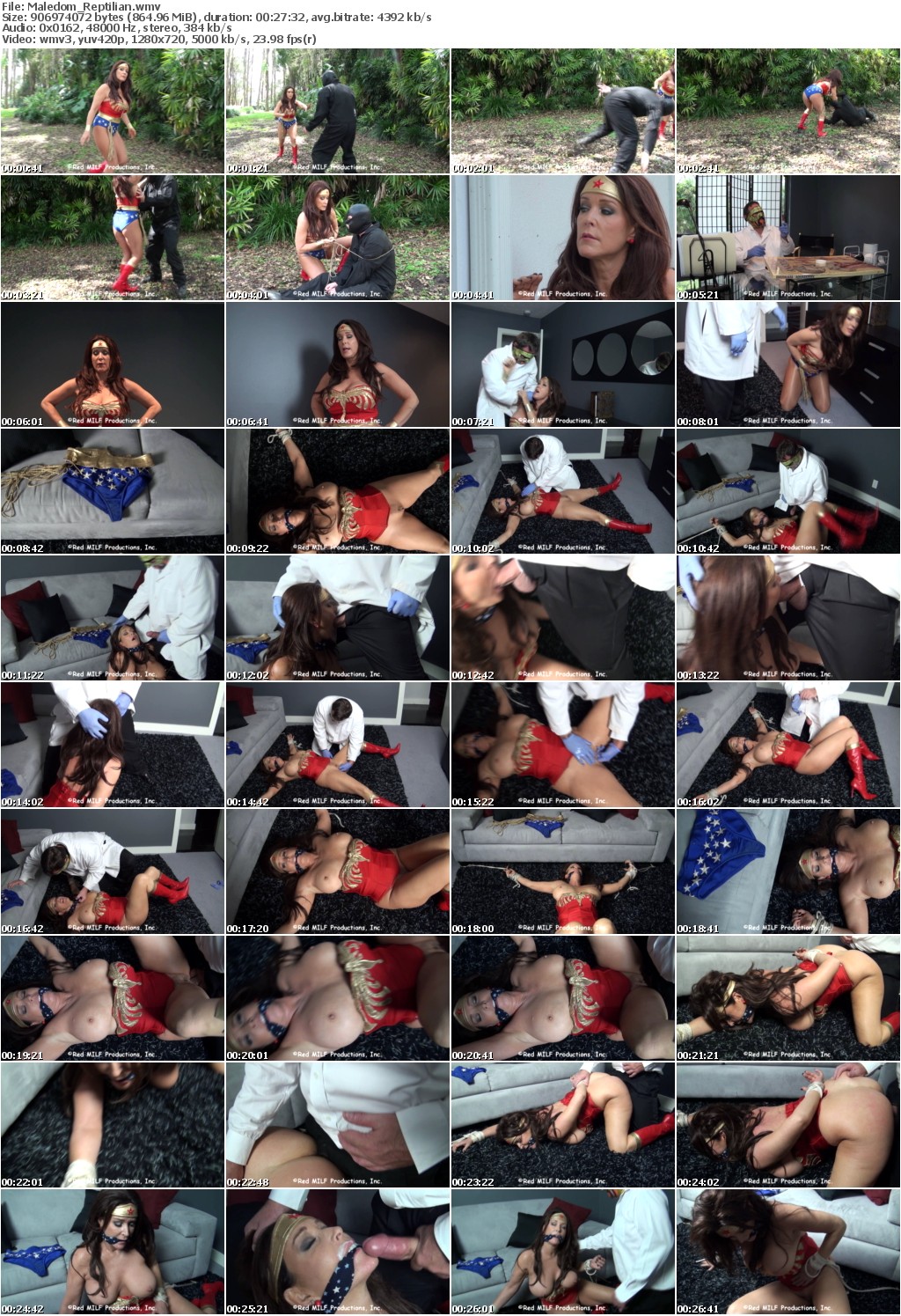 Someone had poisoned the President. At the hospital where he lay fighting for his life, a group of doctors were struggling to find a cure. In desperation, the President’s aides turned to Wunder Woman for help. The Amazing Amazon had a hunch that an evil scientist called the Reptilian was behind the fiendish deed. With no time to waste, she raced to his lair. At the entrance she came face to face with a burly, masked guard. Wunder Woman did not wish to fight him, but he gave her no choice. She hit him hard in the stomach and dropped him with a kick to the chest. She was about to run on when he managed to grab her ankle and hold her back. Getting to his feet, he wrapped his arms around Wunder Woman’s waist and lifted her off her feet. Wunder Woman frantically flailed her legs until she worked herself free from the powerful hold. She then delivered a series of swift elbow-chops to the head that left her adversary lying dazed and defeated on the ground. Thanks to her golden lasso of truth, she was able to bind the guard and make him tell her the access-code to the Reptilian’s office. A short while later she was inside – having picked locks and displayed all sorts of cunning along the way. The lizard-masked Reptilian was sat at his desk preparing for an experiment when Wunder Woman entered and demanded he give her an anti-venom to save the President. At first the Reptilian pretended to have no idea what she was talking about. Then, seeing that Wunder Woman could not be fooled, he told her to look in the drawer of one of his cabinets. As Wunder Woman turned her back on him, the Reptilian sneaked up behind her and injected a mysterious substance into her neck. Wunder Woman cried out, sagged to the ground, and fell into a deep sleep. She awoke later to find herself lying on the floor, gagged, and bound at wrists and ankles. Her star-spangled bottoms, golden belt, and lasso of truth had all been stripped from her body and placed out of reach. The Reptilian was knelt at her side. His cock was out and he was spanking it against her tits – which her red corset had been pulled down to expose. Wunder Woman moaned in distress and tried in vain to pull away. But she had no strength at all. Her plight suddenly worsened as the Reptilian removed her gag, sat her up, and shoved his cock into her mouth. For a long time the Amazing Amazon had to suck him off. Briefly she managed to curse the Reptilian for delaying her efforts to save the President. Then she begged him to hurry up and told him she would do anything he wanted if he would just hand over the anti-venom and let her go. The Reptilian responded by forcing her to resume sucking his cock – this time as deeply and sensually and willingly as she could. An epic face-fucking later, Wunder Woman was re-gagged and tied back down in her original helpless position. She whimpered constantly as the Reptilian pushed his fingers knuckle-deep into her pussy and frigged her clit. The surgical gloves he wore glistened with the Amazing Amazon’s reluctant juices. Having enjoyed himself this way, he roughly tweaked her nipples, then prepared to fuck her. Wunder Woman saw what was coming and fought more desperately than ever to escape her bonds. Once again it was all to no avail. Nothing could stop the Reptilian from parting her legs and shoving his big cock deep into her undefended pussy. She closed her eyes and moaned against her will as her fiendish violator gave her a long and expert fucking. Later the Reptilian made her get on her hands and knees so that he could pound her extra deep. Wunder Woman sobbed as he continually spanked her bare butt-cheeks and told her to work her pussy on his cock. Finally, she had to sit up and present her face for the Reptilian to blast with his cum. The Amazing Amazon winced as the white stuff coated her chin and lips and got on to her teeth. The only thing that kept her together was the belief that she would soon be free to save the President. Alas, the Reptilian never had any intention of letting her go. Instead, he injected her once again with his special substance. Wunder Woman called out in distress as it started to overpower her. There was nothing she could do for the President now. Her immediate future was going to be spent as the sex-slave of the cold-hearted Reptilian.