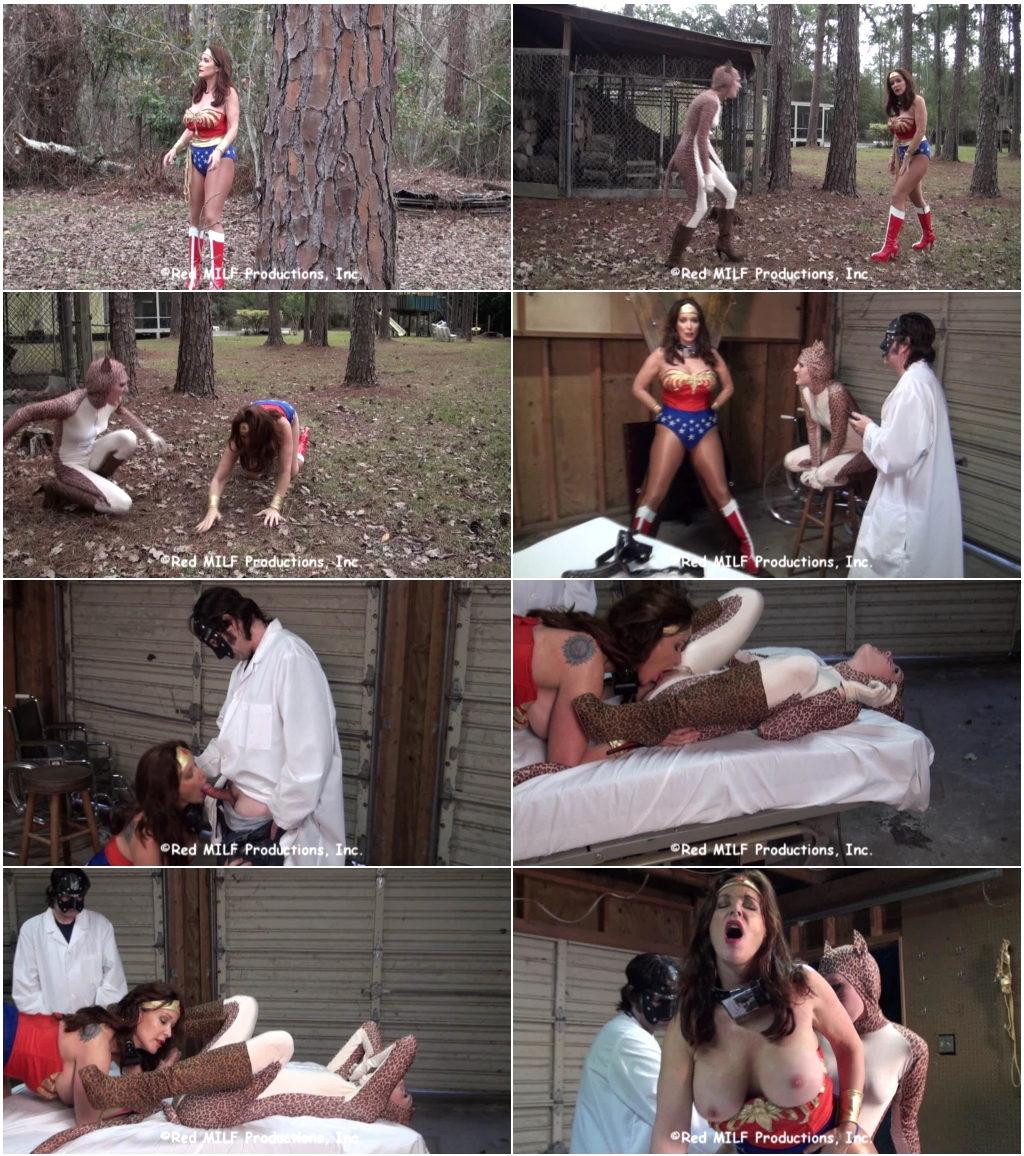 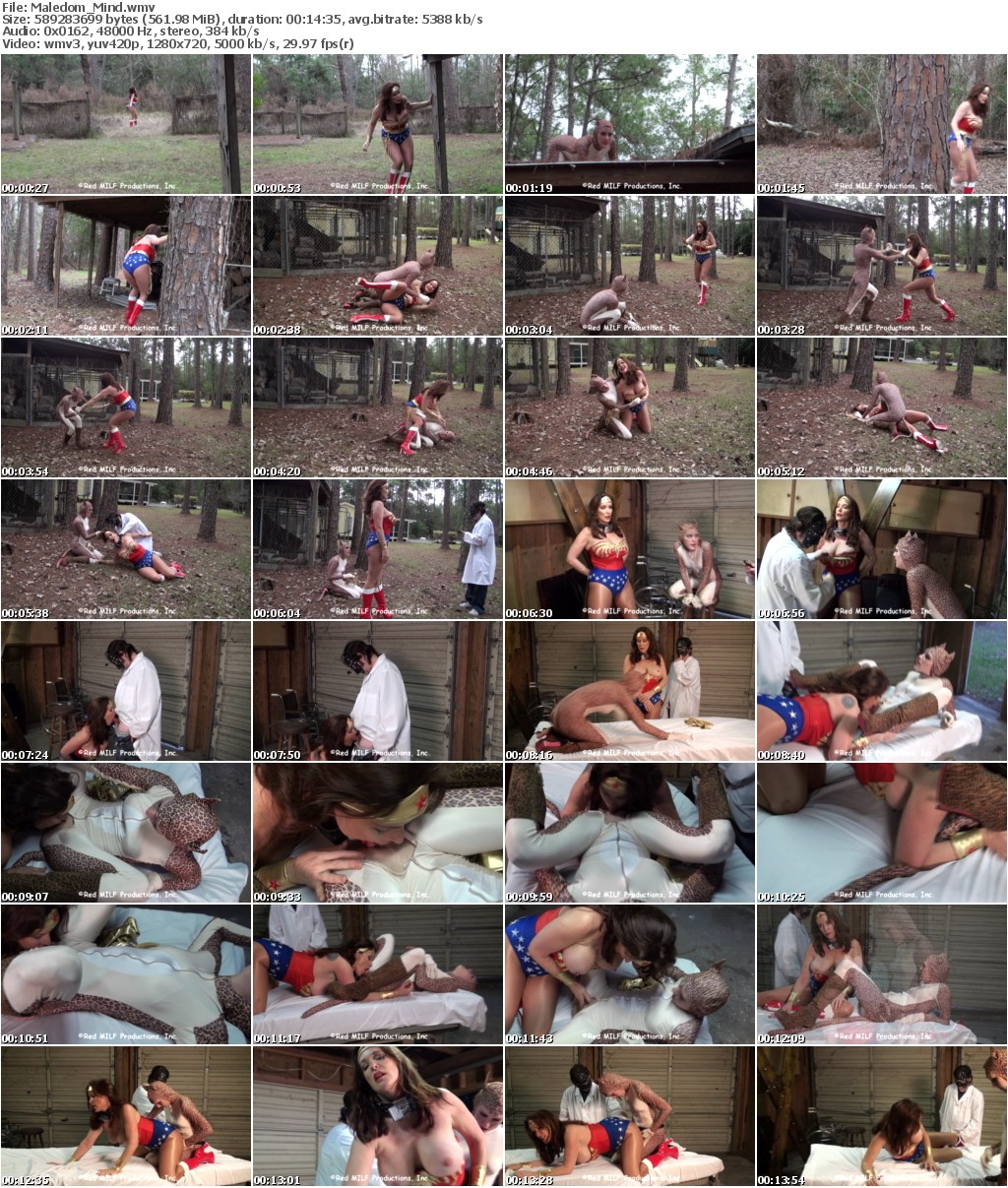 Wunder Woman was sent false information on a damsel in distress. She arrived at the abandoned house looking for her. She heard a cat calling out in the woods. As she came up on some metal cages large enough for humans she looked desperately for any signs of a woman. The cat calls got louder, distracting Wunder Woman. As she stood looking up in the trees, Cheetah jumped off a roof top onto Wunder Woman. They rolled onto the ground. Wunder Woman bounced back up quickly composing herself. She demanded to know where the woman in trouble was. Cheetah was on the ground with her ass high in the air was in heat. She lured Wunder Woman to Professor for some relief. Wunder Woman again demanded that Cheetah tell her where the woman was. She did not want to fight. Cheetah lunged at Wunder Woman, they brawled, testing strength. Wunder Woman overpowered Cheetah sending her to the ground with a blow to her belly. Cheetah gasped for air then retaliated when Wunder Woman thought it was over. She grabbed at Wunder Womans magic belt pulling it off. Wunder Woman fell to the ground weak. She crawled to Cheetah trying to get her belt back. Soon Cheetah had Wunder Woman pinned down as she waited for the professor. He had a collar with a mind transforming sexual device. It was controlled with a remote. The device stimulates the sexual part of the brain and rendered the victim speechless. Wunder Woman was under their control and led to the chamber. There the professor controlled what Wunder Woman was to do. He had her stand on display on a Saint Andrews Cross as he groped her Amazon tits. Cheetah perched up on a stool meowed and made sexual cat calls. Wunder Woman was soon sucking the professors cock. Cheetahs little kitty was throbbing and needed attention. Professor instructed Wunder Woman to pleasure Cheetah with her tongue until Cheetah came hard. Wunder Woman was told to get on all fours and let Cheetah fuck the Amazon with a strap on for the professors amusement. The professor wanted to watch Wunder Woman lose control so he told her she must cum, and she did. She pushed herself up and down on the big hard dick. Once her orgasm she collapsed. The professor and Cheetah were satisfied for one night. He had Wunder Woman get back into position on the Saint Andrews Cross and await her fate for the next day, week, month or more. will Wunder Woman ever snap out of this mind control device?
Category: SUPERHEROINES
Related Categories: BONDAGE SEX, STRAP-ON, BONDAGE, BLOW JOBS, PUSSY EATING
Keywords: wonder woman
Tags:Maledom,Male Domination,superheroine,superheroines,Humiliation,storylline,Submission,froced orgasm,super hero, super heroines,superheroines porn,lezdom,catfight,lesbian domination,strapon,strap-on,pussy licking