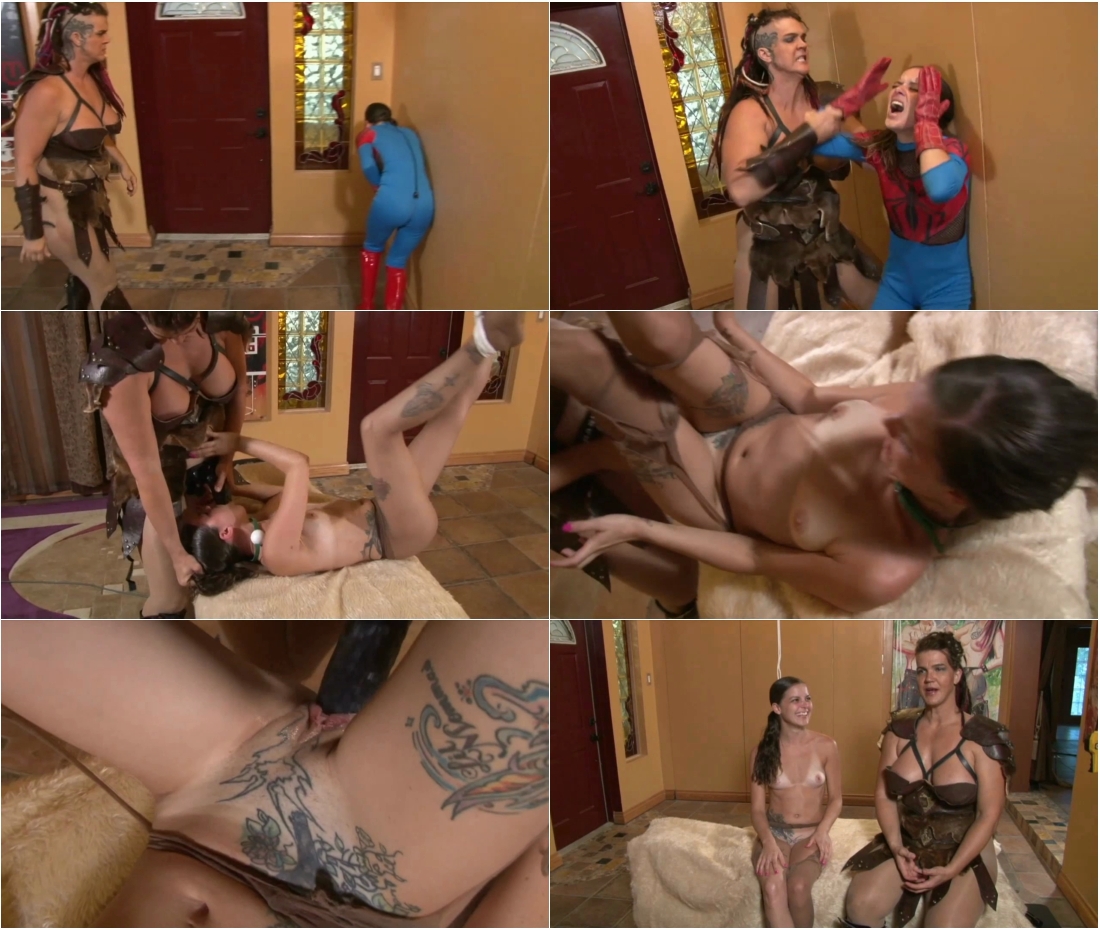 In this third installment of the Vril, Saharra Huxly reprise her role as the evil Vril. Once again, the monster amazon having gained more power since her last encounter with a super heroine is on the prowl. Meanwhile, young Blue Arachnid, played by Michelle Peters, has been sent to find Patriot Girl. Last heard from in this area, Blue Arachnid uses her heightened tracking skills to try and locate the missing heroine. She tracks Patriot Girl to an old abandoned house. Letting herself in quietly Blue Arachnid begins to search. The little heroine has no idea what she is about to find!As Blue Arachnid searched the house she was stunned when the monster Vril stepped out from the darkness and confronted her. Stunned a bit, Blue Arachnid starred at the giant Amazon villain. The mighty little heroine did not cower or back down instead she did what hero does. She attacked! Blue Arachnid threw punch after powerful punch at Vril. But the monster simply brushed them off as easy as one slaps a gnat away. Then the pain began, poor Blue Arachnid. Vril did just that she brought the pain! The fight was furious as Vril tore into the poor little heroine. Nothing worked for the young heroine. She was battered, her costume literal ripped off her (on screen) she was left almost nude, just in pantyhose at the mighty monsters feet.Blue Arachnid awakens from her unscheduled nap to find her self in a bit of a bondage predicament. Vril grabs her by the hair and shoves her powerful cock in the little heroines mouth. This is followed by some intense fucking as Vril drags orgasm after orgasms from her captive. Each one of Blue Arachnids orgasms makes the villain even stronger. Finally, Blue Arachnid is spent sexually and she in exhaustion. Post clip interviews with Michelle and Saharra close out this action packed clip.
Category: SUPERHEROINES
Related Categories: SUPER VILLAIN, AMAZONS, LESBIAN DOMINATION, COSPLAY, CAT FIGHT / CATBALL Keywords: saharra huxly, michelle peters
tags:superheroine,superheroines,lesbian domination,lezdom,story line ,storyline,froced orgasm,catfight,cat fight,,female fighting,ring wrestling,female wrestling,Scissors ,submission,humiliation,super hero, super heroines ,superheroines porn,superheroines adult movies,strapon,lesbian strapon