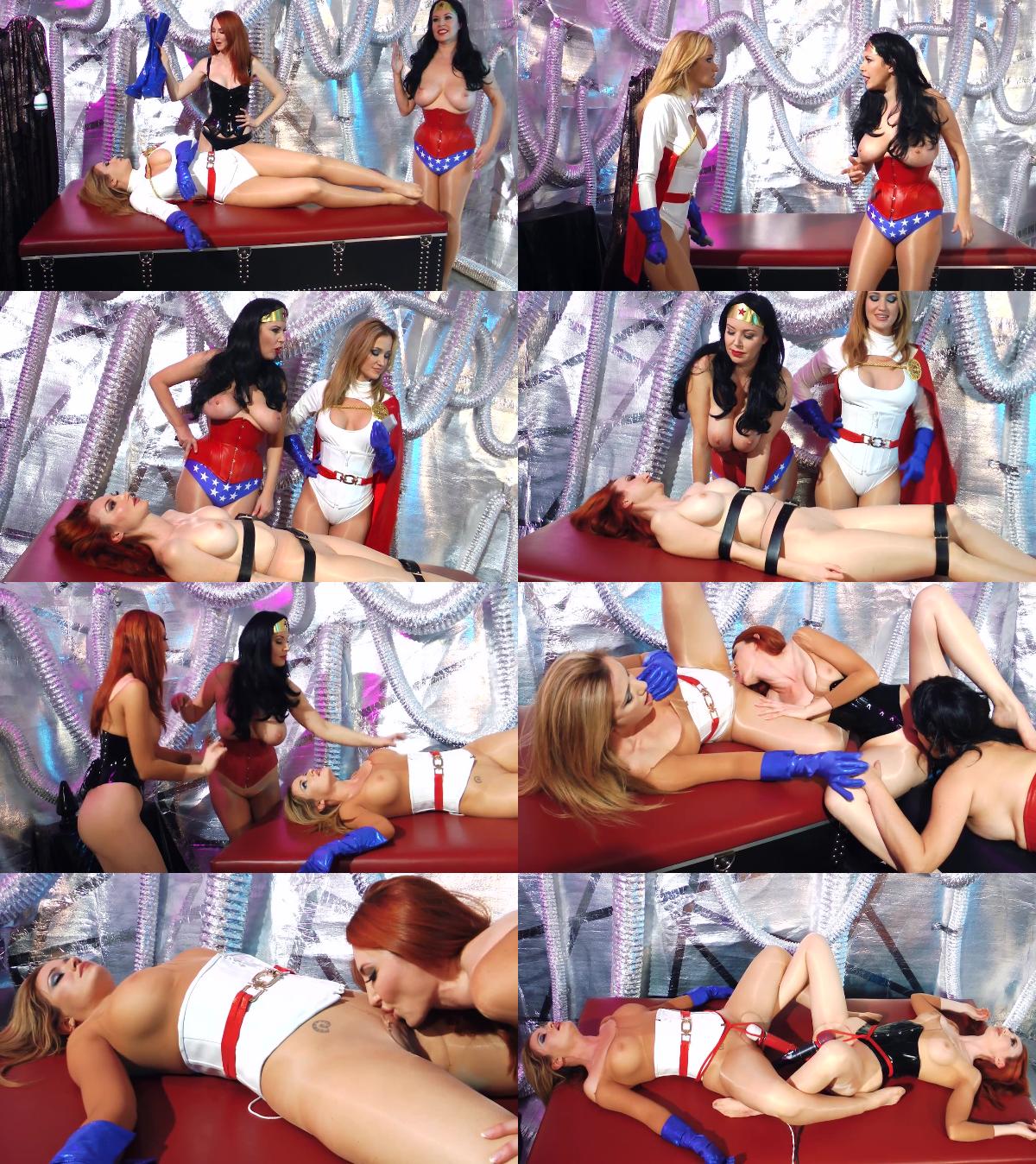 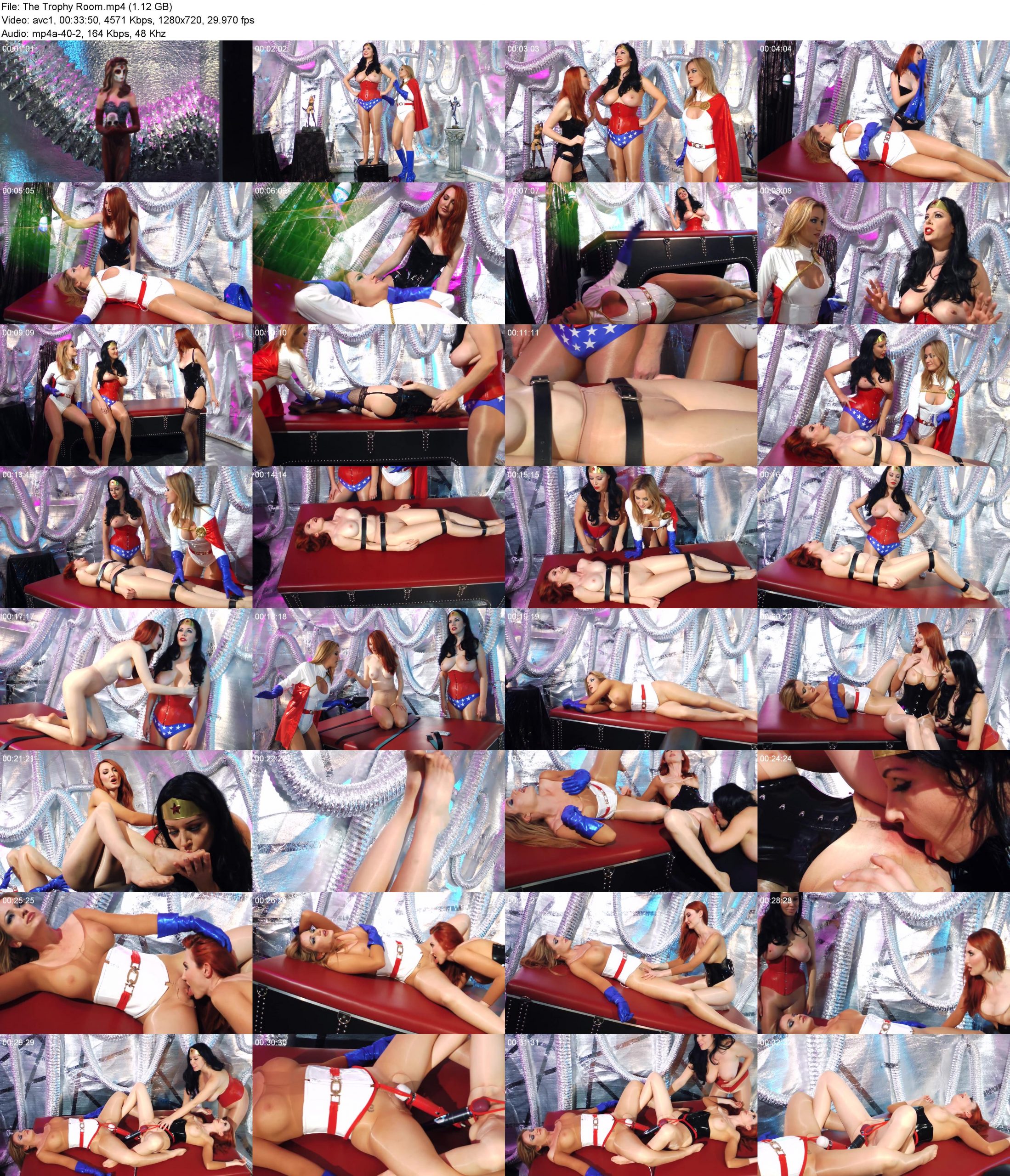 Anastasia Pierce is joined by Angela Sommers and Kendra James in the new video The Trophy Room. Check out the details below.
Starring: Anastasia Pierce as Wonder Woman, Angela Sommers as Power Girl and Kendra James as the Collector
Synopsis: In a previous adventure Wonder Woman was abducted and transformed into a statue by a rich women, an art collector.
Everyone has given up on ever finding Wonder Woman except her good friend Power Girl.
Since her disappearance Power Girl promised herself that she would continue looking for her until she finds her.
And that day has finally arrived!
After following leads, Power Girl finds a sealed chamber, a trophy room at the top level of a warehouse owned by the Art Collector. In there, stands a frozen Wonder Woman under a sheet.
The Rich Woman joins them in the chamber. She is not intimidated by Power Girl. On the contrary, she reveals that she wants to make her part of her collection too!
The Art Collector explains that Wonder Woman is in a frozen state and that her mind is completely blank. She uses a remote device to control her and freeze and unfreeze her.
Power Girl is confused but before she can do anything she gets captured!!!
The adventure will take several turns.. with the power shifting in different directions..
Come find out what will happen to your favorite Super-Heroine.
It’s a RARE opportunity to see all 3 Girl together!!
Includes: Anastasia Pierce as Wonder Woman, Kendra James as the Collector, Angela Sommers as Power Girl , Debooting, Trophy, Statue, Freeze, Frozen, Mind Fuck, Doll Fetish ,Bondage, Pantyhose Fetish, Authentic super heroine legendary costumes, SHIP, Mental Paralysis, Mind Control, Super Villain, Fantasy, Role Play, worship, licking, Girl-Girl-Girl, Kryptonite, Nylon, Mind Control, Sex Slave, Forced Orgasm, Humiliation, Cosplay, Pussy Licking, Parody, Weak, Helpless, Super-heroine in distress with bondage, lots of sexual contacts and humiliation.
tags:superheroine porn,superheroines fetish, superheroines adult movies,superheroine,superheroines,lesbian domination,lezdom,story line ,storyline,forced orgasm,submission,humiliation,super hero, super heroines ,superheroines porn,magic power,magic control,fantasy,lesbian sex,lesbian porn,lesbian bondage,,lesbian strapon,spanking,lesbian bondage,lesbian gangbang,slave,slavery,mistress,enslavment ,catfight,cat fight,,female fighting,ring wrestling,female wrestling,Scissors,catfighting,cat fighting,lesbian torture,catfight fetish,catfight porn ,facesitting,mind fuck,mind control,,mental domination,wonder woman,enslavement,batgirl,bat woman ,catwoman ,black widow,supergirl,Harley Quinn,hypnosis,Mesmerize ,Cosplay,Parody,kendra james,couple domination