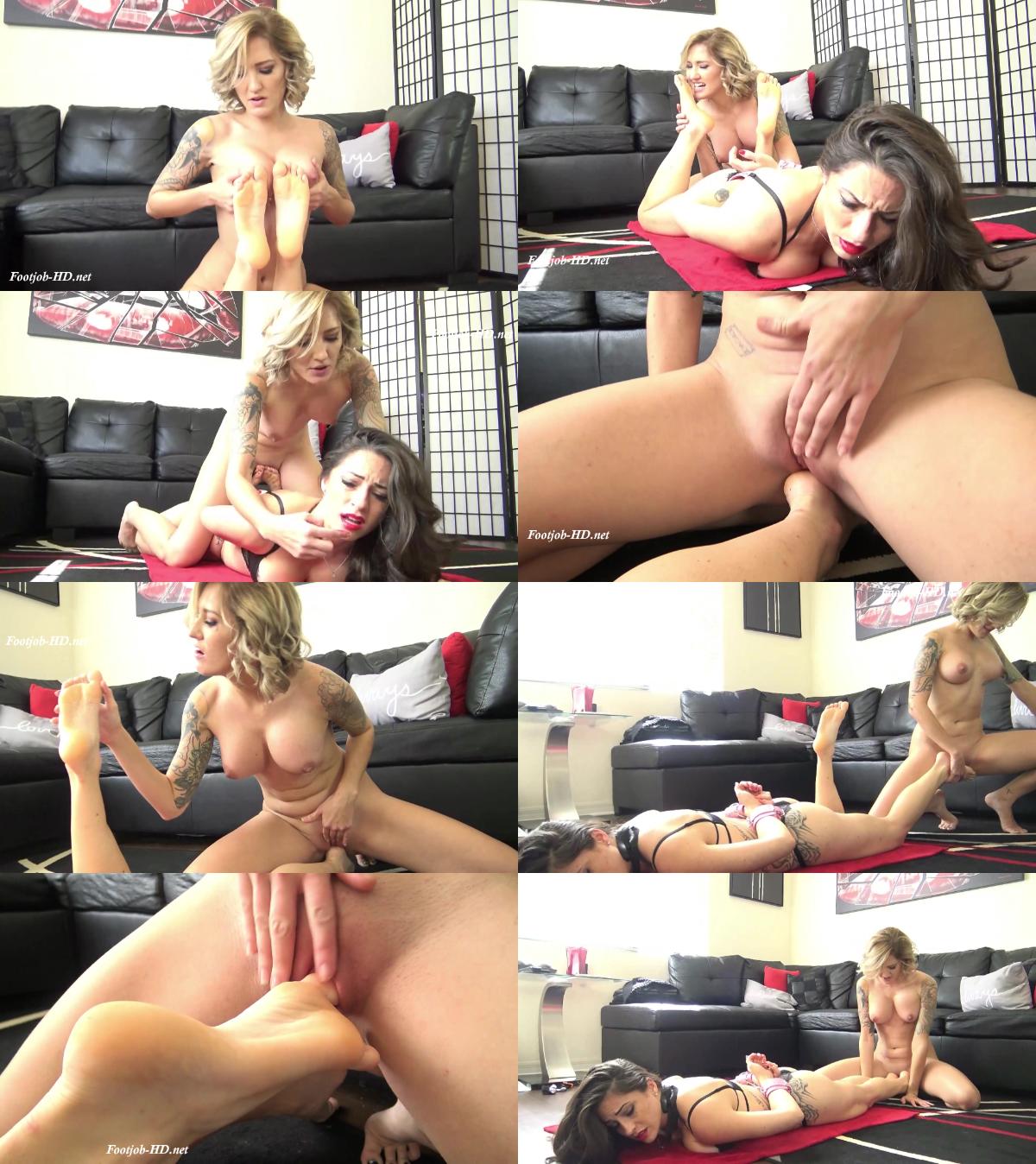 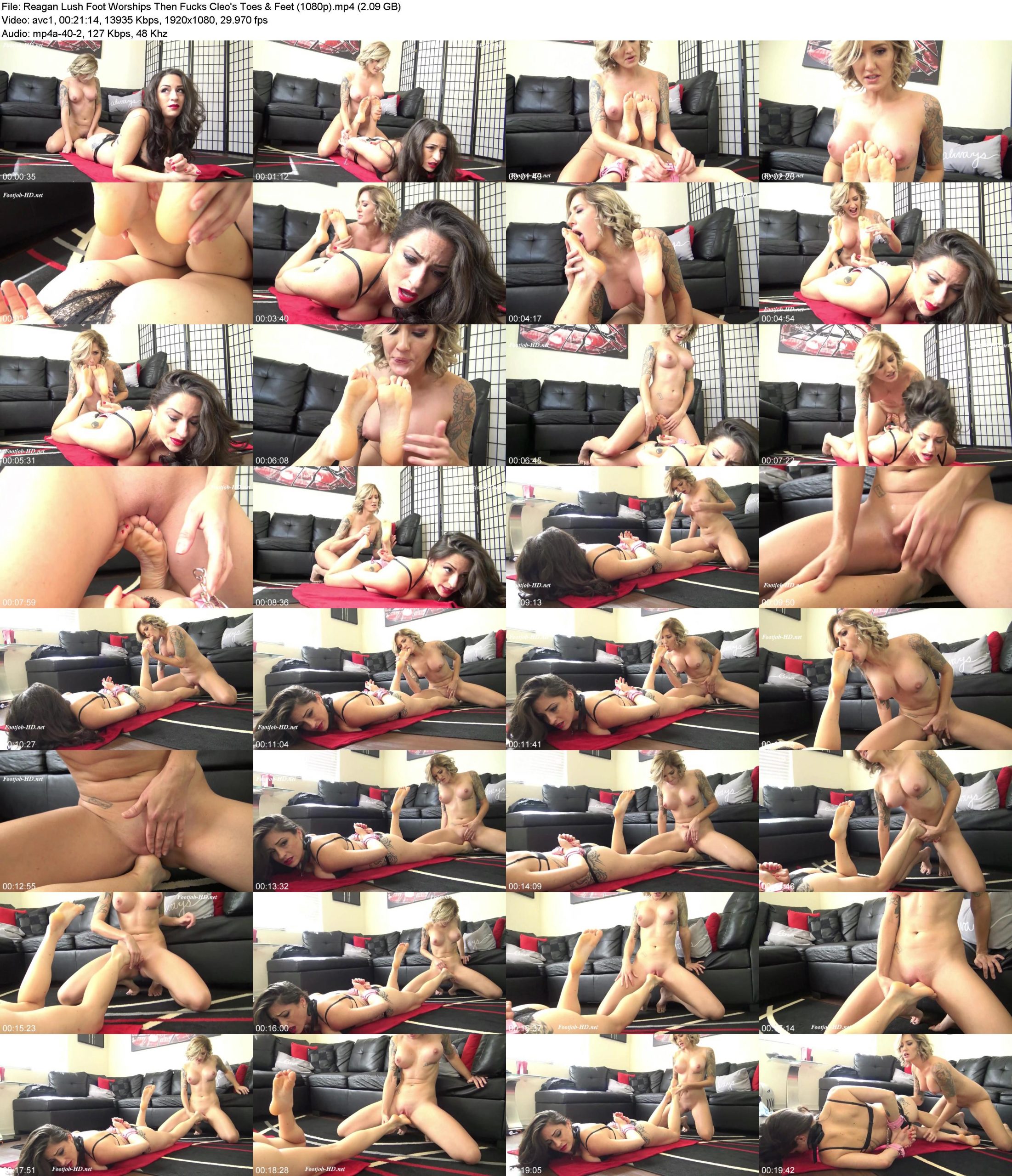 Cleo is on her stomach, on the floor, laying and facing the camera while Reagan completely NAKED kneels at Cleo’s FEET. Reagan sits on Cleo’s SOLES and rubs Cleo’s legs telling her how much fun this is going to be – Cleo doesn’t think so and pouts about the situation. Reagan pulls Cleo’s FEET from between her legs and pushes Cleo’s heels against her butt. Reagan pins CLEO’S FEET between her boobs and starts to take her time tying Cleo’s hands behind her back.
Cleo pouts saying there’s no need to tie her up but Reagan just smiles and hums as she ties her hands. Cleo’s FEET "accidentally" play with Reagan’S boobs while Reagan is tying her but mostly Reagan just rubs helpless Cleo’s FEET all over her TITS: feet under boobs, feet cupping boobs, toes pushing up boobs, feet caught between boobs. After tying up Cleo, Reagan slaps her on the butt saying let’s have some fun, shall we, causing poor Cleo to wince. Reagan starts to SUCK and LICK on Cleo’s SOLES and TOES, one foot at a time then both FEET at once. Reagan bites Cleo’s TOES and FEET, ARCH and HEEL, one foot at a time. Cleo tries to contain her enjoyment when her soles are LICKED, but shows disgust when Reagan SPITS on her FEET and is in shock and pain when Reagan bites her FEET. Reagan sits on Cleo’s FEET, pinning them between her vagina and Cleo’s butt as she reaches around and rubs her finger over Cleo’s lips. Reagan her finger into Cleo’s mouth telling her to suck it like the Reagan sucked her TOES. Cleo talks through the sucking asking Reagan if she likes that and Reagan is enjoying it until Cleo bites her finger and sarcastically asks if Reagan liked that. Reagan pulls Cleo back by her hair asking if she thinks she’s funny and telling Cleo, she’s really going to like the next action. Reagan wets her fingers and sticks them between the TOES of Cleo’s FOOT sliding it into her vagina. Cleo makes a face as Reagan fingers herself, getting her vagina ready for Cleo’s TOES. Reagan stuffs Cleo’s BIG TOE into her vagina and rubs herself as she gets off on Cleo’s TOE. Reagan SPITS on Cleo’s FOOT, enjoying the site of saliva running down Cleo’s SOLE. Reagan places her hands on either side of Cleo’s hips and pounds Cleo’s TOE with her vagina, FUCKING Cleo’s FOOT. Cleo looks disgusted as Reagan rides her TOE to climax. Reagan MOANS and grunts as she unloads her CUM on Cleo’s TOE. Cleo asks if she can go clean up now but Reagan isn’t done. Keeping Cleo’s FEET where they are (one between legs with toe in vagina and the other one pressed between butt) Reagan turns Cleo over to her side lies on her side to relax. Reagan spits on Cleo’s SOLE and LICKS the CUM off Cleo’s FEET as Cleo can only pout calling Model a sick perv.
tags:lezdom fetish,lesbian domination porn,catfight ,submission,humiliation,overpowered,facesitting