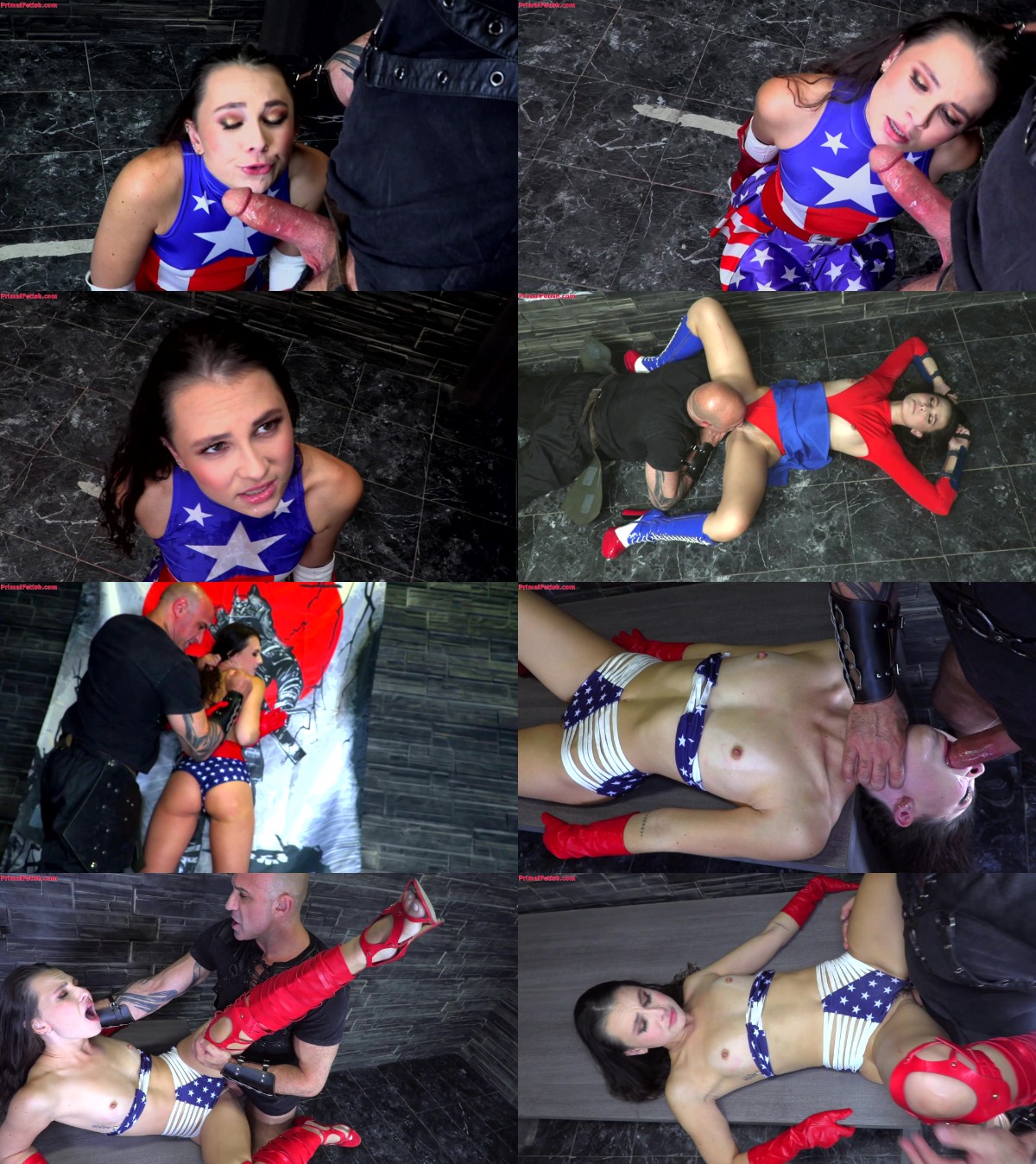 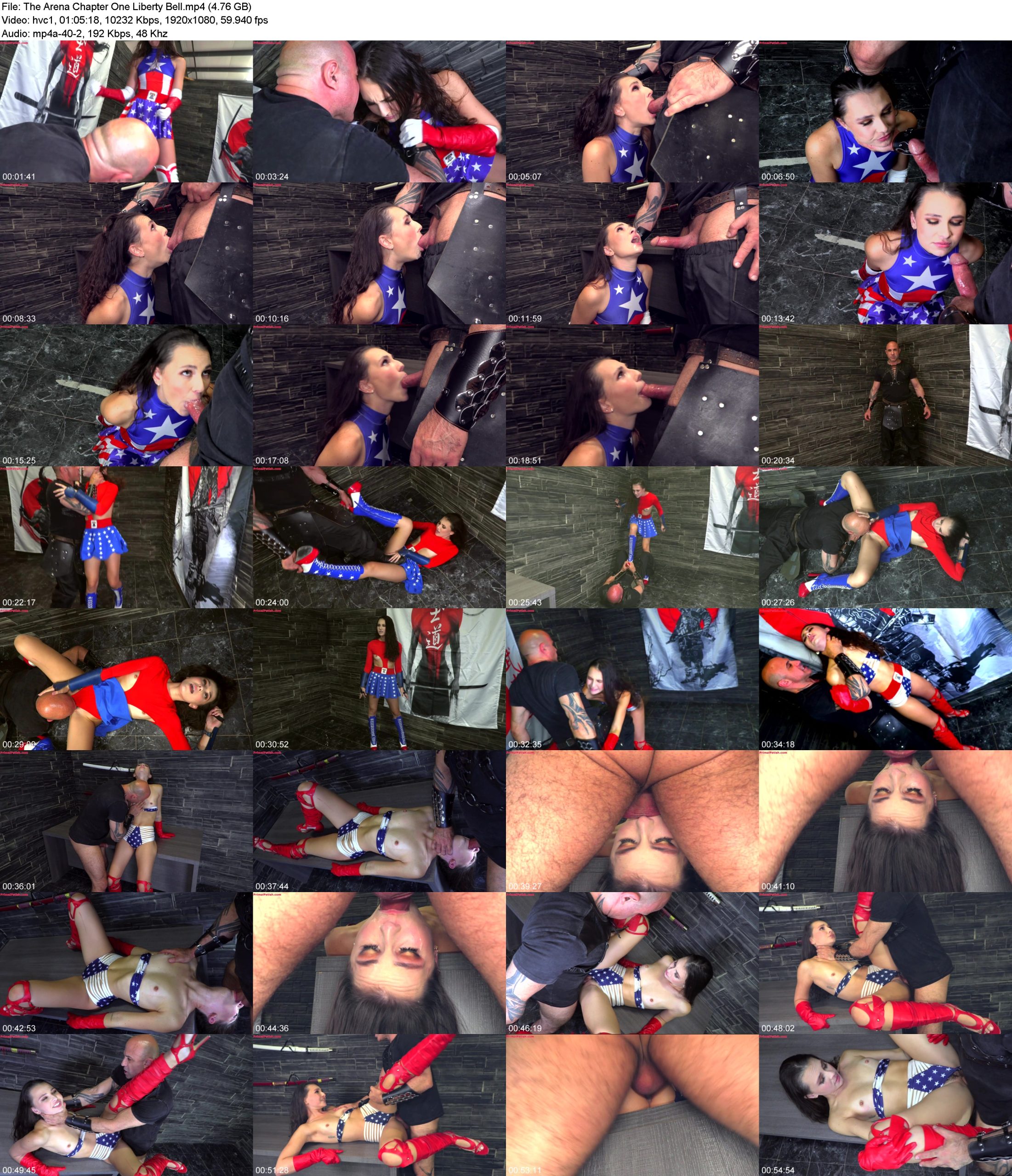 The first in a planned quarterly series of Superheroines enter int0 the arena to face Supervillains they have not been able to capture. The prizes they can claim are the villians surrender and confession, information about other villains and recovery of stolen wealth and technology. In exchange they consent to the villains claiming prizes such as their secret identity, costume, powers and even the willing surrender of their bodies for the villains pleasure The new Liberty Bell has chosen to fight in the Arena. A neutral ground where supervillains often meet to settle matters one on one. It is also a place where Superheroines can challenge villains they haven’t been able to catch. The only rule to enter is that you must offer up a prize that your opponent wants. In this case Liberty Bell wants stolen superweapons and the thug that stole them Dark Knight. Liberty Bell considers Dark Night second rate compare to her and she is confident she can beat him. So confident that she gives full consent to let dark Night use her body however he wants if she loses. Once in the Arena ANYTHING goes. Round One- Liberty Bell goes in and quickly becomes overconfident that her superior speed and sonic shockwave will give her an easy win. However she underestimates Dark Knights greater strength and fighting experience. The fight goes back and forth but LB is defeated.
Dark Night eagerly claims his prize using the young superheroines mouth and making work hard to get him to cum
Libery Bell is back for vengeance and the fight is fierce. Multiple times LB comes back from the brink of defeat unwilling to submit. During the battle DK mocks her that the real reason she came back is to be fucked and LB accidently reveals that she is “saving herself” Is she a virgin? DK holds LB down buying his face in her exposed pussy figuring the arousal will defeat her more surely than a beating and it almost works but LB won’t let DK get into her head and Victory is hers but she is frced to choose between bringing DK to justice or recovering the dangerous wepons that he stole. She does the right thing and recovers the stolen technology.
Liberty Bell is ready to end it with one final battle to bring DK to justice. Unfortunately after her previous victory she is more overconfident than ever and underestimates how much more powerful DK has become
LB now willingly surrenders her body to DK. It’s worse than she imagined as she gives into the pleasure and cums multiple times becoming completely submissive to his powerful thrusting. She has no experience with something like this and her body completely betrays her. Being chked and slapped and called a slut is driving her wild and she forgets herself. After Dk fills her with his evil cum he tells her he is looking forward to the next time when he takes her ass. Liberty Bell is ready to agree that he can have anything and then suddenly remember herself. How could she give in so completely?
Related Categories: COSPLAY, 18 & 19 YRS OLD, WOMAN FOLLOWING ORDERS, CREAMPIE,MENTAL DOMINATION.
Keywords: liz jordan, michael masters, leotard, mixed fighting, facial, bearhug, throat lift.
tags:superheroine porn,superheroines fetish,superheroines adult sex movies,fantasy,mind control,forced sex,wonder woman