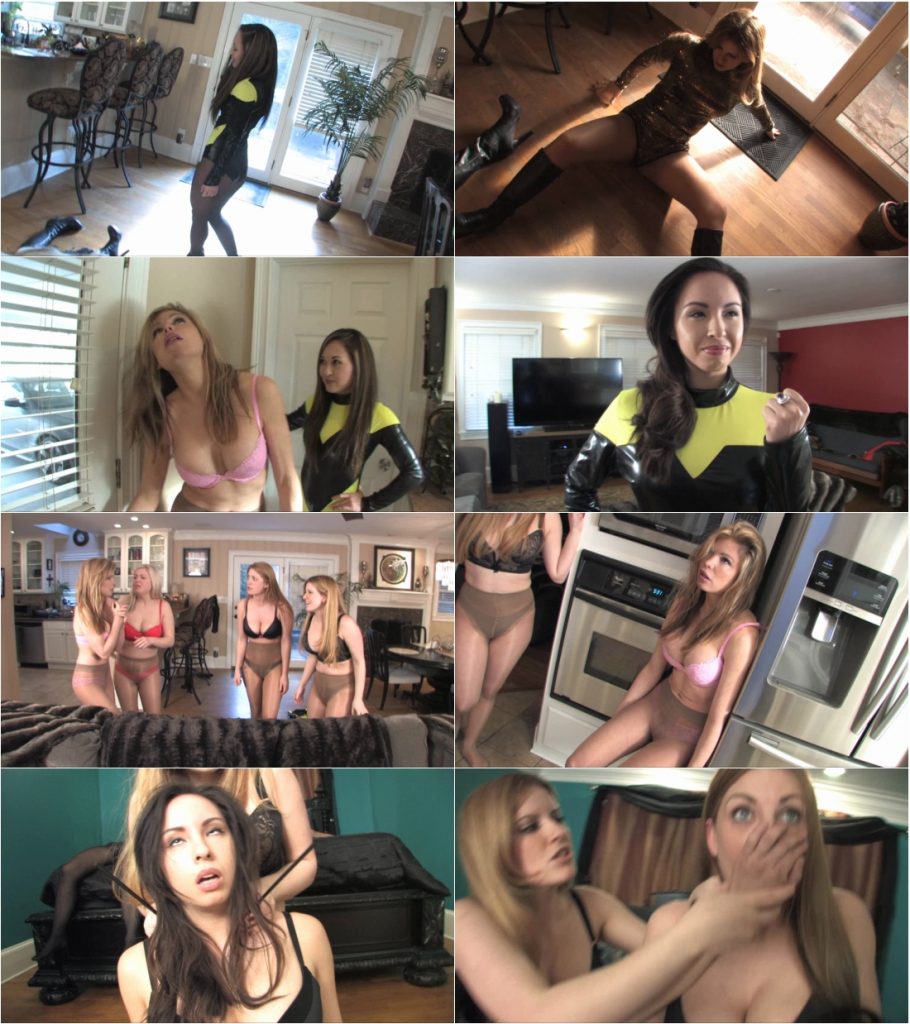 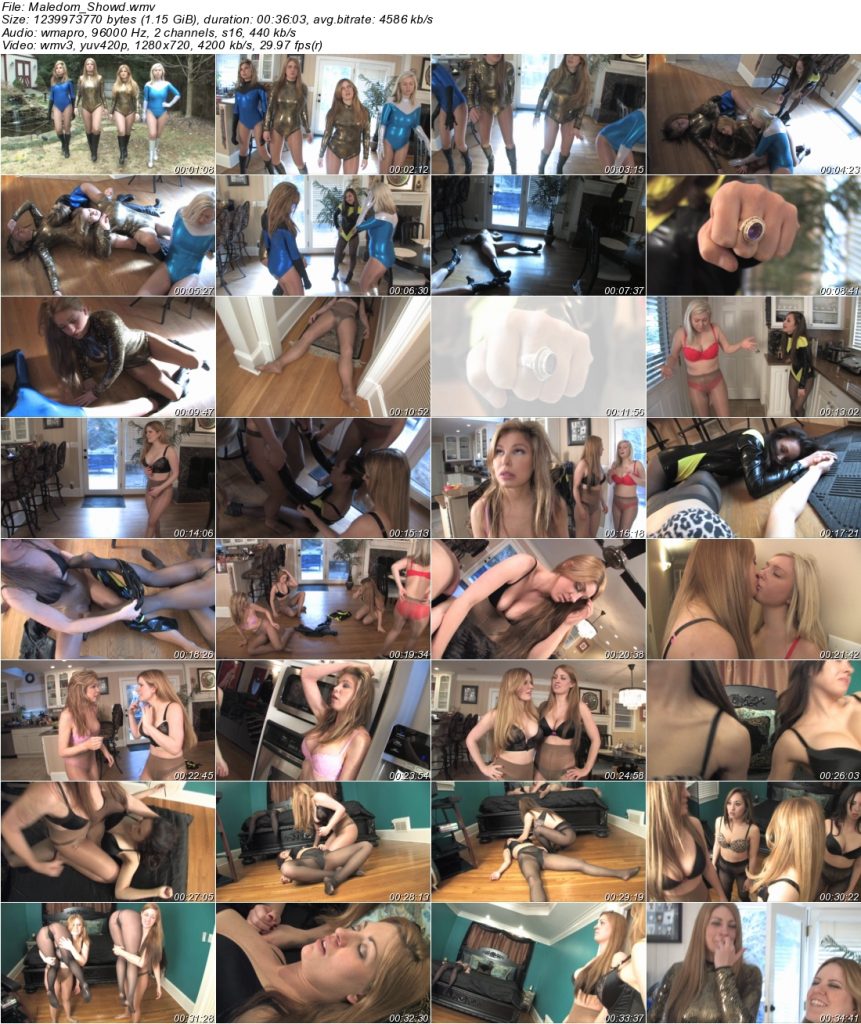 Starring Jacquelyn , Keri Spectrum, Candle Boxxx, Heather West, Sumiko and Lucy Purr!
We fade in on secret agents Keri Spectrum, Jacquelyn Velvets, Candle Boxxx, and Heather West planning an attack on a secret lair containing the EVIL ninja Sumiko! The spies are informed that whoever manages to capture the villainess will become the new team leader.and after a quick pep chat they move in, easily making their way inside Sumiko’s last known location. The ladies line up, but before they can form a plan, Sumiko attacks with a burst of speed, knocking all four ladies out with punches to the jaw! The ladies come to but Sumiko attacks yet AGAIN! The spies are unconscious yet again, only this time Sumiko stops to rag doll them a bit while taunting their sleeping bodies.

Sumiko leaves and the ladies come to, making their way to their feet. Sumiko appears behind them but they catch her before she can attack! They tell her it’s over for her, but a confident Sumiko delivers a little speech about how she made some “arrangements” for the agents. We see each girl suddenly get knocked out by several methods.as Sumiko stands there talking! The girls drop to the ground and Sumiko rag dolls them a bit more, smiling as she leaves the room. One by one the girls come to.and each decides to go off on her own to find the target. Each time they corner Sumiko.but we see a hand wielding a magic ring enter into frame, zapping the ladies leotards off! The confused spies are then knocked out by the devious Sumiko, and it’s slowly becoming obvious that the lethal Japanese assassin has some help hanging around her home!

The ladies come to and regroup, each one wearing only their lingerie and pantyhose. Sumiko goes for another attack but agent Heather reverses a sleeper with a KO headbutt! The ladies grin as they return Sumiko’s favor, stripping her down to her lingerie and hose.until a mysterious and beautiful Asian ninja appears behind them (played by Lucy Purr).wielding the magic ring! Lucy battles the 4 confused agents and knocks them all out, but as she goes to awaken Sumiko, Keri manages to trip her.causing her to collapse on top of her partner and strike her head on the wooden floor. Exhausted, Keri manages to strip Lucy down before fainting. Now all SIX ladies are out.until Sumiko and Lucy wake up and lock hands. The magic ring causes them to disappear, leaving a group of sleeping agents on the ground. They eventually come to and break into an argument over whose incompetence lead to their defeat. A double sleeping gas attack renders them unconscious and leaves them folded over the couch, derrieres exposed. A frustrated Keri wakes up and recruits Heather, convincing her that they should be the ones to finally take Sumiko out. Jacquelyn awakens and does the same with Candle.
leading to a twist double-cross that takes place when both Keri and Jacquelyn use sleepy lip gloss to gently render Heather and Candle unconscious with sensual “good night” kisses!

Turns out Keri and Jacquelyn have been in cahoots the whole time, becoming part time lovers while planning on splitting the bounty on Sumiko’s head! The two meet up and find Sumiko and Lucy in their bedroom, both waiting for the blonde agents. The girls square off and a brutal fistfight ensues.one that leads to multiple KOs and what appears to be a final victory from Keri and Jacquelyn. The two ecstatic agents celebrate with a kiss.forgetting that their lips are still coated with the sleepy gloss! The ladies slump to the ground, leaving Sumiko and Lucy to awaken and prepare for their coupe de grace! Keri and Jacquelyn come to and square off against the ninjas, who have handfuls of hypnotic powder hidden in their hands. Before they can throw it at Jacquelyn and Keri, however, the agents blow the powder into the ninjas’ faces! Keri and Jacquelyn command the two hypnotized girls to render each other unconscious with nerve pinches and they do so, leading to a double over the shoulder carry as Keri and Jacquelyn celebrate. They set the ninjas on the bed, but Jacquelyn suddenly uses Sumiko’s limp hand to cover Keri’s mouth, giving her a dose of the hypnotic dust residue! Keri passes out and quickly becomes Jacquelyn’s personal (and hypnotized) slave. The lovely and treacherous Miss Velvets commands Keri to over the shoulder carry both ninjas out of the room one by one, which she does as we fade out on a smiling Miss Velvets!!!
This movie contains multiple punch out KOs, neck pinch KOs, neck chop KOs, head butt KOs, heart punch KO, sleepy spray KOs, sleepy lipstick kiss KO, chopstick pressure point KOs, hypnosis, belly punching, body piles, quick KOs, clothing stealing, choreographed fighting, OTS carries, limp limb manipulation
tags:superheroine,superheroines,lesbian domination,lezdom,story line ,storyline,forced orgasm,submission,humiliation,super hero, super heroines ,superheroines porn,superheroine porn , superheroines adult movies,catfight,cat fight,,female fighting,ring wrestling,female wrestling,Scissors,catfighting,cat fighting