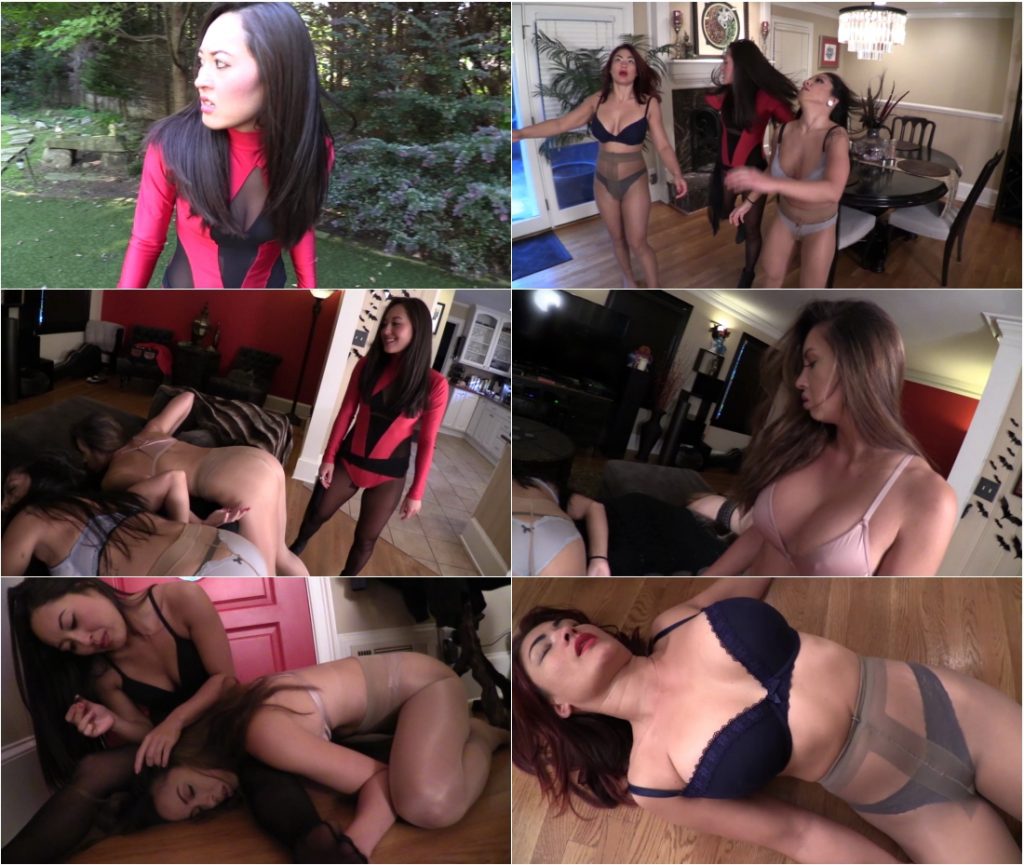 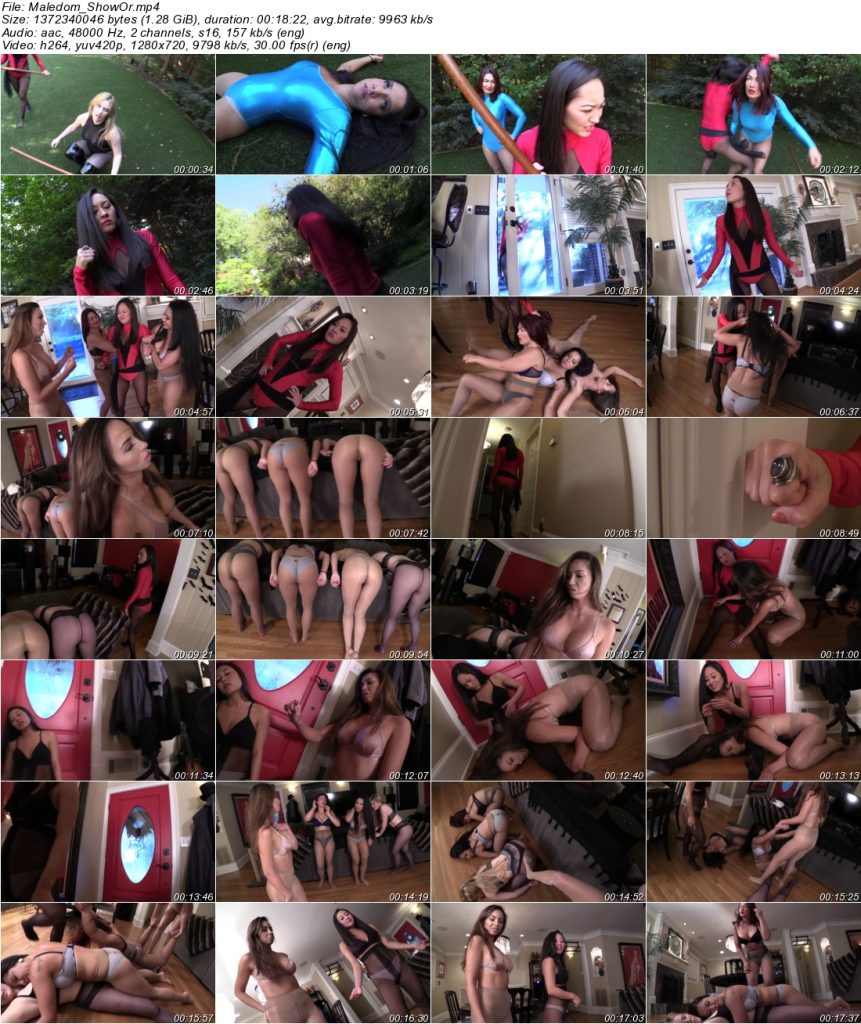 Starring Jacquelyn Velvets, Sumiko, Jinx, Lucy Purr, and introducing Minxy Li
“In the beginning.” We flash back to a pivotal and historic fight as Velvets clashes her bo staff with Sumiko’s. The Japanese fighter strikes first, knocking Velvets to the ground, but the blonde super smiles. Turns out she has three minions (played by Minxy Li, Jinx, and Lucy Purr) waiting in the shadows.and they attack, taking Sumiko by surprise long enough for Velvets to make her escape. Sumiko knocks each underling out with speed and efficiency and then proceeds to remove their super-powered suits with a mysterious ring that rests on her right index finger. She moves into the lair, boasting that she’s vanquished her soldiers, but Velvets reveals that their power will only disappear if their leader is destroyed! Before she can react, Sumiko is attacked by all three super-lackeys but she overpowers them with ease. Soon enough, the sexy baddies are stacked side by side on a nearby couch, derrieres exposed. Sumiko leaves and Velvets steps into the scene, ridiculing her minions as we see Sumiko’s ring enter the frame. She zaps Velvets’ suit off and knocks her unconscious, and it appears she’s won the day.until her attempt to leave the room is met with a booby-trapped door-handle that electrocutes and knocks her out cold!
We watch as Lucy Purr comes to before anyone else and inspects Sumiko’s lifeless form. She removes the power ring and tries it on, zapping Sumiko’s suit off. She then inspects it, and the ring seems to take a life of its own. It emits a sudden and powerful flash that knocks Lucy out cold. Sumiko comes to and smiles as she realizes her ring has, after quite some time, chosen a partner for her. She snaps her fingers and Lucy is suddenly re-programmed to be her sidekick. The two are thick as thieves as they approach Velvets, Jinx, and Minxy. The trio comes to but Sumiko and Lucy are ready. A confused Velvets and her hench-women are knocked out cold by a double kick to the jaw. Sumiko and her newfound partner delight in stacking the unconscious ladies up, making sure they stay out with a brutal chop to the neck that sends them ALL into an even deeper sleep. Sumiko locks lips with her new partner right before they leave. Moments later, Minxy comes to and carries her friend Jinx out of the scene, noting that the pay for this job just isn’t worth it. The camera pans over a sleeping Velvets.who, as we all know, is destined to tangle with Sumiko and Lucy again in the not-so-distant future.
This movie contains choreographed fighting, bo staff KO, head butt KOs, belly punching, double neck chop KO, punch out KOs, neck chop KOs, electrocution KO, stun KO, 3 girl face kick KO, 3 girl neck chop KO, body piles, butt slaps, OTS carry
tags:superheroine,superheroines,lesbian domination,lezdom,story line ,storyline,forced orgasm,submission,humiliation,super hero, super heroines ,superheroines porn,superheroine porn , superheroines adult movies,catfight,cat fight,,female fighting,ring wrestling,female wrestling,Scissors,catfighting,cat fighting