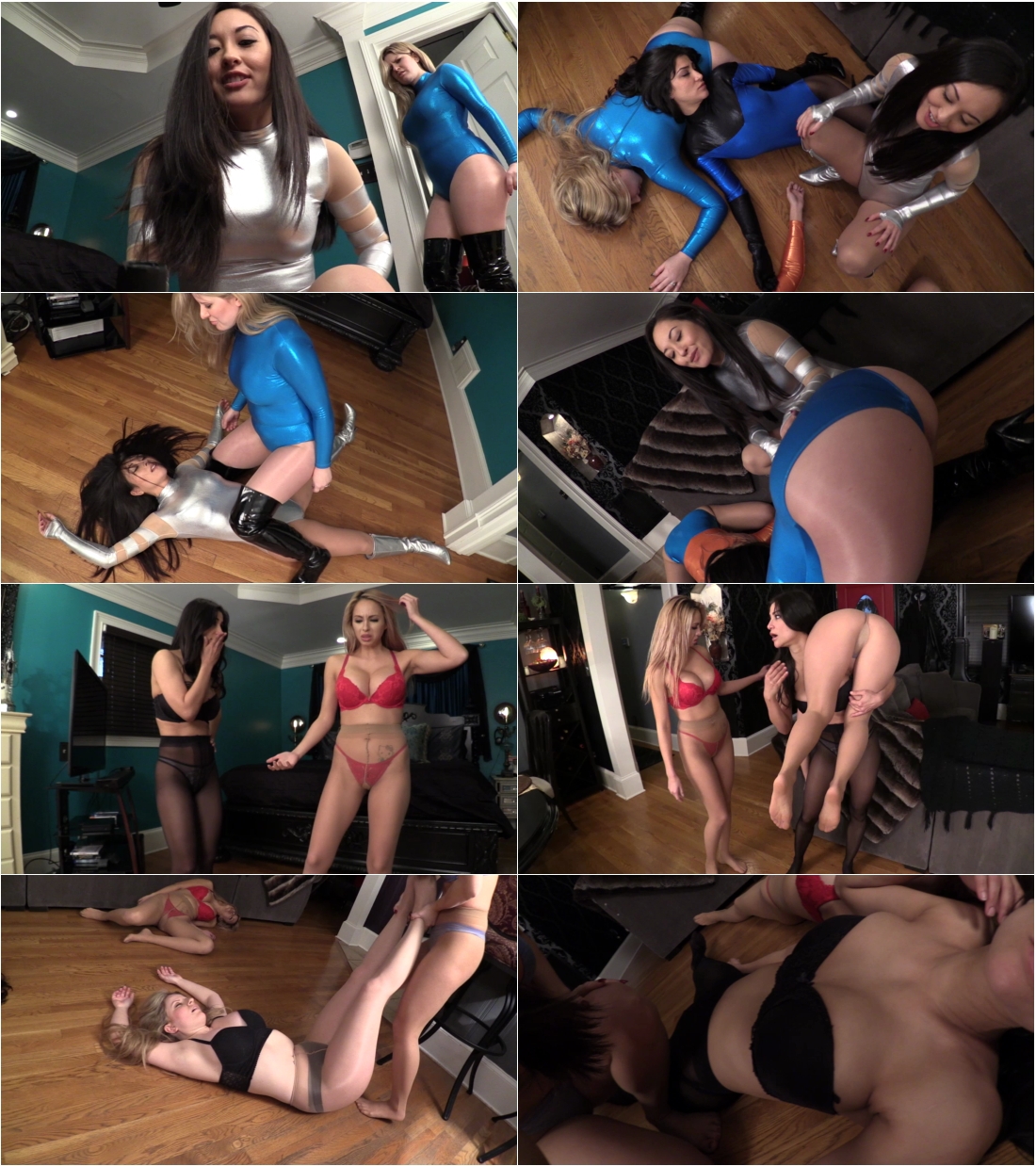 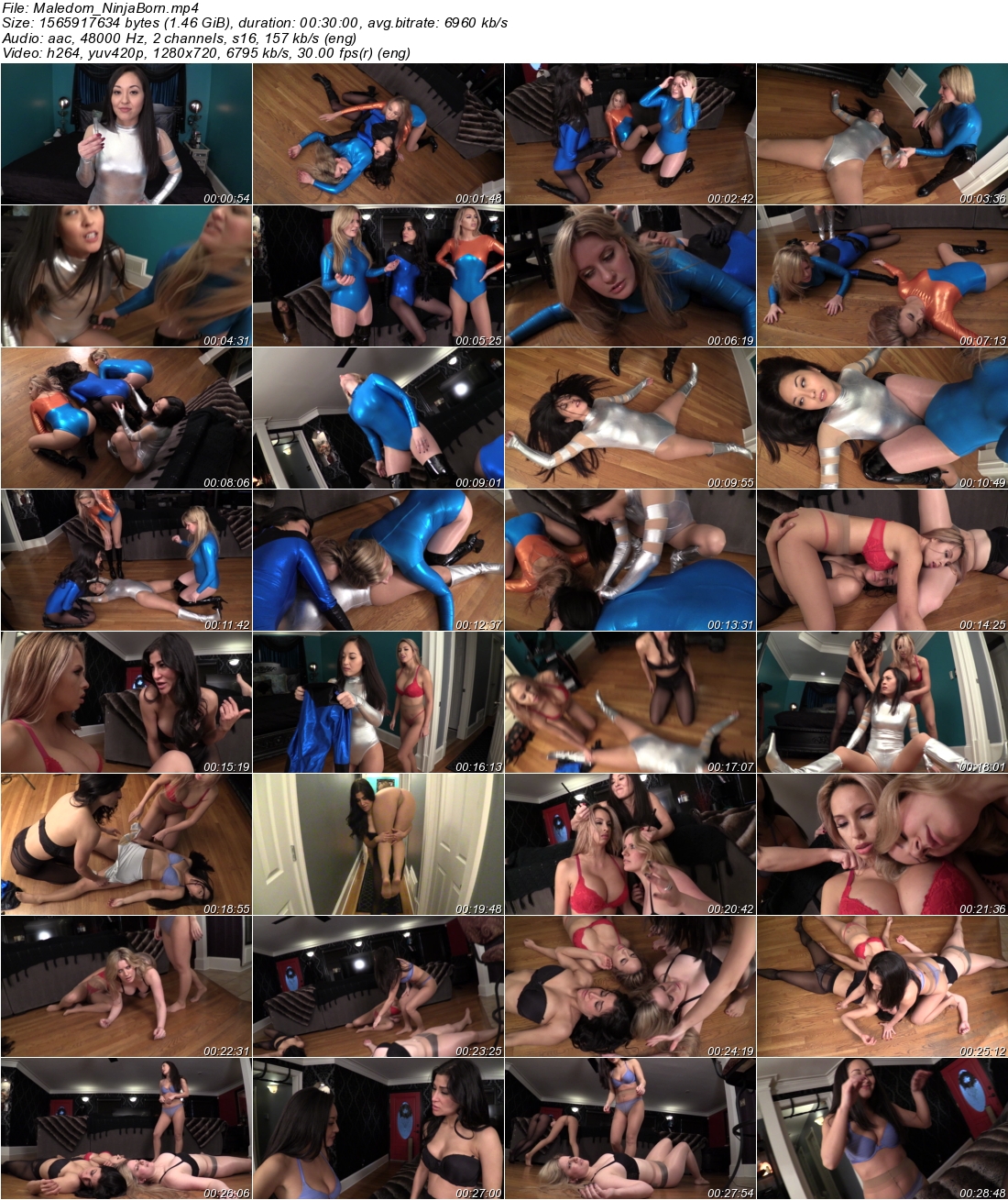 Starring Jacquelyn Velvets. Saya Savage, Lucy Purr, and Sumiko
Set years before the most current SUPER NINJA SHOWDOWN release, we fade in on the lovely agent Sumiko in the middle of her final trial before being accepted as a Super! She’s given a special serum designed to help her recover from knockouts quicker than any other human in existence. She down it and passes out, spread eagled on the ground as we cut to the Supers (Jacquelyn Velvets, Lucy Purr, and Saya) complaining about the “new recruit”. Quick as a snake, Sumiko suddenly attacks, delivering three brutal chops that downs all three girls! Sumiko hides as we see Jacquelyn come to and vow revenge. She finds Sumiko in her bedroom and attacks with a karate chop KO but is stunned when Sumiko comes to seconds later. Jacquelyn knocks Sumiko out again and again, until a final tazer attack seems to put her down for good. Jacquelyn reports back to her team, but the trio are taken out again by a sleepy-spray attack from Sumiko! The future Ninja toys with her prey, sending them back to Dreamland every time they wake up (seriously, folks, the amount of KOs here is astounding!). A huge kick to three jaws sends the ladies to the ground, derrieres pointing at the ceiling as Sumiko slaps their asses and leaves the scene. Jacquelyn comes to yet again and makes her way to Sumiko. ZThe two fight bu Velvets has the experience advantage. She traps Sumiko in an armlock and knocks her out with a huge elbow to the face. Sumiko’s serum kicks in and Velvets has to render unconscious again and again, until a final double pressure point jab to the heart puts Sumiko down long enough for Velvets to drag her back to her team. The trio inspect her body and Sumiko suddenly attacks, nailing a brutal TRIPLE KO with a forced head smash and kick to the face! The girls fall on TOP of Sumiko, however, knocking he rout and leaving a four girl pile on the ground.
Sumiko eventually comes to and decides to leave the ladies in a stripped down (and very compromising) body pile. Hilarity ensues as Lucy and Saya come to, angered at the humiliation, and decide to take Sumiko out themselves. Lucy attacks with a sudden standing breast smother KO, but Sumiko’s serum kicks in. The pantyhose-clad duo decide to have some fun, using back to back reverse face sit KOs and even a belly punch/head smash (into Lucy’s crotch) before applying a double neck pinch that seems to keep Sumiko down and out. Saya OTS carries her back to Jacquelyn, but as Lucy tries to wake the beautiful team leader up, Sumiko applies a reverse OTS carry neck scissors that stealthily puts Saya out! She then attacks Lucy and Jacquelyn with a double pressure point temple jab (using the chopsticks she later turns into one of her favorite weapons). Saya comes to but Sumiko attacks, finding pressure points in her glutes that send her back out. More KOs come for the trio as Sumiko realizes she not only DOESN’T want to be part of this team any more.she wants to make their lives a living hell just for FUN. She performs a TRIPLE smother (breasts, face sit, and HOM) before announcing to her boss that she just became the Supers’ worst enemy. She applies a sleepy lip gloss and sends each Super into a deep sleep, their derrieres propped up side by side on the couch as Sumiko takes her leave, destined to become the one of the worst thing that EVER happens to the sleepy trio!
This movie contains quick KO reactions, drugged drink KO, neck chop KOs, black jack KO, sleepy spray KO, neck pinch KOs, 3 girl kick KO, double neck chop KO, heart punch KO, breast smother KO, face sitting KO, belly punch/face sitting/head bum bump KO, inverted neck scissor KO, chop stick temple drill KO, punch KOs, knee strike KO, foot chop KO, face sitting/breast smother/hand smother KO combo, kissing KO, body piles, over the shoulder carry, dragging, butt slaps
tags:superheroine,superheroines,lesbian domination,lezdom,story line ,storyline,forced orgasm,submission,humiliation,super hero, super heroines ,superheroines porn,superheroine porn , superheroines adult movies,superheroines fetish,magic power,magic control,fantasy,lesbian sex,lesbian porn,lesbian bondage,spanking,lesbian bondage,slave,slavery,mistress,enslavment,catfight,cat fight,,female fighting,ring wrestling,female wrestling,Scissors,catfighting,cat fighting,catfight fetish