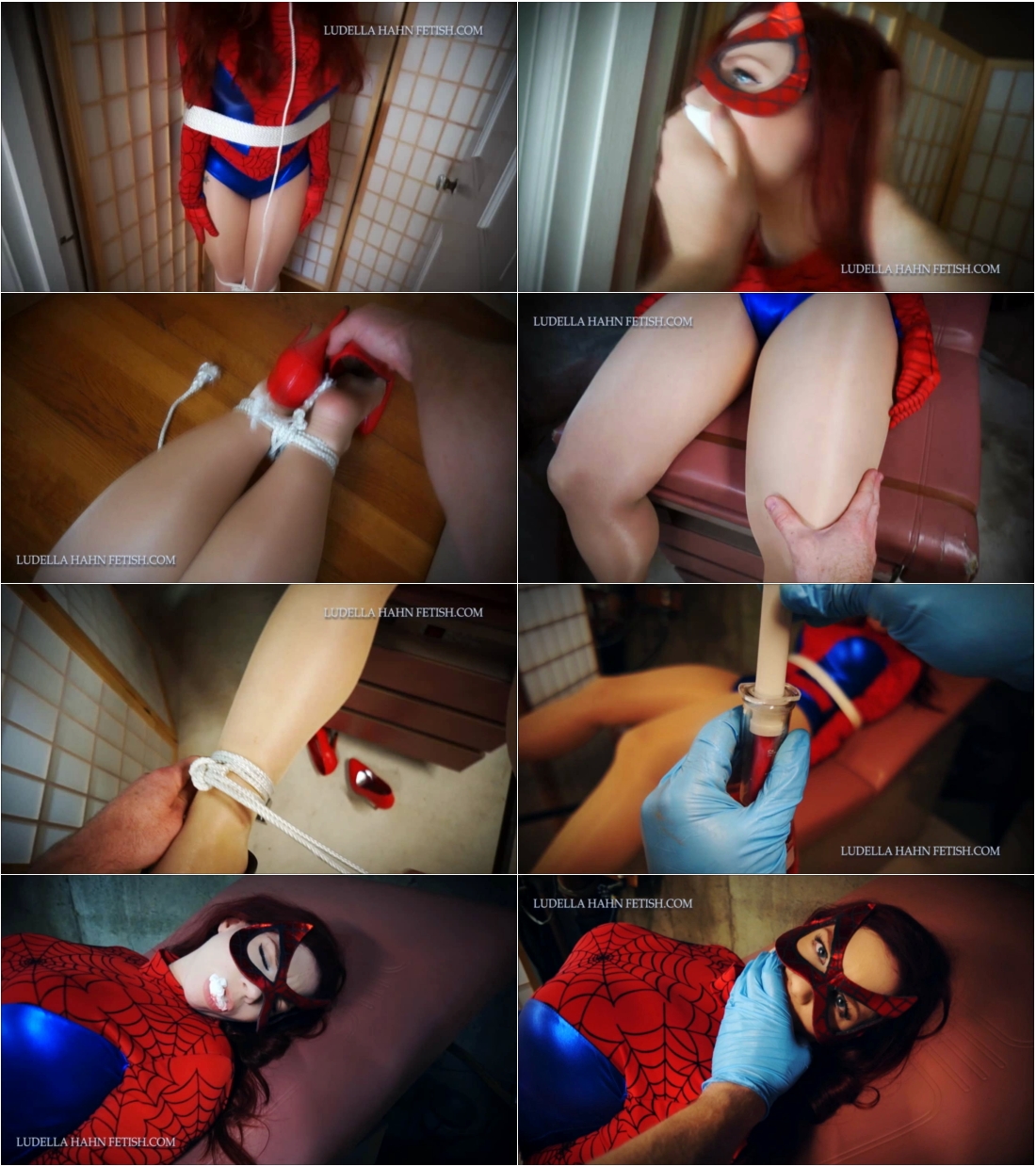 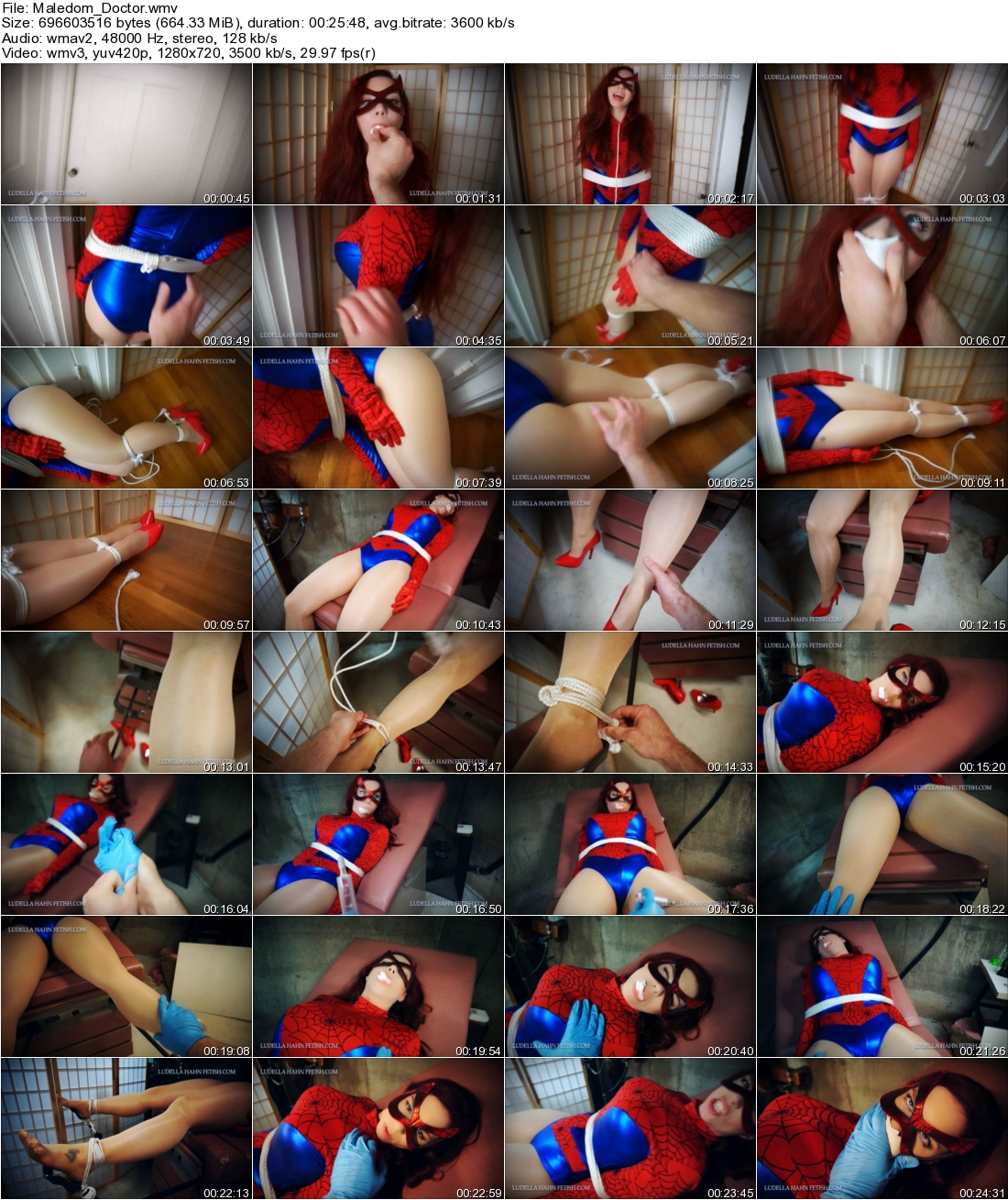 Clip Includes: Spider Hahn, Superheroines, Parody, Cosplay, Perils, Limp Fetish, Sleepy, KO, Leotard, Tight, Shiny, Costume, Sleepy Rag, Eye Crossing, Eye Rolling, Body Pans, Bondage, Stuffing Gag, Gagtalk, Struggling, Shiny Pantyhose, Nylon Feet, High Heel Removal, Close-ups, Curvy, Curves, Ludella Hahn, Contains NO NUDITY
The scene opens in an empty hospital wing. POV Doctor is looking over some charts when he hears banging and MMMphhing coming from a hallway closet. He’s surprised to find Spider Hahn tied up and gagged inside. He looks her up and down while she’s gagtalking for him to remove the gag. Finally, he understands and takes the stuffing out of her mouth. “Thank you, citizen. How did this happen? Well, I was entertaining the for charity when one of them wanted to see my web shooters. He accidentally shot me with the webbing, but then they all thought it was so funny that they continued to shoot at me. Then they tied me up with my webbing, gagged me, and put me in this closet while they all went off to the cafeteria for pizza. The webbing is of my own invention. I designed a formula that even I can’t break out of, so if you could kindly untie me… No, I am completely serious; I cannot break out of this.”
The doctor inspects the bondage around her ankles, knees, and waist. It is indeed tight, and he begins to get some naughty ideas about this tightly bound and helpless superheroine in shiny pantyhose and a skintight leotard. He begins to grope her as he pulls on the bondage. At first she thinks it’s just an accident, but then she gets more and more annoyed and begins to threaten him if he won’t untie her. Just as she’s about to scream for help, he uses a sleepy rag to put her out. Her eyes roll around as she can’t help but to inhale and soon she falls limply to the floor where he gropes her body and looks her over up and down from both sides. He must get her to a more secluded place…like the hospital basement…
He has her laying on an older hospital bed in his secret basement lab. She plays with her limp pantyhose legs before removing her shoes and inspecting her nylon feet. He plays with her limp body before tying her feet to the stirrups. She begins to stir as he’s finishing the last knot, but she’s very weak and delirious, so it takes her a bit to put it together. He calmly puts on his rubber gloves and fills a syringe with his special formula. Fear enters her eyes as she begins to realize that she can’t break free from her bonds to escape this devious doctor. He injects her inner thigh with the syringe and she spasms before falling limp.
He gropes her curvaceous body and shiny pantyhose legs and feet and she begins to moan softly. The formula he gave her has increased her pleasure center and lowered her inhibitions. Soon she’s writhing around and moaning louder through her gag stuffing. The doctor is afraid the noise will give away their location, so he removes the stuffing and puts his hand over her mouth. Her toes curl and she writhes with pleasure, reaching climax. She couldn’t stop it. It was that formula he gave her. Suddenly she becomes more lucid and realizes what’s just happened. She goes from feeling ashamed to angry, struggling hard against her bonds, but he puts the sleepy rag over her nose again. Her eyes flutter and cross as she falls fast asleep. He pans over her limp curvaceous and helpless body. What will he do next?
Category: SUPERHEROINES
Related Categories: LIMP FETISH, COSPLAY, PANTYHOSE/STOCKINGS, GAG TALK, HAND OVER MOUTH Keywords: spider woman parody, spider hahn, sleepy, cosplay, shiny pantyhose, sleepy rag, injection, eyecrossing, eye rolling, redhead, perils, ko, ludella hahn, gag talk, nylon feet
Tags:Maledom,Male Domination,superheroine,superheroines,Humiliation,storyline,story line,Mixed Wrestling,mixed fight,Submission,froced orgasm,super hero, super heroines,superheroines porn,superheroines adult movies