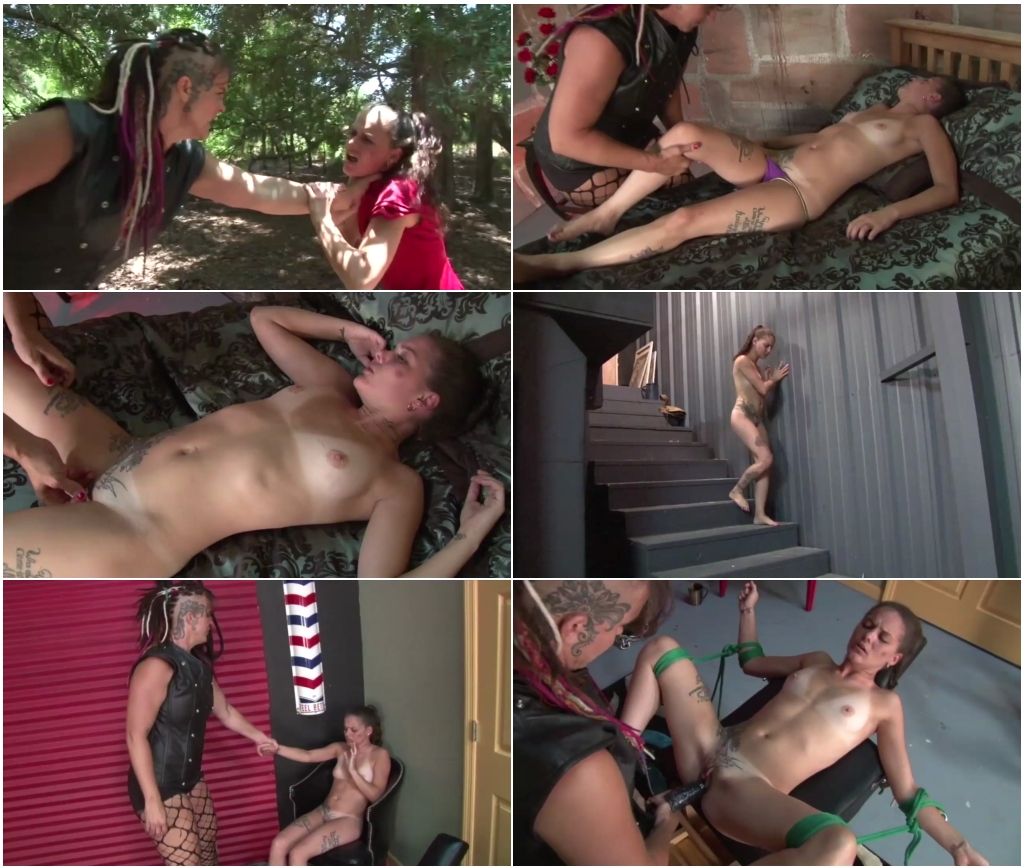 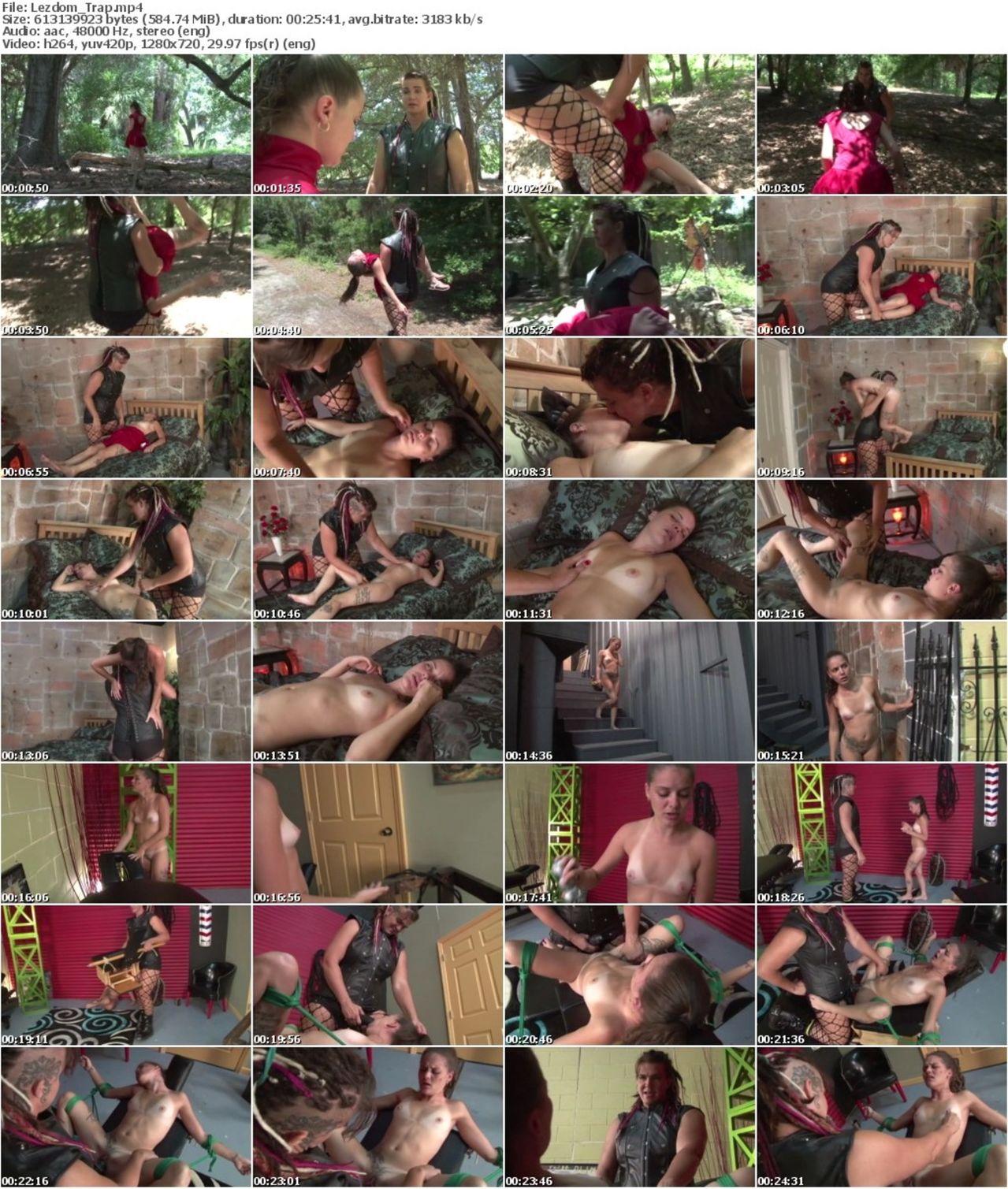 Michelle Peters has a problem. She keeps fainting all the time. She has seen so many doctors and no one has been able to help her. But someone just gave her a number for Doctor Saharra Huxly, a specialist that can help her. Saharra told her she lives in the woods so she can do her experiments in peace. So Michelle is patiently waiting, in the middle of the woods, for this weird Doctor to show up. Saharra has been watching Michelle from a distance to make sure she came alone. Eventually she reveals herself. Michelle doesn’t think this looks like any kind of Doctor and decides she doesn’t want the treatments and tries to leave. Saharra says “Oh hell no” and pulls her back by her skirt. Saharra lifts Michelle up by her armpits against a tree. Michelle faints as she is being let back down. Saharra wakes her back up and continues to Lift&Carry Michelle around. Michelle tries to fight back and Saharra just holds her at arms length by her head. Eventually Michelle faints and Saharra cradle carries her to her house in the woods.She carries her limp body into the bedroom and lays her on the bed. She gazes at her and is so happy for the specimen the universe has offered her. Slowly she strips Michell naked, caressing her body. She leans in for a kiss and Michelle awakens. Michelle is confused and scarred, and even a bit angry. She jumps up out of the bed and attempts to get through the door to her right. She barely gets to the door before Saharra grabs her, lift&carry’s her back to the bed and tosses her into it. Michelle struggles and tries to flea several times, each time getting lifted and carried in different ways and tossed back onto the bed. Eventually Michelle faints again and Saharra starts playing with this little naked woman she has at her fingertips. She plays with her breasts, slides her large hand across her belly and starts feeling her pussy. Michelle wakes and weakly struggles several times, but always faints again. She wakes and Saharra grabs her by the throat with her mighty hand and forces her back to the bed. She wakes for an orgasm and faints again. Saharra leaves the room, planing to come back and play with her some more.After the finger fucking session, Michelle finally awakens. She sees the door and decides to give it a try. Instead of to safety, it leads to some steps going down. She follows them and they lead to a very weird room. In it looks like all sorts of devices for sex. A massage table with bondage tie offs. Some sort of rocking fuck chair. Rope hung up on the wall. And a purple dick on a stick, which is strangely enough sitting with a pig mask. Where the hell is she? Saharra comes down the stairs with a cup in her hand. She startles Michelle by asking what she’s doing in here. She forces Michelle into a chair and makes her drink the “medicine” that’s in the cup. Michelle does so but then tries to leave, despite that she is now feeling very faint. Saharra tires of her antics and pics her up and slams her agains the wall by her throat. While up there, Michelle loses consciousness. Saharra lowers her to the ground, and slides the rocking fuck chair into the middle of the floor and leaves.Now Michelle is tied up to a rocking fuck chair and still asleep. She doesn’t see Saharra sitting in the chair behind her, with her giant monster black cock strapped on. Saharra rises and walks over to Michelle and wakes her up with a few well placed slaps with the monster cock on the cheek. Michelle awakens to see this thing in her face and to realize that she is tied into this chair and can’t get out. Saharra starts this round of treatments with some mouth stuffing. How much of that monster can Michelle take in her mouth? How much slobber will she produce to help it slide in? Let me tell you, this girl slobbers like a champ. After having a good round of mouth fucking, Saharra moves on to Michelle’s pussy. It’s good and trapped now and spread open for Saharra’s “treatments”. Will this help Michelle to stop fainting? Who knows. But it will be a whole lot of fun for Saharra to play with. She really likes fucking tiny girls.
Category: AMAZONS
Related Categories: LIFT & CARRY, LESBIAN DOMINATION, STRAP-ON, BONDAGE, STRONG WOMEN Keywords: amazons, humiliation, strong woman, lift & carry, bondage, strap-on, lesbian domination, female orgasm, forced orgasm
tags:lezdom,lesbian domination , pussy slap,strapon,humiliation,submission,bondage,bdsm,amzaon