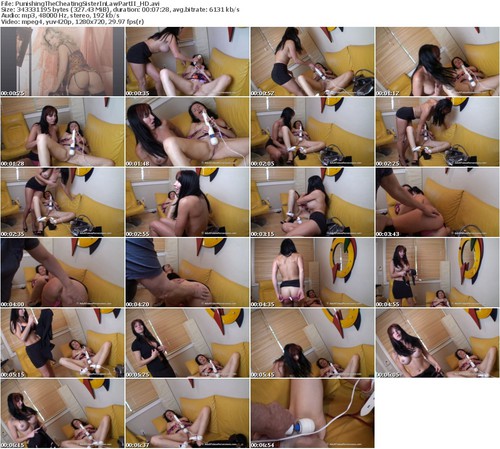 Stella forces Tatiana to two more orgasms with the magic wand. Tatiana’s husband suddenly walks in on them, home earlier than expected. He is furious when he sees what his sister is doing to Tatiana. Stella tries to convince him that Tatiana is a slut who is fucking around. He does not believe it. He forces Stella on the sofa with Tatiana and orders her to lick Tatiana’s pussy. When she refuses, he pulls down her panties and spanks her beautiful ass. Hard. Stella screams in pain. Tatiana screams out her orgasm. Stella is upset that her brother spanks her and even touches her pussy. Her own brother, who forces her to lick Tatiana to another orgasm. And just minutes ago Sella had the upper hand, punishing her slutty sister-in-law whom she caught cheating on her beloved brother. And he does not believe her. He tells her to get dressed and get out. He demands her bra, her panties and her top. Stella is incredulous! Her brother makes her walk out of his house topless, without panties, her ass red and hurting! And all she wanted to do was to show him what a cheating slut his wife is!