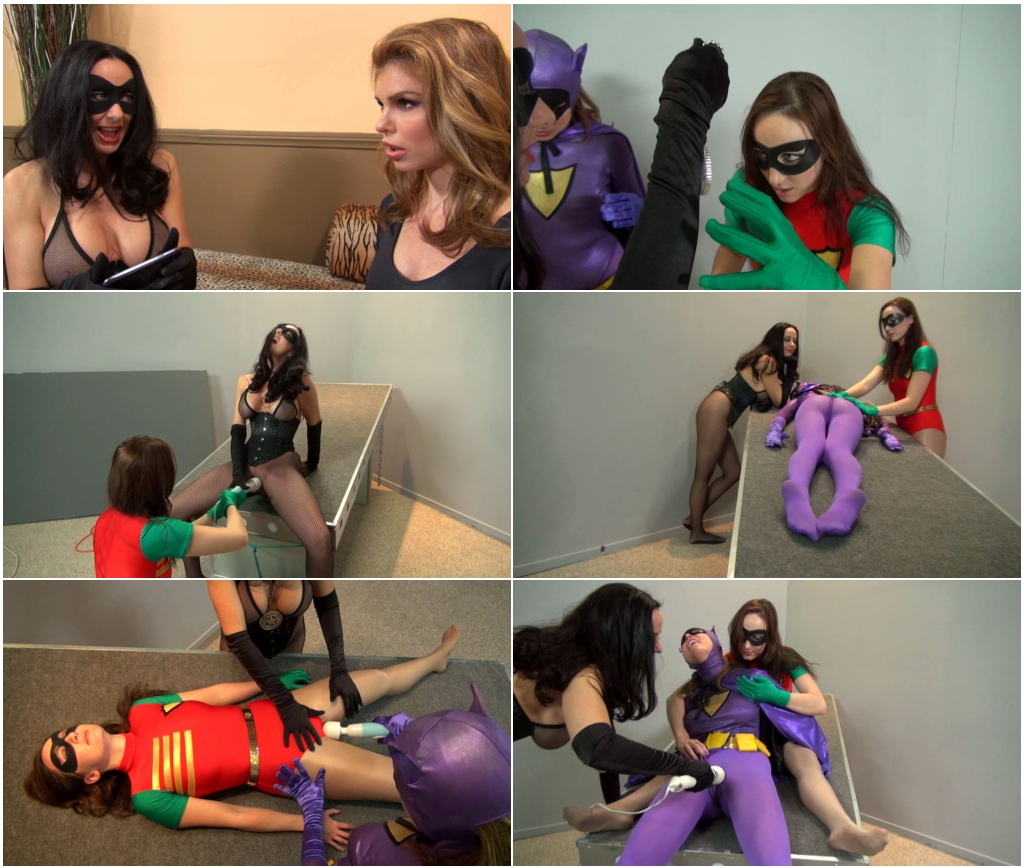 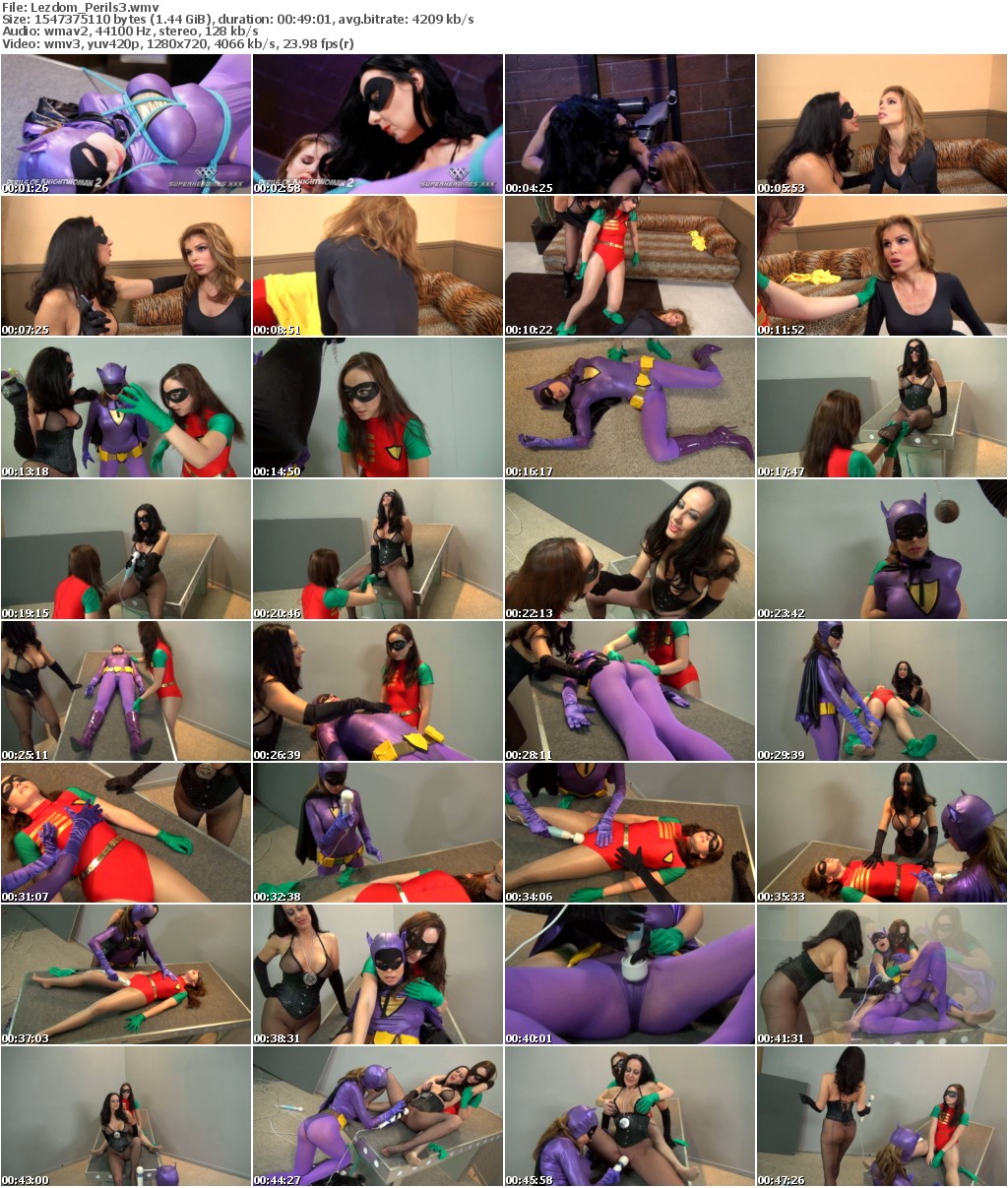 We pick up right where Peri1s Of Knightw0man Part 2 ended… with KnightWoman’s faithful side-kick Robyn tracking her locator beacon right to the fiendish foe Mystique’s lair. Robyn finds the source of the beacon hidden inside KnightWoman’s utility belt…but unfortunately, The Dark Knight is no longer wearing it! Robyn races off to find her partner!

We find KnightWoman being led into Mystique’s inner sanctum where the vile villainess takes the opportunity to grill her new mindless slave about her secret identity. Still under Mystique’s entrancement spell, KnightWoman fights hard to keep her alter-ego’s name to herself, but slowly obeys her mistress’s commands to answer. “My…name…is…Alexandra…Jane” she reveals. Being the new villain in town, she’s unaware of who Alexandra Jane is. Mystique quickly digs out her phone and Googles it…only to find out her new sex slave is none other than Arkham Height’s most rich & famous socialite, and president of Jane Industries! She questions KnightWoman about the Knight Cave, which Alexandra willingly offers, “Is located directly underneath Stately Jane Manor”.

Mystique is thrilled at her fantastic luck, having captured such a valuable asset…and Arkham Height’s most famous superheroine all in one trap! Her thoughts quickly turn to a huge ransom pay day as she gives KnightWoman a nice smooch on her exposed breast. But her big plans are momentarily delayed when The Girl Wonder enters the inner sanctum, looking to rescue her crime fighting partner.

Robyn is confused when she sees the entranced KnightWoman in Mystique’s black spandex bodysuit, but vows to free her cohort and take Mystique to jail. Mystique gives a hearty laugh and commands KnightWoman to take Robyn down!

Robyn tries to shake KnightWoman out of the spell but is thrown across the room onto the sofa in one quick motion by her former friend. Robyn is grabbed from behind as KnightWoman attempts to choke her with her own cape. Robyn manages to slip free but is soon clocked with a round house punch that sends her reeling. KnightWoman winds up for a final blow, but the perky side-kick ducks under the wild swing and gets KnightWoman into a rear choke hold. Reluctantly, Robyn is forced to send her partner off to dreamland. “I’m so sorry” she says as she gently lays her friend to the floor.

Mystique then catches the Girl Wonder off guard with a sneak attack of her special cloth. She pulls Robyn in tight as the fumes do their thing…and soon Robyn joins KnightWoman on the floor in an involuntary slumber. Mystique laughs at the Dynamic Duo, and tells them she is off to go explore the Knight Cave!

KnightWoman & Robyn awake…and it seems Robyn’s choke hold has temporarily freed her from Mystique’s spell. The two race off to the Knight Cave to take the slippery siren down. Mystique is waiting for them, having found one of the weapons confiscated from the Jokester…a mystic bubble spraying that freezes whomever the bubbles touch in place. KnightWoman & Robyn arrive as planned and Mystique unleashes the bubbles upon them. The Caped Crusaders are no match for the Jokester’s toy and are soon frozen rigid like statues.

Mystique takes this opportunity to entrance Robyn with her magical medallion right in front of the helpless KnightWoman. She swings the medallion back & forth before Robyn’s eyes…unable to keep her eyes from following it. After a lengthy induction, Robyn falls helplessly under Mystique’s evil control…and her first command is to send the frozen KnightWoman back off to dreamland.

With the Dark Knight incapacitated, Mystique quickly makes her new slave worship her boots and feet. Robyn mindlessly obeys her every command, licking her boots and fondling her feet. She then orders Robyn to use her vibra-wand to satisfy her misstress’s desires. Robyn brings Mystique to a loud climax, which stirs KnightWoman from her slumber.

The still woozy KnightWoman confronts Mystique who commands Robyn to hold her in place…as she uses the the medallion once again to bring Alexandra back under her wicked spell. KnightWoman is powerless to resist the effects of the magical medallion, and soon is ready to do Mystique’s bidding.

Mystique has KnightWoman lay on the interrogation table and commands Robyn to take off her boots and worship her partner’s pretty, pantyhose encased peds. She then delights in forcing Robyn to grope her partner’s tits and ass. Mystique than has them trade places and lets KnightWoman have her way with her faithful ward. She removes Robyn’s slippers and tickles, licks and sucks on her tiny feet. She then gropes the Girl Wonder’s vulnerable body…squeezing her tits and running her tongue over her partner’s perfect ass. Mystique is enjoying the lewd display and commands KnightWoman to use the vibrator on Robyn’s pussy.

The Dark Knight first runs the wand between Robyn’s spread legs as she lies face down on the table…and soon Robyn is helpless but to lift her ass off the table to position her sweet spot perfectly on the buzzing device….humping it as she whimpers with delight. They flip Robyn over and pull her leotard to the side, as KnightWoman brings her partner to several body shaking orgasms.

Mystique hops up on the table and lies back into Robyn’s waiting arms as KnightWoman glides the Hitachi over her fishnet covered snatch. Robyn plays with her misstress’s supple nipples as Mystique grinds her clit against the vibrating head. Soon she is filled with lust and has several explosive climaxes that leave her a hot mess sprawled across Robyn’s wet lap.

She thanks her two slaves for the show and sends them both back off to dreamland in a heap… and Mystique slinks off into the night.