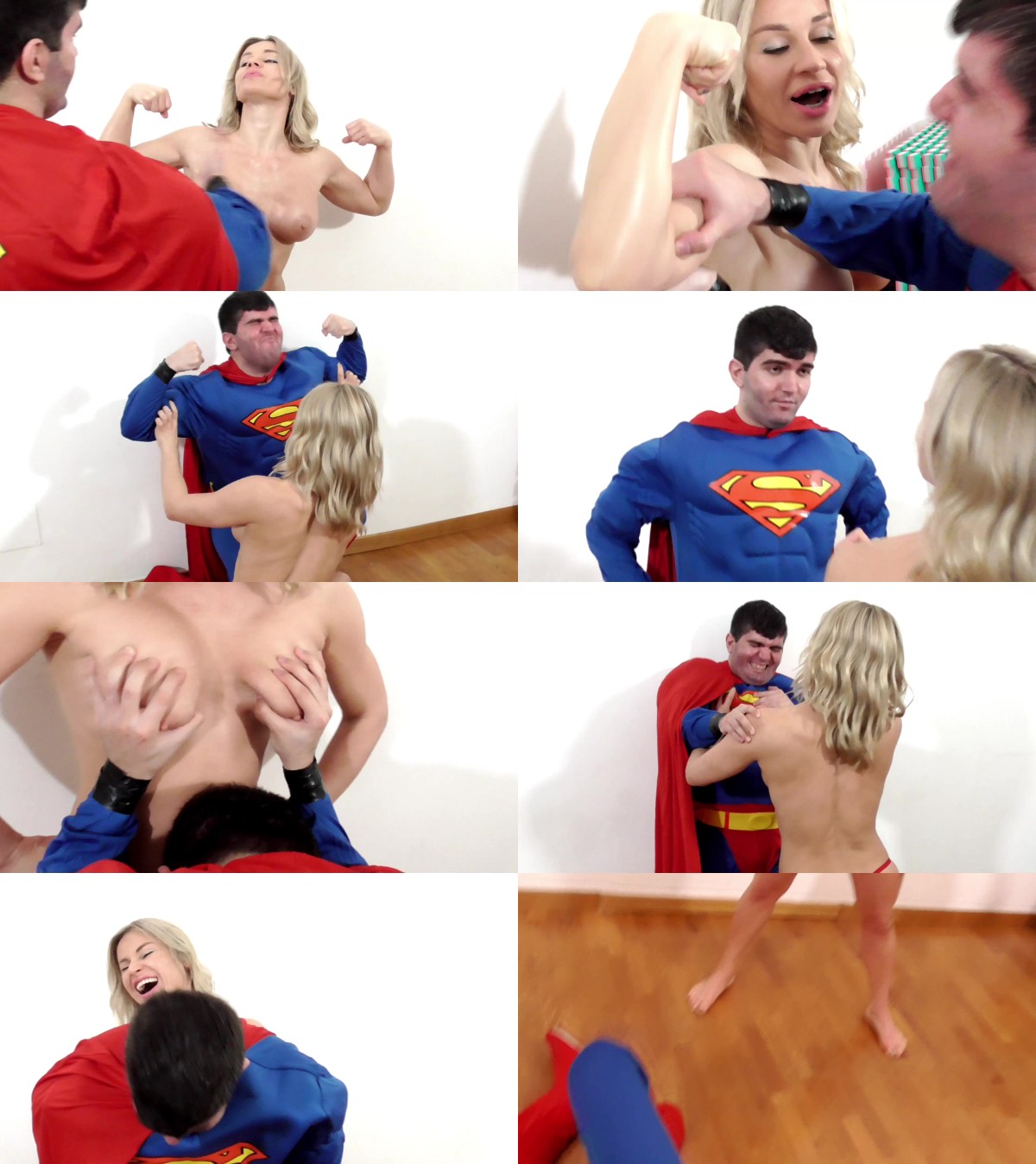 Pamela is the strongest being in the universe and she knows it very well, so she started to spread the world that Superman is just some kind of pussy and weak boy. Superman heard about this “nonsense” and comes to challenge her. Pamela is topless, showing off her amazing body while he arrives, she mocks him and tells him that he wouldn’t be able to even squeeze her biceps, Superman can’t believe it and tries… So strong! Superman isn’t able to make her flinch while trying to squeeze both her biceps, even one with both hands. It’s Pamela’s turn, and she brings the boy down without a sweat. Superman believes there’s some kind of trick so he decides to punish her punching really hard on her boobs and abs, to which Pamela replies with a light-hearted laugh. Superman grabs her boobs and squeezes really hard, with no result. Pamela is tired of this non-sense so she punches and squeezes him to the ground while Superman screams for the unexpected pain. He’s becoming furious, so he bearhugs her and lifts her up while she laughs for his useless efforts, taking the occasion to flex and show her gorgeous legs. When he’s done, suffering for the fatigue accumulating, she lifts him up in a bearhug too, squeezing his “steel abs” and making him scream like a bitch. Pamela uses Superman as a boxing bag, with uppercuts and speedbag punches. He is done, so he decides to bring her down with the most powerful punch he ever delivered, accumulating all his strength to defeat this monster… But Pamela stops it with just one finger, making him realize he has no chance with her. To make him learn the lesson, she brings him to the ground and beat him up with punches, kicks and her powerful legs. After he begs for mercy, she let him fly away, laughing and enjoying his meaningless efforts…
Category: STRONG WOMEN MUSCULAR WOMEN, MUSCULAR THIGHS, FANTASY WRESTLING.
Keywords: pamela, superman, fantasy, custom, punches, biceps, muscles, bearhug, boobs.
tags:superheroines fetish,superheroine porn,humiliation,superheroines adult movies,fantasy mixed wrestling supergirl,femdom fight