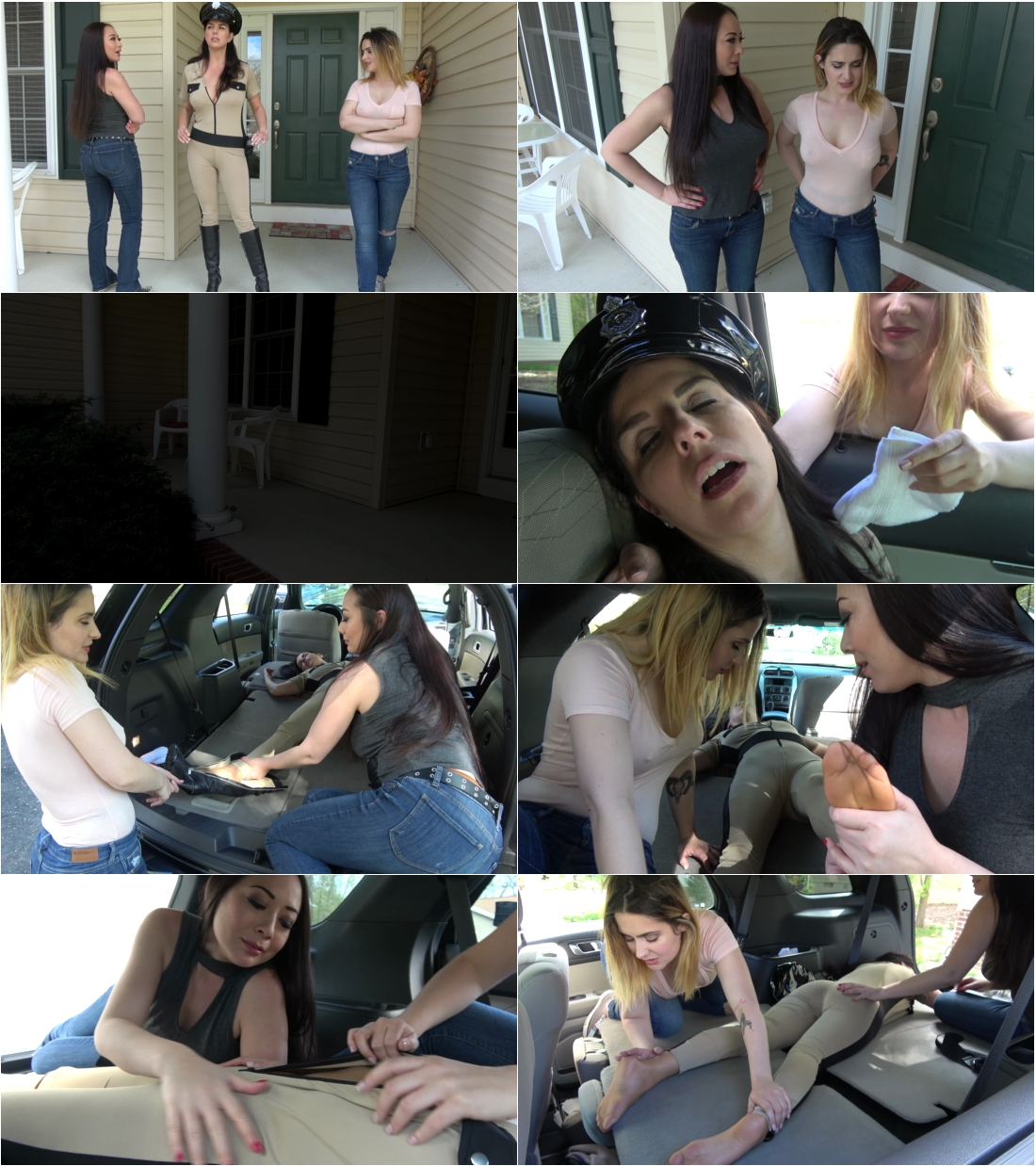 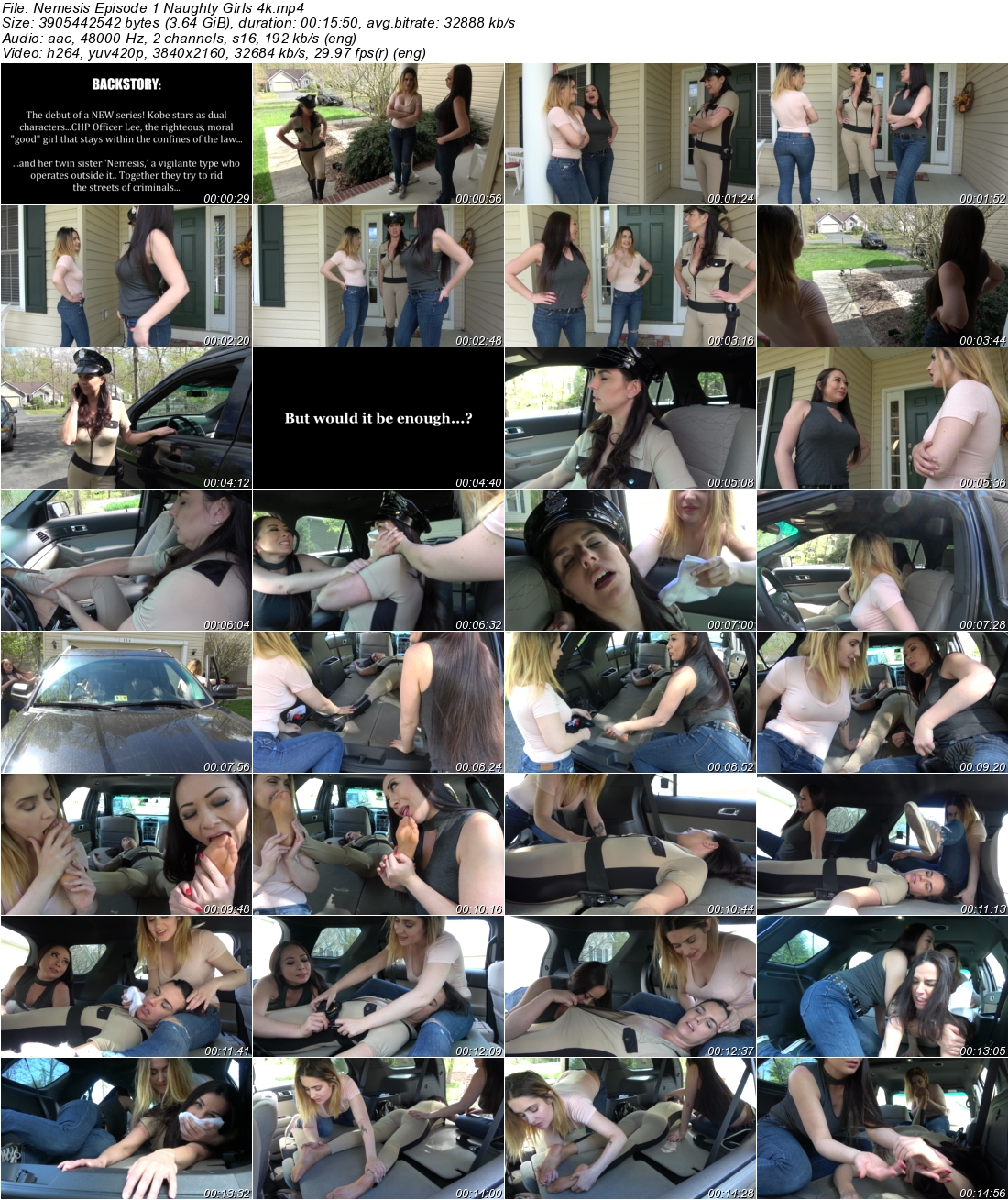 Here is the DEBUT of a brand NEW series I’m doing (exclusive to Heroine Universe, as always) called "Nemesis." It features Kobe Lee as the title character (actually, playing 2 characters!). Kobe plays a pair of twin sisters, one a CHP Officer, a righteous and moral woman who dispenses justice via her job, and her twin sister named "Nemesis," a vigilante type who cleans up the messes that her sister can’t handle, usually in a naughty fashion. This series will be available episodically, meaning each new episode will build upon the previous story-lines, so to get the most out of the series, make sure to follow and purchase each episode as it’s released to gain the full story.
In this debut episode, we see a pair of naughty girls (Tilly McReese and Nyssa Nevers) on their porch talking about all the awful things they’ve been doing to girls lately (sex slavery talk), as CHP Officer Lee walks up on them. She’s there in a goodwill type visit. She knows the girls are up to no good, and she’s there to tell them to change their ways. But almost immediately, Tilly and Nyssa begin sizing her up. They even comment that she’s not wearing a service weapon, and that she’s a "fake cop." They continually tease Officer Lee about what they’ve done, as well as her body. After listening to them, Officer Lee is disgusted, and as she walks away, gives them a bit of advice, lest them be visited by "Nemesis." The girls have no idea what she’s talking about.
We learn (through text scrolls) that the girls were paid a visit by Nemesis, who extracted a confession from them (to be seen in a future episode through a flashback sequence – look for this in the future!). We open with Officer Lee in her police truck getting a call from the precinct. She learns that Tilly and Nyssa were, in fact, let go on bail. She can’t believe it, even after a confession! Clearly Nemesis didn’t do a good enough job. At that very same moment, across town, Tilly and Nyssa are returning from their ordeal (eluded to in the text above). They talk about how they can’t believe they were let out on bail, and how they gamed the system. The girls realize that in order to get revenge against Nemesis, they need to track down Officer Lee, who clearly knows how to get in touch with her and must have been behind setting them up.
Back in her police truck, later that same day, Officer Lee is resting from an exhausting day, when both Tilly and Nyssa AMBUSH HER! She struggles with them, but is put out with something after a struggle. The girls transfer Officer Lee’s limp body to the passenger seat, and driver her away. At their new location, they put her in the back, and then begin a long session of fun. Before they get her inside the house to interrogate her, they want to have some fun w/ the sexy captured cop. They REMOVE HER BOOTS, WORSHIPING HER NYLON FEET. When Officer Lee begins to come around, they use something on her to put her back out. They remove her belt, and again more fondling and play. She wakes a final time, trying to escape out the truck, only to get caught and put out after a struggle. In the end, they decide that they’ll need to secure her. Continued in the next episode 2, where "Nemesis" makes her first appearance!
Category: FOOT WORSHIP
tags:superheroine,superheroines,lesbian domination,lezdom,story line ,storyline,forced orgasm,submission,humiliation,super hero, super heroines ,superheroines porn,superheroine porn , superheroines adult movies,superheroines fetish,magic power,magic control,fantasy,lesbian sex,lesbian porn,lesbian bondage,,lesbian strapon,spanking,lesbian bondage,slave,slavery,mistress,enslavment