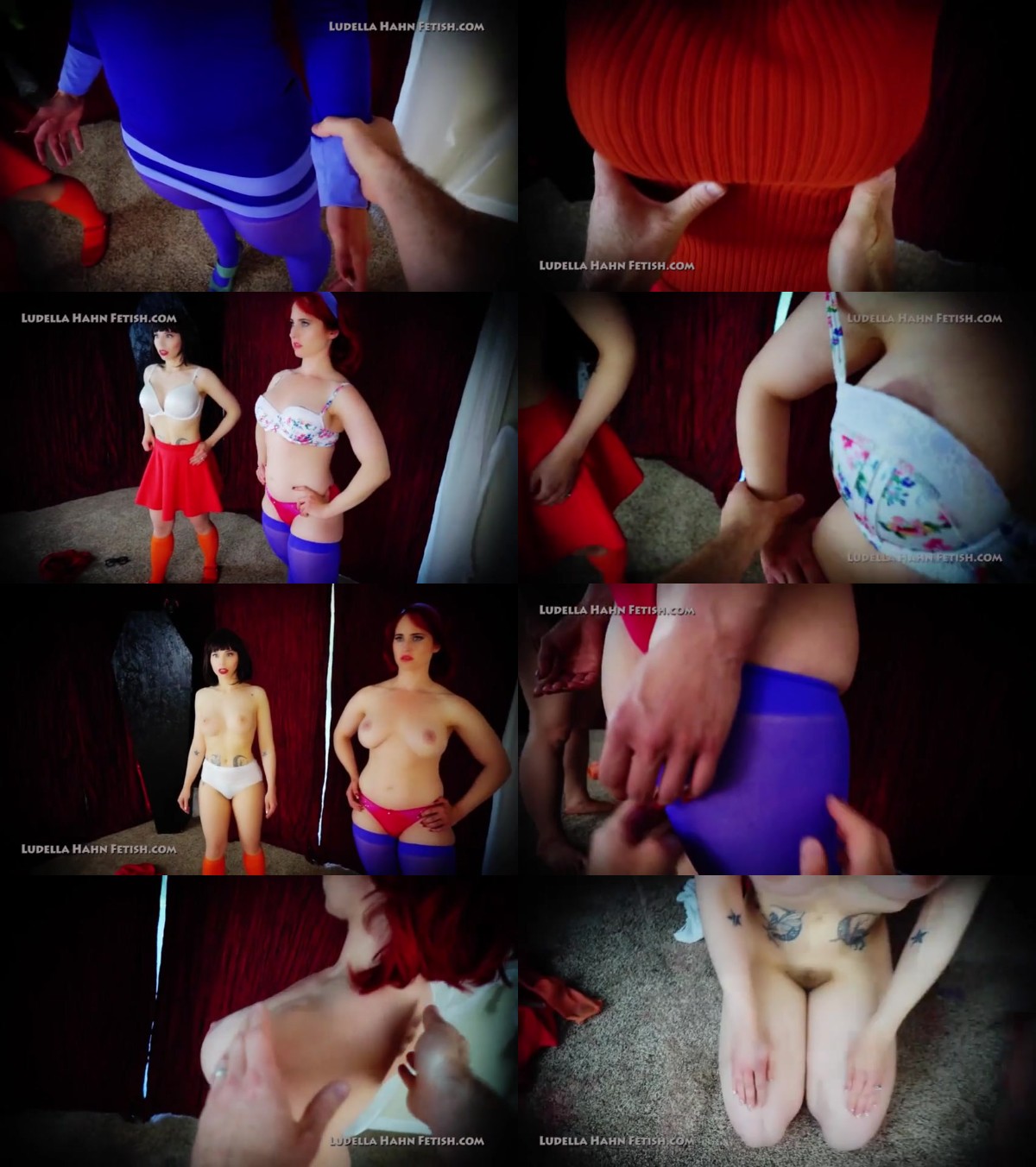 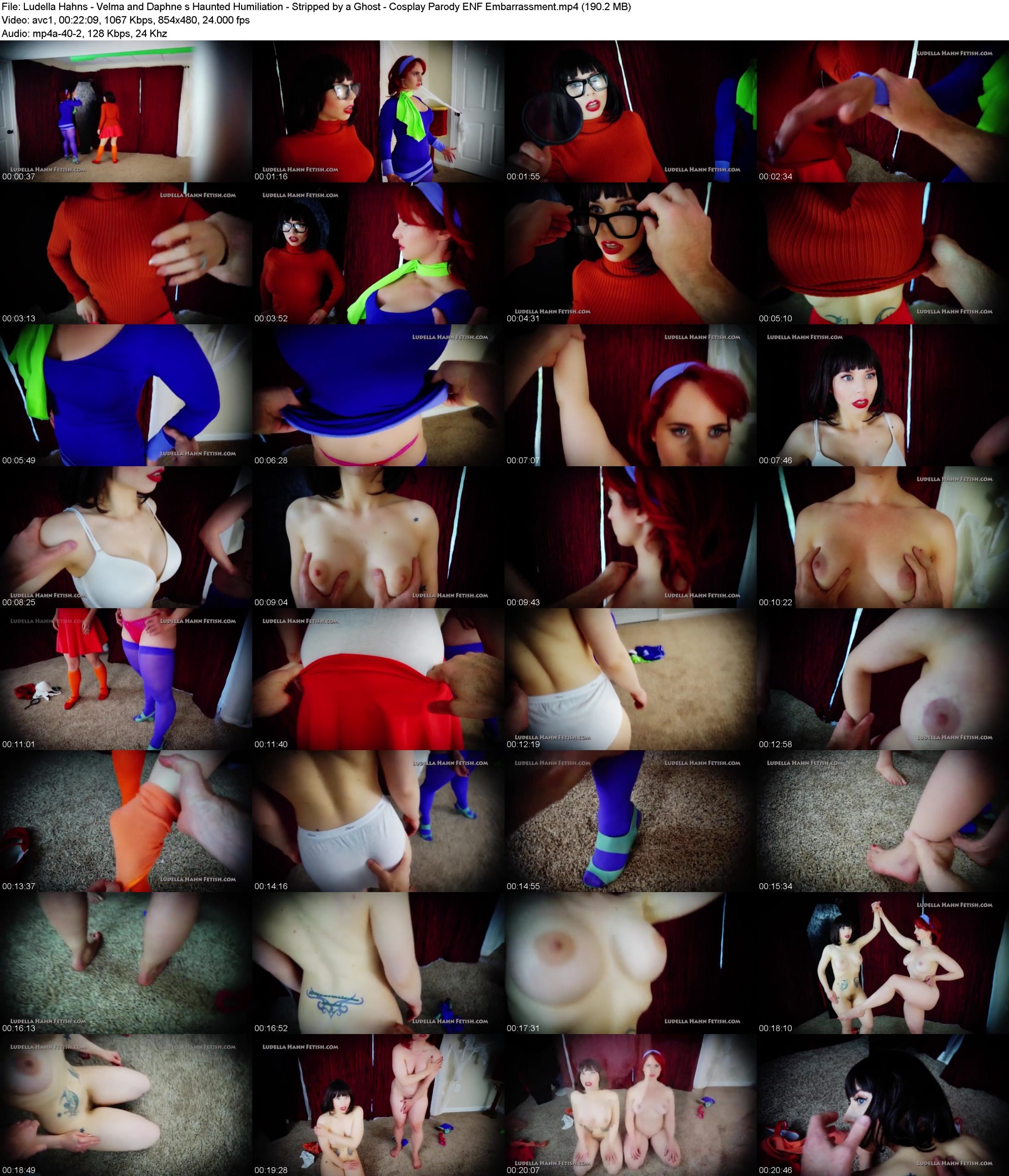 Velma and Daphne are investigating a creepy supposedly abandoned house for a case. They’ve split up from the boys who will meet the there later. When Velma knocks the door creaks open. "Hellllloooooo?" They call, but no one answers.
"I guess it’s empty. We should probably split up to cover more ground."
"Good idea, Velma."
"I’ll go this way."
"And I’ll go this way."
Daphne walks through the gallery when she notices her reflection in the mirror and stops to primp. She doesn’t notice her scarf disappear and continues on her way when a ghostly face appears in the mirror. Meanwhile, Velma heads into the library and investigates the book titles with her magnifying glass. She turns away just as the eyes in the statue light up green.and then her sweater disappears with a POOF, taken by this slick spirit.
The girls continue to explore the house as their clothes disappear one by one. Finally, when Daphne has made her way into the library and she’s down to just her bra and panties, she gets a chill, and upon wrapping her arms around herself she notices her dress is gone and panics. "Where did all my clothes go? Oh nooo!" She squirms, trying to hide herself. "I need to find my clothes. Velma? Velma?!" She scurries off.
Meanwhile, Velma is investigating the dining room when she happens to catch a reflection of herself in the chandelier. "It’s funny.it almost looks like I’m just in my bra and underwear in that reflection," She chuckles, looking down at her chest and immediately her face changes to a look of horror. "Jinkies! I AM in just my bra and underwear! Where on earth did my clothes go?" She squirms around. "I need to find them before Daphne or the gang sees me.this is so embarrassing." She scurries off, trying to hide herself with her hands.

Both Velma and Daphne end up in a strange room together without realizing it until they back their butts right into each other, giving themselves a SPOOK. "Waaah!" They both jump, turning around to face each other. "What are you doing in your underwear?"
"What are YOU doing in YOUR underwear?"
"I don’t know.my clothes just keep disappearing."
"Well, there has to be some logical explanation-"
"Vvvelma.." Daphne point to a ghost that has just descended into the room between them and Velma turns to face it. "G-g-g-g-g-GHOST!!!" They yelp in unison. With another POOF their bras disappear and their attention turns to their bare breasts. "Jinkies! How is this possible.?" Velma and Daphne cover themselves quickly, but the ghost has disappeared. When it reappears it takes their panties and leaves them BUTT NAKED.
"What are we going to do? The Mystery Machine is parked down the street..we can’t make it there like this and we need to do SOMETHING before the boys get here. It would be so embarrassing if they see us like this!"
They squirm and struggle to keep all their parts hidden, fearful of being seen and what this ghost might do next. There are shots of both girls’ full bodies together as they turn this way and that, attempting to hide without real success.as well as shots of each girl closer up from the ghost’s POV. After quite a bit of squirming nervously, Daphne decides to make a move, "Let’s head out the way that I came in.."
But the ghost snatches Velma’s glasses. "Oh no.my glasses! I can’t see anything without my glasses!" Daphne doesn’t see this happening and thinks that Velma is right behind her, so she continues on her way. "Daphne! Daphne!" Velma stretches her arms in front of her reaching for someone who isn’t there. "Oh no..I need to find my glasses." She gets on her hands and knees, crawling around with her hands searching the ground in front of her in hopes that she’ll find them.and then realizing she’s still fully nude, so she tries to hide herself with her hands instead. She goes back and forth like this between exposing herself to find her glasses or hiding her naked parts but being left further behind. "Ohhhh.Daphne! Where are you? I can’t see anything." Velma tries to follow the sound of Daphne’s voice in the distance while the ghost watches her fully nude body struggle. Mwuahahaha!
superheroine porn,superheroines fetish Hypnosis, Mind control, Mesmerize, Humiliation, Fetish Adventures