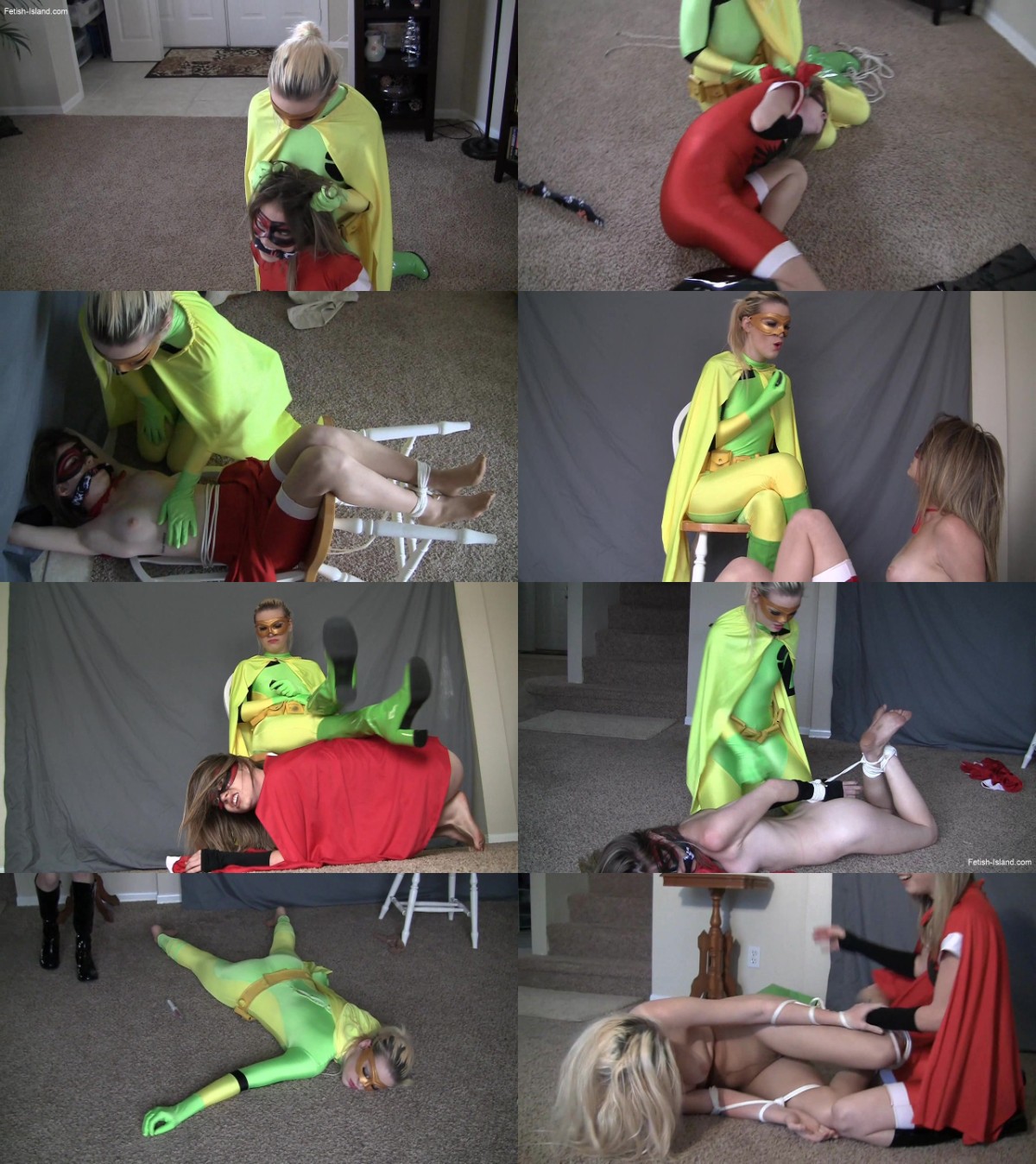 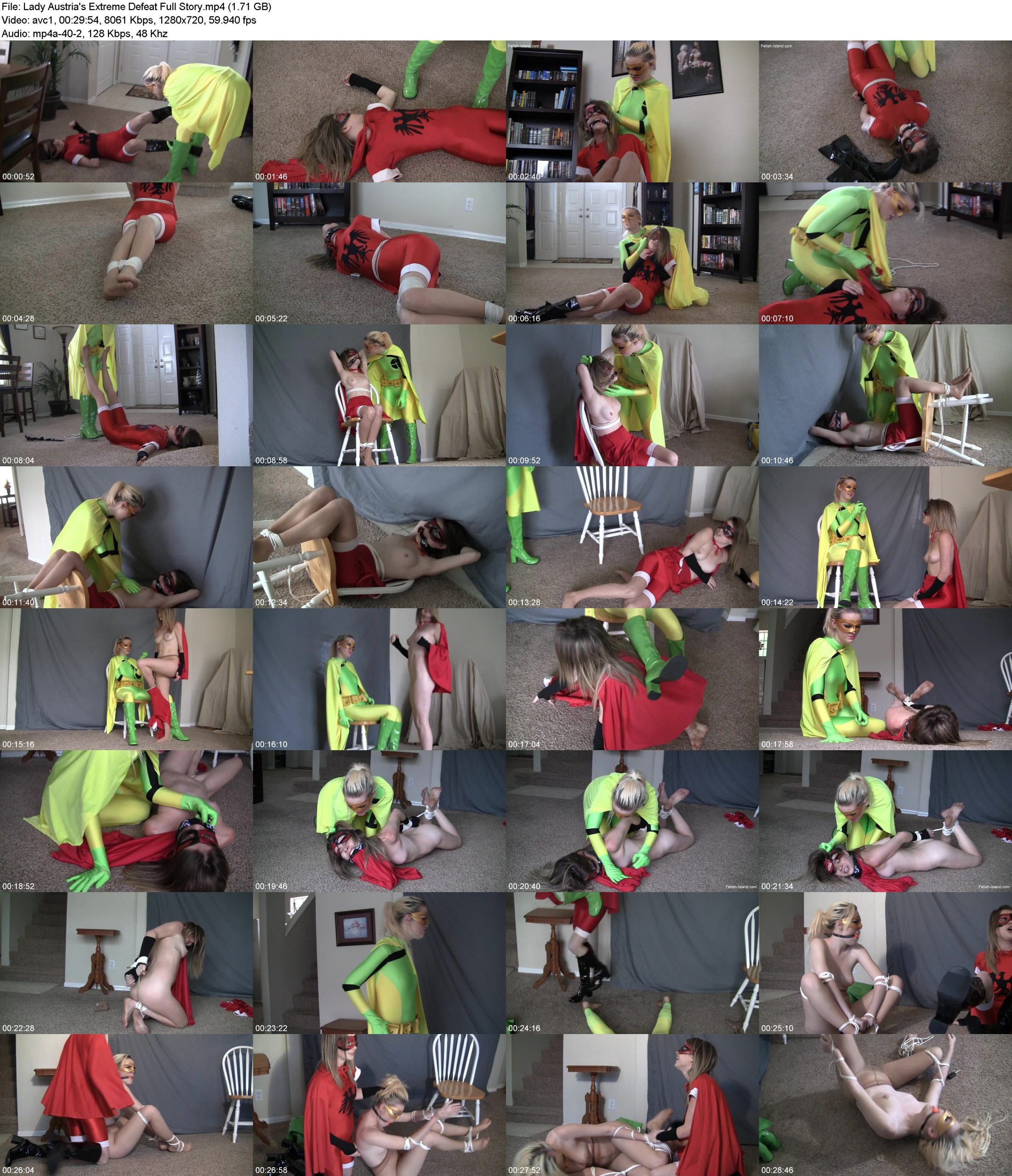 Young Lady Austria (Ariana Rose) was sent to look into a series of robberies. The items that were being stolen were priceless pieces of art. So with some asking around of informants and what not, Lady Austria was able to find a house that the art thief was staying in. Letting herself in, full of the confidence a super heroine has, Lady Austria made not attempt tp hide her arrival. Suddenly, she was confronted by the super villain known as Extrema (Amanda Bryant). Extrema is one of Tiedsvilles most dangerous villains but Lady Austria was not concerned. But she probably should have been. Extrema attacked the young heroine and gave her a nice and painful beat down. Lady Austria was not able to defend herself or stop Extremas attack. After some time the young heroine lay on the floor helpless. Extrema removed her boots (on screen) and then tied up and gagged her. Then Extrema announced she had other plans and left the bound and gagged heroine to ponder her future.

When last we left her she was bound and gagged at the hands of the evil Extrema had left to go take care of some business, luckily or unluckily depending on your point of view, returned just as Lady Austria was escaping. She pounced on the young heroine and a battle began once again. Poor Lady Austria, she was attacked from behind and was once again no match for Extrema. She fought valiantly but in the end she was simply no match for Extrema! Extrema was perturbed that Lady Austria hand managed to get away. She dragged the heroine (on screen) into the other room. Next Extrema ties Lady Austria to a chair and to try and keep her still she exposes the sexy heroines pert breasts. Extrema then begins her interrogation. Once again despite her rough handling, Extrema can get nothing out of Lady Austria. This makes Extrema so mad she knocks the chair backwards onto the floor! After some more interrogation, Extrema gets frustrated and leaves Lady Austria. The young heroine struggles to get free before Extrema returns.

Lady Austria managed to get loose. But before she could make good her escape, Extrema caught her again. Extrema pushed and pulled poor Lady Austria back into the room and pushed her roughly to the ground. After some more useless banter, Extrema once again uses coercion to poor Lady Austria to comply with her demands. Lady Austria is to humiliate herself because Extrema has a device that can set off a bomb. The bomb is located somewhere in the city and there is no way Lady Austria can do anything to stop it. So she eats her humble pie and allows herself to be humiliated by Extrema. She is to strip. Then once totally nude she is to kneel at Extremas feet. Then she is toc rawl around Extremas feet like some kind of pet. Each time the young heroine resists the bomb threat is renewed!After some time, Extrema uses poor Lady Austria as a foot rest. Then she grows tired of the drama and hogties and gags the poor heroine. Once hogtied, Extrema begins to Lady Austria a bit. She twists the little heroines nipples to make her squeal. More of this goes on even some threat of un-masking. Finally Extrema leaves and the nude hogtied super heroine struggles once again to get free.

Lady Austria had been beaten down one time to many. She was tired of being Extrema’s bitch. Extrema, had proven too difficult to simply exchange punches with. So this time around, Lady Austria decided on trying a typical villain move. A syringe full of something to help a person rest was what this called for. So when Extrema returned, Lady Austria hid and jumped out from behind and injected the napping potion into the surprised villains neck. Extrema struggled and stumbled around until she drifted off to rest.

Lady Austria removed the napping villains boots and then her costume. When Extrema woke up from her nap she found herself semi nude, tied up tightly and gagged. Then it was Lady Austria’s turn for some humiliating . She gave it to Extrema just as good as had been given to her. Finally as the Tiedsville police were arriving, Lady Austria took off. The police found Extrema wrapped up nice and tight for them.
Categories: BONDAGE , STRUGGLING , SUPER VILLAIN , GAGGED WOMEN , ROPE BONDAGE
Keywords: amanda bryant
tags:superheroine porn,superheroines fetish,superheroines adult movies,fantasy,lezdom,lesbian domination,catfight ,submission,humiliation,overpowered,facesitting