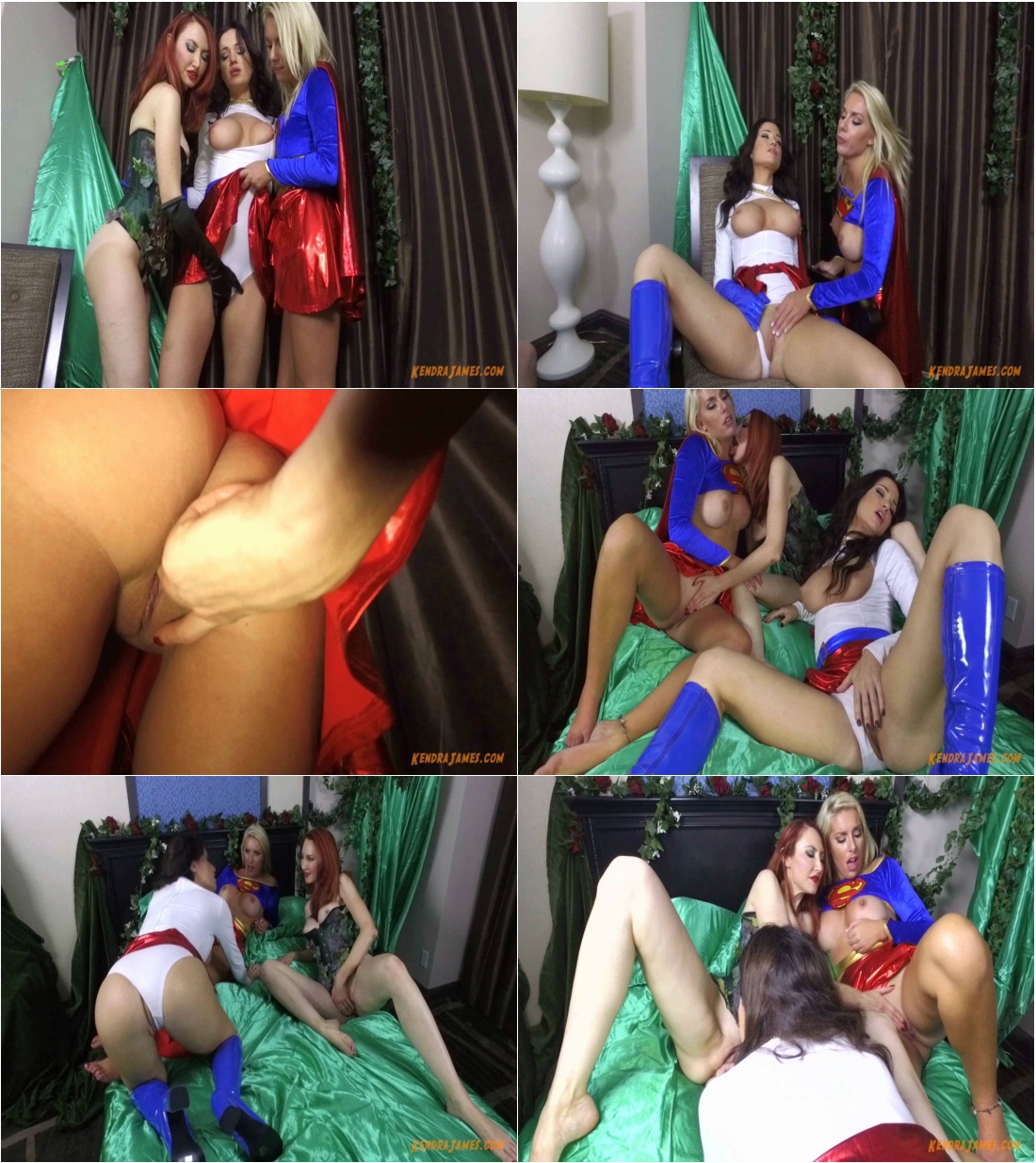 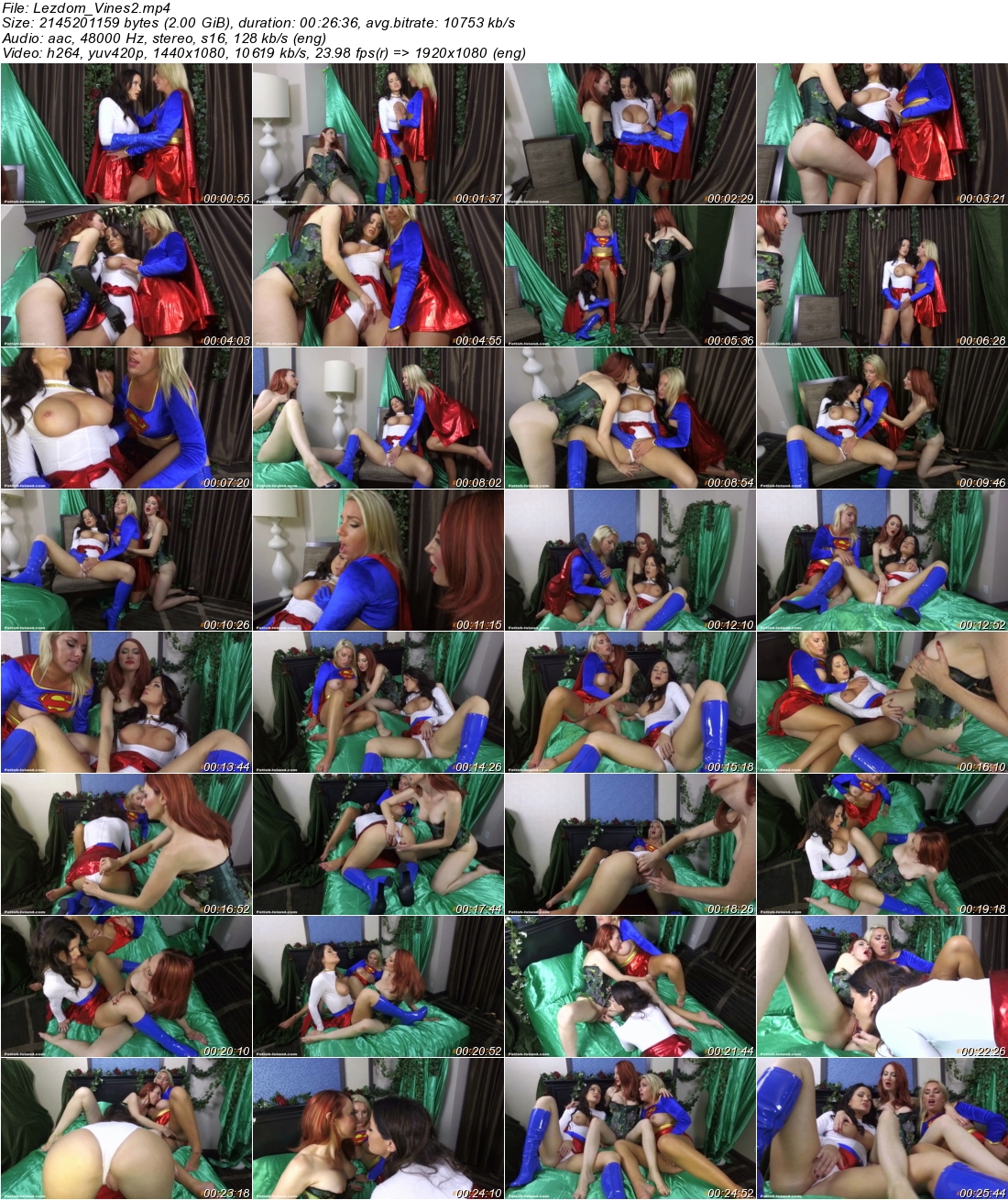 Power Girl has received a distress call from her league partner Super Girl. She rushes to the location to find her super friend barely awake, eyes fluttering and bound in vines. Poison Ivy is slumped over in a chair beside her and appears to be oblivious of the situation. What could have possibly happened? Super Girl raises her head weakly and asks her friend to untie her. Power Girl rushes over to untangle her from the vicious vines, but as she does the girl of steel begins rubbing her knee in Power Girl’s crotch. The pheromones Ivy used have coursed through her veins and are leaking through her skin making anyone who comes into contact with her mesmerized in arousal. Power Girl is confused and tells her to stop, but is getting turned on and can’t help grinding her crotch on Super Girl’s knee.
Poison Ivy opens her eyes and smiles knowing her little plan worked, she now has both superheroines mesmerized and under her control. She grabs Power Girl from behind, kissing her neck and blowing pheromone dust into her mouth as Super Girl continues rubbing her pussy. The nearly hippnotized heroine begs them to stop in between moans, but Ivy silences her by sticking her fingers under Power Girl’s skirt and in her wet pussy. She gasps in excitement, unable to control her orgasm.
The devious weed instructs them to kiss and fondle each other, taking pleasure in humiliating the powerless heroines. Super Girl finger fucks Power Girl while Ivy sucks on her tits, tasting her pretty pik nipples. The heroines can’t fight the urge to makeout, twining their tongues together. The girl of steel masturbates excitedly, fingering her own pussy while Power Girl sticks her head between Ivy’s legs and licks her pussy. The villain’s juices flow into her mouth mesmerizing her even more and causing her to be uncontrollably aroused. She just has to fuck Ivy pussy to pussy, grinding her dripping cunt into Ivy’s slippery slit. Power Girl screams in orgasm and the two humiliated heroes slump into oblivion.
includes, but not limited to: superheroines, super villain, costumes, cosplay, spandex, costumes stay on, up skirt, mesmerize, lesbian, girl girl, finger fucking, oral sex, pussy licking, kissing, make out, humiliation, Angela Sommers, Cherry Morgan, Lesbian domination
Category: SUPERHEROINES
Related Categories: SUPER VILLAIN, MESMERIZE, LESBIAN DOMINATION, PUSSY EATING, GIRL-GIRL
Keywords: kendra james, cosplay, pussy licking, angela sommers, finger fucking, lesbian sex, cherry morgan, pussy fondling, kissing, superheroines, mesmerize, masturbation, spandex, mind control, peril
tags:superheroine,superheroines,lesbian domination,lezdom,story line ,storyline,froced orgasm,submission,humiliation,super hero, super heroines ,superheroines porn,superheroines adult movies,catfight,cat fight,,female fighting,ring wrestling,female wrestling,Scissors,catfighting,cat fighting ,supergirl,poison ivy