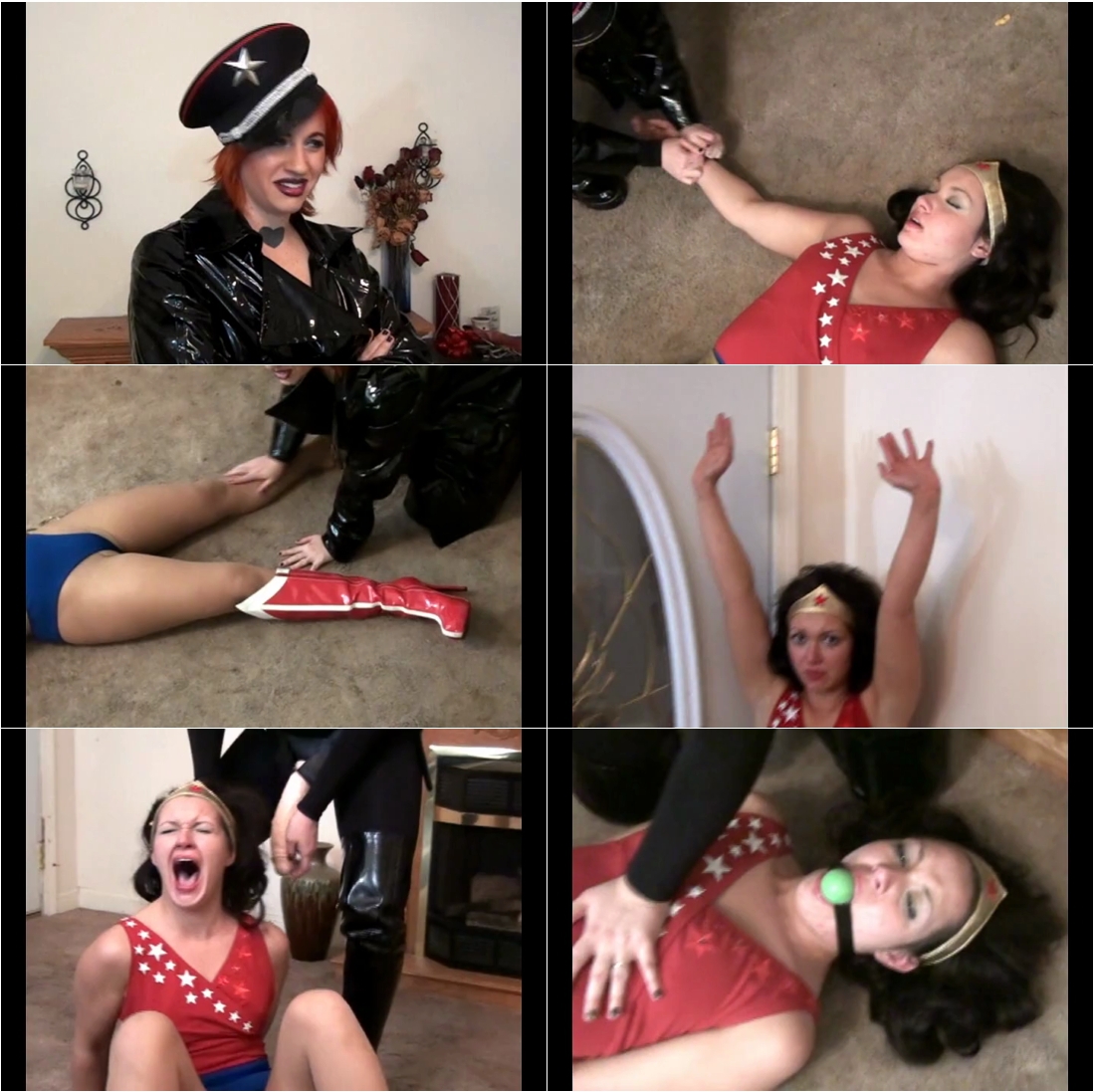 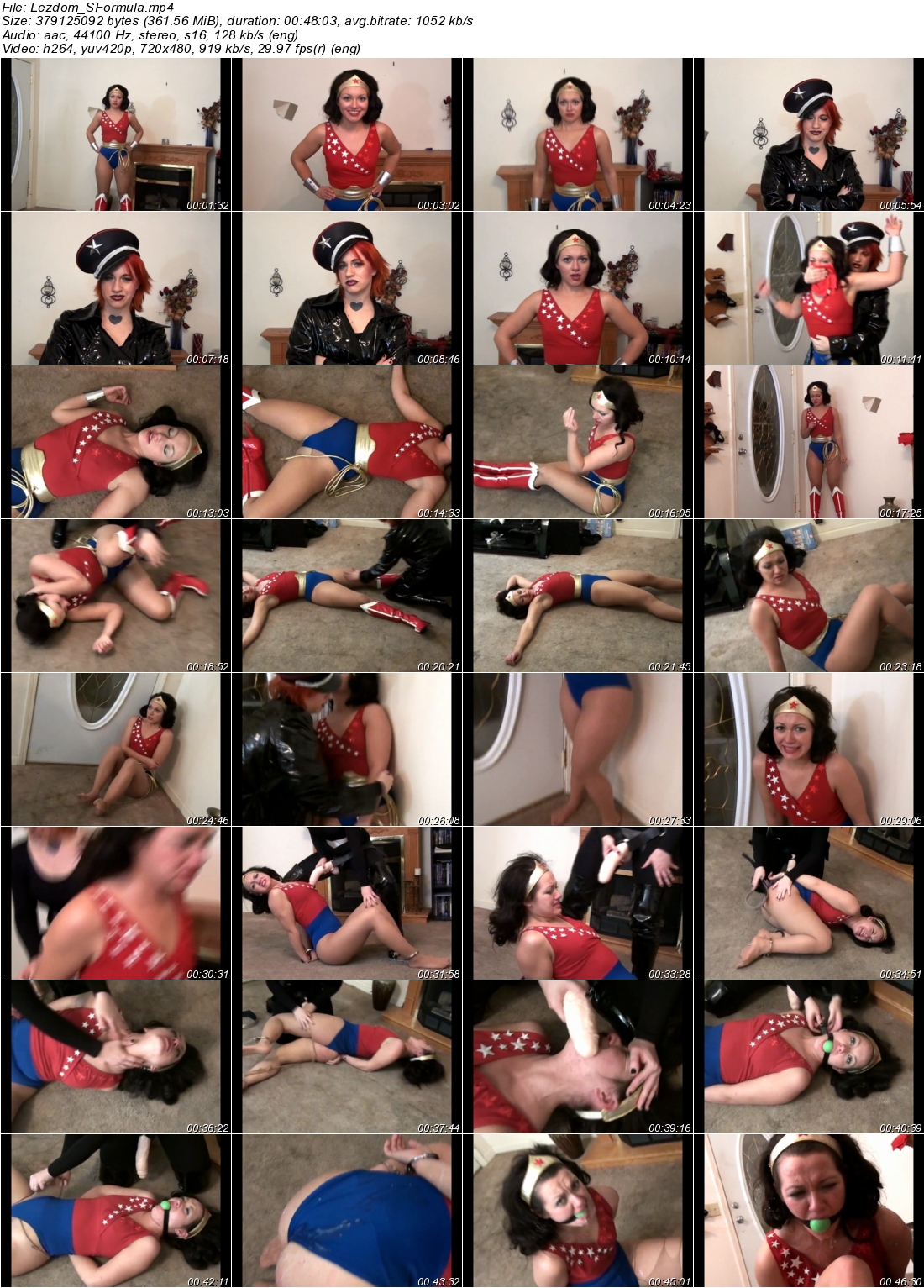 Bondage Humiliation, Superheroines
Starring Bambi Buttons as Drusilla/Wonderous Girl and starring Jessica Nova as Paula Vongunther
Our Story opens with the young and naive Drusilla meeting with a kindly scientist, who claims to have perfected a chemical process called Galvinization which uses chemically produced electricity that strengthens steel 10 times over. He is attempting to sell the process to the highest bidder, but is favoring the allies instead of the axis powers. Drusilla has been sent to meet with the scientist to convince him to sell the formula to the US. Unfortunately, Drusilla makes the mistake of showing her indestructible bracelets to the doctor, proving to him that he has NOT created the world’s hardest metal. Feminum, harder than any substance known on earth, will not put the doctor in any scientific research journals.
The Doctor, driven crazy by the realization that his new scientific formula no longer results in the creation of the hardest metal known, is obsessed with eliminating Drusilla and hiding the secret of her feminum bracelets from the world.
Making a deal with the axis powers in order to make some money and defeat Wonderous Girl once and for all, he makes a deal with Paula Vongunther to have her beaten, sexually abused, physically violated and utterly shamed. Wonderous girl blindly blunders into this trap, at first losing her power items, and then her dignity, and then her sexual virginity, in a way that will shock and stun everyone who watches this clip. After Paula has her way with the weak and pathetic Wonderous Girl, the kindly old man sexually torments her in the worst possible way. Resulting in her being covered head to toe by the creamy load in ancient loins. It goes in her hair, on her face, and all over her beautiful spandex costume. The ending for this video is so vulgar and crassly exploited that you have to see it to believe it.
This clip contains the following fetishes: catfighting,simulated sex, breast fondling, crying, submissive sluts, weak, interrogation, desperation, humiliation fetish, femdom, debooting, debelting, handcuffs, handcuff restraint, bondage, simulated ejaculation, bracelets, spanking, cosplay, costumes, tights, suntan tights, brunette, small breasts, strong, muscle, bicep, massage, thighs, legs, big butts. ballgag, rope bondage, rope, strap on. This is one hot video featuring Bambi Buttons as you have never seen her before.
This clip is specially priced until the end of April in the spirit of tax season so spend your refund here, it goes up to full price May 1st!
Big Toys, Crying, Ejaculating Toy, Face Fucking, Femdom, Interrogation, Strap-On, Super Villain, Tights Fetish, toy sucking,
tags:superheroine,superheroines,lesbian domination,lezdom,story line ,storyline,froced orgasm,submission,humiliation,super hero, super heroines ,superheroines porn,superheroine porn , superheroines adult movies,catfight,cat fight,,female fighting,ring wrestling,female wrestling,Scissors,catfighting,cat fighting