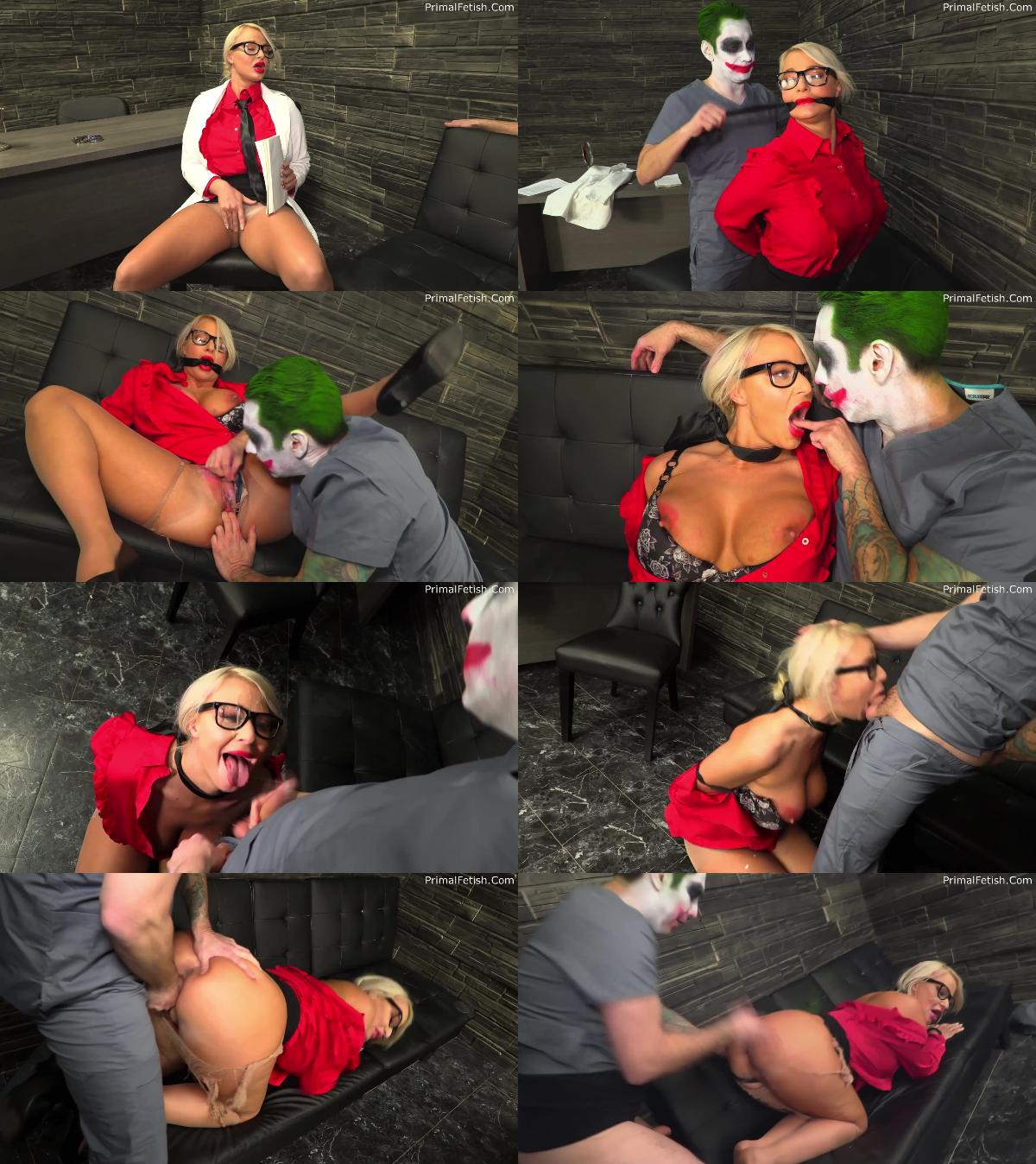 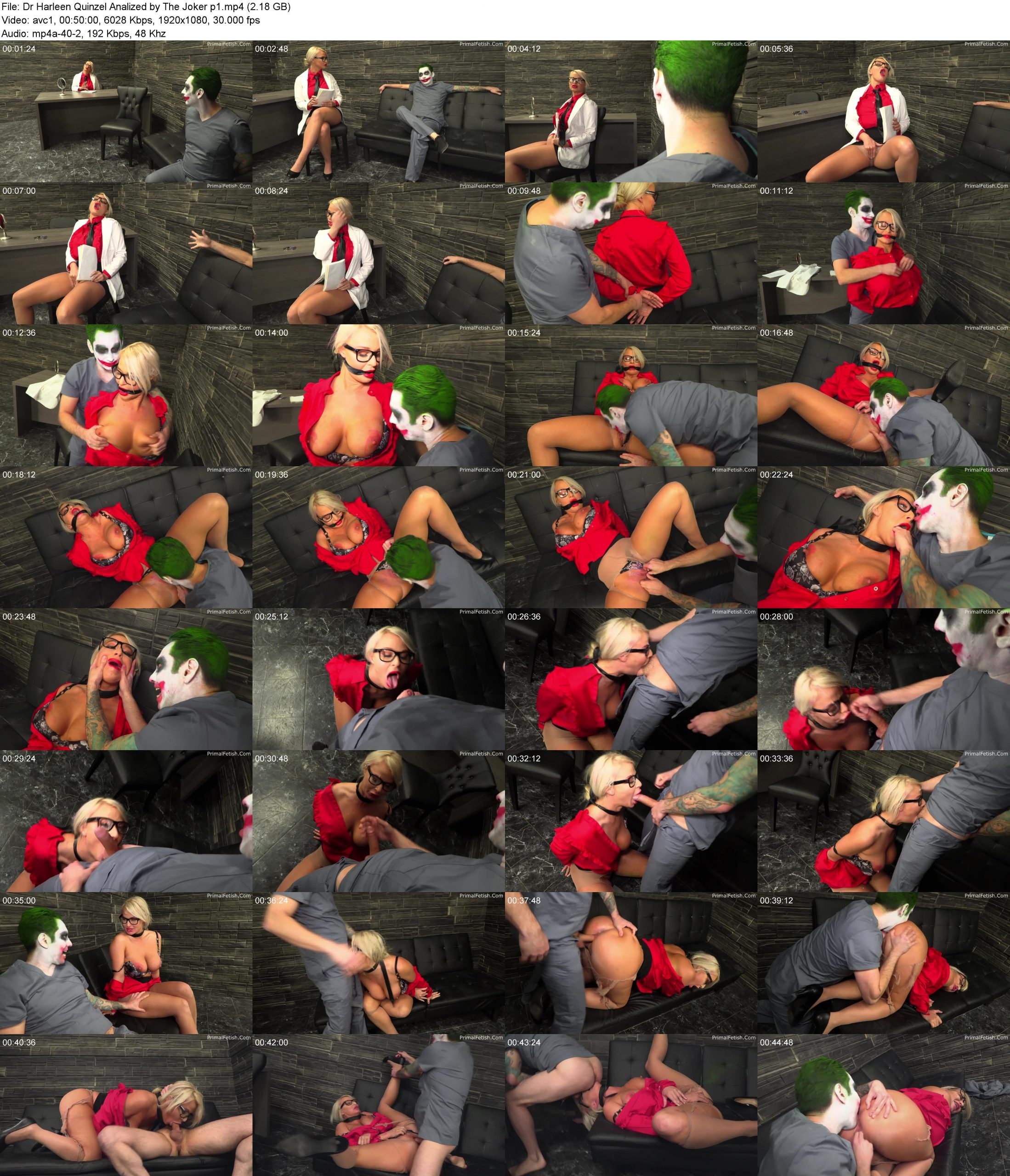 Standard padded cell or office setting in a darker environment / silhouette. Single chair and couch for a therapy session.

Dr. Harleen Frances Quinzel is already sitting at her chair, prim and proper, adjusting her round glasses, awaiting the session. She is writing away.

"April 3rd, session 19: Oh boy this is starting to get more serious than I thought. The more I learn about this poor man’s past abuses, the more I empathize with him. I know these kinds of thoughts are unprofessional, but the more I talk with Joker, the more I feel that I can connect with him. And if I can truly form a bond with the man behind the makeup, maybe I can truly help him to find some sort of real treatment."

We hear door open as the Joker emerges, laughing in cuffs behind his back

GUARD: Here he is Doctor Quinzel!

Harleen Quinzel: "Thank you Frank. You can close the door behind you honey!"

Harleen Quinzel: "We’ve been through this Frankie: these are my sessions and Ill handle them my way. Thank you."

Harleen Quinzel: She looks at him sharply "Alright but you have to agree to stay on your chair this time. No clowning about!"

Joker: He gives a smile "Alright you have my word."

She comes over and removes the restraints from behind his back; all the while the Joker is clearly checking out her ass and is grinning ever so sinisterly. She returns to her chair

Harleen Quinzel: "So … Joker. When last we spoke, you were telling me about your step-mother …"

Joker: He blurts out his tongue. "Oh that is so last week Doc! And will you please just call me Mr. J! It just rolls off the tongue!"

Harleen Quinzel: "We’ve discussed this Joker. I’m your Doctor. I want to help you. Now please: go on with your story."

Joker: Frustrated. "Oh why do want to know about her? Did I ever tell you about my time with the Jester?"

Joker: "Oh you know, the Jester. She was … well she was someone special."

Joker: "Oh I think you know! She was special lady … for a while anyway."

Joker: "Well she just wasn’t into the kind of sex I was into my dear. She just wasn’t up to the challenge." Joker begins to giggle

Harleen Quinzel: "And what kind of sex was that?"

A close up of his smile

Joker: "Only the rough stuff my dear Doctor Quinzel!"

Harleen Quinzel: "So you were involved in an intense physical relationship with the Jester?"

Joker: "Baby, you don’t know the half of it!" We were into the freaky stuff and let me tell you! She let me do it all."

Joker: I just think she liked to be punished! Sometimes I tie her up and she’d let me spank her ass and she would moan with ecstasy! ‘More she’d cry!’ I can take it! And that ass could was pink as the sweetest pussy!"

Harleen Quinzel is rubbing her clit

Harleen Quinzel: "What else did you do to her? It’s important I know all the details"

Joker: "I used to stick my dick in all the places the sun don’t shine Doc! Deep in her Pussy! I would make her purr and scream all out all at once. And don’t get started on her love for butt sex! I’d penetrate that butthole over and over again! Heads down: Asses Up! That’s the way the Joker loves to fuck! And boy … was she a squealer!" Joker squeals like a pig before laughing

Harleen Quinzel: Nodding and sighing. "Anything else you can tell me?"

Joker: "But damn if I didn’t love the ass to mouth stuff my dear. I mean that girl would not stop letting me face fucking her. I swear her mouth was attached to my dick 24 hours a day. And I would fuck her brains out. She’d drool and gag on it for hours and by the stage, I’d forgotten who was there. I’d literally leave her breathless! And the best part was she wouldn’t talk! And that was fine by me let me tell you!

Harleen Quinzel is clearly is trying to straighten herself up. But Joker has clearly been watching as he grins at her

Harleen Quinzel: "And so why do you think she liked rough sex so much?"

Joker: "Well it was all role-play my dear! You know nothing gives me more of a stiff hard cock! Works better than Viagra I tell you!" Laughs

Harleen Quinzel: "I suppose for the sake of … psychological research, you could demonstrate for me?"

Joker is intrigued as he grins. Harleen stands up and walks to the handcuffs

Harleen Quinzel: She hands him the cuffs. "You can start by showing me how you role played with the Jester?"

The Joker does look slightly hesitant at first, but stands up and pats the couch.

Joker: "Right this way my dear."

Joker sits her down takes her lab coat and throws it to the floor. She willing put her hands behind her back as he fastens the cuffs. Bondage 5 mins

Harleen Quinzel: "So you would hand cuff the Jester. Seem pretty tame to me."

Joker: "Are you sure you’d like to know more?"

Harleen Quinzel: "I insist on learning more about your psychology Mr. J."

Joker: "Mr. J … oh I like that." He begins up untying her tie. "But I’m afraid the time for chit chat is over Miss. Quinzel. You see, I wasn’t big on words with the Jester." As soon as her tie is off from her neck, he put it around her mouth and/or gags her.

Joker: "Oh look at this." He begins to unbutton her blouse, revealing her bra." What a lovely pair of tits you have my dear."

Harleen Quinzel nods as Joker reveals her tits and begins to fondle them. The Joker eventually begins licking her tits as Harleen starts to moan and drool.

Joker: "Yeah Jester liked that to Miss Quinzel. But not as much when I would do this."

Joker pushes Harleen Quinzel down as he pulls up her skirt to reveal her panties.

Joker: "Whoa! These are soaked Miss Quinzel! But it’s about to get a lot more messy down here!"

Joker doesn’t remove them. Instead he pulls them to the side as he puts his mouth between her legs. Harleen is crossing her eyes, moaning and groaning as she drools down her bare chest and taken into ecstasy. Her mascara should have started to run.

Joker finishes up and removes the tie from her mouth.

Joker: "So what do you think Doc?"

Harleen Quinzel: Stammering. "Please, call me Harley. Everyone does."

Joker: Laughing. "But of course Harley."

Harleen Quinzel: Still stammering. "But I think you’re still holding back something from me Mr. J. I want to help you."

Joker pauses before grinning and stick his hand in her mouth.

Joker: "Let’s put a smile on that face then."

Joker: "I would stick my dick in her mouth and stick it hard down her throat. Oh boy did she love that!"

Joker should be gagging her with his hand and wiping the spit on her face. Eventually the Joker whips out his dick. He starts but simply waving it in her face, moving it around her face, taunting her with it

Harleen Quinzel: "Please Mr. J. I insist we move on with the session."

Joker: "Coming right up Doc. I hope you’re ready for some slapstick featuring my dick!"

He spits on her face. Harleen doesn’t mind. She outstretches her tongue and he taps it on there a few times before thrusting it down her throat. Blow job / Facefucking / Deep throat / 10 minutes.

She should be gagged and deep throated a few times. This can be done however you see fit but her glasses should eventually fall to the ground, revealing her ruined makeup: her face covered in spit and drool. Also her hair should start to look quite dishevelled but not out of its bun yet. Her voice should also start to become more Harley Quinn like. The Actors can improvise dialogue exchanges down below:

Joker: "I want to see you fucking drool!"

Joker: "Let me use your mouth Harley!"

Joker: "I think you might want to consider a change of career!" Laughs

Harleen Quinzel: "The Patient is clearly delusional – and I love it!"

Harleen Quinzel: "C’mon Mr. J! I need to you examine my throat!"

Harleen Quinzel: "Boring! Give me your worst! I can take it"

Eventually Joker stops and Harley Quinn is starting to emerge as Harleen begins to laugh manically. He takes off her cuffs and sits down beside her.

Harleen Quinzel: Shaking a little. "Mr. J. I insist you show me everything. You spoke of rough sex. I need you to examine me … I mean I need to examine you."

Joker: "Of course, this isn’t the end of the line Harley. We’re only just getting started."

By the end, he should be hair pulling at her but using her hair into two pony tails like her Harley Quinn look. She should also be full on talking like Harley Quinn.

The Actors can improvise dialogue exchanges down below. I hate long silences in scenes with nothing but moaning.

Joker: Smearing her face. "Look at you, you’re so pretty now!"

Joker: "I grow bored with this! This girl needs an Enema!"

Joker: Squatting over her face. "Tell me Harley, have you ever danced with the devil in the pale moonlight?"

Joker: "I’d say ladies first but we don’t have any here!" Laughs

Joker: "Squeal for me Harley!"

Joker: "Let me use that cunt!"

Joker: "What should we do later? Circus maybe?"

Joker: "I love it when I get to play Doctor!"

Joker: "How does it feel to be bad Harley?"

Harleen Quinzel: "I love the taste of my ass/pussy juice Joker!"

Harleen Quinzel: "Gag me Mr. J! Use me like a whore"

Harleen Quinzel: "Your therapist is going to love hearing about this!"

Harleen Quinzel: "I need you to treat me Mr. J. Treat me like a whore!"

Harleen Quinzel: "I was hoping you’d do that!"

Harleen Quinzel: "Good thing the Doctor was on call."

Harleen Quinzel: "This is all very therapeutic! Trust me: I’m a Doctor!"

Harleen Quinzel: "I love the taste of my ass/pussy juice Joker!"

Harleen Quinzel: "Give me some of your pudding … pudding!"

Joker: "Way till you get a load of me!" Laughing manically

Joker: "How do you feel … Harley Quinn?"

Harleen Quinzel then crawls back onto the couch and crosses her arms across her bare chest. She’s put her hair in two side pony tails. Joker has gotten into her seat and taken out her pen and paper.

Joker: "So tell me Miss Quinn? When did you first realise you were addicted to big dick?"