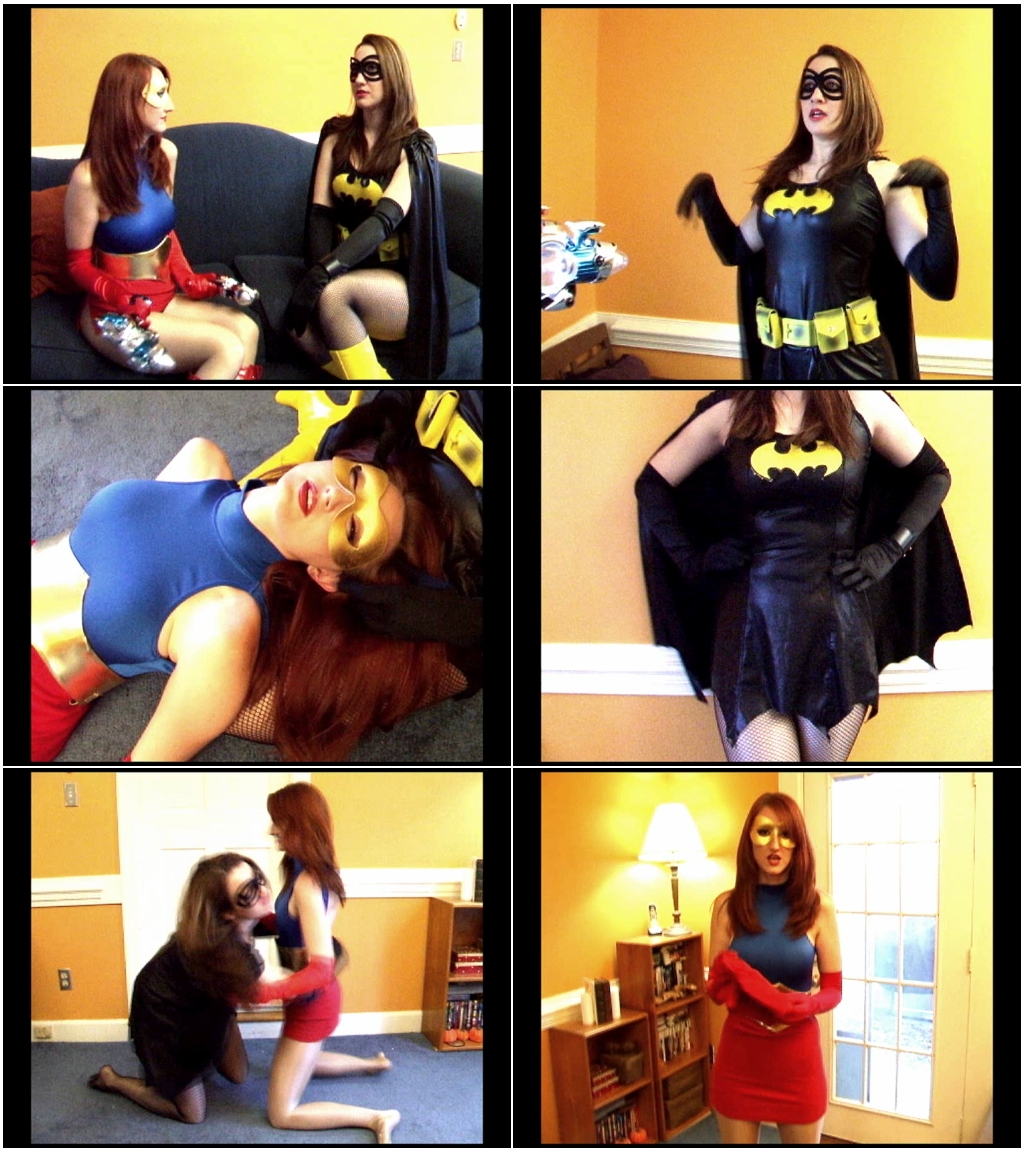 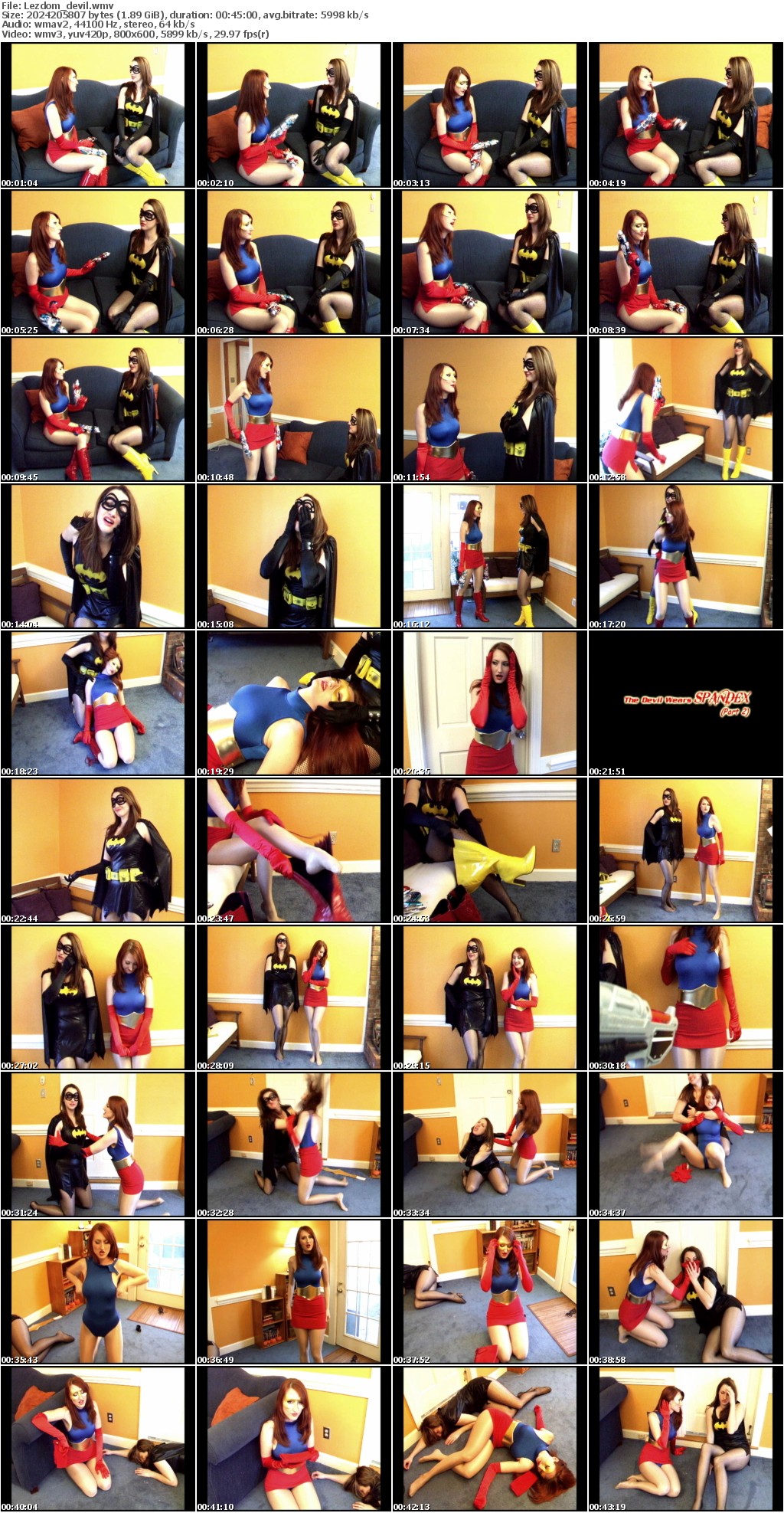 There’s a new superheroine in town, the stylish and powerful Vectress who uses her 22nd Century technology and gadgets to wage a war against criminals everywhere! While the people of Tiedsville love her rocket powered jet-boots, super-strength, and twin futuristic plasma-ray , they are even MORE impressed with her friendly demeanor, busty physique, and her natural charisma which wins the hearts and minds of the disenfranchised. All of this culminates in her thirty-day ‘performance evaluation’ by a senior member of the League of Amazing Women, which happens to be conducted by Femmbat Delta. Unfortunately, Femmbat Delta harbors a secret dislike of Vectress for breaking her L.A.W. record for superhuman arrests in a single month, and decides to break Vectress’ will by giving her a decidedly vindictive performance evaluation which has Vectress suspecting a more ‘personal’ vendetta is at work here instead of the usual evaluations. Confronting Femmbat Delta about the unusually ‘harsh’ review she received, Vectress demands to be treated fairly but it is clear that Femmbat Delta harbors a chip on her shoulder which will forever impede the futuristic superheroine from attaining permanent membership in the League of Amazing Women. In that case, Vectress issues a challenge to the sneering Femmbat Delta… Best of three fights between the two of them right at this very moment. If Vectress wins, Femmbat Delta has to turn over her whole ‘performance evaluation’ file to a different senior member of the league so that Vectress can be judged fairly by a non-biased member. If Vectress loses the fight, she promises to withdraw her application to join the league and will remain a solo superheroine fighting evil in Tiedsville without being a league member so that Femmbat Delta’s previous ‘arrest record’ remains intact and unchallenged. Who will win, and who will lose? Will the busty newcomer dethrone the crafty (but powerless) femmbat, or does the tricky urban crimefighter have a way to defeat this red-hot rookie with an unbeatable record for thwarting crime?

After agreeing to fight it out between the two of them, Vectress (played by fetish hottie Kendra James) and Femmbat Delta (played by curvy superstar Angelique Kithos) each pull off their boots and deactivate all of the weapons in their respective arsenals. A short time later, their gear piled in a corner, the two heroines have at it. Although Vectress still has the benefit of her natural super-strength, Femmbat Delta’s martial arts skills and natural agility more than even out the battle. As the two of them trade belly punches and shots to the face, it is still undecided who is the victor. Just as the battle reaches a crescendo, both heroines are shocked and horrified to see the Collector enter the room, his electro-stimulator in hand. A desperate rush for their power items fails as the Collector catches them before they can get up off the floor, leaving both heroines temporarily at the mercy of this sinister supervillain, powerless to stop him. The Collector (who collects superheroine paraphenalia of all types) wishes to add newbie superhero Vectress to his list of conquests by encasing her in an 8mm poly-wrap bag and putting her in his basement as a prized memento, and has come to her home to capture her. His delight at finding Femmbat Delta only increases his avarice at adding more captured superheroines to the Collector’s comic-book shop/pickling room deep in his mom’s dingy basement.

Forcing both heroines to fight, at first the two crimefighters obviously fake the wrestling, which only infuriates the Collector, so he gives them both a shot in their “sweet spot” with his electro-stimulator, causing them to writhe briefly in orgasmic abandon, making both heroines ashamed and feeling dirty about their own sexual desire being turned against themselves. Later, both heroines fight for real, with the victor eventually pulling down the top of the loser (exposing her breasts against her will) and then placing a strange-smelling rag soaked in ether over the nose and mouth of the loser, putting her asleep. Then, in a moment of bizarre irony, the victor is ordered (at ) to apply the same rag to her own face, quickly knocking her out as well as the potent fumes render her insensate. When both heroines recover an hour later, it seems as though the Collector was scared off through some unknown fashion, but since their power items are all still intact, why didn’t he take anything from them this time?

This clip is for lovers of catfighting, face punches, belly punches, topless nudity, multiple debeltings, multiple debootings, shiny and matte pantyhose/tights, heroines getting the ‘magic cloth’ treatment from fellow crimefighters, orgasm-ray helplessness(brief), unmaskings, costume pieces (such as skirts and gloves) being ripped off by force and tossed aside, and long scenes of superheroines laying on the ground moaning helplessly and laying vulnerable. This clip is also for lovers of fistfights, bitchy talk between two superheroines, tear gas exposure which leaves a virtuous superheroine screeching in pain and agony and clawing at her eyes, heroines getting defeated by stun-beams and being knocked to the floor, sexy superheroines being defeated by a powerful neck-pinch which leaves them helpless and paralyzed on the ground, and an amazing unmasking scene with secret identity fetish where Vectress loses her golden mask and has her true identity exposed which leads to many looks of horrified shock and shame as she tries to hide her private persona from Femmbat Delta who is definitely gloating about her discovery.
Category: SUPERHEROINES
Related Categories: CAT FIGHTING, PANTYHOSE/STOCKINGS, MASK FETISH, COSPLAY, FORCED STRIPPING Keywords: belt fetish, boot fetish, forced stripping, fausta, unmasking, powerless, peril, humiliation, redheads, catfighting, shame, secret identity
tags:superheroine,superheroines,lesbian domination,lezdom,stroyline,froced orgasm,submission,humiliation,super hero, super heroines