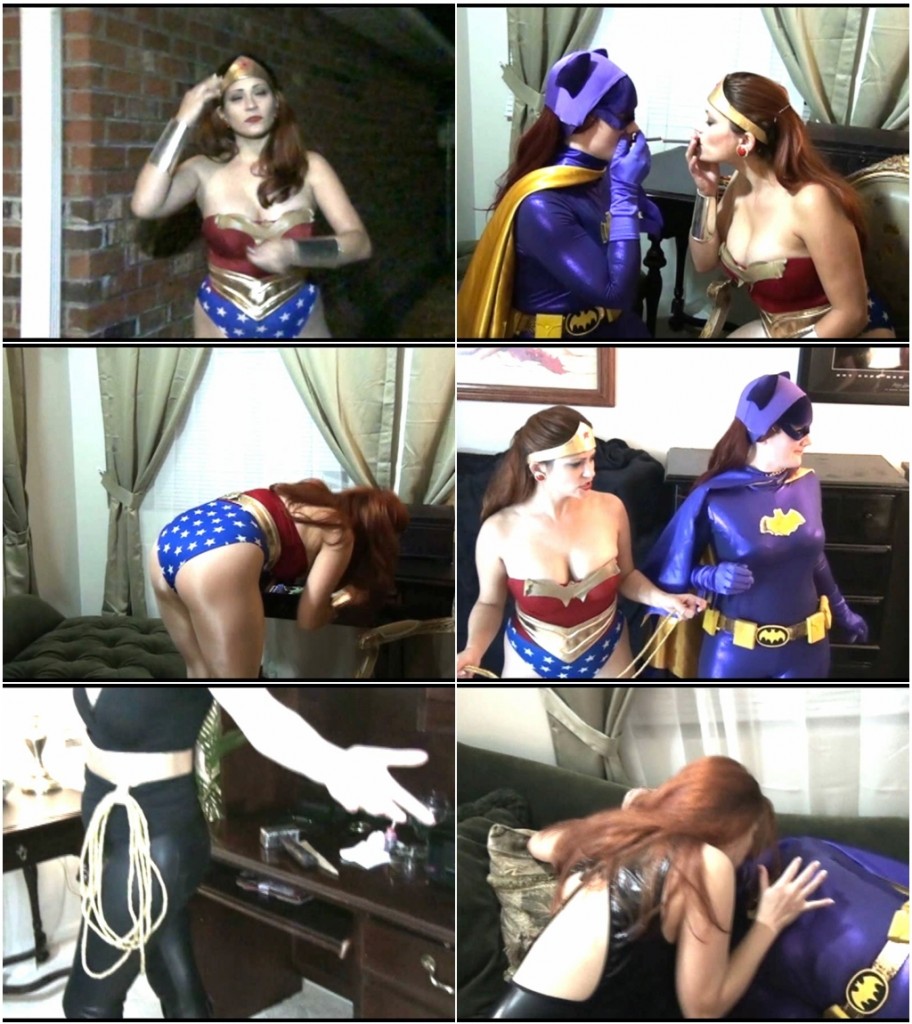 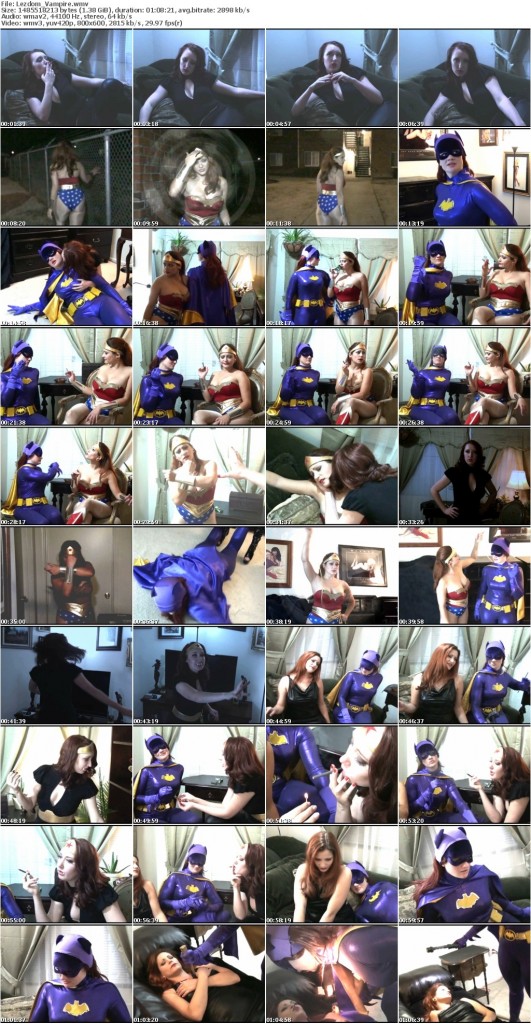 A night meeting between Baron Vladimir VonLudwig and one of his vampire lieutenants (Claire V.) shows that the vampire army is about ready to invade Washington D.C. as soon as the timing is right. Unfortunately, the conquest of New York (just a few hundred miles away) can’t happen because the mighty Wonder Vivian stands ready to stop Ludwig should he act, and so the Baron conspires to use one of his beautiful lieutenants to eliminate Wonder Vivian and turn the amazon princess using the ‘dark trick’ to convert her from the living into one of the unliving. By suggesting that converting Vivian (who is already immortal) into one of the greatest vampire thralls the world has ever known convinces the sultry redheaded nosferatu that this would be to her benefit.

A few days later, some grisly newspaper headlines bring both Wonder Vivian and DarkKnight Damsel to Washington D.C. and a night-time patrol brings the two superheroines together. After briefly conferring, the two split up to cover more ground DarkKnight Damsel uses her ‘ichor tracker’ to trace the paths of the nosferatu into a small home not too far away. After entering through a window, DarkKnight Damsel is soon attacked by Claire, and before the purple-catsuited beauty can respond she is savagely bitten! As the famished vampiress hungrily gulps down as much hemoglobin as she can, the weakened crimefighter reaches into her famed utility belt and produces a blessed stake made from ash wood. Reversing it in her grip, Babs drives it backwards with as much strength as she can muster and she manages to pierce the vampire’s heart! Unfortunately, it is not a direct hit with the stake and so although the vampire is wounded by the attack, she is not eliminated. As DarkKnight Damsel crawls away, dazed and wounded, the vampiress marshals all of her remaining energy and manages to remove the stake from her chest before it can do any more damage. Knowing that staying would only hasten her demise, DarkKnight Damsel weakly crawls to safety as the wounded vampiress licks her wounds and runs off in the opposite direction!

The next night, after getting bandaged up and getting a transfusion, DarkKnight Damsel and Wonder Vivian return to the same house at midnight hoping for a rematch but finding the house empty. Assuming that the vampiress will return shortly before sunrise to return to her coffin, the two superheroines stake out the home and see a pack of cigarettes nearby. Settling down for a stakeout (no pun intended) the two superheroines strike a few matches and light up with some cigarettes. Smoking and passing the time, they talk about various matters as relating to sexy superheroines. Eventually though the sun starts to rise and they realize that the evening has been completely wasted on a stakeout that didn’t pan out. As DarkKnight Damsel returns to the Batcycle (parked outside) to radio in to the Dark Knight, Wonder Vivian receives a surprise visit from the vampiress, who has only minutes to return to her coffin before the sun rises. Holding her silver bracelets (blessed by Zeus) into a ‘cross’ position to ward off the vampire, it works at first but the redheaded vampire uses her powerful charm-and-gaze to stare into Wonder Vivian’s eyes, weakening her will and making her lower her arms, removing her protection. Jumping atop the buxom superhero, the vampire bites into the immortal amazon’s neck for the first time, drinking the precious red hemoglobin that all living creatures need to survive. As Wonder Vivian collapses backwards onto the couch, pale and weak, the vampiress goes in to drain the superhero dry but the ringing of church bells indicates that it is now 6am, and that there is no time left to finish off the beautiful crimefighter laying prone and helpless on the couch. As the vampire flees to one of her alternate coffins, DarkKnight Damsel returns and sees her friend laying at the border between living and unliving. Rushing to Vivian’s aid, DarkKnight Damsel activates the emergency beacon on her utility belt, summoning paramedics to the scene! Great Gotham, what will happen to the beautiful Wonder Vivian now that she’s been drained so low? Is there any hope left for her… or for the people of Washington D.C.? Tune in, and find out!

This clip is primarily about both vampirism and cigarette smoking, and there is plenty of both in this part. There is also biting, hemoglobin drinking, breast groping, struggling, pantyhose and/or tights fetish, corsets, sneak attacks, charming gaze attacks and mind control fetish, attacks from behind, tight spandex pants, chain belts, catsuit fetish, cosplay fetish, yoga pants fetish, wooden stakes through the heart, and crawling around on hands and knees. There is also the classic vampire ‘two puncture wounds on the side of the neck’ fetish for those who are true fans of the genre.

It is now 24 hours since the vampire attack that drained Wonder Vivian of most of her hemoglobin. Although she was quick to recover, the amazon princess now seems strangely distant and apathetic about almost everything that has happened since her attack… and as a small side-effect, Wonder Vivian stays indoors during daylight hours, a fact which is not lost on the keen analytical mind of DarkKnight Damsel. On one of the following nights, Wonder Vivian sees one of Camilla’s vampire minions, but as she brings her silver bracelets together to make the sign of the cross (as she did so often in part 1), the resulting backlash of Greek mystical ‘holy’ energy burns Wonder Vivian’s wrists badly, indicating that she’s now been ‘tainted’ by the vampire’s kiss, and is now (at least partially) unclean. Unable to wear her magical silver bracelets anymore, Wonder Vivian cries as she peels off the burning bracelets and toss them both aside, unable to wear them a moment longer.

DarkKnight Damsel has encountered Camilla herself, and is bitten by the savage nosferatu, but Camilla quickly spits out the first tiny sip of DarkKnight Damsel’s hemoglobin, as it tastes like ashes and makes the vampire dizzy and sick. The courageous crimefighter says that she used a few drops of Camilla’s vampire saliva to make a Bat-vaccine treatment against the disease of vampirism, making her “undigestable” by vampire standards and repulsive to taste. Camilla decides to pull off her long gold-chain belt and use it as a garrotte and then throttles the purple-catsuited crimefighter from behind, intending on squeezing her throat until Barbara’s air supply runs out. The gasping crimefighter is about to lose the battle when Wonder Vivian appears (bracelet-free) and twirls her magic lasso to catch Camilla. A deft twirling of the hand (and a powerful mezmerizing gaze) later, and Wonder Vivian’s aim is off that she accidentally misses her target, allowing Camilla to make a swift escape.

Later, after meeting with Vladimir Ludwig, the Prince of Vampires in New York City, Camilla discovers that she feels ‘strange’ about the loss of her gold chain belt and (on an impulse) feels a need to ‘spin’ for no good reason. Acting on impulse, she spins and inadvertently has acquired enough of Wonder Vivian’s life energy that she now transforms (partially) into Wonder Vivian’s costume, complete with power belt and tiara! Camilla, now possessing half of Vivian’s amazonian superpowers, changes her tactics and uses special chemically-laced cigarettes to both subdue and entice both superheroines a few nights later. DarkKnight Damsel came prepared though and had special nose-filters to screen out any chemical impurities. Her plan backfires though when Wonder Vivian (now in a satin black evening gown and heels, looking eternally dark and radiant) is ordered by Camilla to punch DarkKnight Damsel in the stomach and then hold her hand firmly over the purple avenger’s mouth, forcing her to breathe out in a huff, easily popping out both nose filters from her nostrils in the process. Now bombarded with the mind-altering smoke from the cigarettes, DarkKnight Damsel succumbs to the heavenly vapors and drifts off into a realm of mind-altered nirvana. As her last reflexive action, she reaches into her utility belt and fumbles out a small vial of holy water heavily infused with garlic. Camilla laughs at the sexy superheroine, telling her that a single vial of holy water will be useless against a vampire. but DarkKnight Damsel instead sprays herself with the holy water infusion, coating herself in an eye-watering garlic and holy water ‘force-field’ that will keep either vampire from approaching her until it naturally wears off in eight hours. Camilla, enraged, attacks Wonder Vivian a second time and again drains the life-giving hemoglobin from her veins, and now Wonder Vivian sports a set of long white fangs from her mouth. The transformation is nearly complete! Can DarkKnight Damsel find a way to save the day, or will Vivian become a member of Camilla’s undead army of evil?

This clip is primarily about both vampirism and cigarette smoking, and there is plenty of both in this video. There is also biting, hemoglobin drinking, breast groping, struggling, pantyhose and/or tights fetish, corsets, sneak attacks, charming gaze attacks and mind control fetish, attacks from behind, tight spandex pants, chain belts, catsuit fetish, cosplay fetish, yoga pants fetish, wooden stakes through the heart, and crawling around on hands and knees. There is also the classic vampire ‘two puncture wounds on the side of the neck’ fetish for those who are true fans of the genre. This clip is for lovers of vampire lore as well as several well-known vampire tropes, weaknesses, and destruction methods. This clip also has hemoglobin drinking, bracelet removal, belt removal, magic lasso throwing, hand over mouth fetish, superpower stealing (via vampire’s bite), stomach punching, girls in gothic black dresses, catsuit fetish, pantyhose/tights fetish, and plenty of story.