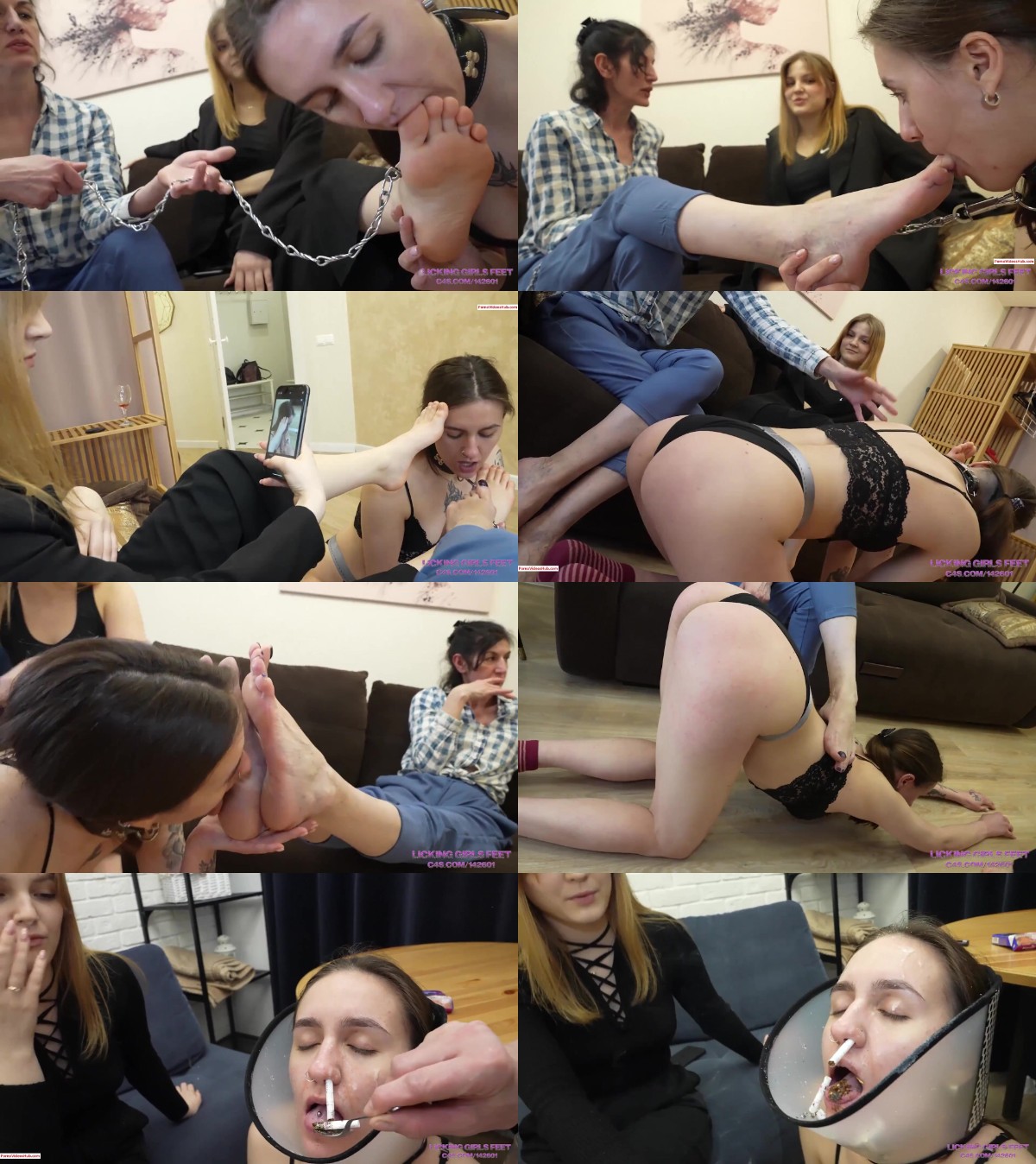 Cindy and chloe have been friends for a long time. They were of the same age and before very good friends. But fate separated them and Cindy entered the university and moved to another city, while chloe entered the local university and stayed in the same city. The girls had not seen each other for more than four years but constantly kept in touch through social networks. Today Cindy arrived in her hometown and visited her old friend chloe. The girls sat and chatted on various topics and Cindy immediately noticed that chloe had changed a lot, she became very withdrawn and unsure of herself. chloe told Cindy about her stepmother Salma… that she mistreated her. chloe would not have dared to invite Cindy if Salma had not told her that she would be away for about a week. But suddenly the doorbell rang. Stepmother Salma returned much earlier than promised. As soon as Salma entered, chloe immediately knelt down and began kissing her stepmother’s hands and feet. Cindy didn’t expect this turn of events at all. "Are you Cindy? chloe’s friend .. I remember you when you were little. As you can see now everything has changed and now chloe is my slave! Now I call her not a stepdaughter, but a slave, a whore, an idiot, etc. Nothing sensible has grown out of her so she’s a stupid slave and does whatever I tell her to do.. cleans the house.. worships my feet.. cleans my shoes, toilet, etc. If you want, she will worship you too?" Salma said. Cindy was a little shocked at first but agreed. "I also noticed that she has changed a lot and now she is no longer my friend, but some other creature. Are you saying that she can be my slave too?" Cindy clarified. Salma ordered her stepdaughter to worship Cindy’s feet. When chloe started licking her ex-friend’s feet, Cindy got embarrassed and said her feet were sweaty and stinky. Salma assured her that everything was fine and chloe was only worthy of their sweaty feet. chloe was very ashamed but she couldn’t argue with her stepmother. She licked and swallowed all the sweat from Cindy and Salma’s feet as they discussed her insignificance. "I don’t want to be friends with that loser anymore! I liked the way she humiliated herself in front of us!" Cindy said. Salma assured Cindy that now she can use chloe whenever she wants. Cindy started taking pictures of chloe licking their feet to show to all their mutual friends. "I’ll tell everyone that now you’re a loser who only deserves to lick the sweat off our feet!" Cindy said as chloe looked at her pitifully with her foot in her mouth. Cindy and Salma sent all the photos to mutual friends and now everyone knows that chloe is a pathetic slave. For Cindy, she is no longer a friend. "When you see that this idiot is not trying, she needs to be punished. Let’s spank her ass! It helps and after that she starts to try harder!" Salma said. Cindy and Salma took the whips and ordered chloe to crawl back to them. The slave started worshiping her ex-friend’s feet while her stepmother slapped her ass. chloe’s ass turned red and she really started to try harder. After which the girls switched places and chloe worshiped her stepmother’s feet and Cindy spanked her already red ass. chloe struggled with her shame and continued to worship her ex-friend and stepmom’s feet as they spanked her ass. Will this lesson have a good effect on chloe and she will start worshiping feet better? Cindy and Salma decided that the spanking lesson did not work on the slave and they wanted to use her as a human ashtray. "This will be another lesson for you! If you continue to lick our feet badly, then you will always eat only cigarette butts and our drool!" Pathetic chloe sat faithfully with her mouth open while Cindy flicked ashes into her mouth and spat in her face and Salma spoon-feeded her cigarette butts like a loving stepmother. Cindy had already finally realized that her ex-friend was a complete loser and she lost pity for her. Cindy spat in chloe’s face again and again .. This began to amuse her. chloe sat with her eyes closed feeling more and more ashamed. After all, once they were very good friends and were on an equal footing .. but now nothing will be the same as before and she will serve her ex-friend and stepmother in the future .. Always!
tags:lezdom fetish,lesbian domination porn,submission ,humiliation,overpowered,facesitting,spanking,spank,pet play,smok,smoking