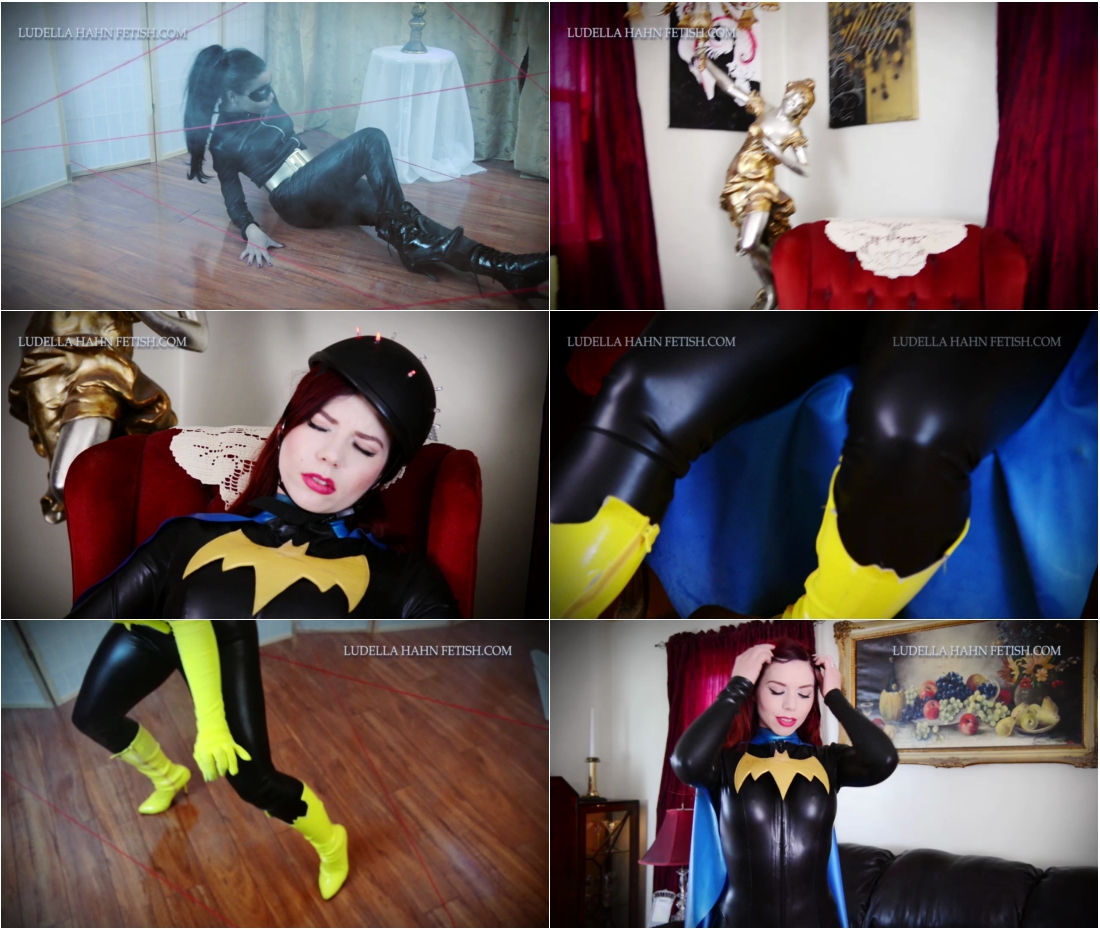 The “Marconi Diamond” has just been put on display at the Gotham City Museum, and when Cat Woman (played by Monica Jade) hears the news, she decides to pounce. She’s had her eye on that diamond for a long time, and now it’s right here in her backyard. In the stealth of night, she breaks into the museum. She smokes up the display room so she can see all the lasers she’ll have to maneuver around to get to her prize. Good thing she’s as agile as a cat. “This will be a cinch.”
She’s so filled with confidence that when she does make it to the other side, she doesn’t even notice right away that the diamond is missing. Someone took it out from right under her nose…and that someone happens to be Batgurl, who got a hot tip that Cat Woman would likely be after it. “Looking for this?”
“Batgurl! Why you! You foiled my plans yet again! Good thing these lasers are between us!” Batgurl sets off the alarms before disappearing into the night to return the diamond safely to the museum director. Cat woman is beyond furious, but she still manages to escape before the authorities arrive. In a temper, she calls on one of her goons to get Batgurl. “Just get her! Get her and bring her to me!” Then an idea creeps into her head and she smiles menacingly. “I know what I’ll do. I’ll brainwash that bat to do my bidding…and make HER get the diamond for me.”
Meanwhile, Batgurl has just returned the diamond and is on the phone with the commissioner reporting back on her mission’s success, but as soon as she hangs up her bat phone, there’s a white rag over her face and the world gets hazy. Her eyes roll back and around until she drops limp to the ground. The goon drags her into Cat Woman’s lair, but she’s not there. She’s left a note for him with instructions. He’s to unmask the wench and put the brainwashing helmet onto her, turning the dial to 12 so that her free will is erased, but she retains all her skills, training, and abilities, which will make her a useful minion for the cat. The goon does as ordered after playing with her limbs to make sure she’s still out. He plops her into the chair, unmasks her, and attaches the helmet.
The currents of the machine begin to make her stir, but she’s still in a sleepy state and her words don’t quite form sentences yet. “Where am…what’s happen…” The goon tells her, and it seems to break her into a somewhat more coherent state as the information sinks in. “A brainwashing device?” She tries to remove it, but her arms won’t obey her. They do obey him though when he instructs her, “Play with those big batty breasts of yours!” She’s horrified that her hands comply and she can’t do anything to stop it. She struggles to fight the process, but it’s too much, and soon she falls limp from the exertion.
The goon removes the helmet and snaps his fingers. Batgirl stares at him wide-eyed and ready for instruction. “Go get the Marconi Diamond.” “Yes.” Now, it’s Batgurl’s turn to show off her skills dodging and maneuvering her curvy latex clad body around and through lasers at the museum. She puts the diamond in her utility belt, makes her way back, and grabs her cape before returning successfully to Cat Woman. “Good girl.” She laughs. “This is purrfect…I can make her do anything I want…make her get anything for me…DO anything for me…”
While Cat Woman is occupied with planning her future thefts, the POV goon decides to take advantage of Batgurl’s current brainwashed obedience by having her strip completely naked for him. When she’s finished with her little striptease, she asks, “What else would you like me to do?”
Has Batgirl gone bad for good? Will she find her free will and break free? Or will she continue doing everything Cat Woman and her goons want her to do? Tune in next time. 😉
This clip features a NUDE BONUS SCENE at the end.
Clip Includes: Superheroines, Batgirl Parody, Cat Woman, Laser Obstacle Course, Silent Alarm, Gas, Catsuits, Maneuvering, Campy, Cosplay, Perils, Practical FX, Limp Fetish, Sleepy, Costume, Sleepy Rag, Eye Crossing, Eye Rolling, Body Pans, Mind Control device, Struggling, Made to touch boobs, Made to Strip Fully Nude, Free Will Erased, Brainwashed to be Bad, Transformation, Unmasked, Ludella Hahn, Monica Jade, Contains FULL NUDITY
Tags:Maledom,Male Domination,superheroine,superheroines,Humiliation,storyline,story line,Mixed Wrestling,mixed fight,Submission,froced orgasm,super hero, super heroines,superheroines porn,superheroines adult movies