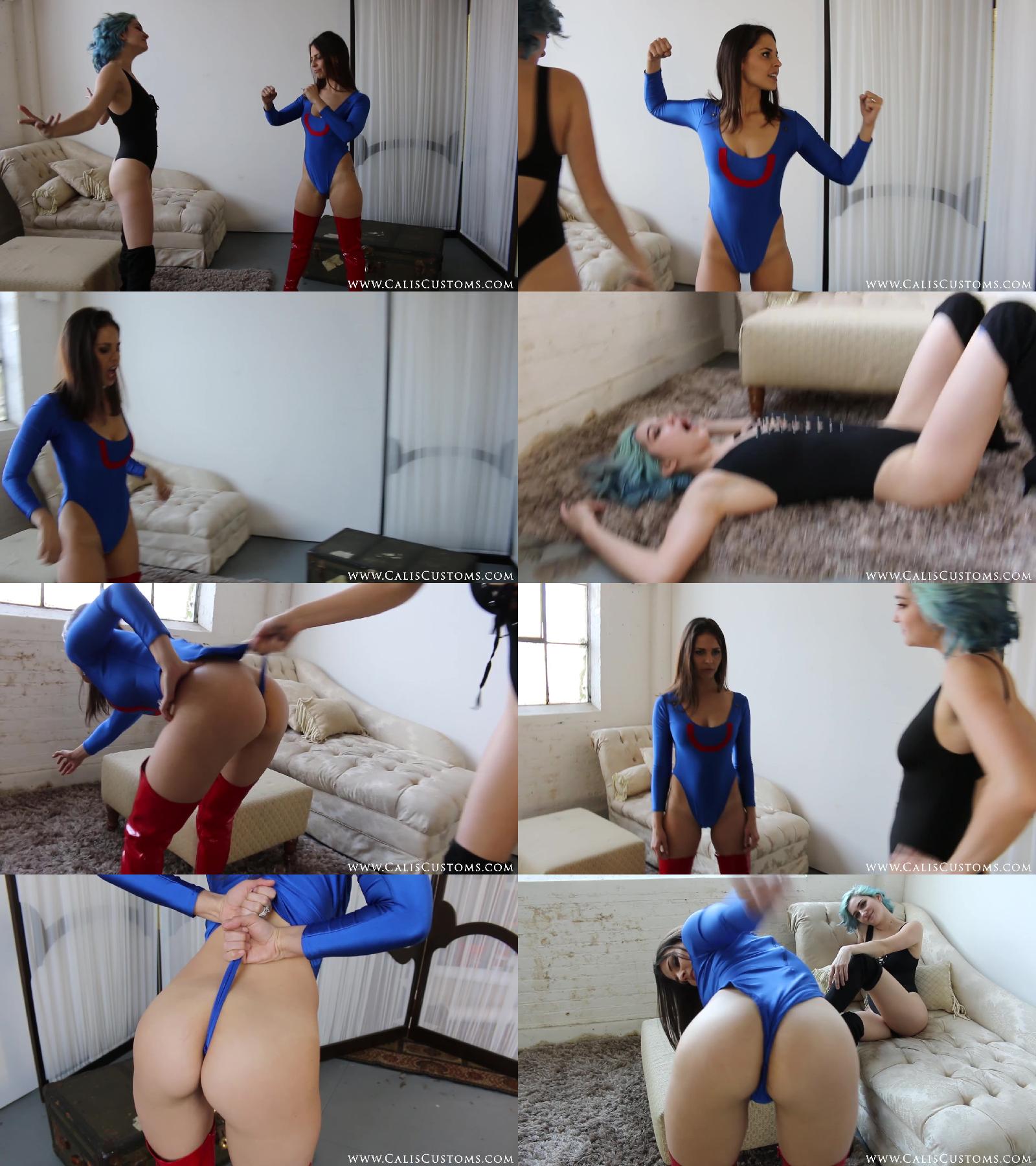 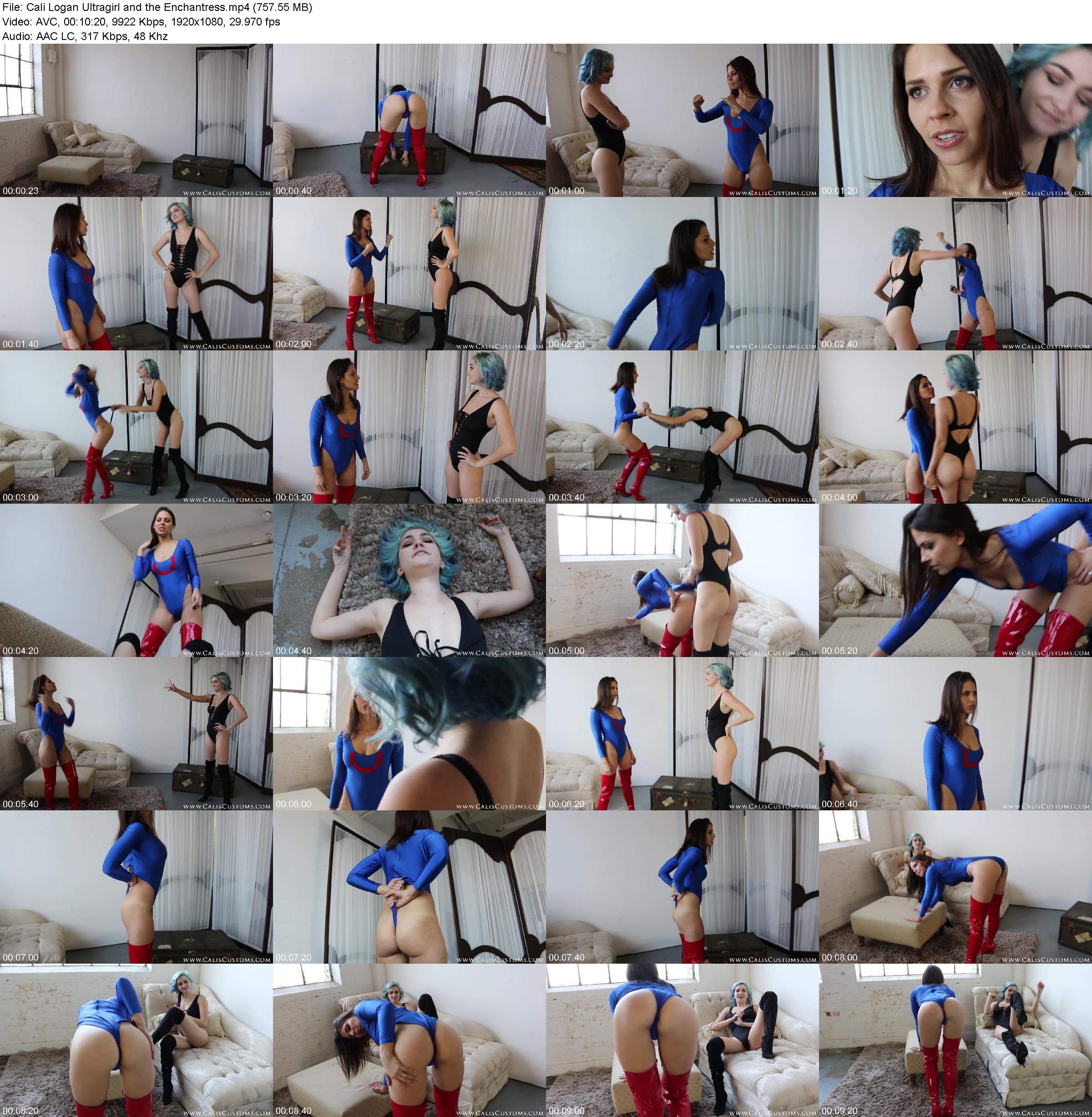 Ultra Girl (Cali) has received an anonymous tip on the whereabouts of a fiendish new supervillain in town called the “Enchantress” and arrives at their supposed hideout to investigate. Unfortunately for her the tip was from the villain herself, and she’s about to walk right into a trap.
As she’s snooping about the place, she is suddenly met by a mysterious woman (Skye Blue).
“You must be the Enchantress,” says Ultra Girl as she quickly gets into a fighting stance. The woman doesn’t respond, but simply smiles and snaps her fingers, which freezes Ultra Girl in time. The woman then prepositions herself behind ultra girl and snaps her fingers to unfreeze her foe. The confused superheroine gasps when she sees that the woman somehow teleported behind her.
“Oh, so you can teleport, huh?” says Ultra Girl as she turns to face the Enchantress. “No matter. I’ve defeated hundreds of villains who were much more power-” But her speech is cut off when the Enchantress freezes her again.
The villainess approaches her frozen foe and pulls the back of ultra girls costume into a powerful wedgie. She then returns to where she was standing and snaps her fingers.
“-ful than you,” ultra girl finishes her statement. She absent-mindedly picks the wedgie, the thought that somehow the villains might have caused of course never crossing her mind.
She charges at the Enchantress and delivers a powerful punch that causes the villain to stumble backwards. Then another punch. Then a knee to the gut. Followed by an uppercut to the chin.
Enchantress tries to fight back with a few swings of her own but ultra girl blocks each one with ease. Realizing that she’s no match for Ultra Girl physically, Enchantress refers back to her magic and freezes Ultra Girl. Once again she pulls the heroine’s costume into a deep wedgie, this time unfreezing her while still yanking the back of her leotard to revel in her embarrassment. The confused ultra girl quickly pulls away from the laughing villainess, and slowly deduces that the woman didn’t teleport earlier, but instead had somehow frozen her, which explained the wedgie she had from earlier. She recalled how the woman kept snapping her fingers and realizes that that must be how she freezes her.
Quickly she charges the villain and grapples with her, interlocking their hands so she can’t snap her fingers. The two continue to grapple with each other until ultra girl finally pulls Enchantress into a knee to the stomach and throws her to the ground. Enchantress lays on her back in pain as ultra girl stands over her and bends all the way over, her ass high in the air, and wraps her hand around the villains neck.
“Now to take you to jail,” she says. But Enchantress quickly snaps and freezes Ultra Girl again, and frees herself from her grip. After standing and dusting herself off, the angry villainess wedgies the heroine again. Deciding that shes done playing around, she unfreezes ultra girl, who is surprised to find the villain no longer in her grasp and her costume yanked up her rear again. She adjusts her costume and faces the villain ready for round two. However a simple wave of the hand from the powerful sorceress drops the heroine instantly into a trance. Ultra girl stands slack jawed and wide eyed, as Enchantress informs her that she is now her slave. “Yes, Enchantress,” says Ultra girl without hesitation.
Now the Enchantress decides to have the heroine to do her dirty work for her, and commands her slave to give herself a wedgie, which she obeys instantly. Satisfied with her victory, the Enchantress gives the superheroine one last order, telling her to stand facing the corner of the room and repeat the phrase, “I love having a wedgie” over and over again forever.
This clip runs 10 minutes long and includes woman following orders, wedgies, cosplay, costumes, magic control, female training, peril.
Category: SUPERHEROINES
Related Categories: WOMAN FOLLOWING ORDERS WEDGIES FEMALE TRAINING COSPLAY MAGIC CONTROL
Keywords: cali logan skye blue ultragirl
tags:superheroine,superheroines,lesbian domination,lezdom,story line ,storyline,forced orgasm,submission,humiliation,super hero, super heroines ,superheroines porn,superheroine porn , superheroines adult movies,superheroines fetish,magic power,magic control,fantasy,lesbian sex,lesbian porn,lesbian bondage,,lesbian strapon,spanking,lesbian bondage,slave,slavery,mistress,enslavment ,catfight,cat fight,,female fighting,ring wrestling,female wrestling,Scissors,catfighting,cat fighting,catfight fetish,catfight porn ,facesitting,mind fuck,mind control,hypnosis