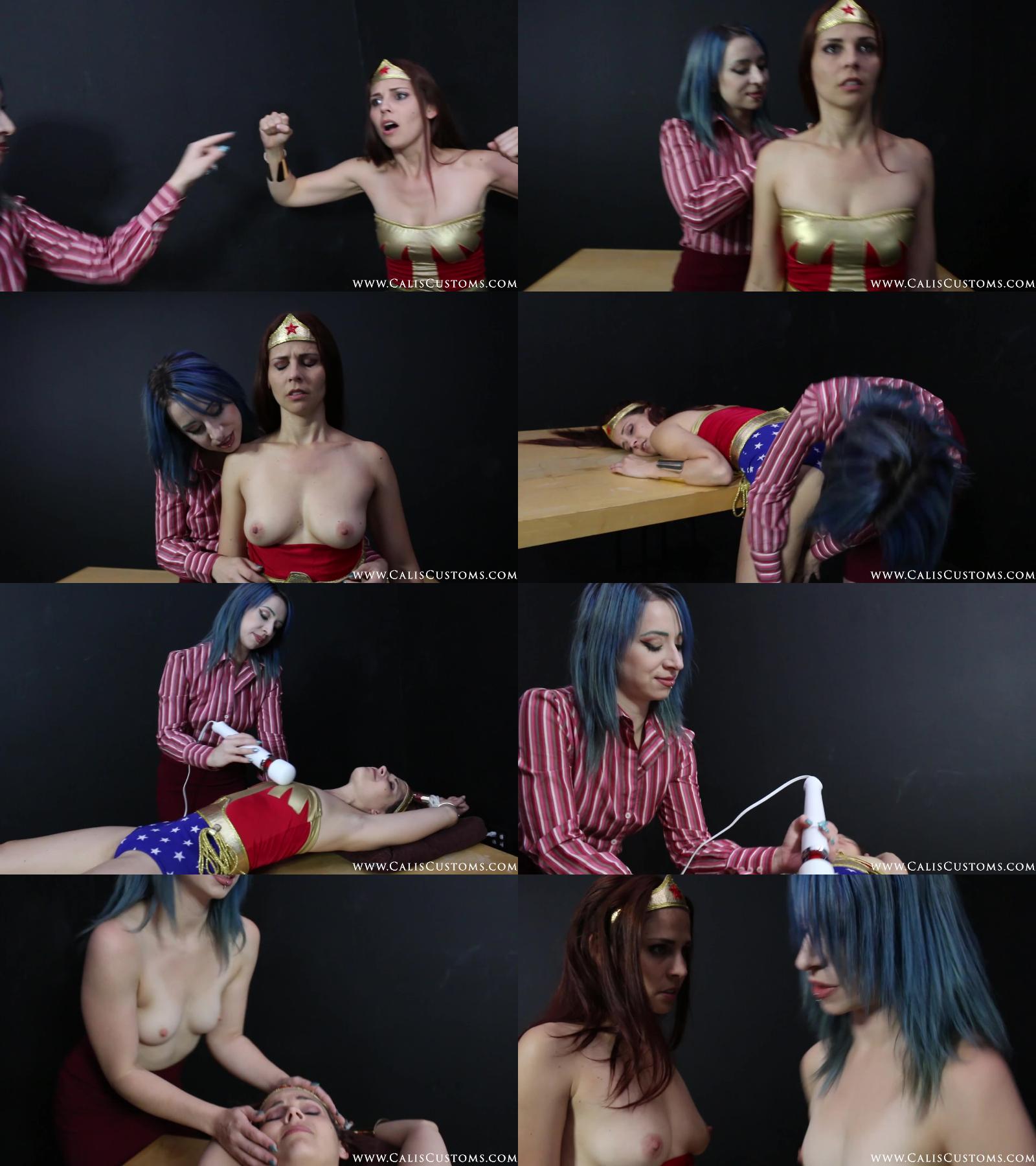 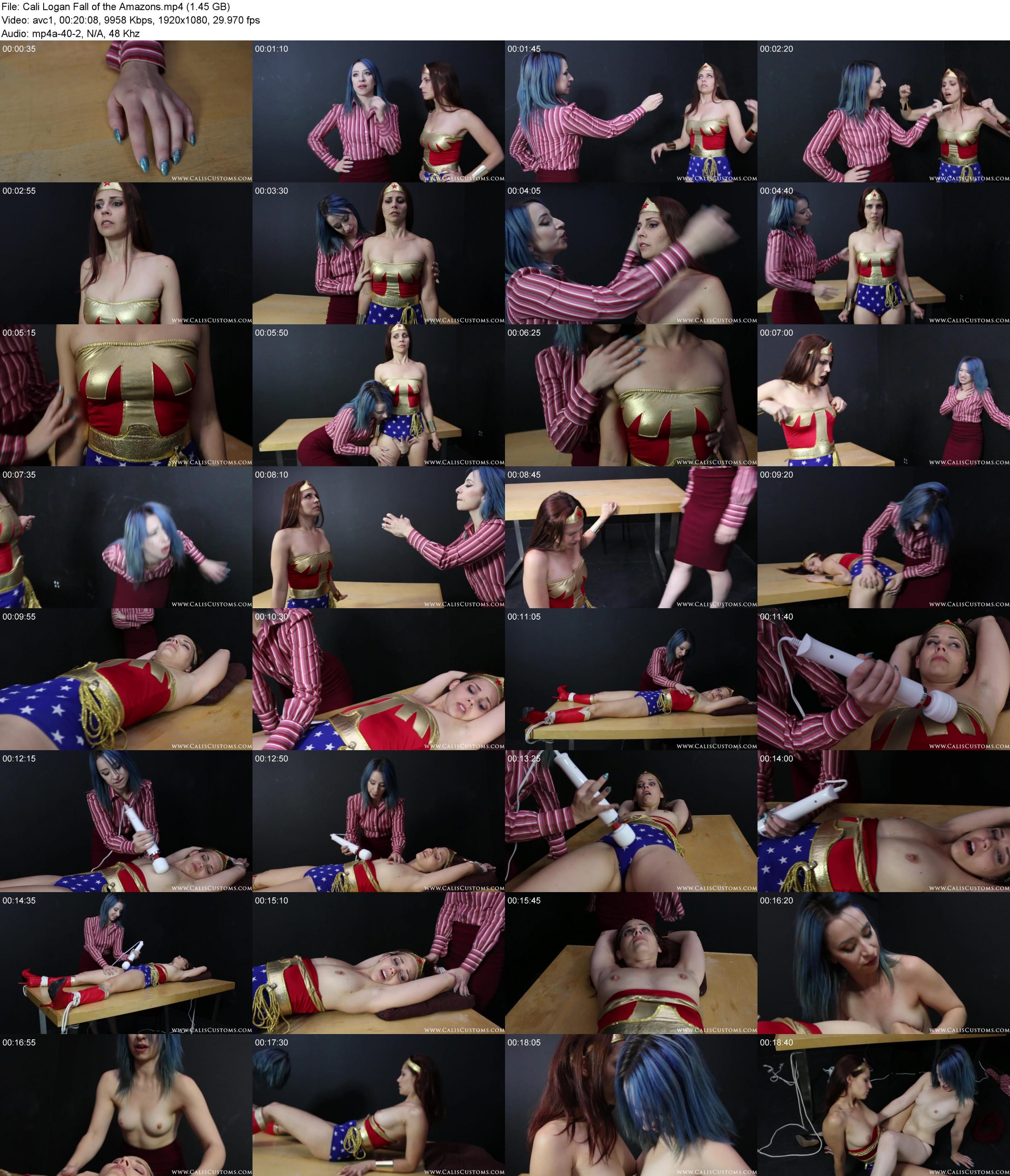 Lydia says with an evil grin: I’ve been waiting for you..

WonderCali says: What do you want ?

Lydia says: I’ve been studying you “amazons”, you’re not so tough. When I’m done you will tell me all your secrets.

WonderCali, stunned by the arrogance of this woman, laughs.

Lydia is not deterred and demands: What is the source of your powers ? Where is paradise island ?

WonderCali is shocked that Lydia knows about Paradise island.

WonderCali says: Who told you about Paradise Island ?

Lydia just laughs and says: I have my sources. Soon you will tell me everything.

Lydia then points one finger at WonderCali and issues the spell command: OBEY!

WonderCali is immediately zombified by the order.

WonderCali, her mind held by Lydias command stands statuesque, awaiting her next order.

Lydia decides to test the level of control and says: Kiss Me.

Lydia then moves to stand behind WonderCali and reaches around to caress her body.

Lydia says: I am going to enjoy breaking you..

Lydia then reaches around and caresses WonderCalis tits, making sure to rub her nipples through her costume.

WonderCali, her mind still in the grip of the command, looks down confused at what Lydia is doing to her.

Lydia then pulls down WonderCalis top to properly play with her tits.

This, however, proves to be enough to help WonderCali to snap out of her trance.

WonderCali is outraged and with a surge of energy she breaks free of Lydia and of the invisible force, sending Lydia stumbling away to the floor. WonderCali pulls up the front of her costume.

WonderCali is humiliated… nobody exposes her breasts!

So WonderCali marches over to Lydia and shoves her across the room.

Again WonderCali goes over and picks Lydia up and then punches her in the stomach, folding her over and then an uppercut to the chin straightening Lydia up and sending her stumbling in to the wall.

WonderCali then stands, hands on hips, and asks Lydia if she wants to surrender ?

Lydia, recovers her composure and says: I’ll teach you to mess with me !

Lydia reaches out with one hand and grips, but now the invisible hands grip wondercali around the neck !!

WonderCali struggles to free herself from the unseen grip trying to choke her.

Lydia then clenches her other hand and with an evil grin punches upwards in to the air.. at the same time an invisible hand strikes WonderCali straight in the pussy!

WonderCali drops to her knees and her hands immediately grab her sensitive area to try and protect it from further punishment.

Lydia laughs and walks over to the kneeling WonderCali.

Lydia picks the moaning WonderCali up by her hair.

Lydia then walks WonderCali over to a table and says: “See I told you amazons aren’t so tough”

And Lydia slams WonderCalis face in to the table.

Lydia picks WonderCalis head up again by the hair.. WonderCali is now only semi conscious, her arms hanging limply by her sides.

Lydia then slams WonderCali in to the table again. This time she releases her hold and WonderCali out of reflex rebounds back up to standing.. she sways on her feet for a second and then collapses.

WonderCali wakes up lying on her back on a table, her arms tied over her head.

She struggles to break free but she is too weak.

WonderCali says: What are you planning to do ?

but Wondercali, despite the stimulation manages to keep herself together – just.

So Lydia turns her attention to between Wondercalis legs..

Lydia rubs WonderCali between her legs and says: Perhaps i should try here ?

WonderCali’s eyes go wide and she struggles even more: Noo ! Don’t you dare !

WonderCali moans and protests but even she can’t hold out forever and her body bucks as an orgasm takes her.

Lydia caresses her sweaty body and says: Ready to talk ?

But WonderCali, although weakened, through gritted teeth says: No !

And again Lydia applies the wand to WonderCalis most sensitive area.

Again Wondercali moans and tries to hold it together but again she is defeated and surrenders to another orgasm.

Lydia then pulls down her own top and bends over, putting her tits in WonderCalis face.

Lydia encourages Wondercali to give in to her desires and says: Do you submit ?

WonderCali, drained by her orgasms, her body covered in sweat, breathing heavily, greedily sucking on Lydias tits.. finally manages to get a hold of herself and says: Go to hell.

Lydia is impressed with WonderCalis resistance, and infact is turned on by it. She kisses WonderCali deeply.

Lydia then unties WonderCali, helps her off the table.

Lydia then grabs WonderCali in a passionate kiss and then forces her to the floor.

Lydia scissors her legs with WonderCali and they trib together.

Soon they are both moaning as they orgasm together.

Lydia then kisses WonderCali and says: Now you will tell me everything.

Wondercali numbly says: Yes Mistress as she lowers her face down between Lydia’s legs in humble submission.