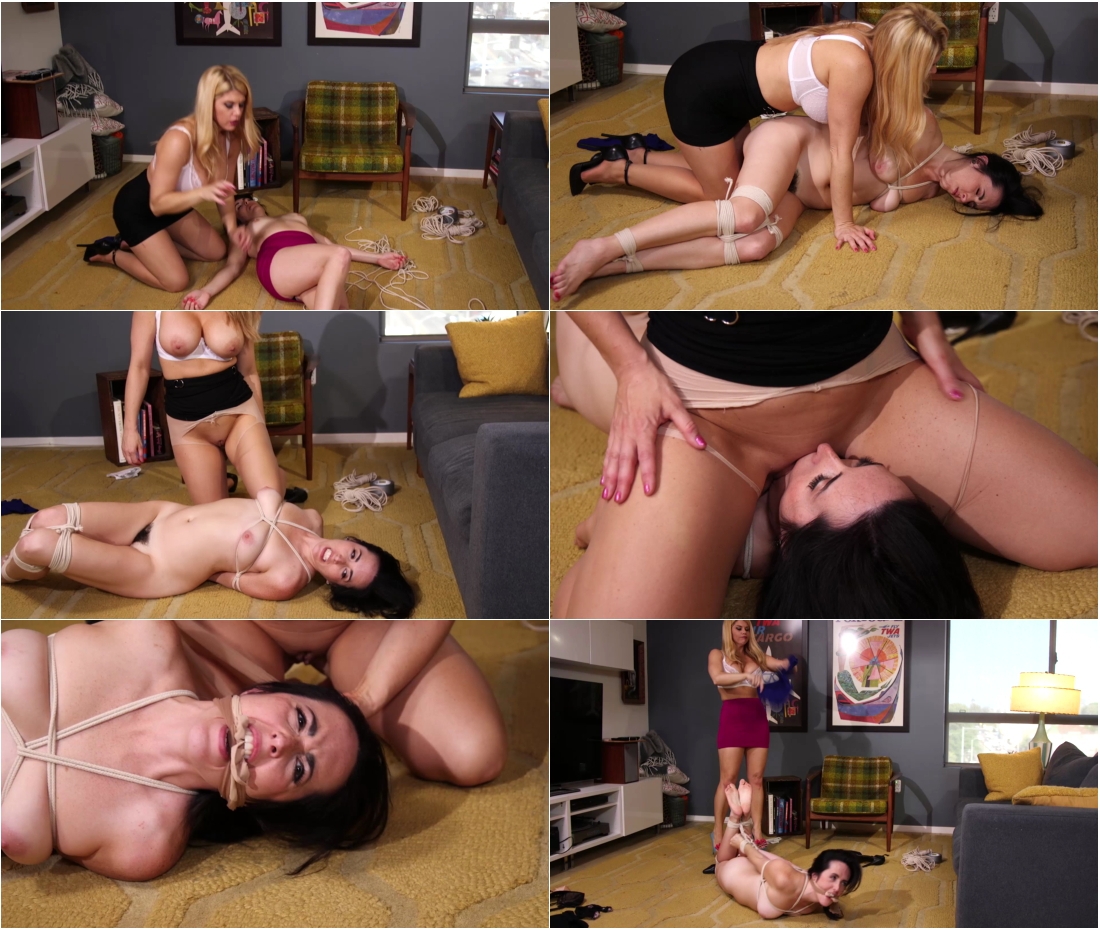 Detective Carissa has been captured by jewel smuggler Dixie because she managed to get in the way of one of Dixie’s high stake deals. The video opens with Carissa, with her tits out of her bra, escaping the ropes that Dixie had her tied in and going off to hide. Upon her return, Dixie finds a bunch of rope and no Carissa. That is until Carissa pops up behind her, grabs Dixie and hand over mouth smothers her with a soaked cloth. Once Dixie is limp, Carissa strips Dixie out of her clothing and gropes her naked body-she has plans for payback with this one!
Carissa is finishing up tying the last bits of rope when Dixie comes out of her slumber. Carissa smacks her tits around while telling Dixie her plan to take her clothes and assume her identity to make the big deal and then she’s going to bust everybody. But since Dixie liked Carissa’s big tits so much she decides that she is going to smother her with them-get a real up close look at them. Dixie struggles for breath under those big tits. Carissa is about to fuck her world up and wants some real pleasure before doing so-she rips open the crotch of her pantyhose and sits her pussy on Dixie’s face forcing her to lick her pussy. Dixie refuses but has no choice or when Carissa smothers her with her pussy too. Carissa fucks Dixie’s face until she cums all over Dixie’s face and laughs at her as she takes off her pantyhose and cleave gags her with them. Carissa whips Dixie into a hogtie then changes into Dixie’s clothes. She gives her a kiss, tasting her own juices on Dixie’s lips and leaves her there struggling naked for the authorities to find.
Category: LESBIAN DOMINATION
Related Categories: BONDAGE, PUSSY EATING, DAMSEL IN DISTRESS, FACE SITTING, SMOTHER
Keywords: escaping, big tits, sleepy, limp fetish, tit busting, boob smothering, , clothes destruction, clothes swapping, lesbian, forced stripping, groping, pantyhose, pantyhose gag, Carissa Montgomery
tags:lesbian domination,lezdom,story line ,storyline,froced orgasm,submission,humiliation,