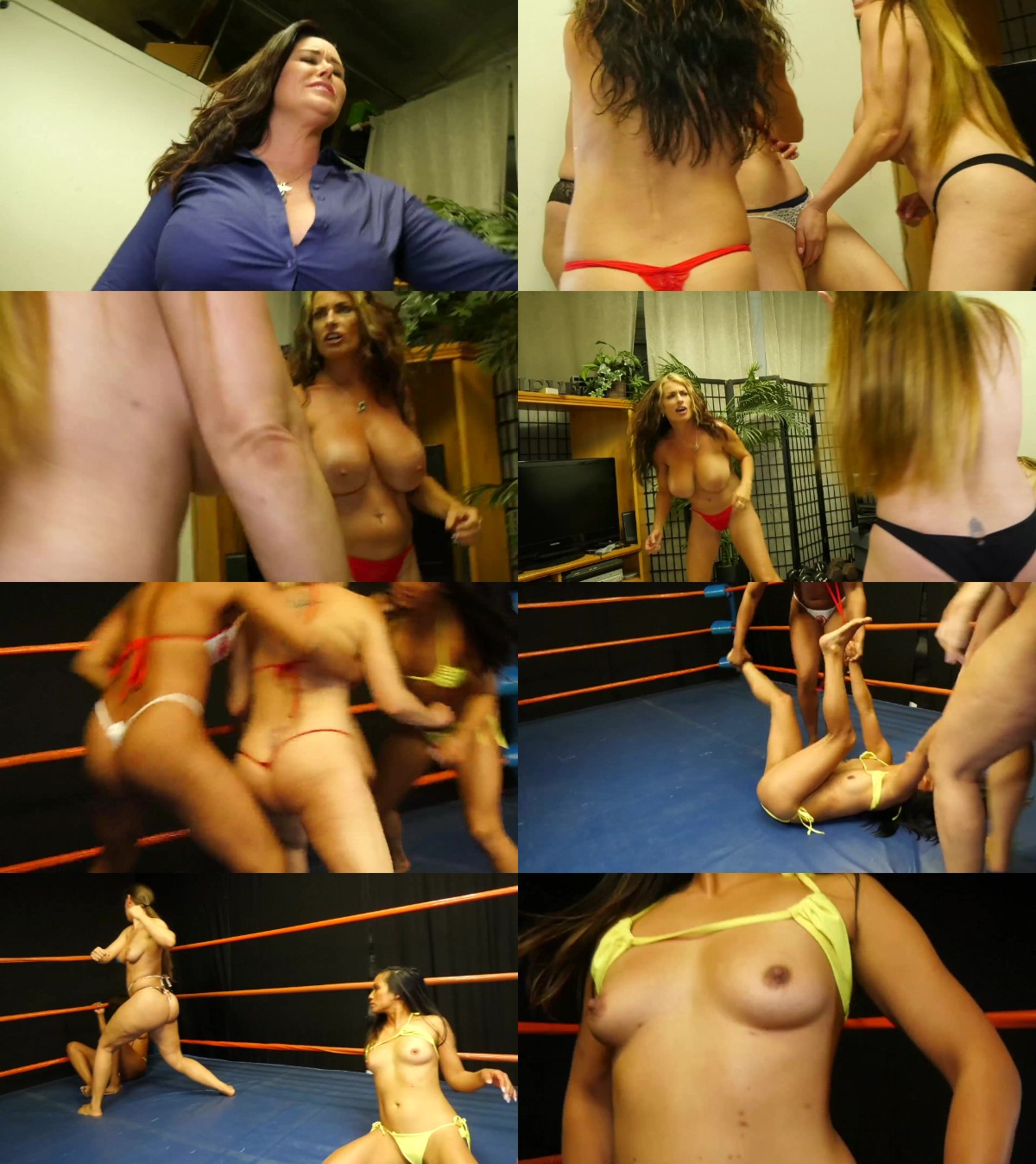 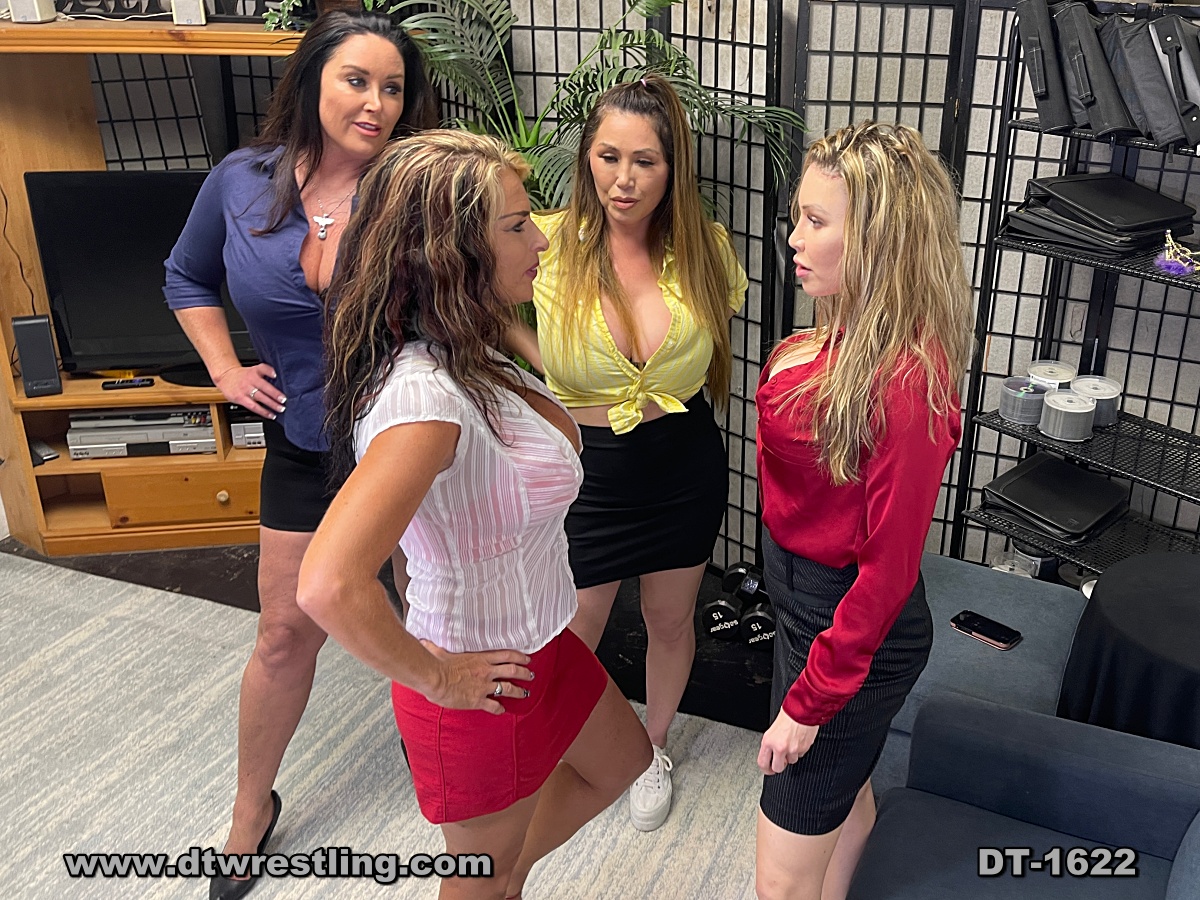 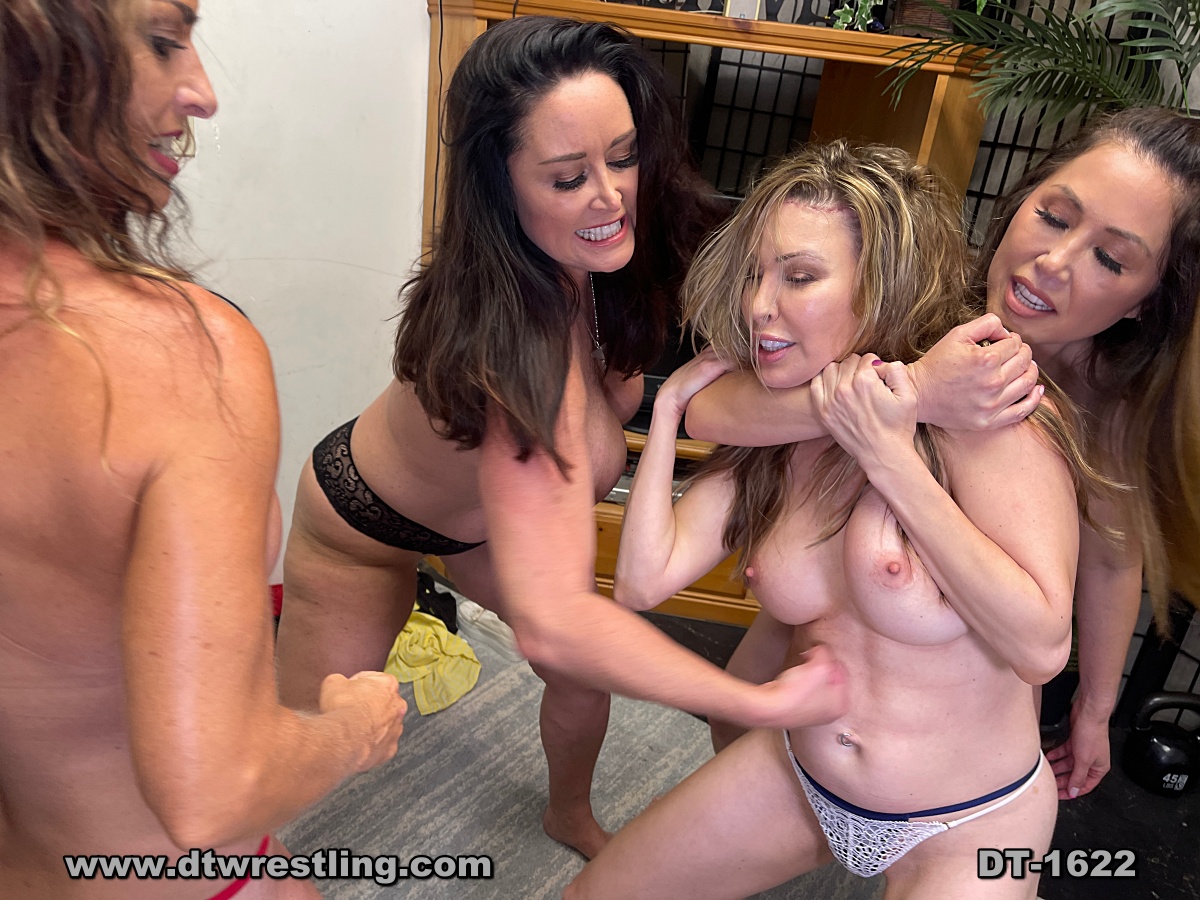 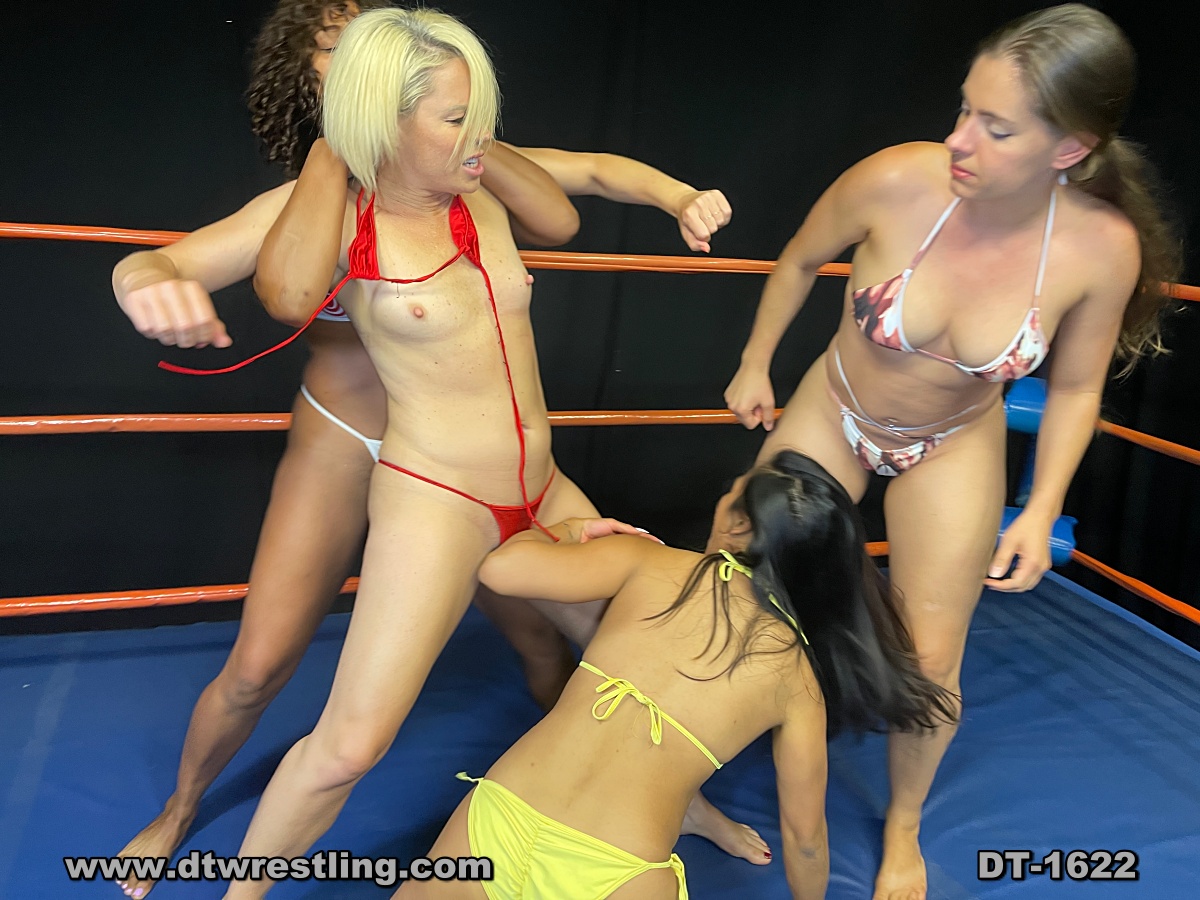 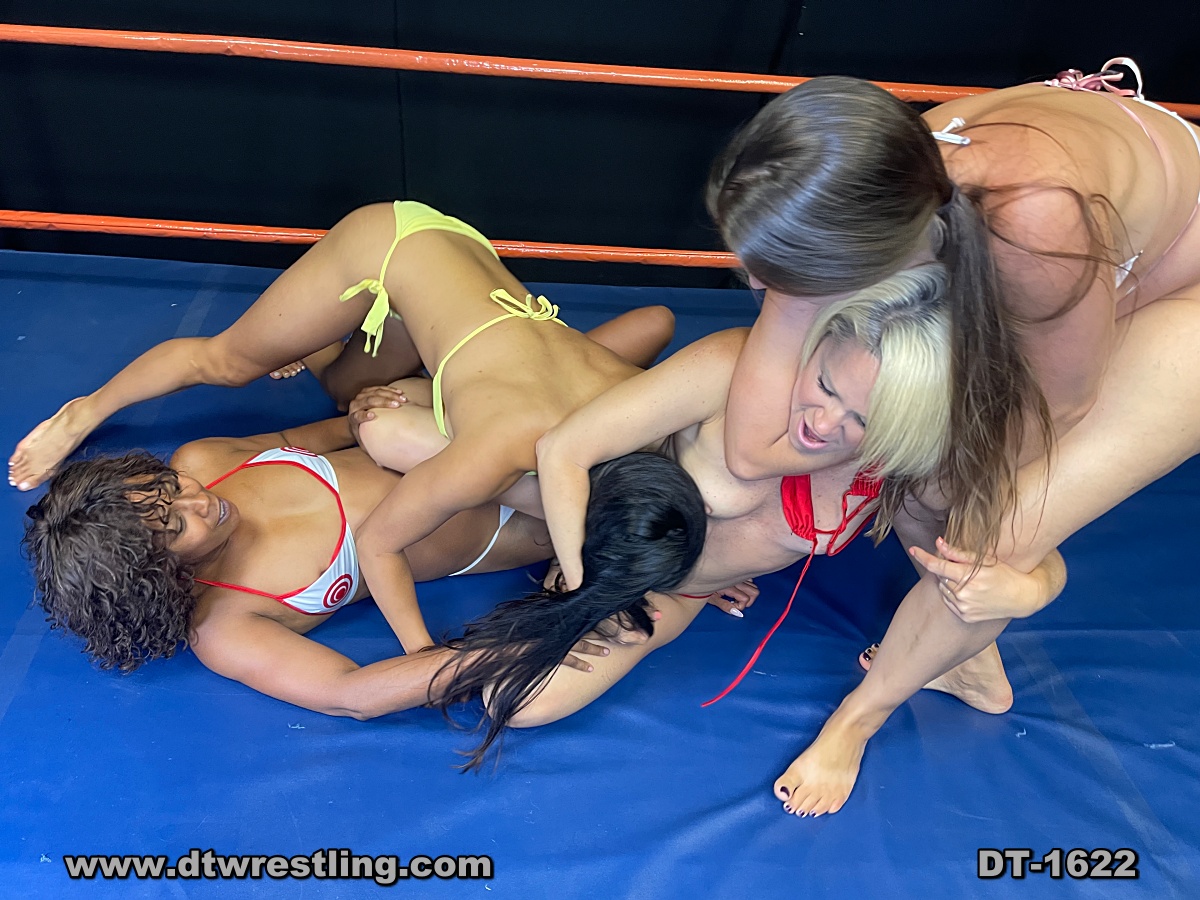 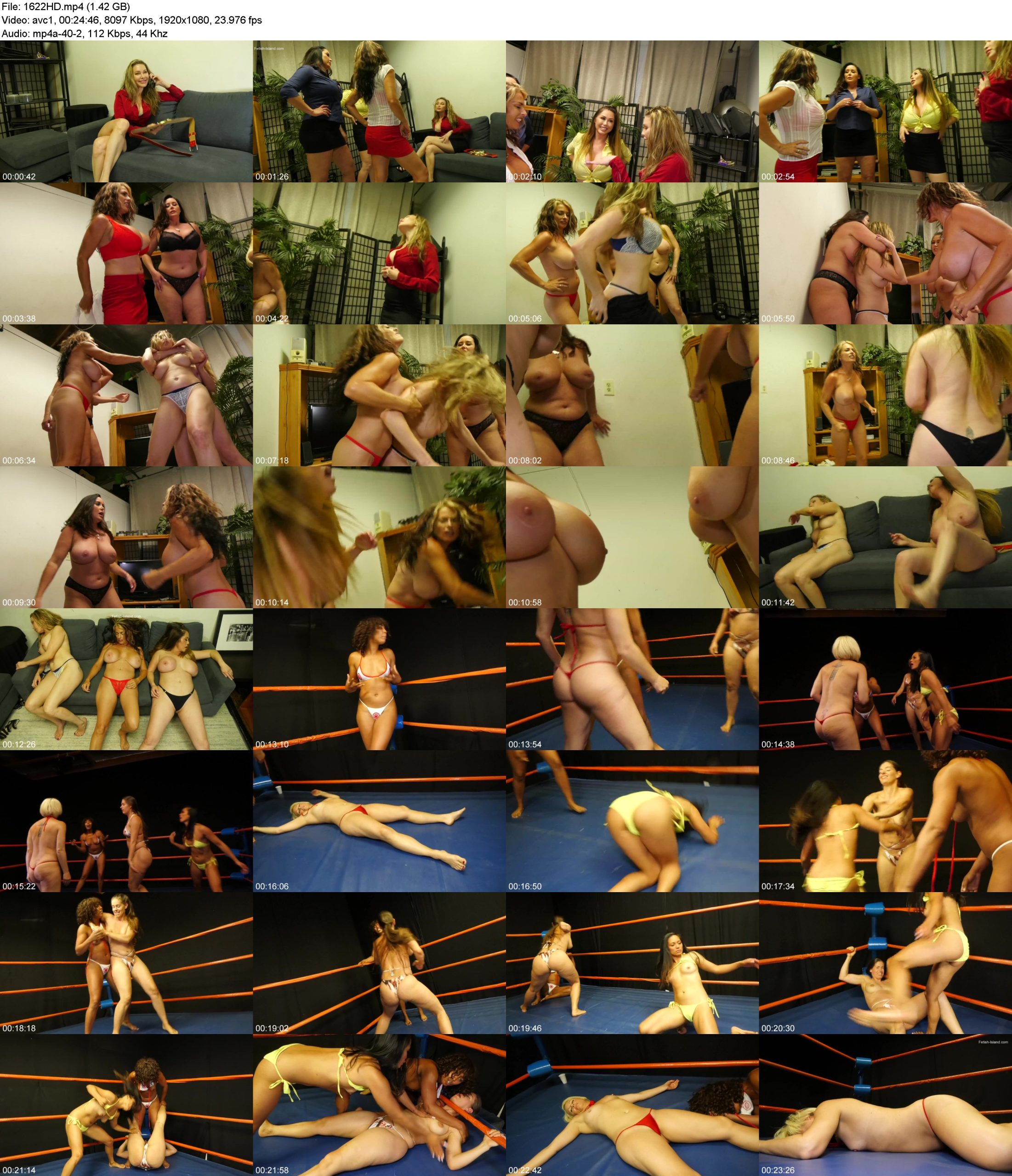 Erika, Kianna, Christina, Goldie, Skylar, Misty, Helena & Lana
WOW – how often do you get to see eight fabulous babes in one match – well here it is, yes there are eight topless wrestlers in this one video, so get ready to be wowed. It starts with Erika Jordan on the phone getting the new magazine ready when Christina Carter, Goldie Blair and Kianna Dior enter and are not happy with this haughty bitch who thinks she is in control. Soon they decide to strip and see who is the toughest but it ends up mostly all three beating up Erika and I mean they beat the hell out of this gorgeous grappler, while one holds her the other two throw blow after blow to her rock hard gut, then fists to her soft breasts and finally to her face which leaves out on the couch. Now they turn on each other, two against one and when one goes down they turn on each other till one wakes up for more two on one domination. These are all tough hard hitting babes so it takes a lot of battering till finally only one is left standing. And this is only the half of it as we now go to the ring where the second foursome will do battle and they consist of: Skylar Rene, Lana Violet, Misty Stone and Helena Locke – here we go again as they constantly gang up to destroy one, then move on to the next victim constantly changing sides as it suits them. Classic two on one battles with suspended holds that allow for body busting, corner thumping and ring rolling to the max. The tops are soon ripped off from the savage destruction, you know all of these ladies and you know how they bring the mayhem and putting them all together only adds to the fun, again only one of these beauties remains standing and she is.. can’t spoil the surprise. EIGHT IS GREAT and you will agree !!!!!!
tags:lezdom fetish,lesbian domination porn,catfight,submission ,humiliation,overpowered,facesitting,cunt busting gangbang