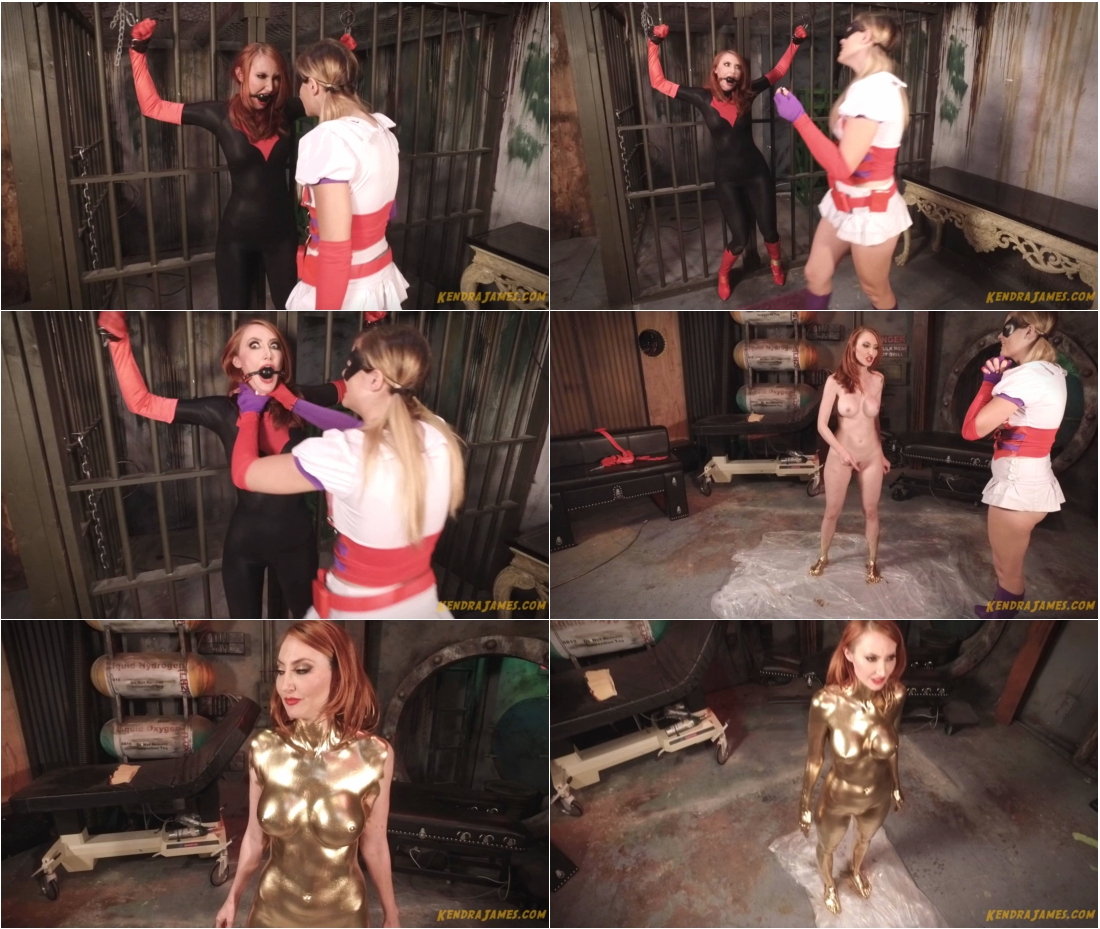 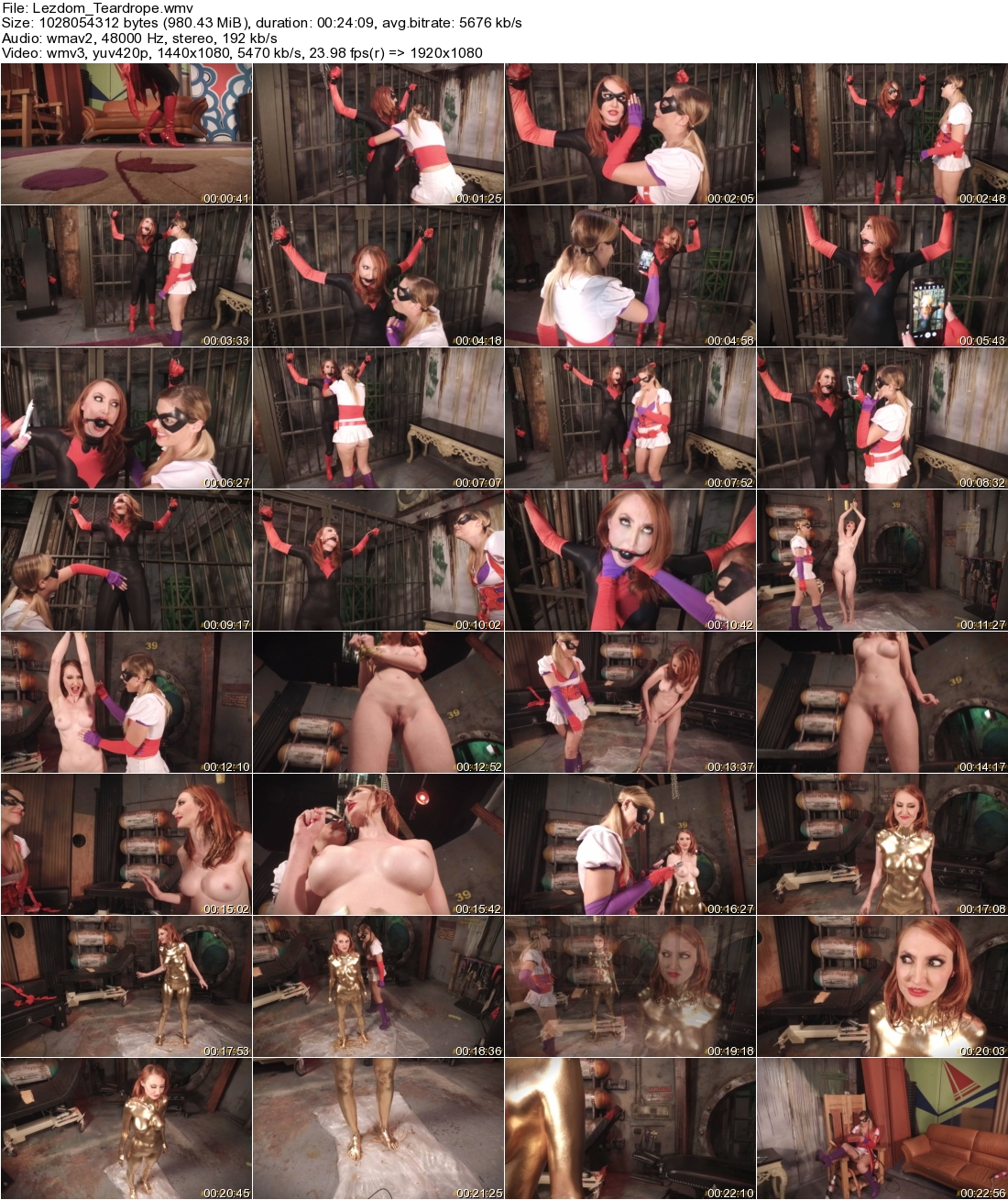 Once again Batwoman finds herself wandering into dangerous places in search of evil villains. This time she’s stumbled across the Joker’s lair only to discover it empty… at least there’s no Joker in sight. Unfortunately the crimson night missed the psychotic clown lurking in the corner and finds out the hard way Harley was waiting for her. With a swift swing of a bat and a crack to Batwoman’s head, the detective is knocked to the floor and out like a light. When she awakes she find herself bound to cold steel bars and the bratty little clown is dancing in circles giggling in triumph. Struggle as she might Batwoman can’t prevent Harley from stripping her of her belt, putting it on and modeling it to mock her. The humiliation doesn’t end there – Harley wants to see the woman behind the bat and toys with Batwoman’s mask, teasing it up her face and threatening to reveal her secret identity to Mr. J and the world. The red detective pleads for Harley not to unmask her, playing to the clown’s sympathies, but Harley has no sympathy and quickly snatches the mask off of Batwoman’s face revealing her true identity. Shocked and furious, the psycho begins to pummel the bat with blows to the face and kicks to her stomach, beating the bound and helpless Batwoman before pulling out her phone to live stream her identity to the Joker’s facebook and the world. Kathy Kane tries to hide her face, but the clown yanks her head back to expose her maskless eyes. After dancing, prancing and mocking the crushed Batwoman live online, Harley puts her phone away and chokes the humiliated bat into oblivion.
When Batwoman regains awareness, she’s completely stripped of her costume and tied with her arms above her head. She struggles to try and free herself before Harley comes prancing into the room giggling and holding a giant syringe. Her eyes wide with fear, the detective looks from the clown to the needle back to the clown wondering what she could be doing with such a sinister looking syringe full of melted gold. Despite her desperate protests, Harley plunges the needle into Batwoman’s neck pushing the syringe of molten liquid deep into her flesh while explaining that soon the super heroine will be completely immobilized and turned into a solid gold statue. Who knows? Maybe Mr. J will even have her melted down and turned into a piece of jewelry for yours truly. The effects happen quickly and soon Batwoman’s feet are frozen into solid metal. It creeps its way up her legs, stiffening them as the hero tries to pick up her feet and kick Harley into next week. It’s no use and Batwoman is stuck in place helpless to move as the gold climbs higher up her body. Soon she’s completely gilded, a solid gold statue frozen in place for Harley and the Joker to keep as a trophy of triumph.
Includes, but not limited to: super heroines, super villain, cosplay, costumes, Gotham, Kendra James, Kendra Lynn, knock outs, belly punches, beat down, choke out, cat fight, humiliation, lesbian domination, nude female, freeze, frozen, gold statue, peril, damsel in distress, gag, live stream periscope, statue fetish, transformation fetish, magic transformation, parody
Category: SUPERHEROINES
Related Categories: FREEZE, HUMILIATION, BONDAGE, TRANSFORMATION FETISH, LESBIAN DOMINATION Keywords: mistress kendra, milf, s.h.i.p, cosplay, harley quinn, gold statue, damsel in distress, kendra lynn, magic transformation, kendra james, super villain, lesbian domination, batwoman, cat fight, female domination
tags:superheroine,superheroines,lesbian domination,lezdom,story line ,storyline,froced orgasm,submission,humiliation,super hero, super heroines ,superheroines porn,superheroines adult movies,batwoman,ballgag,bondage