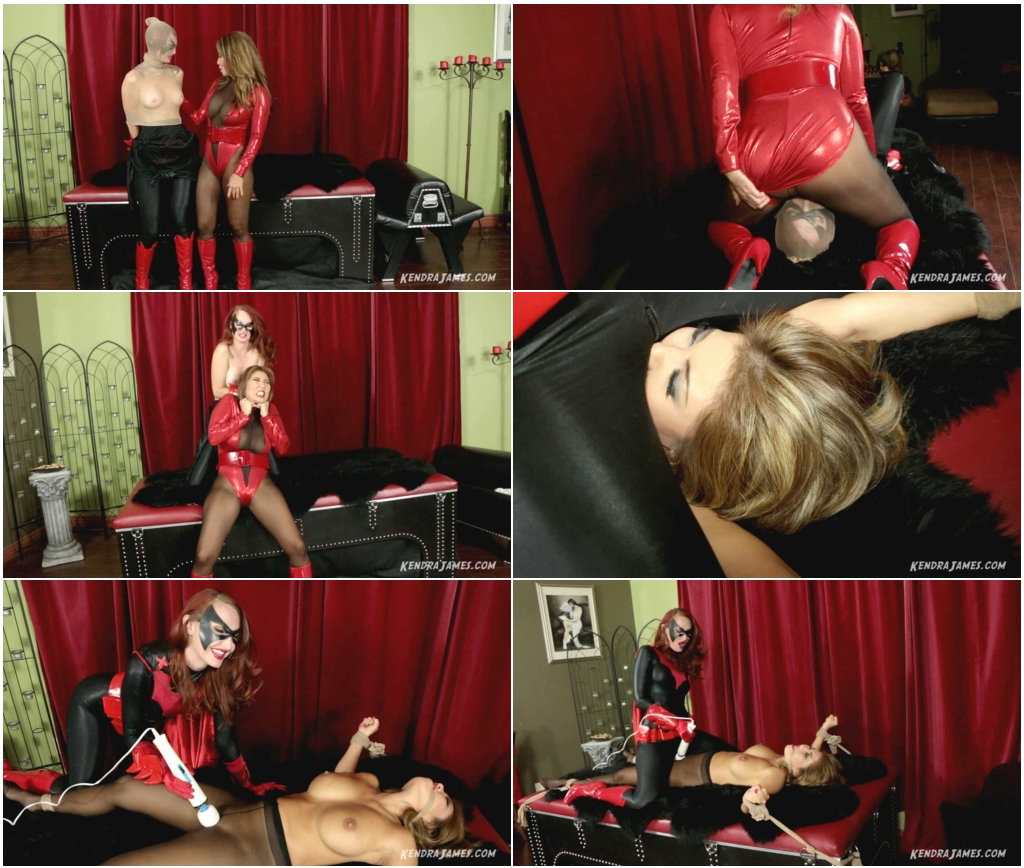 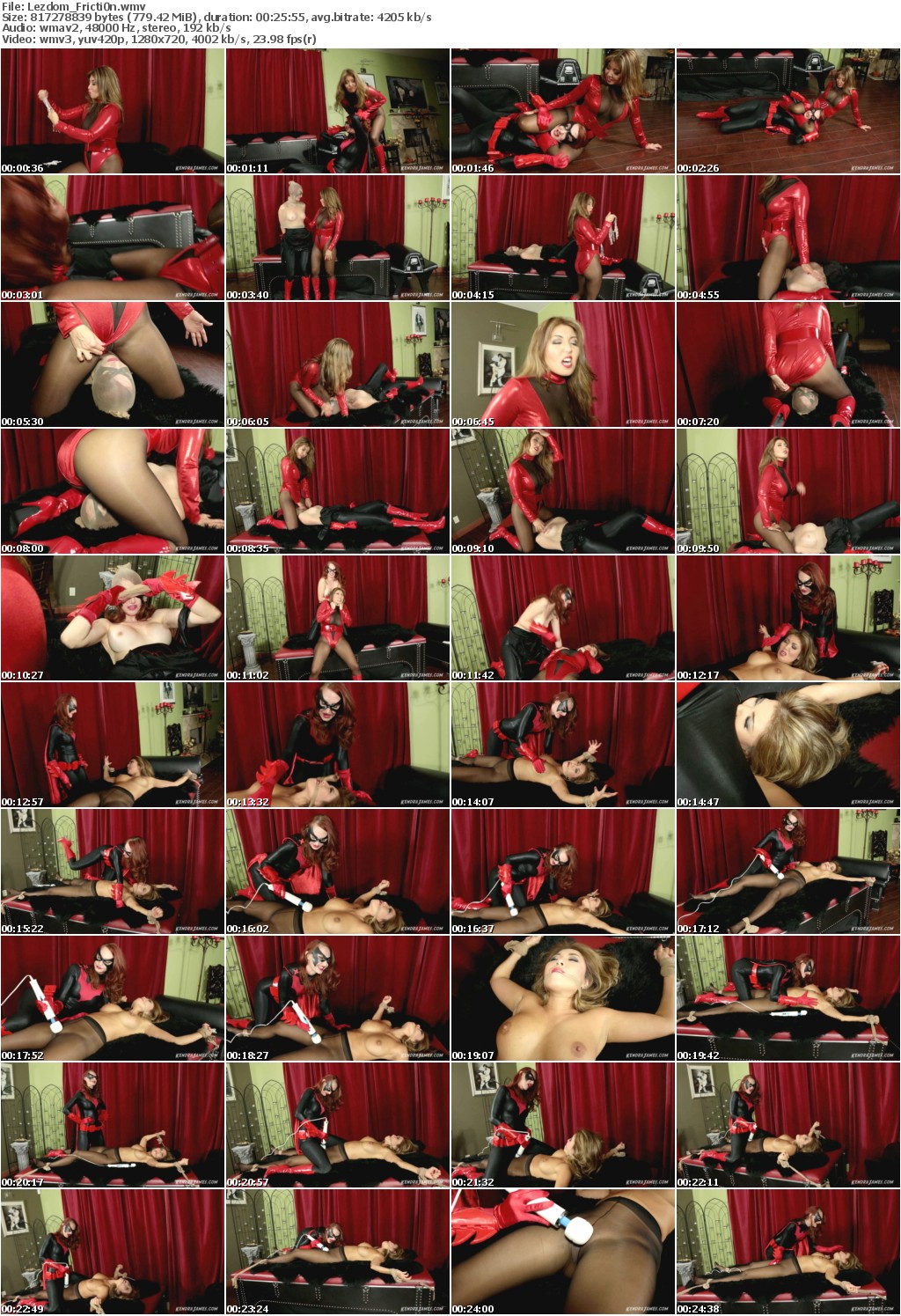 All the way from the dark underbelly of Tokyo comes the devious criminal mastermind Friction. Known for the vice grip of her thighs and razor sharp pantyhose (a technology provided to her by renowned scientist turned evil, Hypnatrix) she’s gotten bored with her regular stomping grounds and decided to pay a visit to the famous Center City. After making a big score on a bunch of diamonds and pausing to revel in the new loot, Friction is suddenly confronted by Batwoman. The crimson detective has been alerted to this new criminals whereabouts, but is unprepared for her shrink wrap pantyhose technology. With one punch and a flex of her thigh Friction has Batwoman in scissor head lock, the detective’s neck is slowly being compressed and all of the air choked out of her. After getting a burst of strength the crimson knight breaks free, but only for a moment as Friction has more tricks up her spandex sleeve! The Asian villain produces more pantyhose shrink wrap tossing it at the bat and covering her in tight, binding nylon. Encased from head to toe all Batwoman can do now is struggle to break free.With every breath the dragon ladies shrink stocking get tighter around Batwoman, slowly compressing the life out of her. Unhappy by how slowly the constricting lingerie is doing its job, Friction decides to straddle the face of the bound hero. She crams her sweet pussy down on the detectives face making it impossible for her to taste the oh so precious air she needs. The face sitting and smothering continues as the Asian villain torments the bound hero only to be stopped by a mysterious phone call asking the thief if she would like to steal the mysterious golden stockings of Aphrodite. This is the break the fallen hero needs to free herself and turn the tables on her jade queen captor. Batwoman wraps Friction’s own constriction stocking around the surprised villains wind pipe until she succumbs to their constricting powers. Now it’s Batwoman’s turn to bring this villain to justice but only after she is able to impose a bit of pay back. After struggling and nearing meeting her doom in the contriction pantyhose, Batwoman has been able to free herself and take down the Asian silk covered dragon lady with her own nylon weapon. After wrapping the pantyhose around the theifs neck and choking her into oblivion, Batwoman decides it’s time for some payback, she’s going to tie her new enemy up and make an example out of Friction. Restraining her with constriction nylon, the theifs very own technology, the crimson night has her spread eagle and totally helpless. The scarlet detective starts the humiliation of Friction by attacking her pussy with a hitachi, forcing it hard against the villain’s vulnerable clit. Her enemy moans in anger and pleasure, but this isn’t nearly enough for Batwoman. After delivering several forced orgasms, the scarlet night climbs up and straddles the woozy villain, grinding the vibrator into her own pussy at the same time for a double superheroine/ villain orgasm! Batwoman laughs at the protesting criminal who is trying to scream through her gag. Just to shut her up and give Friction a taste of her own medicine, Batwoman sits on her face and wiggles her post orgasm pussy on it. A little bat cum in her mouth should shut her up! Now completly beaten Friction is able to do nothing more but lie on the table strapped down by her own devices and wait for the police to come pick her up.
Kendra James, Akira Lane, Batwoman, stockings, pantyhose, forced orgasm, stocking bondage, Asian girls, red heads, spandex, cosplay, costumes, villian in peril, face sitting, superheroines, encasement, face sitting, stockings, pantyhose, spandex, scissor hold, fighting, girl/girl, struggling, super villain, choking, s.h.i.p
Category: SUPERHEROINES
Related Categories: PANTYHOSE/STOCKINGS, FORCED ORGASMS, SCISSORHOLD, BONDAGE, FORCED BI Keywords: cosplay, strong woman, female domination, embarrassment, stockings, hitachi, akira lane, milf, forced orgasm, gagging, superheroine, pussy licking, big tits
tags:superheroine,superheroines,lesbian domination,lezdom,stroy line ,stroyline,froced orgasm,submission,humiliation,super hero, super heroines ,superheroines porn,superheroines adult movies,hitachi,bondage,batwoman