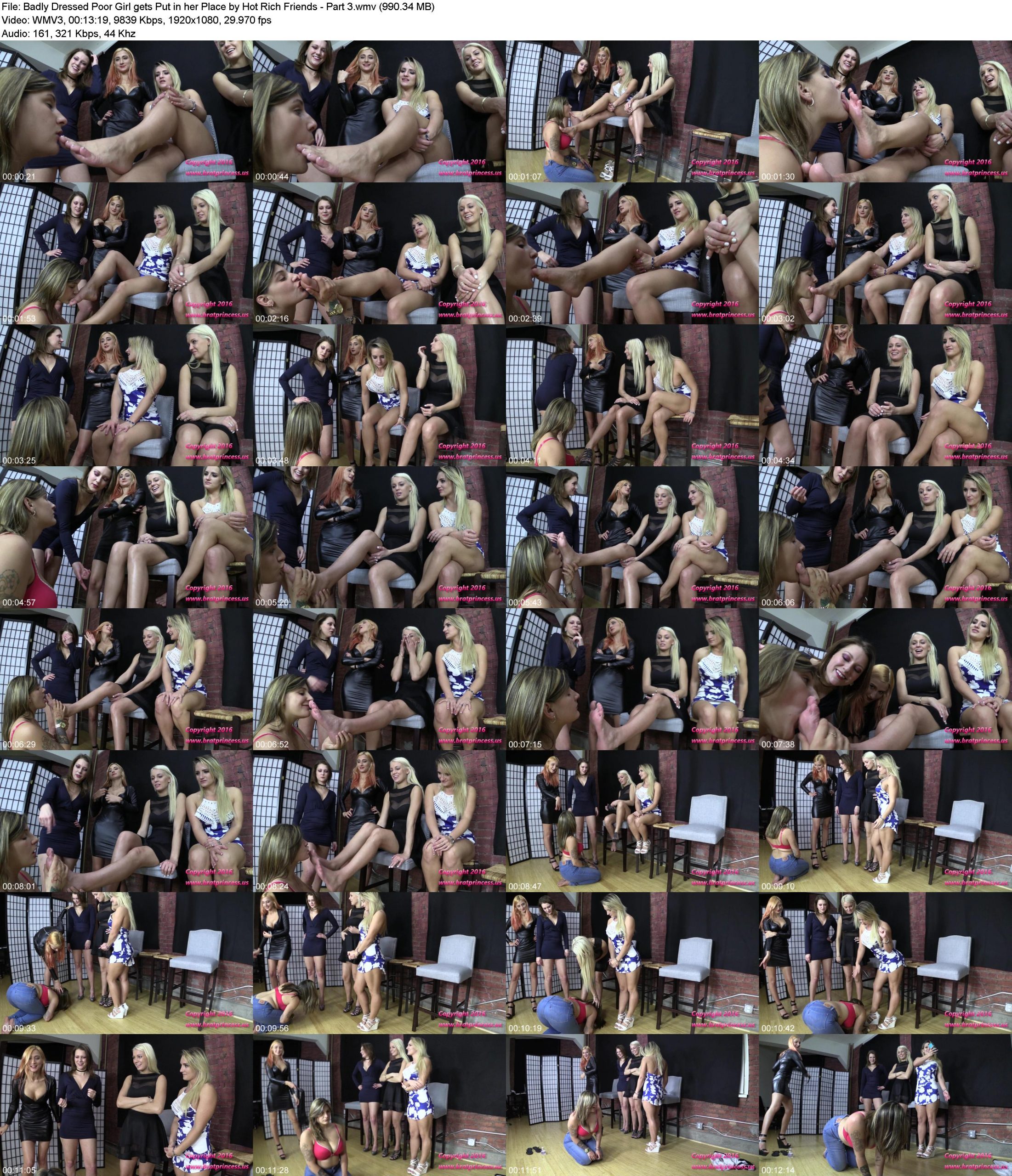 Amadahy, Cali, Kendall and Kenzie are ready to go out. They are going to be the hottest girls at the club. Their group hotness totally Dominates. They arent going to have to pay for drinks or entry because they all look so sexy. Everyones ready to go, except for Devon. Devons late, as usual. Shes always late to gatherings because she doesnt live in the city. She lives on the outskirts and has to take like a bus and three trains to partake in chic cosmopolitan nightlife. Devon is poor and doesnt really fit in with her skinny, hot, rich friends. They would be really nice and let her at least borrow a dress or something, but Devon is too fat. She doesnt really have the money or the right body type to fit in. As expected, Devon shows up late and in a pair of old blue jeans. She looks terrible. Devons friends remind her that the club has a dress code. You just cant go into an upscale venue looking comfortable. If you want to fit in with hot, rich girls, its a responsibility to look gorgeous from head to toe. Devon doesnt match the group. She probably cant even get into the club. Devons friends agree to use their influence to help her get into the club, but only if she amuses them by worshiping all of their feet first. Devon does not want to worship her friends feet. Amadahy is forceful with her until devon complies. Devon worships Amadahys feet first. Everyone decides that devons terrible clothes should be burned. They strip devon down to her bra. When Amadahy is finished having her feet worshiped, devon gets passed to Kendall. Kendalls poor feet are already sweaty and sore just from wearing her sexy heels around the house. The Princesses take turns using devons large natural breasts as a pedestal for their tired feet. As devon worships all of her girlfriends feet, they totally humiliate her. They pick on her for working at a fast food restaurant, being fat, having ethnic hair, and riding the bus. After devon worships and kisses everyones feet, she asks again if she can go to the club. Amadahy tells her, no. She is still too fat and has nothing to wear. Amadahy tells devon that she will give her one more chance. If she can take some of Amadahys whipping, then she can come to the club. This is the very first time devon has ever been whipped. After just three strikes to her back, devon says she cant take anymore. Amadahy agrees to flog devons butt over her jeans instead. After devon takes the rest of the whipping on her butt, Amadahy reveals to her that she did not fulfill the conditions to go to the club. Amadahy wanted to give her ten hard whippings straight across her bare back, but she ended up having to do most of the whipping on devons cushiony fat ass. Devon cannot go to the club. Devon starts to cry as her friends leave for the club without her.
tags:lezdom fetish,lesbian domination porn,humiliation,foot worship licking