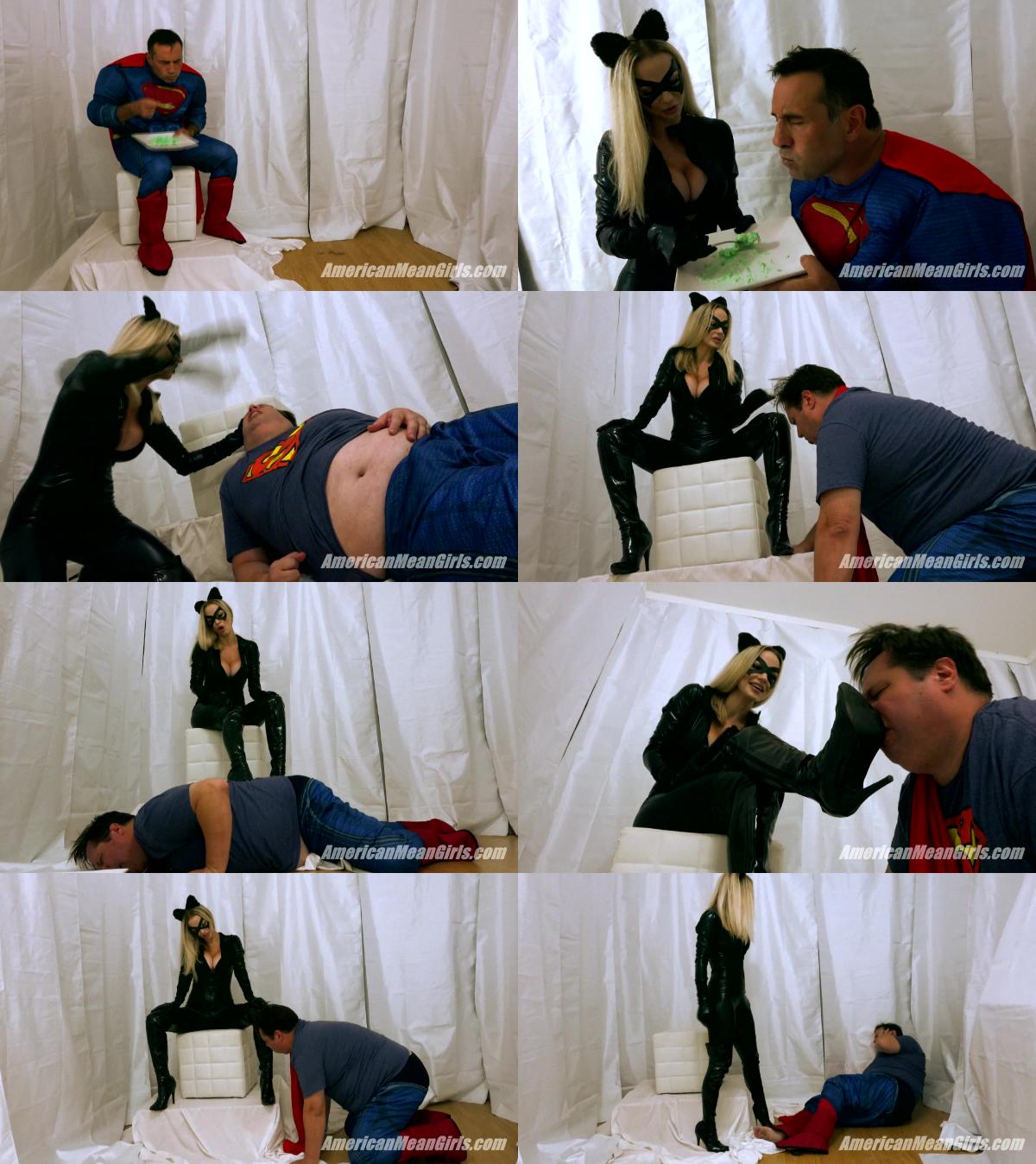 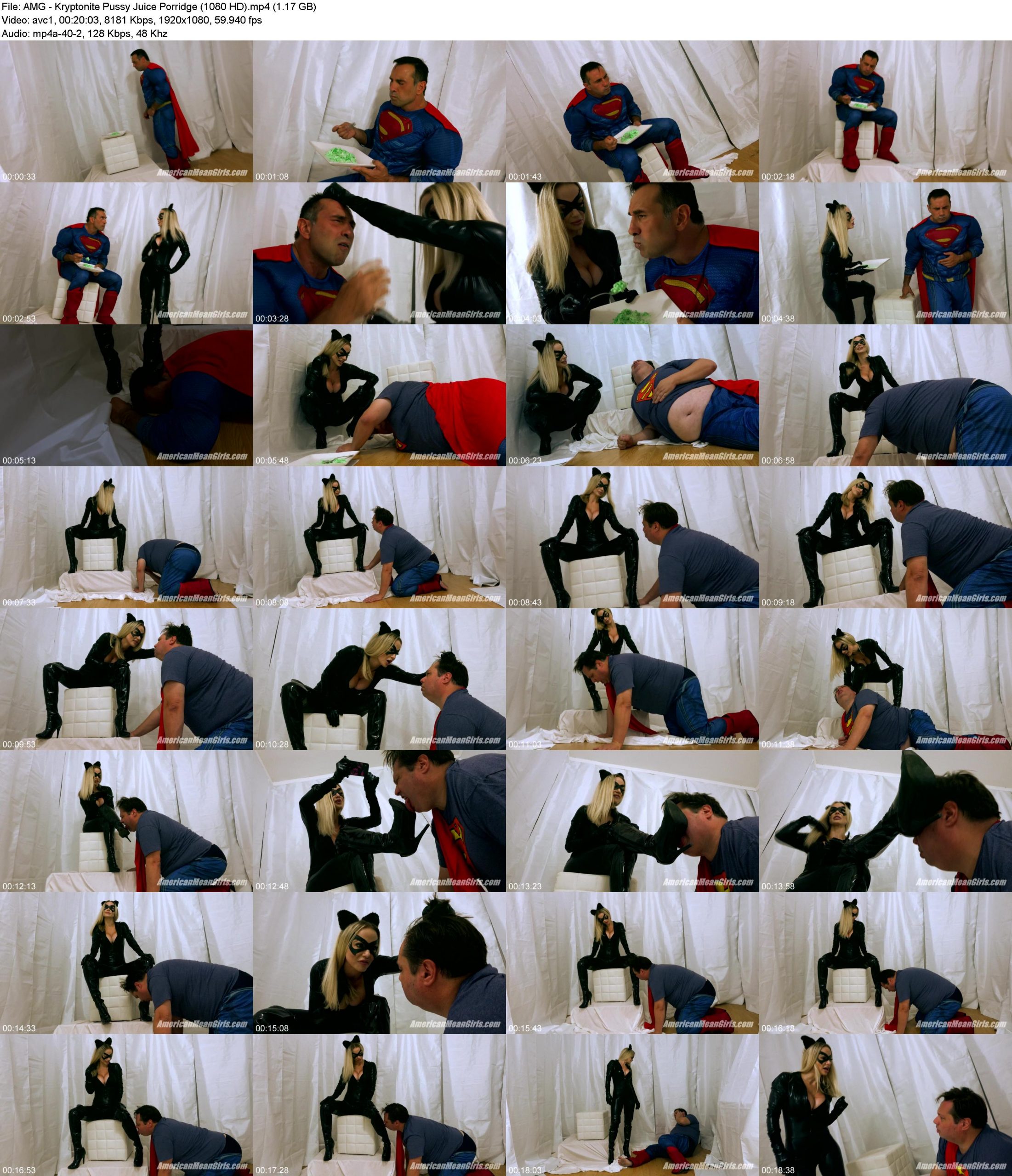 Cat-Girl has sneaked into Superman’s secret Fortress of Solitude. She has set out a trap for him- a deliscious concoction of a mysterious nature. When he returns from fighting evil, he can’t help but at least try this strange treat. After all, he is a bachelor and is hungry after all his crime fighting! After a few bites, he begins to feel rather…strange.
When Cat-Girl senses that her plan has taken full effect and weakened Superman, she boldly struts up to him and proclaims her victory. There is nothing he can do to stop her. He is so, so…WEAK. Cat-Girl laughs and explains her diabolical plan. He has been eating "Kryptonite Pudding!" And to make it completely irresistible to him, she had laced it with her own deliscious pussyjuice- which is known to be completely irresistible to ANY man- even SUPERman! So of course, he gobbled it all up- sealing his own doom!
As it absorbs into his system, he becomes weaker and weaker…at this point Cat-Girl can overpower him so easily that she simply grabs him by the hair and FORCE-FEEDS him the remaining Kryptonite Pudding- whether he wants to eat it or not!
At this point, our hero blacks out and collapses helplessly at the feet of this Evil Temptress. He awakens only to find to his horror that her porridge potion has…TRANSFORMED HIM! He is nothing but a weakened gelatinous form of his former self. Cat-Girl laughs and decides to toy with him…she cannot help but enjoy slapping around this former "super" man!
And Cat-Girl literally "slaps him around"! She bitch-slaps him across the face until he is actually begging her to "PLEASE stop hitting him" because it hurts him so much. Apparently her potion has INCREASED his pain receptors so the slightest slap across the face racks his body with immense pain! He literally cries at her feet begging for mercy and begging her to "please stop beating him"! It’s absolutely pathetic…and she LOVES it.
Soon, the "hero" is licking the evil woman’s boots, completely defeated and helpless. She has renamed him "Super Loser" and mocks him to his face. There is nothing he can do about it. he will live the rest of his life as her SERVANT- or else face the consequences!
She even laughs about what she has done to Batman! HE is apparently her slave as well! She fantasizes about how soon they BOTH will be her personal boot-licking lackeys! Cat-Girl even records "Super Loser" licking her boots so she can threaten him with blackmail, should her "Pussy Potion Porridge" ever wear off! Imagine the disappointment on all his fan’s faces if they were to ever tune into yootoob and see their "hero" groveling and licking her boots like this!
Oh this is going to be so very fun for her… Hmm…who is next to be enslaved by Cat-Girl?? She has an idea…and she explains how "Super Loser" is going to HELP her make it happen!
Category: COSPLAY
Related Categories: FEMDOM, COSTUMES, BOOT DOMINATION, FEMALE DOMINATION,superheroine porn,superheroines fetish
Keywords: goddess platinum,superman,cat woman