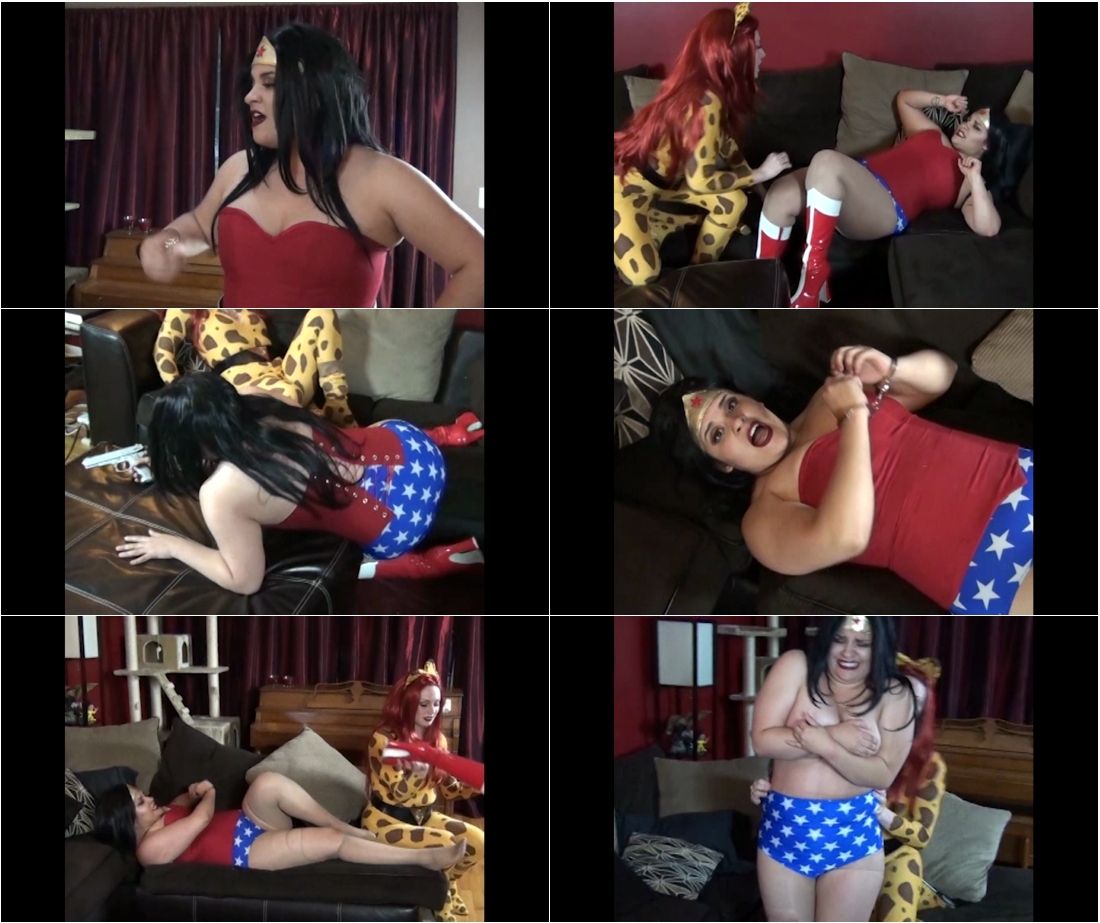 Wonder Jess arrives home from being mysteriously stood up by her lover Steve Trevor, only to find her nemesis Cheetah lounging on her couch. Wonder Jess realizes that Cheetah is behind Steve’s disappearance, as well as the theft of her own magic lasso and armor. Wonder Jess is not afraid of Cheetah and demands that everything be returned, but Cheetah is unnervingly confident and before long the two rivals are battling it out in Wonder Jess’s living room. Cheetah manages remove Wonder Jess’s magic belt and bracelets. She wastes no time shredding Wonder Jess’s costume and magic tights with her razor sharp claws. Wonder Jess tries to fight back but Cheetah takes the fight out of her with a few devastating body blows. Wonder Jess is still a powerful amazon though, and manages to turn the tables and starts clobbering Cheetah. But things are not all that they appear. Cheetah brought backup in order to even the odds, and her partner in crime Biff ambushes the amazon using a poison dart! With Wonder Jess weakened, de-powered, and handcuffed, Wonder Jess makes a plea to Biff to free her, arrogantly thinking she will somehow be victorious as always. But Biff isn’t willing to help her, content to watch her squirm helplessly in her cuffs. Cheetah is now free to complete Wonder Jess’s humiliation, by removing her magic boots and then stripping her completely naked, and Wonder Jess is powerless to stop her! As if that wasn’t bad enough, the villains then cast a giant net trap on the demoralized amazon and even rag her, leaving her helpless, naked and trapped in the net, utterly defeated and humiliated as the bad guys make their escape. Clip includes: – Superheroines
Adult Role Play, Boot Fetish, Cat Fighting, Catsuit, Female Fighting, Female Supremacy, Handcuff Fetish, Pantyhose Destroying, Spandex, wonder woman,
tags:superheroine,superheroines,lesbian domination,lezdom,story line ,storyline,froced orgasm,submission,humiliation,super hero, super heroines ,superheroines porn,superheroines adult movies,Super Villain, Superheroines,bondage,cuffs