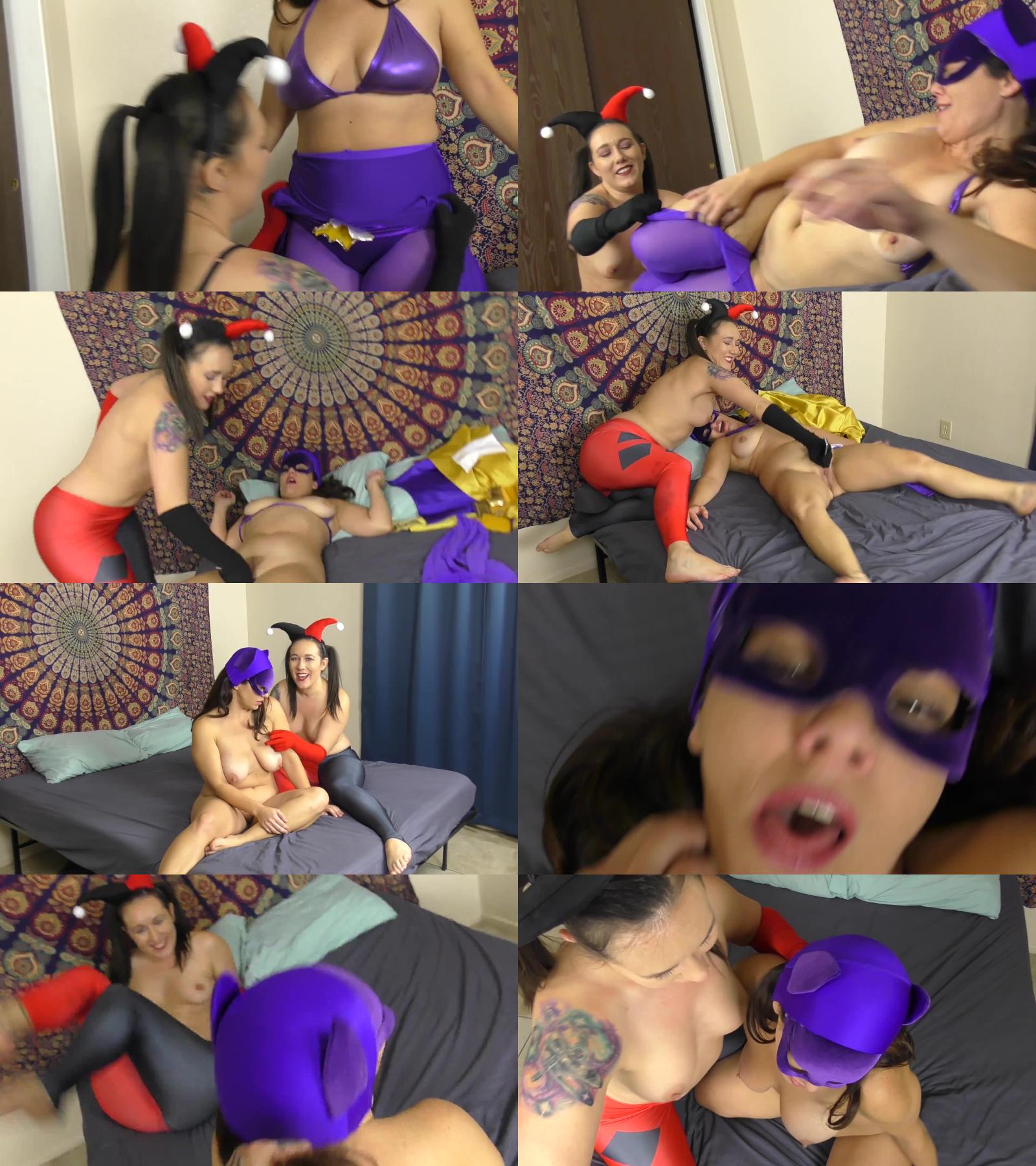 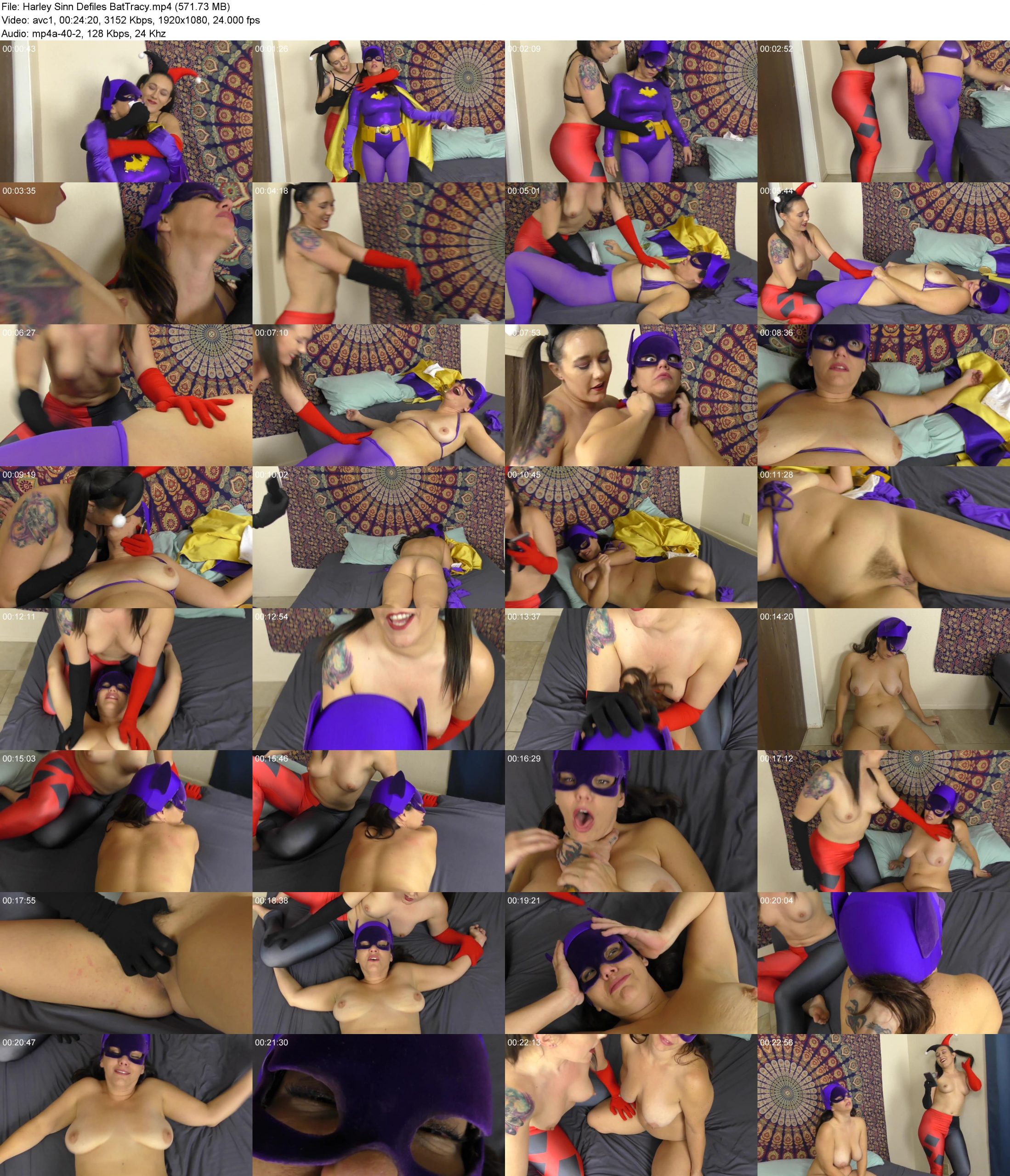 BatTracy has discovered HarleySinn’s secret lair. However, Harley was waiting for her and attacked BatTracy by surprise! Harley presses a sleepy rag against the struggling heroine’s face. BatTracy fights against it and breaks free, but not before the sleepy liquid has taken hold and BatTracy stumbles about in a daze. Harley now takes advantage of the weak bat and toys with her. She strips off her costume, spanks her and then Harley takes her own top off and forces BatTracy to suck on her tits and worship them. She then tosses BatTracy on the bed and gives her several punches to the belly and pussy to keep her weak and docile. Harley then takes pictures of the naked, helpless bat and puts them on the internet so she can sell BatTracy as a sex slave to the city’s most vile criminals. You then see several POV scenes of BatTracy’s sessions as a sex slave. Harley shoves BatTracy’s mouth onto your cock and she sucks it, moving her head back and forth while looking up at you with pleading eyes for it to stop. You get on top of BatTracy and watch her boobs bounce up and down while you fuck her. You bend her over and fuck her from behind while pulling her hair and spanking her ass. BatTracy tries to stop and refuse to let anyone else fuck her, but you give her 3 punches to the face and that puts her right back in line. Harley also gives BatTracy repeated punches to the belly while you fuck her to keep her obedient. BatTracy begs for it all to stop, but Harley and each criminal that fucks her beats her and keeps her in line. At the end of the day Harley checks her bank account and is surprised at how much money she made selling BatTracy as a sex slave. She tells BatTracy to rest up because she’ll be doing the same thing the next day! Harley has successfully defiled BatTracy. All the heroine can do is weep and hope for someone to rescue her.
Category: SUPERHEROINES
Related Categories: SUPER VILLAIN, POV, FORCED ORGASMS, BELLY PUNCHING, FEMALE FIGHTING.
Keywords: tracy jordan, battracy, batgirl, sinn sage, harley quinn, fight, sleepy, belly punch, pussy punch, sex slave, pov sex, forced tit worship, ass spanking, hair pulling, forced sex. tags:superheroine,superheroines,lesbian domination,lezdom,story line ,storyline,forced orgasm,submission,humiliation,super hero, super heroines ,superheroines porn,superheroine porn , superheroines adult movies,superheroines fetish,magic power,magic control,fantasy,lesbian sex,lesbian porn,lesbian bondage,,lesbian strapon,spanking,lesbian bondage,lesbian gangbang,slave,slavery,mistress,enslavment ,catfight,cat fight,,female fighting,ring wrestling,female wrestling,Scissors,catfighting,cat fighting,catfight fetish,catfight porn ,facesitting,mind fuck,mind control,hypnosis,Cosplay,Parody