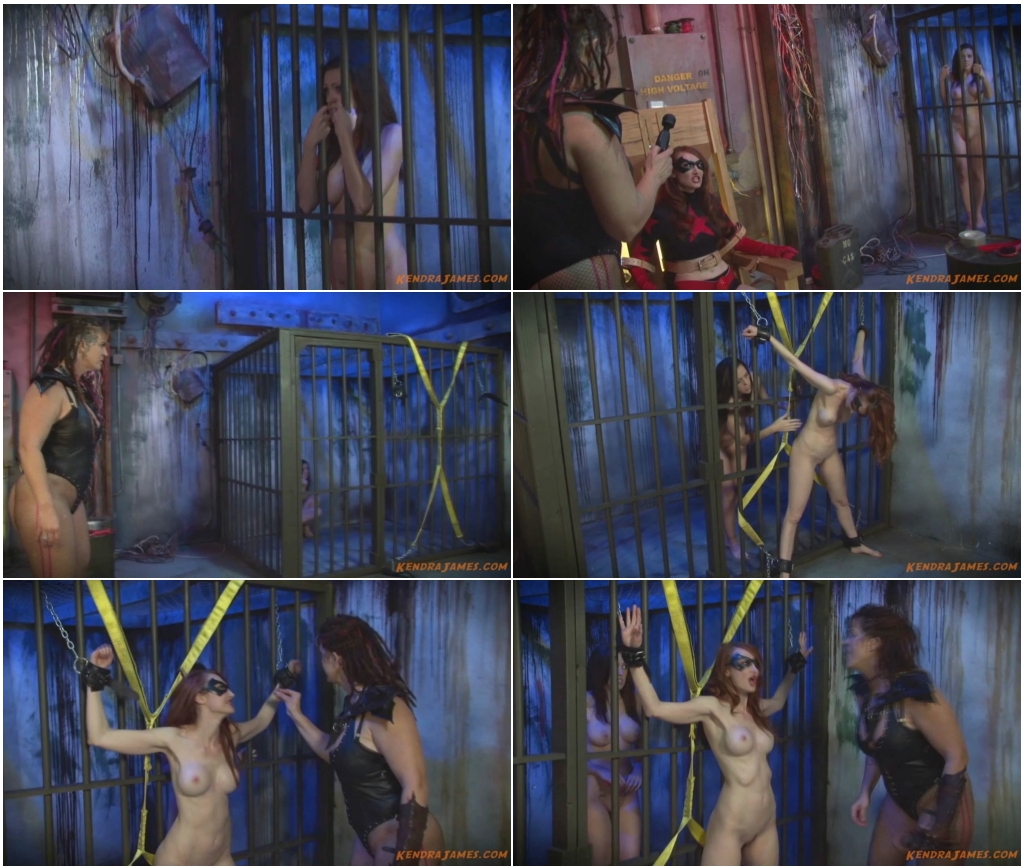 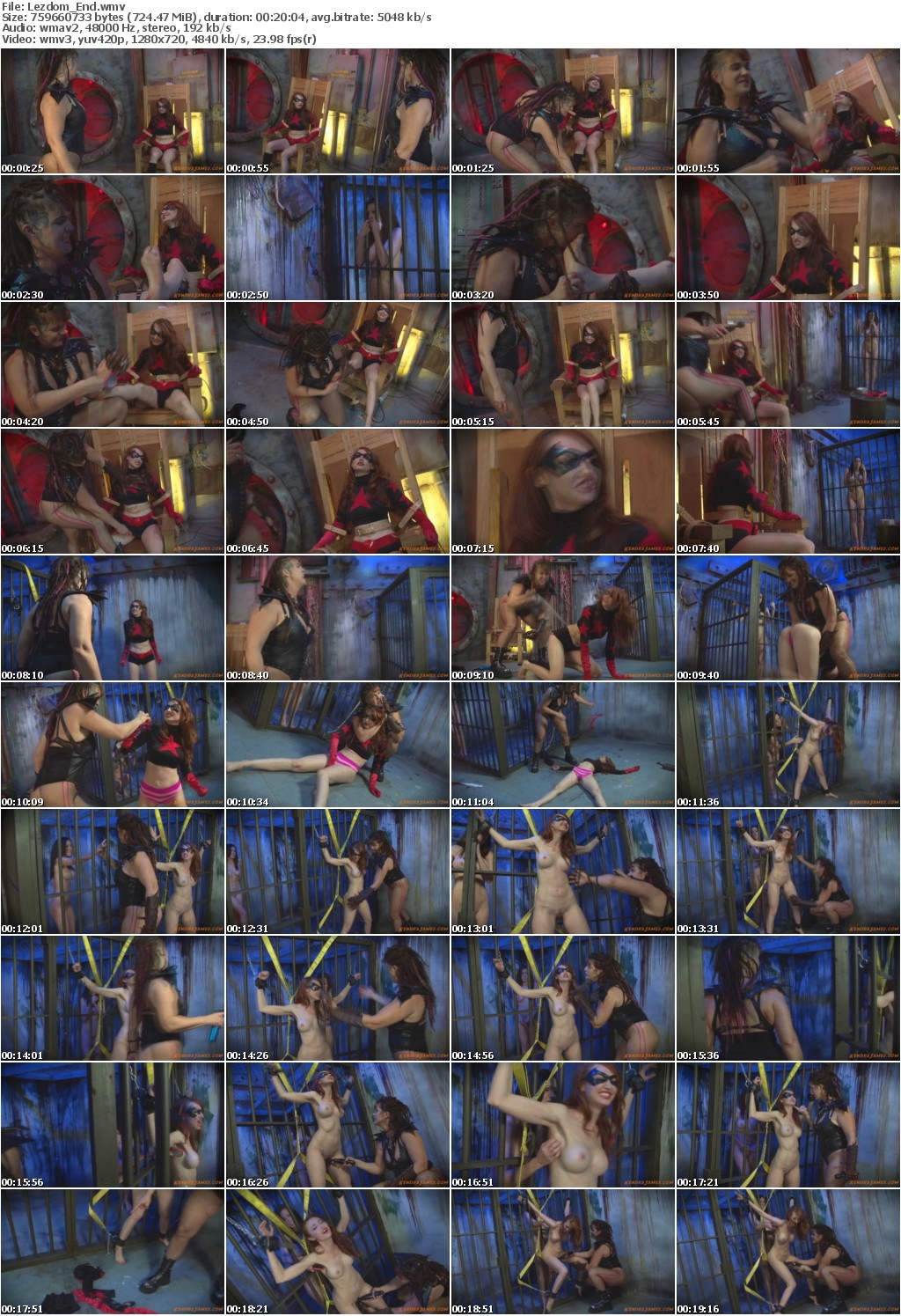 In an attempt to save the Chancellors daughter who’s been and brainwashed, Red Star has become a prisoner herself of the evil super villain Storm! The Russian super spy has been captured and bound to a wooden chair by leather straps. She struggles trying to free herself from the fiendish villains shackles to no avail. The beast of a woman enters the room and wants to know what information Red Star has about the secret plan to stop the massive Amazonian’s operation to take over the Russian nuclear missiles. She toys with the weakened hero, grabbing her ankles, removing her boots and tickling the bottoms of her feet mercilessly. Red Star screams with laughter despite her predicament and thrashes to loosen the straps and escape the tickle torture, but this proves futile. Storm is relentless in her torment and her evil plan is only just beginning. When she sees the tickle torment will not work, she retrieves her sub sonic vibrator and starts to pulsate the restrained hero’s pussy. Red Star screams in agony as she is forced to have a humiliating and degrading orgasm, but no matter what happens she will not let any of the secrets she knows come out. Storm becomes infuriated by the heroes fortitude and rams the vibrating weapon harder into the now dripping pussy of the screaming hero until she can take no more and Red Star finally from the relentless torture. Star leaves the room vowing to come back with something she is sure will loosen the heroes tongue.Once the villainous leaves Red Star opens her eyes and realizes this is her opportunity to free herself and the scared naked girl in the jail cell. Franticly the hero struggles from the shackles holding her as the imprisoned girl begs her to hurry before their beastly captor returns. Just as she has freed herself Star returns and swears this time she will take out the hero. Red Star has only recovered slightly but she thinks she may be able to beat the hulking woman in front of her. She throws a punch, but it’s caught in a massive and abruptly stopped. She tries to kick her foe, but that is deflected. Red Star has run out of options as Storm becomes enraged. She grabs the smaller hero and puts her in a bone crushing bear hug. Red Star gasps for air until the beast throws her to the ground. The hero tries to escape but Storm isn’t finished with this humiliating beat down. She strips Red Star to her panties and lifts her up by them almost splitting the hero into with a pussy cutting wedgie. Red Star screams in pain as the villain toys with her by continuing to lift and drop her by her bunching underwear. Tired of playing this game Storm chokes the hero into unconsciousness.Red Star regains consciousness only to see she is now stripped naked and restrained to the cage the naked girl has been locked in. Storm begins her torture once again, but this time she won’t stop until she’s retrieved the information she seeks or Red Star closes her eyes for good. The frightened girl in the cage is unable to resist the brainwashing Star has put her through and she begins to help the massive woman torment the only person that could have saved her. As the super spy hangs by her wrists with her feet barley touching the ground, the devilish hulk rips the spy’s mask off revealing her face and then thrusts her pulsating information extractor into her pussy. Screaming in pleasure and pain Red Star finally can take no more and she blacks out from the excruciating forced orgasm.
super heroine, super villain, bondage, tickling, tickle torture, foot fetish, foot tickle, unmasking, boot removal, wedgies, KO’s, knockout, choke out, fighting, hand over mouth, bear hug, forced orgasm, brain washing, armpit tickle
Category: SUPERHEROINES
Related Categories: BONDAGE, TICKLING, LESBIAN DOMINATION, FORCED ORGASMS, AMAZONS Keywords: wedgies, knockouts,bondage, humiliation, forced orgasms, slyyy, tickling orgasms, damsel in distress, domination, superheroine, foot tickling, peril
tags:superheroine,superheroines,lesbian domination,lezdom,stroy line ,stroyline,froced orgasm,submission,humiliation,super hero, super heroines ,superheroines porn,superheroines adult movies